Microsoft Windows Sound System (usually abbreviated to WSS) standard is supported by wide variety of DOS sound libraries, though its support is much rarer than Sound Blaster, Gravis and Roland series.

Concerning earlier DOS epoch, WSS was supported by part of DIGPAK library games, and by some of Accolade and Sierra Online games. 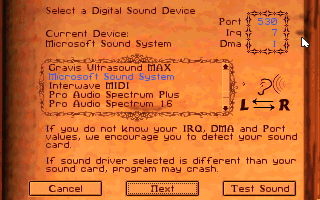 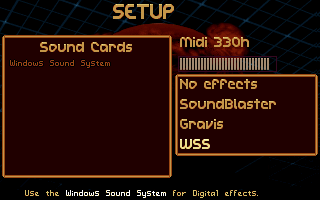 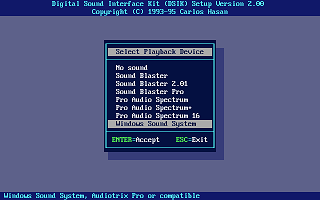 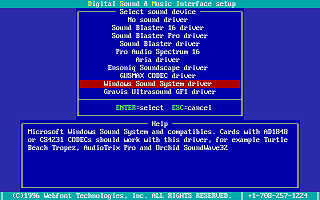 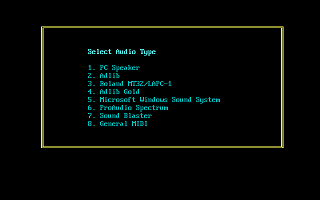 Any more appropriate place for this? Marvin maybe? I'm afraid the article will get lost there in a day.

Whatever, definitely not in Release Announcements. It's a forum, of course topics get lost...

So, any mod can move it please?

Some WSS cards have SB emulation TSRs however, though those tend to be very finicky. I know Diamond and Turtle Beach had WSS cards with such a TSR coming with their Opti/Crystal Semiconductor-based WSS cards, and therefore can cover Doom, Duke3D, etc..

Thanks, leilei, for help "steering" it to Marvin! 😁

The original WSS is the AD1848 codec with an OPL3 next to it. No other bus interacing logic. Does CD quality 16-bit at 48kHz.
Many other soundcards use the AD1848 chip or the superior Crystal equivalents CS4231/CS4248. But they do come with another bus interfacing chip in between. This interfacing chip can be of brands like OPTi, Aztech, Crystal, Yamaha, Ensoniq, C-media and Mediatrix. I have examples of all of these, except OPTi+Ensoniq. The ones I have are Sound Blaster Pro compatible in hardware, without TSR. They usually use the same interrupt for both WSS and SB-Pro. Sometimes they get stuck in SB-Pro mode, Crystal supplies a small DOS tool to reinitialize WSS mode.
Software support for WSS is mediocre, but allows for superior sound in Windows, MPXplay and some late DOS games (Miles Sound System). Games like tyrian expect the WSS to have its resources set to the classic configuration, like DMA 0 + 3 and IRQ 5. Allegro WSS support is listed but not working.
Protected mode 'Miles Sound System' games can have the WSS driver implanted, by replacing the SB16 one for example. I did this with System Shock.

The CMI8330 Sound Card is different then others, because it is compatible with WSS and SB16, with separated resources. Like two soundcards in one chip.

I'm so glad that there is more info on this card...it's a little difficult to find.

Thanks to bristlehog for starting this topic and to everyone for all the great information!

I have two of the Windows Sound System ISA cards and originally bought them to include in an exclusive Win 3.1 setup. I believe that I found the correct drivers but have not had the chance to try them out as I have not built my Win 3.1 system yet.

I know there are German version Compaq drivers on vogonsdrivers.com, but does anyone have the English version Windows 3.1 drivers? How about the original documentation scans as well? (I know that's asking a lot, but it doesn't hurt to ask).

Also, does anyone here have experience using the Windows Sound System card on Windows 3.1?? (not in DOS mode of course)