Shot some footage wit VersaVideo this morning, then this evening I've been going through stuff for e-bay. Also realized the FPU I bought for the Compaq is the wrong one (DOH) - should look for a 20MHz 386 SX FPU or something similar methinks, not the 4C87DLC (rolls eyes). Also decided to put the PC Chips up for bids (M590) since I'm trying to focus more on the systems I have than building more at this point, and if the board has issues, someone else may have more time to work on it than I do at this point. Also putting a bunch of cards n stuff up there as well.

Years ago I got a free 50 inch (52?) and after messing with it, I saw that the LED bar stopped working. I took it apart very carefully and ordered a whole new set (12 sections) of LEDs - upon receiving them, I decided to see where the break was. Yeah, I could have bought just one section for a 10th of the price. No way to know that though without a complete set working - just like the old Christmas lights connected in series, pretty much. I had the TV in pieces all over any table I had, so the large screen diffusers and layers of polarizing film was laid out here and there, I didn't want to accidentally damage anything by having it open too long, so the whole LED kit was ordered. I kept the 11 good bars in case one ever fails in the future.

Tonight---- well tonight I messed more with the Blue Lightning, and I got the Iomega DittoMAX to recognize the high speed controller card in DOS! I know it works in WIn 98 because I made a data recovery rig using that device a couple years ago and successfully pulled data off a number of tapes for the client, but now it doesn't seem to want to do anything but not recognize tapes (it actually ate one) and crash the system. When it goes to format the tape, it does a tape position test and then crashes. Some research indicates that there's no way of assigning it an IRQ, DMA and address, which aside from 370h address interfere with other things. I'll see how it goes in Win 95 when I get to it. At the very least, it's not just a decorative piece in there 😉

I think I'm gonna take a break from non essential stuff on it and figure out the soundcard issues, maybe extend a partition or create another drive with SCSI2SD - that way I can get the cover on it. I'm very apprehensive of my 3 year old going down to the basement and messing with it - he loves putting my screws into the proper bin and handing me JB weld and screwdrivers when he's there with me. I gotta cover the PS/1000 ASAP! Then I can do all the software configurations, even play some games with him 😁

Bought dozens of old laptop processors just because I saw one Athlon XP-M 2500+ in the picture. In the end there was two of them and also couple of PIII-S tualatins (1.26 + 1.4) for my surprise.

Also found one S754 Turion 64 so I was able to test S939/S754 combo mainboard I got for free some time ago. Intel socket 478 cooler fits nicely in the bracket and takes contact to silicon. Proper S754 cooler left hanging too high due to bracket fasteners. I don't own a S754 build yet so this will become one.

Someone please show Putin how to play Warcraft.

I spent some time this weekend installing, and then re-installing OS/2 Version 2.0 (with Service Pack 2) on my Retro Overkill Pentium 4 system. Here are the specs I used:

I know OS/2 can get pretty fiddly, but Version 2.0 seems to be about the worst. It doesn’t have any CPU speed issues with the drivers, but the kernel fails to boot every other time from the install floppy and about once in 5 boots from the SSD. No worries, I just keep restarting the system until the kernel boots. It also refused to format a 2GB partition with HPFS (and FAT for that matter) during the installation process. I ended up formatting the 2GB partition with DOS 6.22 first, and then installing OS/2 to the drive without formatting the partition it again.

I still need to install networking and TCP-IP (even if the best I could do is FTP with it). I also need to figure out how to get the SB16 working in a DOS box. So far, I initialized the SB16 in a DOS session, but programs (such as Doom and Epic Pinball) crash when starting their sound drivers. Oddly, if I use the PC speaker for sound FX, I can get General MIDI to work in Doom.

I’m also a bit disappointed that the version of Windows 3.0 that came with the OS/2 install disks doesn’t include any Windows utilities, including File Manager. It’s almost useless. I copied the utilities from a Windows MME installation into the WINOS2 directory which helps a bunch.

I will say that OS/2 runs really fast on a Pentium 4. I also found IDE CD-ROM drivers on virtuallyfun.com that work really well with both of my drives. While I installed from floppy images and a Gotek, I bet it could install from CD-ROM a lot faster if I made a directory for the hard drive style installation and copied the files to CD. Maybe I’ll play around with that next.

Does this count as a retro activity? i finished building this ar15 the other day. Its a design back from the late 50's 🤣

Setup some more e-bay auctions for stuff. Finally thinning the herd. I'm going to keep going till I run out of boxes or feel like I've minimized enough. Not doing systems for awhile though.

Looks like the AMD K6 on that motherboard won't fit the NEC Ready 9522 (socket 5, not 7 - missing a pin), so going to look at some other upgrade CPUs for that one to see if I can push it to the limits.

Going to pull out and setup the P4 for the 1st time in ages. Finally have a not dead PCI wifi card, and a spare vga input on my monitor. Pics and a thread on the Pheonix coming to life for a 4th time maybe? Stupid board just wont die.

Bought dozens of old laptop processors just because I saw one Athlon XP-M 2500+ in the picture. In the end there was two of them and also couple of PIII-S tualatins (1.26 + 1.4) for my surprise.

Also found one S754 Turion 64 so I was able to test S939/S754 combo mainboard I got for free some time ago. Intel socket 478 cooler fits nicely in the bracket and takes contact to silicon. Proper S754 cooler left hanging too high due to bracket fasteners. I don't own a S754 build yet so this will become one.

ASRock made all those weird but good motherboards back then! Always nice to see.😃

Today I sort of tested some of my recent finds.

1. A Trust PS/2 optical mouse and the vintage market Rage Pro Turbo.
My AGP test bench booted, Windows 98 SE set up its built in drivers, reboot, and now within a minute after Windows boots it freezes. No matter if I disconnect the mouse or replace the graphics card. My guess is that something broke the Windows. The system was already unstable when I was trying to game-test my Savage 4 Pro a couple of weeks ago. Otherwise the mouse works fine and the Rage Pro Turbo posts so I take this as a win.

2. The turn of the SB0220. The AGP test bench boots with it, adjust the drivers I've installed for the SB0060. The sound card is detected correctly, but because of the system's instability, no further tests were done.

3. The 2x256MB DDR RAM. The test bench boots with either and both of them.

I think tomorrow I'll re-flash the CF with a fresh Windows 98 and give another go for the cards. 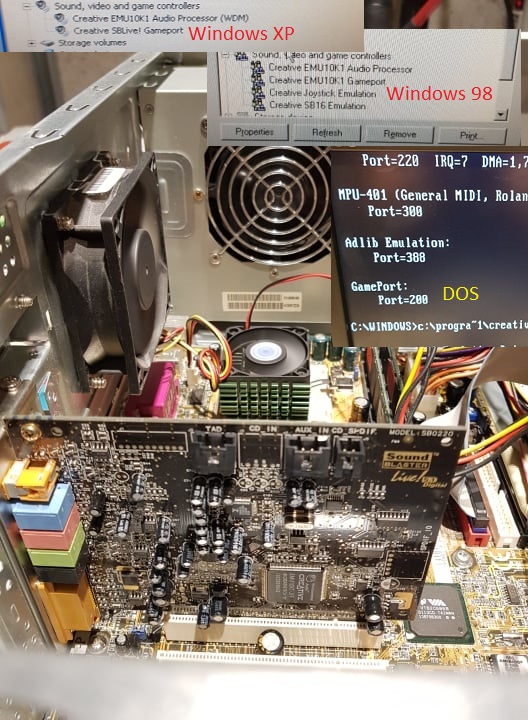 I also retrobrited a keyboard (it was sunny today) and it came out 10x better than it was.

Straighten the pins of a least half a dozen Tualatin Celerons and Pentiums I had lying around.
Tools to use:
* spare slocket adapter
* mechanical pencil with metal tip (Rotring Tikky 0.5mm)

That's one of the best tool to use for straightening pins on a CPU. Wonderful work, man.

Not retro as such but the old girl I use as my daily driver needs a bit of TLC after her PSU shit the bed so Ill be doing that after which I have a AT box that needs a system put into her.

Daily driver is a Threadripper 2950x with a 2080ti so its pretty heavy on the old Angry Pixie maker, this will be its third new PSU so this time ill be stripping the LED fans and controller out of it .. not sure if the Corsair LED controller is fully kosher, if it kills another I might just switch to using the money maker as my daily machine and retire this one to the basement as a file server.

And yes as weird as it sounds this Aussie house has a small basement 🤣. (For the ones not in the know, Australian homes dont have basements normally or attics)

Edit - 3 Hours later and the 2950x is once again happy, cool, quiet and more importantly dust bunny free. Put a Dark Rock 4 Pro TR4 on it and removed the failing AIO, shame its an Enermax or I would have tried to flush and refill it but its an Enermax TR4 and it'll be full of corrosion and algae so to the bin it goes. New PSU in too, nice 800watt Seasonic Prime Platinum.

Dropped Core temps on CPU from ~50c Idle to 38c Idle...yup that AIO was shot to shit glad I replaced it now before it failed totally.

Oh and its LED free now too, no more lovely red glow but the LED controller was likely the culprit for killing the other PSUs.

I use a thin knife to get pins mostly straightened, then blunt tipped syringe needles of various sizes (depending on size of pins) to finish the straightening if needed

I use a thin knife to get pins mostly straightened, then blunt tipped syringe needles of various sizes (depending on size of pins) to finish the straightening if needed

Credit Cards works nicely too, the only pins I hate trying to straighten are LGA socket pins ...need a loupe and micro tweezers for them.

I wanted to buy just the desktop case, but when the seller showed me what's inside I've decided to buy the whole PC. It's Asus P/I-P55TP4XE with that rare Asus Media Port and I decided to make it the base of my Pentium 1 build. The mobo didn't pass the boot test, so I extracted all the chips, washed carefully and tried once more. It made beeps and it's alive! And luckily I've found the 256 KB of COAST cache at one of the shops. So I'm happy to have such a nice thing. I'm considering the Pentium MMX Overdrive option. Or maybe will put original P166 (now it has P100 for test).

Another nice achievement is increasing the VRAM size on my VLB videocard from 1M to 2M. I had only 1MB of video on my Alliance ProMotion DSV6422 and wanted expansion so badly to have 800x600x24 bpp. Now I have this closure!