Not much lately... been busy with the house... otherwise I've been lurking at the eBay and locally for some stuff... like I don't have enough 😁

Had another check through some 5.25" floppies that I'd backed up and was happy to find a working copy of Borland Reflex 1.14 (only missing the help files & installation program). It's quite primitive when compared to version 2, but was nostalgic to use the version I used to use back on my old 8088, as I couldn't find a copy of that online. I was even able to look at some old documents made on it, including a database I'd made of old books that I owned - wouldn't have a clue where any of those where stored nowadays. 🤣

Additionally, I sorted through some old ISA I/O cards in my drawer. Going to give them a good clean and fingers crossed at least 1 of them will work in the 286 motherboard that's on it's way to me.

Confirmed that my Zip drive is dead. Not the click of death; it just stopped reading all disks at once with no real audio cues. If I CBA, I'll gut it to see if a belt broke or something, as I have an envelope full of belts I bought in the hopes of fixing the eject mechanism in one of my SVHS decks. It did not help. Ah well, the one in my $10 Mac still works, so if absolutely necessary, I could share that drive over the network, but I never come across used Zip disks in the wild.

Cooler swap on an Abit Siluro Ti 4200; the card came to me with a Ti 4400 BIOS and an 80mm fan mounted on the original cooler in the most barbaric fashion, ruining it pretty much. Now it's on its original Ti4200 BIOS with a new cooler. Charming card, I would probably use it in my Tualeron if I weren't such a huge fan of the Radeon 8500..

Checked the cache chips on all of my boards and ordered some 12ns ones - pretty steep prices if you do not buy chinese stuff. At least I now have a vague understanding of the chips required... although I do not know if a board that requires 32K x 8 as tags would do with 16K x 8... I assume it would(for <= 512KB cache size) but I didn't want to test my luck as I'm a bit giddy about running the SI5PI with two banks. Most likely a non-issue but if you're new to something one has to sometimes adhere to "comical rules".
On the bright side I got twelve 15ns ones for a few Euros... hope there's no catch.

Cleaned the cpu/heatsink and added some good thermal paste - setup ran all day with tighter settings... performance is pretty decent.
Still have to wait for the additional cache and buy 2x 32MB EDO sticks to successfully venture into "unknown territory".

My 286 motherboard arrived today, so I got to work testing it out. I had 2 spare I/O cards from a couple of old/dead 486 systems that I'd kept over the years. Not sure why I'm surprised, but they both worked perfectly on this motherboard. I added a Floppy Drive & spare IDE Hard Drive and was able to get set up on DOS, with the help of Ontrack Disk Manager to utilise the full size of the HDD, as the BIOS was a bit limiting.

It's not built into a case yet, but the spec as it currently stands -

Only played around with it briefly and played a few games: QBasic Nibbles, Bubble Bobble, Felix, Gorenju, Tetris, Blox, Viking, Orby, Diggory, Ranger & Connex. Many of those obscure games I listed are from my old dead 8088 PC, found them on 5.25" floppies years ago and they all seem to run nicely on this 286 (a couple are slightly fast, but not unplayable as they would be on a 386 or above). Once I've sorted a case and experimented with lowering the CPU speed to 6MHz, I'm sure some of these games will run even better!

I repaired the 10 voodoo 3 3000 that I bought a few month ago. They were missing some caps and even though they worked fine without them, since I'm not going to keep all of them, I feel better at fixing them properly before exchanging them. Some of them also have a rusty heatsink that I might clean as weel

Started building my 286 into an old AT desktop case (originally a 386 case).

The case was previously used for a Super Socket 7 motherboard, but as that board also supports ATX I may as well move it into a decent spare ATX tower case and use this battered old desktop for something a bit closer to it's actual era. 🤣

Hit a slight snag when getting everything setup, the Hard Drive was no longer booting. I had to FDISK & Format it, before Ontrack would even reinstall it's boot manager. Haven't got a clue why that suddenly happened, but it seems to be working ok again now albeit I now need to reinstall MS-DOS 5 all over again. If it gives me any more trouble I'll be putting a different drive in there, as I'm just waiting on a SATA to IDE adapter for one of my other systems, then I can salvage it's IDE HDD.

I have ended my C3 vs C7 article (and made a topic about it on vogons), rest of the day I was resting and watching phils youtube channel 😁

Went on a thrift store adventure today and got some games and a screensaver on CD-ROM for $0.99 a piece: 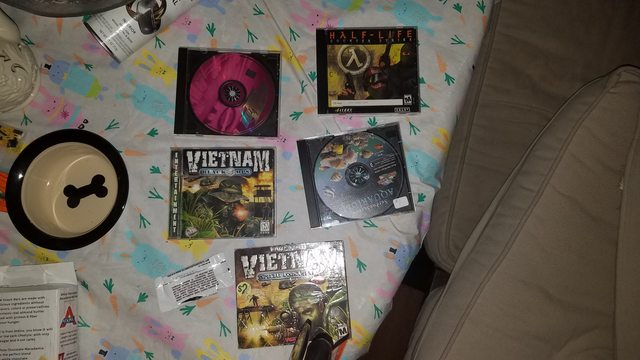 Also got an Imation LS-120 External Parallel SuperDisk Drive, brand new, for $11.99 and 2 Toshiba TV/VCR remotes (none have an eject button unfortunately) for $1.99 each. I saw an iMac G4 at the thrift store I got the CDs and SuperDisk Drive that had the mouse and power cord, and they wanted $199.99 for the system. That's way too much for a system like that and I can get one cheaper on eBay for crying out loud. If it was $29.99, I would've gotten it, but I would have to check to see if the system still works and what features it has (ex: SuperDrive).

Soldered pair of angled pins for HDD LED today. Mounting hole near isn't used, and straight pins would be colliding with ram slots.

I've already been through floppy hell just testing all these old disks I got with the IIcx, occasionally getting read errors, or - worse - the grinding noise of some less-than-reputable floppy disks leaving their magnetic material all over the floppy drive heads, forcing me to take out the drive and swab off the heads.

That grinding noise is something else isn't it? I have a couple of drive cleaning discs I can run. Combined with a bit of isopropyl they're pretty good.

Where can I get myself some of those cleaning floppies? I'm getting sick of constantly removing and swabbing drives.

And on that note, I might have borked the IIcx's floppy drive too, despite being as gentle as I could with my swabbing. Not only will it not read known good disks anymore, but it outright SCRATCHED some of the blank disks I was using earlier on the top side! Who knows how many other disks I could've damaged by accident like that in the floppy bin? I'm getting immensely frustrated with these old things.

Also, those weird "SCSI voodoo" issues are back. HDD indicator light blinks briefly every second instead of holding solid, but it's still throwing up the "where's the System Folder?" question mark diskette icon, and it doesn't matter if I have that SCSI scanner attached or not - or if I add this old external CD drive to the chain (which they conspicuously didn't include a Centronics plug SCSI terminator with, which isn't helping matters one bit).

I don't know why I still bother with this old thing. I feel like I'm better off archiving the 1.44 MB HD disks on my retrogaming PC instead, given all the problems I've been having with this IIcx board. Heck, if that system's case would fit my AWE32 in the first place, I'd test pairs of the other SIMMs in it.

I'm trying every possible way to fix my monitor that has connection issues with the red signal, often disappearing and showing ugly blue lines or flickering with a blue tint.

I've literally tried everything, from soaking the pins with isopropyl alcohol to pulling and squeezing the pins out to wiggling the cable, no dice. It worked well for a while after I pulled all the pins out, until it started acting up again.

I don't know anyone who can repair CRT monitors and I'm not skilled at soldering so I'm pretty much out of options. The last thing I'm going to try is to soak it once again with isopropyl alcohol and move the red pin wire in the connector to see if it makes a difference. If nothing will change I will have to search for someone who can replace the entire cable or just solder a new connector for me locally.

I bought an Slot A Tbird 700MHz CPU, which should work with my motherboard I believe (it's got an Irongate 751 chipset and the latest bios) but it doesn't POST, so I got annoyed and, throwing my toys out the pram, removed all the components from my retro PC case.

I swapped in my Socket A 2600+ motherboard, and installed XP. It failed a couple of times (not being able to find a file on the XP CD or coming up with any other error message), and when it did eventually load up something 'just wasn't right'; after showing the "welcome" screen in XP it was hang on a black screen with a movable mouse, it would occasionally just turn off. I thought my power supply would be up to the job as the motherboard has a 12v auxillary power input for the CPU.

So then I got even more annoyed and swapped in an ECS L4S8A2 with a P4 2.4GHz 'B'. This installed XP just fine after swapping around a few sticks of DDR to get as close to matching timings as possible and is actually stable and reasonably fast with 768DDR333 and a junky FX5500 and CMI soundcard I had lying around (probably going to drop in my 9600XT soon).

It has a nice "copper" covered heatsink by Nexus- were they any good? Temps are pretty low anyway at 33c in the BIOS after playing some GP4.

I like empty looking PC cases so this makes me happy.

I got an Olivetti M24 a few weeks ago, I took it apart this evening. I really like it, it is an early PC power connectors are screwed on the motherboard, lots of wires on the PCB.

It's working, the hard drive not though: The motherboard is upside down in the bottom of the case: And de-soldering this one was the prime reason for taking it apart at this moment. Complete disassembly was required to reach the underside of the motherboard.: Close call on that battery, nice save!

That is a very unique looking computer (at least compared to what I've seen over here). I like the speaker that looks like it's from and old Bell phone handset. And is that IR near the battery in the last pic?

sweet! I think I had something similar once. sweet little system!