I've been testing GOG Win9x games on my Win98 and ME boxes. Surprisingly, a vast majority of them work simply by copying the folder over. A few require some config file editing to update paths. And a few seem to have updated 32-bit executables that won't run on 9x/ME. Here's a list of the games so far that work with minimal fuss:
Arcanum
Baldur's Gate I and II
Deus Ex
Icewind Dale
Lands of Lore 3
Morrowind
Pharaoh Gold
Planescape: Torment
Return to Castle Wolfenstein
Return to Krondor
X-Wing Alliance
Syberia
Undying
Unreal Gold
UT99
Unreal 2
Wizardry 8

Might and Magic 6-8 all require a newer version of Windows.

Freespace 2, SimCity 4 and Ultima 9 all have other issues that I haven't figured out yet.

I am trying to repair two malfunctioning machines at the same time, a Tulip at compact 3 and a Philips NMS9100. Both have serious issues. I have ordered new parts to try and fix them, a new chip for the Tulip and new caps for the Phlips' PSU. I found out that ordering caps is a PITA, so much clicking and checking.

I found out that ordering caps is a PITA, so much clicking and checking.

I am not sure where do you live, but there's dozens of smaller or bigger sellers here in Germany that have a good selection of caps and shipping is around 5 EUR or less. Mouser/Digikey isn't the only option 😀
https://www.mikrocontroller.net/articles/Elektronikversender
Some of them even offer flat shipping fee.
I've also seen Amazon sellers offering recap sets.

I'm determined to make my Pentium 233 mmx as silent as I can. Took off the crap heatsink/fan and installed a much larger (athlon) heatsink only. Swapped in an earthwatts psu which is very quiet. Added a virtually silent enermax 80 mm front intake case fan.

Now the loudest component is the hard drive, which will get the boot when my ide/sd adapter arrives.

Spent ages trying to get the PC Speaker to sound louder (was playing commander keen) and in the end I routed the PC Speaker mobo pins to the TAD connector on the sound card so it now comes out my main speakers.
Doesn't sound quite as authentic as the sound that would have echo'd around an old case but at least I can actually hear it.

Started disassembling and cleaning the Roland SB-55 Sound Brush I got lately. Wonder if I can replace the dd floppy drive by a hd one...

This my first time ordering them, so it took more time now than in the future. There are a few variables when getting caps other than the uF. Like grid size, voltage, height and price of course. https://www.badcaps.net/index.php sells/sold kits. Once I get a bit more familiar with it I wil probably stock up a bit. I have a few motherboards and video cards that need new caps.

There are a few variables when getting caps other than the uF. Like grid size, voltage, height and price of course.

An of those extra variables, the most important items to equate when recapping a PSU or a mobo are ESR and Ripple Current, imo.

Well...
I did a swap with another fellow vintage hobbyists, from England, were he got a 5x86-133 chip and I recieved a Socket3 ISA board. The fun thing about this, is that it supports dx4-100's. Yet it is ISA only. This however does not affect the goal for my next build, that I have begun today.

The build will be an early adopters 486 machine. Everyone are going for VLB systems that have DX2-66's or PCI systems that have DX4-100's. And as I like to play differently than others in some cases, I will go and create something that would have been sold as highend, when 386sx33's were standard and something that represent my first computer. Or... As close as I can get it, some 25 years later.

The build will be a 100% ISA slot, 486dx33 system. I have not yet decided on 4, 8 or perhaps 16mb Ram. That will come.
Untill now. I have only decided on cards, found cache memory and found the CPU. Need to dig out a few more components.
I think I will name this machine, after one of my ancestors. His name was Gabriel Milan.
Or actually more accurate: Don Franco de Tebary Cordova. (born in 1631 and beheaded in 1689 in Copenhagen)
He was born in Spain, from a Portugese jewish family, and married the daughter of a fameous jewish scolar named Benjamin Musaphia.
The name of this build, will be based upon Don Franco or Milan or something like this.
Or perhaps based on the Virgin Island Saint Thomas, that he was one of the first guvernours on, during the reign of the Danish state.

Enough history... This is as far as I have come today.

EDIT:
Went through all my 72pin modules... I have like 9 modules of 16mb, 5 modules of 8mb and 7 modules of 4mb.
They all count up on this board, so I gave them a label for me to know what is what.

Well you could "do everything" a normal user would want to do up until 96 or so with 8MB but 16MB is nicer in windows 3.11 or 95 if you have thoughts of putting that on. 4MB wasn't that limiting until 95ish I don't think. By the time you really needing 8MB for games the DX33 is a bit of a slug for them. Fair enough if you wanna recreate Duke3D in postage stamp mode though.

Well you could "do everything" a normal user would want to do up until 96 or so with 8MB but 16MB is nicer in windows 3.11 or 95 if you have thoughts of putting that on. 4MB wasn't that limiting until 95ish I don't think. By the time you really needing 8MB for games the DX33 is a bit of a slug for them. Fair enough if you wanna recreate Duke3D in postage stamp mode though.

Well.... I am not going to do any Windows or Duke/Doom'ish machine. This is purely a machine, that would have been an "early adopters" machine of the 486 platform. So no duke or doom or Win9x on this thing. Even my 486dx4-120 does not run any Win9x or just Windows at all.

This machine is for 1989/91 games/software, and will be build for that specific time period.
I did after all explain that in my previous post. Nope... This thing is going to be build for Civilization and such games.
So the question is... Are 16mb 60ns way overkill, when I want to make a solid "1989, 1990 or 1991 expensive early-486-adopter"?
You know... Something a homeuser with a truckload of cash, would potentially buy in 1991.

I know some of the technologies might not have been around at that time (72pin EDO and chipset), yet I am thinking in terms
of overall spec's. There were after all 60ns memmory at that time. 256kb cache sounds high for 1991 as well.
I am more thinking in terms of, you know, numbers. I have to, as it will be nearly impossible to find a true 1991 high end pc today.
Have to cut at least some corners these days.

Started disassembling and cleaning the Roland SB-55 Sound Brush I got lately. Wonder if I can replace the dd floppy drive by a hd one...

Ended up replacing all caps in it, since they all badly leaked. Two traces were already damaged. Now all is good again. 😀 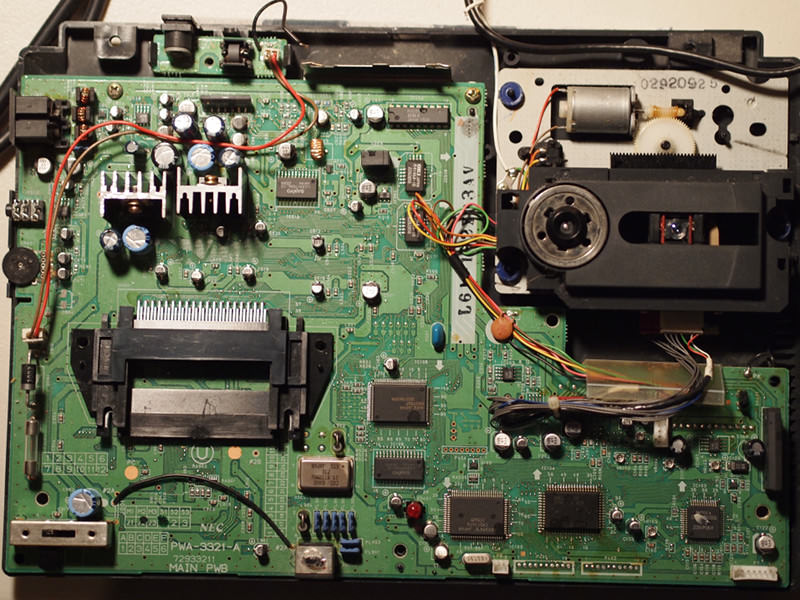 I took apart my Duo (I'm the original owner 😏) and checked it out with my new hdmi digital "microscope." The only leaked capacitors, and it's bad, are the ones in the audio amp circuit by the volume knob. It was so bad the a nearby capacitor fell off almost on its own. Luckily, the pads are salvageable.

I'm thinking about ordering this kit, but I don't know if they are quality capacitors.
https://console5.com/store/nec-turbo-duo-pc-e … md-cap-kit.html

It looks like they supply Panasonic caps which are some of the best on the market.

That's reassuring, thanks! I'll put in my order ASAP.

Awesome, Fuzzy. I order from console5 all the time. Luke is a great guy. Enjoy your Fireball.

Finalized the P133 build. Ended up removing the fan on the cooler - that thing works fine on.passive.

Only issue I have is the ES1868 card and Doom games. The cards OPL and Wave ia pretty clean and silent in all games however Doom does something strange. The card is initialized with ESSVOL for Master Volume 8, Wave 8 and FM ynth 8 but when I load doom it becomes exceptipnally loud with some distortion on OPL music. When I quit Doom and rum ESSVOL I see that Wave and FM Synth are both 14. Not sure how or why it overrides my mixer settings.

How about you create a new thread for GOG compatibility list so that your work doesn't disappear buried under posts about what people did with their retro junk?

I believe there already is one such thread..