I was browsing for 3dfx hardware on ebay and came across this Voodoo 4 4500. At first i though it was an obvious scam, but then after googling the model i guess it is real ?

Nice... Soldering are actually quite fun. 😀 Congrats on the job.

Those tapes might actually be okay but the read write heads on the tape drive are slightly out of alignment. Had that problem with a couple of code masters titles way back, everything would load except those unless the tape heads were aligned just so.

So, a follow up to my previous post regarding my efforts to downgrade a Thinkpad 760ED from an 1024x768 XGA display to 800x600 SVGA (maybe it will help that one other random person in the future who wants to try this, haha). Previously, I thought I had read that all that needed to be done to do this downgrade was to replace the LCD Panel and the video board together. However, that is most definitely not correct. You need to replace the LCD panel, video board and system board (basically most of the guts of the laptop, heh). My previous effort resulted in no image on the display because I did not replace the system board (still was using the original one from my 760ED model 9546-U9A... in other words, an XGA-specific system board) Thankfully I did get all of these replacement parts together. Once I swapped the system board out, it all worked (ignoring the BIOS errors, they were resolvable by actually reassembling everything and going into the BIOS once): However, there was still that bunch of distortion along the bottom. Spoke to the seller over the next few days and tried various things but nothing would resolve it. Seemed pretty clear it was damage on the LCD panel itself. Luckily he did have another one and offered to send it. That replacement arrived today. Not perfect unfortunately as you can see. But much, much better and for the most part I find I'm not noticing the imperfections when I'm actively using it. So I figure I'm just going to stick with this since he doesn't have any others anyway. Also as a nice bonus, swapping the system board nets me an ESS sound card (came with it, probably because the system board is originally from a 760EL) instead of the garbage MWave that was in my original board. Beautiful.

Now I actually think this laptop is my preferred DOS laptop over my Toshiba 430CDT, for two reasons: 1. I can toggle screen expansion/scaling on or off via Fn+F8 which is very convenient and, 2. I much prefer the keyboard. The keys feel a little nicer and I much prefer the layout. The main downside is that the bottom of this laptop gets hot. There is no CPU fan unfortunately.

I hate IBM's "FRU" numbering, but for anyone coming across this post who was curious about doing this type of downgrade, the necessary SVGA parts are:

Messed around some more with YouTube on old Windows/Browser. Went with Windows Media Player 6.3 this time for better codec compatibility with encoders available on ffmpeg. Significantly cuts down on the time required as shown in demos.

Properly searchable YouTube without having to give direct URLs, a "loading" screen instead of a waiting cursor and comments under the video. Video title, description, comment avatars not implemented yet. 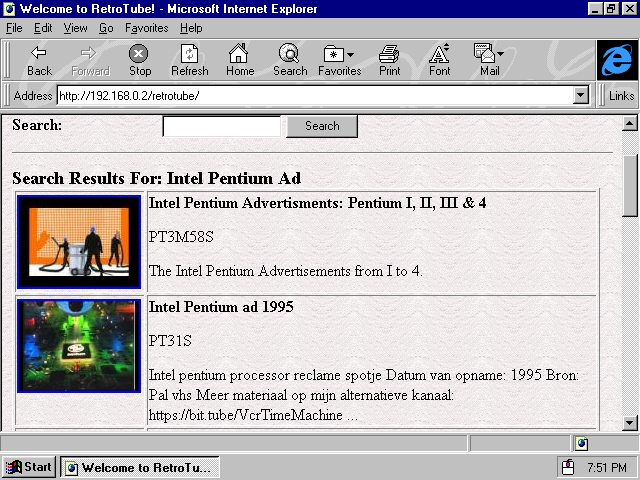 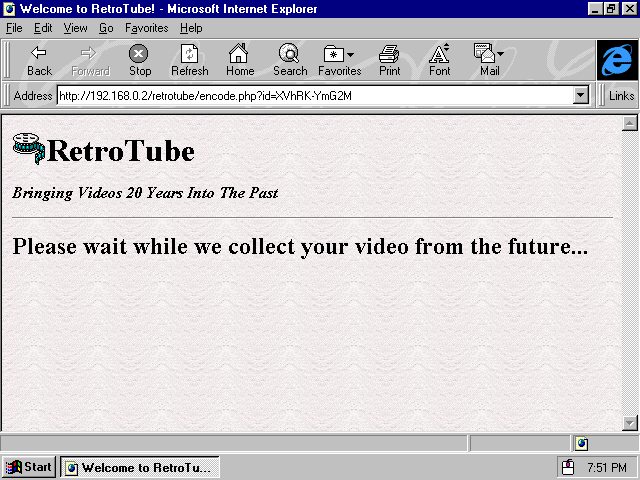 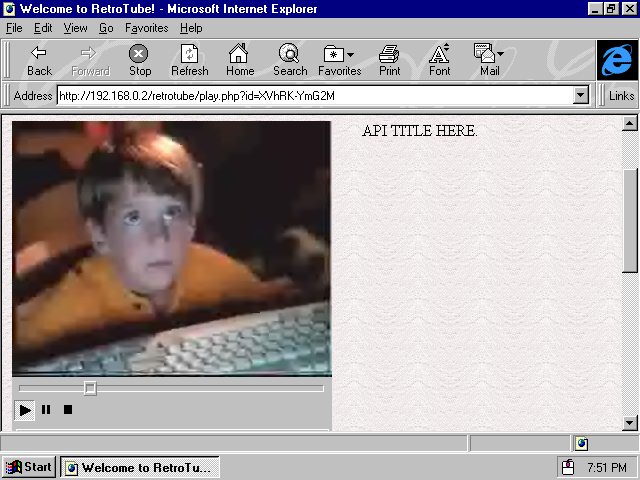 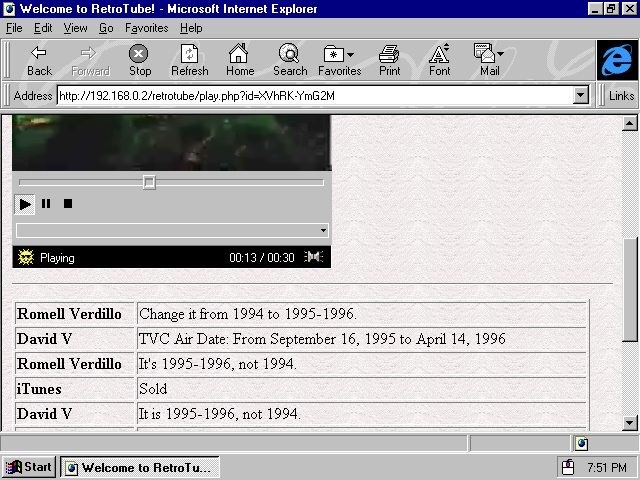 The only replacement substitution I ever made on a 760 series ThinkPad was to substitute the middle part of the motherboard triple sandwich, the Sound and Modem MWave board, for one out of an 760ED, which has an ESS soundcard and no modem.

IIRC, in addition to the system board, video board and ofc. panel, these machines use different BIOS revisions, depending of what type of display is used. IIRC there have always been two distinctly different BIOS version to choose from when downloading, one for the "SVGA BIOS" and one for the "XGA BIOS"

That is pretty darn cool to see that. What are the requirements to watch videos on there? I have systems from the 486 to Athlon 64 running Windows 95C to Windows 98SE. Also, is there a special software to use that translates YouTube.com to an older machine that has Media Player 6.3 installed?

Yeah, sorry if it wasn't clear from my post, but this is basically exactly what I did -- put the LCD panel, video and system boards from a 760EL/ELD into my 760ED (system board also had the ESS sound card as you mentioned, which is awesome). Working great now! But just had to go through two different LCDs to get one that was of acceptable quality. You're right that there were indeed two BIOS's for SVGA and XGA, and as you noted, there is a bunch of conflicting information out there on what hardware combinations you can do (the cause of the confusion I personally ran into).

Looks great. Sometimes a feel tempted to look for a C64, I have no experience with them and I don't think I even ever used one.

That is pretty darn cool to see that. What are the requirements to watch videos on there? I have systems from the 486 to Athlon 64 running Windows 95C to Windows 98SE. Also, is there a special software to use that translates YouTube.com to an older machine that has Media Player 6.3 installed?

I've successfully tested on a Pentium 75 machine running 95B.

I put a small demo with pre-rendered videos online, with all different encoders and codecs at different resolutions.

Feel free to give it a go and see which ones work nicely for you. All required software for different codecs & players are linked on the page if you don't already have them.

They've mainly been encoded to have YouTube playable on Pentium / Pentium MMX era hardware. It may work on 486, it'll certainly work on newer hardware just fine.

It can easily be scaled up to any resolution for newer hardware, since it's just ffmpeg encoding. It's simple at heart. YouTube API to get search results and video information/comments, youtube-dl to download videos and ffmpeg to re-encode them to friendlier older formats and then automatically present it in-browser. It'll be both online (with some limitations due to cost) and the software package freely available when it's completed to anyone who wants to run it themselves locally for their own retro PCs at home where you can give it whatever settings you want.

Today I saved a Trenton TR-P6V pentium pro board from the bin. I had actually bought this board 10+ years ago and it never worked right, the bios would hang and could never finish posting. Well, I stumbled across the board last night when i was goofing around in the garage and gave it another go.

Still had errors, but this time I was armed with a eeprom programmer, and sure enough, the bios chip was wonky. Not enough the system wouldn't post, but enough where it couldn't finish. So I contacted the people that made the board: https://www.trentonsystems.com/ and they were quick to respond and happy to provide a manual and updated bios. So in addition to the board now working properly, I now have a manual!

There still is a borked memory slot (or a bad simm) but I can fix that easily enough.

I'll post both over onto vogons drivers for the people that google sends here. Also if anyone has a TR-DP6 version of this board (dual cpu), shoot me an message as I'd love to get it from you.

@x0zm_, tested on my Pentium III machine, in IE 5.0 - all the ffmpeg ones all work great but the MS ASF ones stutter quite a bit, no matter what the resolution or bitrate I choose.

That's great the manufacturer provided support like that. Most people would have left it as a lost cause.

I am looking for a Display ribbon or entire display assembly for an IBM Thinkpad 755.
The ribbon is wind up in a coil and unwinds when you open the lid.
IBM solution for a laptop display.
The problem is that in time the ribbon coil rubs on the thinkpad housing and on itself and ends up getting damaged.
So now the thinkpad has distortion in the display.
at first I thought it was just the display so i was able to find a NEW display on ebay.
But the problem was actually the display ribbon.
I think the replacement part actually comes with the ribbon.
But I do not have a ribbon and could not find one for sale on ebay.

x0zm_ woah that is so cool, keep going 😁

You know your Kalok HDD is a girl, when you power it on and starts blowing a lot of pink smoke!

Logic board might've failed. I had hard drives that had black smoke come out when I would flip the switch on the power supply.

Set up Windows 98SE and all drivers on my Dell Dimension XPS D333; it works like clockwork so far. I only need to test my internal AWE64 to Montego Line Out routing and the Voodoo 2 I had to fix about two dozen bent and contacting pins on.. If all works out, it will be my daily driver 😀

Completely tore down and cleaned an old AT case and a Dell Dimension XPS D333 tower PC. I have also done a (near) complete restoration of the Dell, the only issue being one of the 3.5" expansion bays. The lower bay seems to require some kind of caddy device to install a floppy/zip drive in it? Mine is missing. I also lack the cover for it and standard covers don't seem to work, if anyone has one of these towers and could post photos of what needs to go into the lowermost 3.5" bay I would be very glad.

Can do.
Won't be until next week tho, work stuff before i can get my retro off again =)

Any chance you had time to look into this for me? 😀

Logic board might've failed. I had hard drives that had black smoke come out when I would flip the switch on the power supply.

Just one of tantalum caps. Drive wouldn't start, activating overcurrent protection in the PSU as well. Then flames and smoke started coming from under the drive. Those caps usually just pop like fire crackers - this time it was different. Now the drive spins up OK. I will just replace the caps on the board and see what happens.