Sigh.
It was not as easy as anticipated to get my 486 assembled.

Now I can finally close the case to do some DOS windows setting up.

Some photos, from the workshop: 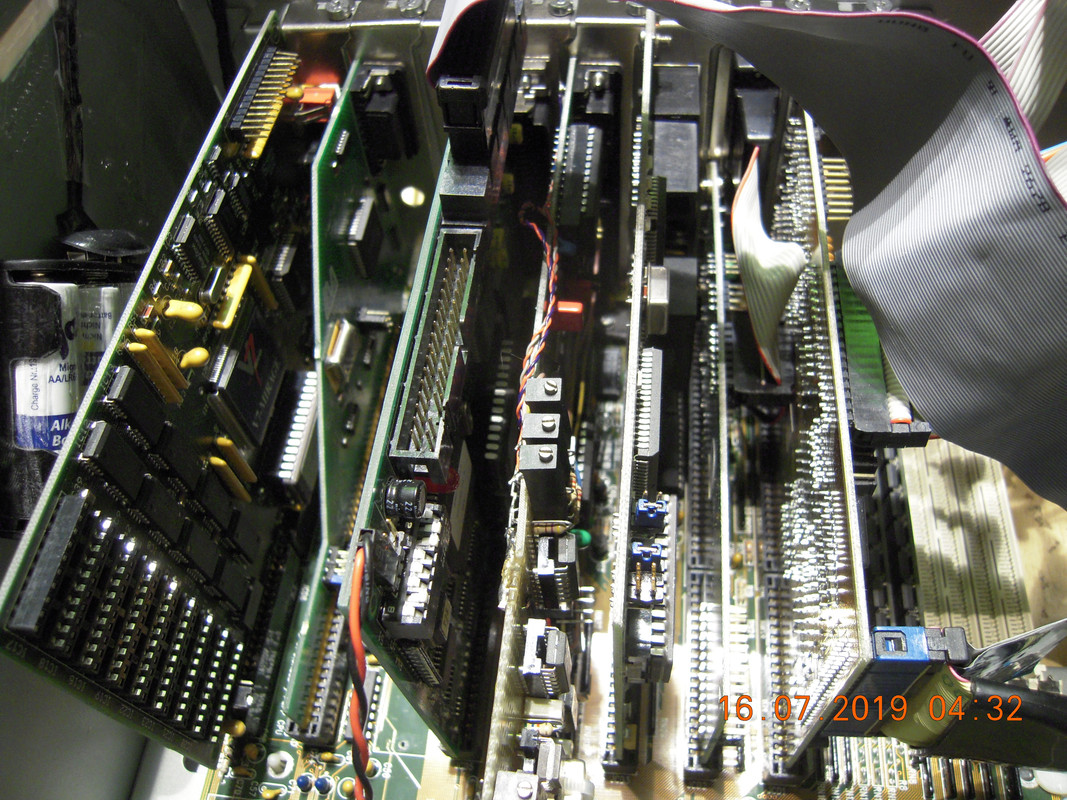 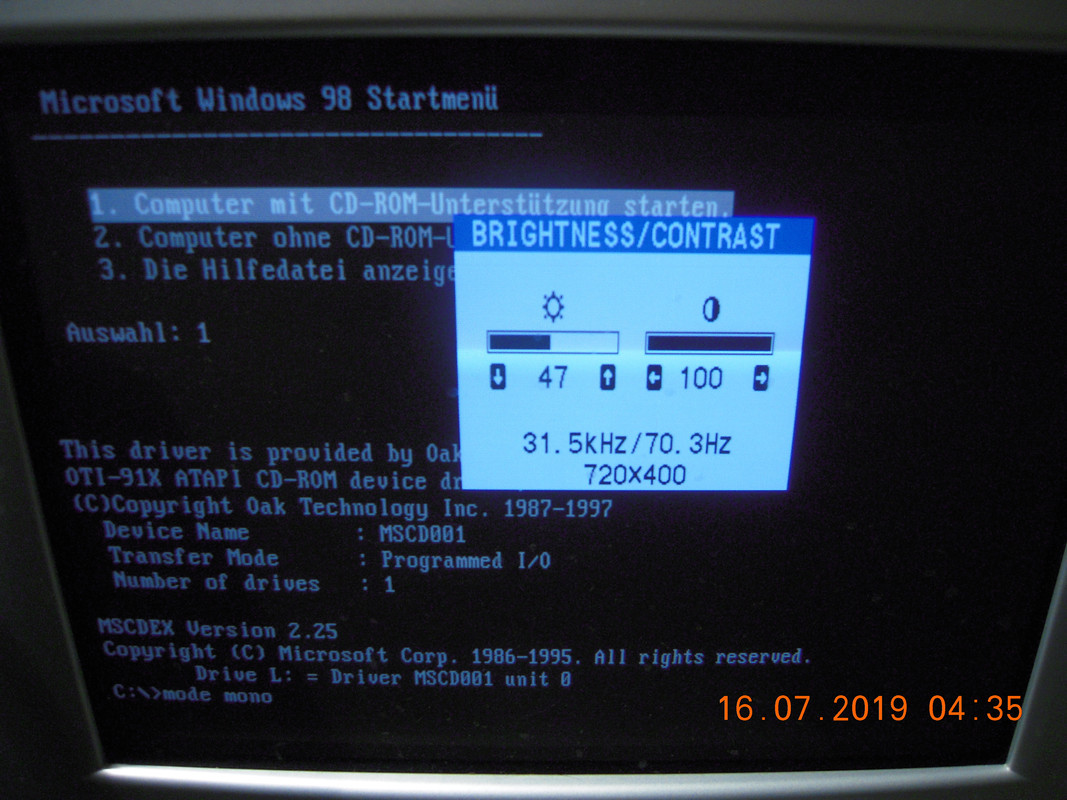 VGA output. Very sharp, as one can expect from 100MHz DAC. Will be of better refresh rate after installing the spea utilities. 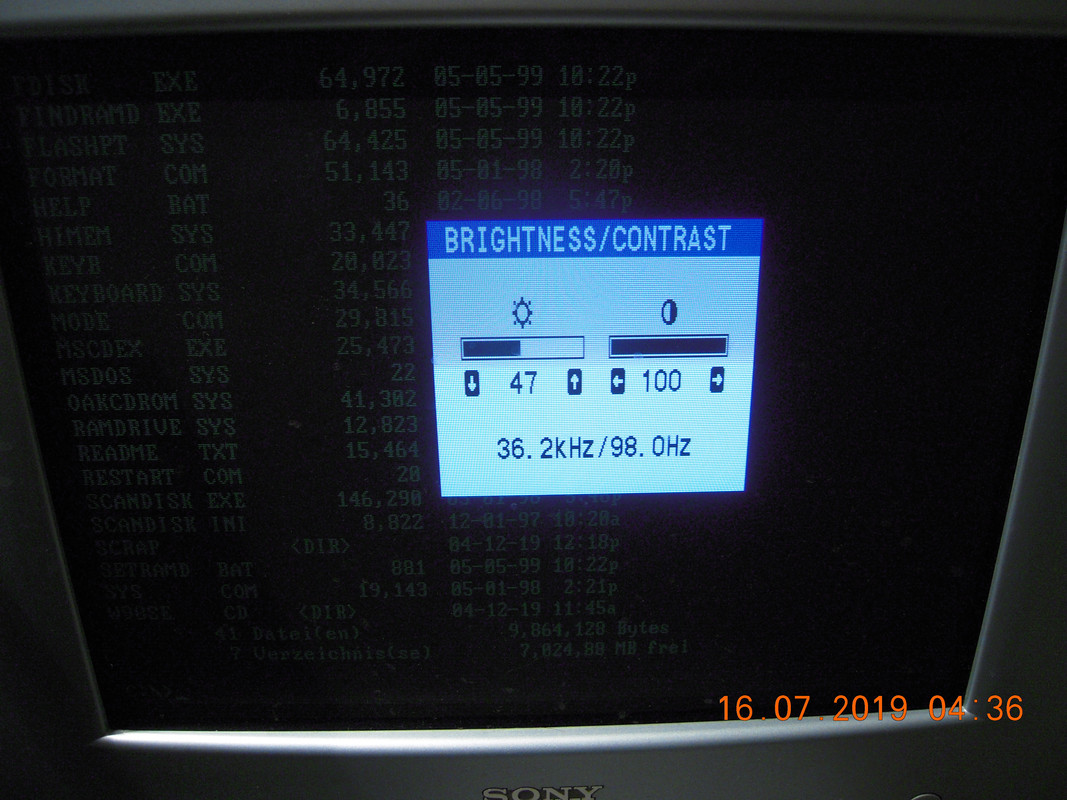 Hercules card output (rgb adjusted to my preferred bluish green).
(As its output is 0.7V max, it looks dark if the monitor is not turned bright. Will correct that some day) 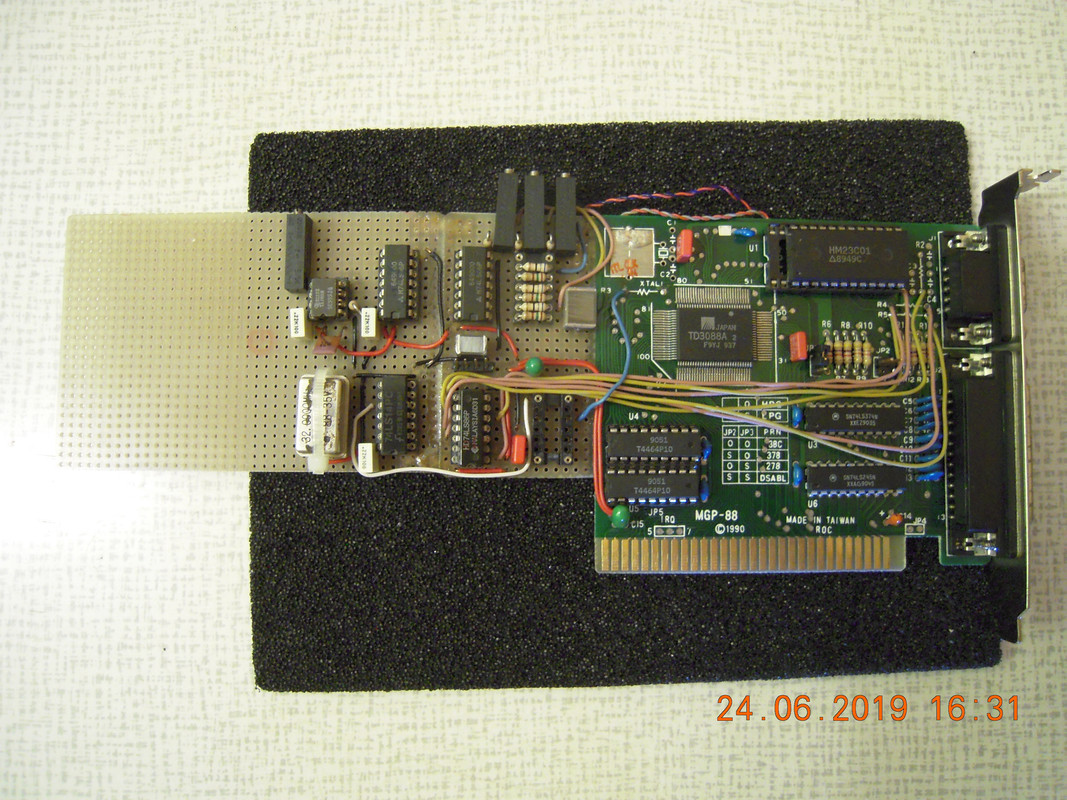 Ah yes, the strange-looking Hercules clone card, respective what is remaining of it ... 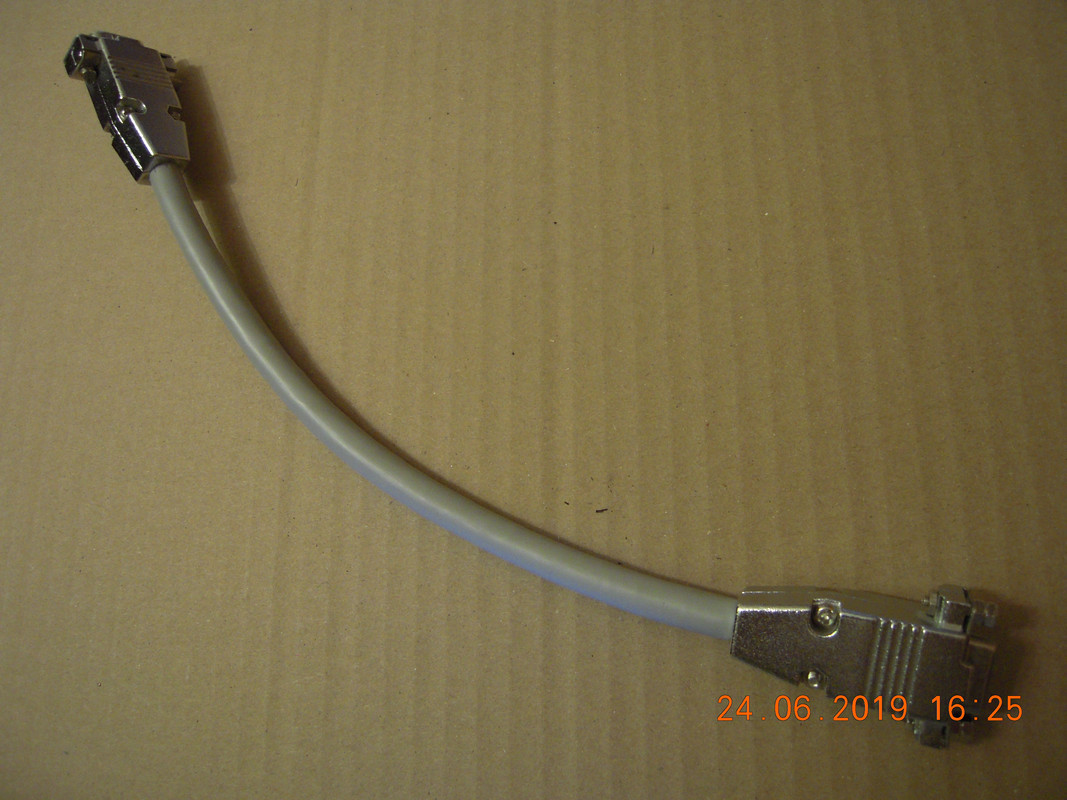 And its 9pin-VGA cable adapter

I finally got around to two mini-projects.

1. 3D printing the SD-IDE bracket a user posted on this forum. It has some issues with the rear screw holes not lining up, but I think that is more on the PCBs not being consistent than the print.

2. I originally purchased some plastic bonder to repair my car's bumper cover. Turns out it works REALLY well fixing cases too. I used a dremel to sand a wide V-groove in the plastic and cleaned it before applying the bonder. I still need to purchase plastic filler and paint to hide the crack (if possible). I could always leave it with a Kintsugi vibe.

found a good use for my fine pencil today...

one of the pins was curled over 180°, had to get it out with a knife before I could slide the pencil over to try and wiggle it straight again

all in all a lot easier than using tweezers

I guess once you go Amiga, there's no going back 😀

bent pins are the work of satan

I had the pleasure of (not) cleaning up battery mess on a 286 motherboard:

It turned out relatively OK once everything was wiped/scraped off:

On the other hand now I have some exposed copper traces that I should probably coat/cover somehow? Would hot glue work in a pinch?

Use a UV-curable epoxy. You can find this on aliexpress for about a dollar 😎

Been busy as heck lately...have not had time to post.

Got the NEC Ready 9522 up and going full now with Win98SE on an 80GB 2.5" laptop drive with Maxblast for the DDO. The RTC has been modded/fixed so now it keeps settings and boots (it would drop HDD configuration on reboot rendering it unbootable till I fixed that).

Went to Fry's while hanging with family, bought the parts I needed to continue working on the light pen for the Tandy 1000. 3 Phototransistors to try out and a data to ide converter for some sick SATA tricks put with some drives I have laying around.

Lastly, I've been following the Computer Reset thing and flip.flopping back and fourth about it looking at plane prices and cost to drive and other travel logistics. That place is like a Mecca now but I'm holding off because I'd mostly just want CRTs and a DeskPro 386 most likely.

Picked this up at the flea market for a dollar and its hiding a cyrix cpu in a socket 7, a pleasant surprise. Just finished reassembling and it cleaned up nice!

Nice find. Which flea market did you goto?

Is that a Biostar M5ALA board? That is really cool. And for $1? That's a bargain.

My thoughts exactly. When I replaced the VIA 700A Socket 370 CPU with the Celeron 1.4GHz I had on another board, I placed the CPU in the foam pad that came with the SRAM chips I bought on eBay and placed another one on top, and placed it in a used anti-static bag (not ripped) in case somebody wants it someday.

In fact, I shipped my old AMD 486 CPUs a few years back and did the same thing: placed the pins in the foam pads and in anti-static bags.

I also had some bent pins on the POD-100 Intel i486 processor that I fixed easily and they are still straight to this day.

If nothing else, you can rescue it from oblivion for bragging rights. I did that with a Pentium 4, and my scummy boss at the repair shop charged the customer for a whole new processor.

That poor Pentium 1 75MHz processor. Heck, my 100MHz Pentium 1 pins get slightly bent because I forget that the CPU is on my desk at the moment until I got the heatsink fan to work properly since it was stiff.

I've been steady working on a DOS build and I've been trying to get a 16 bit ISA sound card to work under Windows 98 DOS-Mode... which sounds simple enough but I've been running into some oddities. Probably caused by the sheer amount of cards and drivers I have circulated through the system. At this point I'm really not sure.

I started off with a Yamaha Audician32 card, that I was pretty happy with until it seemed that NFS SE didn't particularly care for the card. So I swapped that card out with an AWE64 Gold. Which was awesome, but I couldn't get any sound out of it in Lemmings. I like Lemmings. So I dropped down to a Sound Blaster 16 (CT2230)... I can't get low DMA working in any game on this card. Did a fresh install of drivers, I run Diagnose, everything passes and works fine, the software sets the lines in my autoexec and I have FM synth and all that goodness, just no sound effects.

The weird bit in regards to that CT2230 is that the drivers insists on setting the low DMA to 1. Which would be fine if it worked. I can try to force the resource settings in BIOS which seems to work for other cards, but the Sound Blaster drivers will only set DMA 1. It's just odd. I also have a CT1770 that actually has jumpers on the card itself to set resources. I tried swapping this in with DMA set to 0 and running Diagnose on that card still set DMA 1. Which again netted me no sound FX in games. So I gave up pulled the card and set the jumpers so the card would use DMA 1. Which is what the Sound Blaster drivers seemed to be so adamant I use. Guess what? Now I have sound FX. Isn't the point of Diagnose to sniff out what the settings are on the card, or what resources have been assigned to it and set the environment accordingly? It seems like this is backwards.

Anyway I was happy with this for a few moments until I found that the Adlib setting on Street Rod 2 absolutely would not make any noise that didn't sound like my PC was imploding on itself.

I don't know that I typed all of this looking for any help as much as I did just to walk myself back through it, but if anyone has some insight I'd appreciate it. I'm just getting back into DOS and I was pretty young last time I used it. I'm more familiar with Windows.
The rest of the settings for the card is address 220 IRQ 7 DMA 1, 5
Yamaha card takes address 220 IRQ 7 DMA 3 (no high DMA it seems)

I may just end up sticking with the Audician32 as it seems to be the card that breaks the least.

In fairness I am complicating things by running a second PCI card for Windows 98 but... I really don't think there is any conflict there. I even pulled the PCI card while I was troubleshooting. I didn't observe any change.

tl;dr
Sound cards are hard for me I guess.

Cleaned and fixed my Lite-On LH-18A1P DVD burner as it refused to open without a disc in the drive. After cleaning, lubricating, and demagnetizing the tray, belt, and spindle, it opens and closes without any issues. Going to fix my other DVD drives soon for my Windows 98SE builds as they either don't read anything or can only read CDs and not DVDs very well.