Awesome! nice find, my first computer was VIC-20, still got it and it still works! Some of the Mastertronic unexpanded games are pretty good, phantom attack is one I like, it's very noisy fast shooter. When you get your RAM PAC be sure to try Jet Pac by ultimate, great fun 😀

Do you have any insight on the NX Pro 16 SCSI interface. I read somewhere that it possibly needs an expansion board to work? I haven't ever seen one anywhere if this is the case. I was wanting to setup mine with a SCSI CD-ROM.

Print ad for the card which shows SCSI is an "upgrade option": Also the wavetable upgrade option. This is interesting because Aztech had a "Sound Galaxy Wave Power" card with an Ensoniq Otto chipset back in 1993, I believe. Then they came out with a smaller daughterboard in 1994 with a Crystal/Dream chipset.

And so it begins....
I am still missing to buy parts, however I have enough to start this build. When finished, I will have a newly build Commodore64 1986-Model-C in nearly exclusive black. Systemboard in black, case in black plastic and keyboard in grey'ish black. Mmmmm.... Black and gold.

So far, I have only soldered the sockets. Missing a few of them. Tomorrow I will solder the resistors, then the cartridge connector.

I tried once again to get my AST Premium Exec 386SX/20 to boot off its factory Conner 40MB hard drive but even with the correct CHS settings in setup I still get "ERROR INITIALIZING HARD DISK CONTROLLER" so I can only assume the drive is just...bad. It's not a CMOS battery thing, I already removed the CMOS battery, unless it needs a working one to save the drive settings properly.

Tried it, OpenGL works, the samples work at various speeds, the larger the window the slower they run, not suprisingly.

Tried HalfLife Uplink, software mode is still faster than any of the possible OpenGL settings in the Scitech setup.
Decided to be fearless and tried the Jedi Knight 2 Outcast demo, averaged 0.1fps using the lowest ingame settings...

Today I've been messing with my first AM2 system in about 10 years - my first "own" (as in non family) PC.

I was going to make an Oddball PC - Athlon II x3, 5GB of RAM, an ATI 4830, using an motherboard with an usual layout, stuffed in a tiny Tiny PC case, but I've been having loads of issues with software installing, and it runs very hot! Windows 7 is rapidly becoming a pain to use (more so than XP and 10) with software (e.g. display drivers) needing VCredist which needs Service Pack 1 which needs the Windows Update to be functioning which needs various updated to be applied manually otherwise WU will just say searching forever which needs downloading through a browser which barely functions because the build in certificates in Windows 7 are not up to date / sufficient in some way so I get privacy errors everywhere (which is fixed through an Windows Update update).

Eugh. I think I'll just dump XP on it and not use Steam, which is a shame as I think the CPU will have more grunt than my XP / DVD game collection will know what to do with. 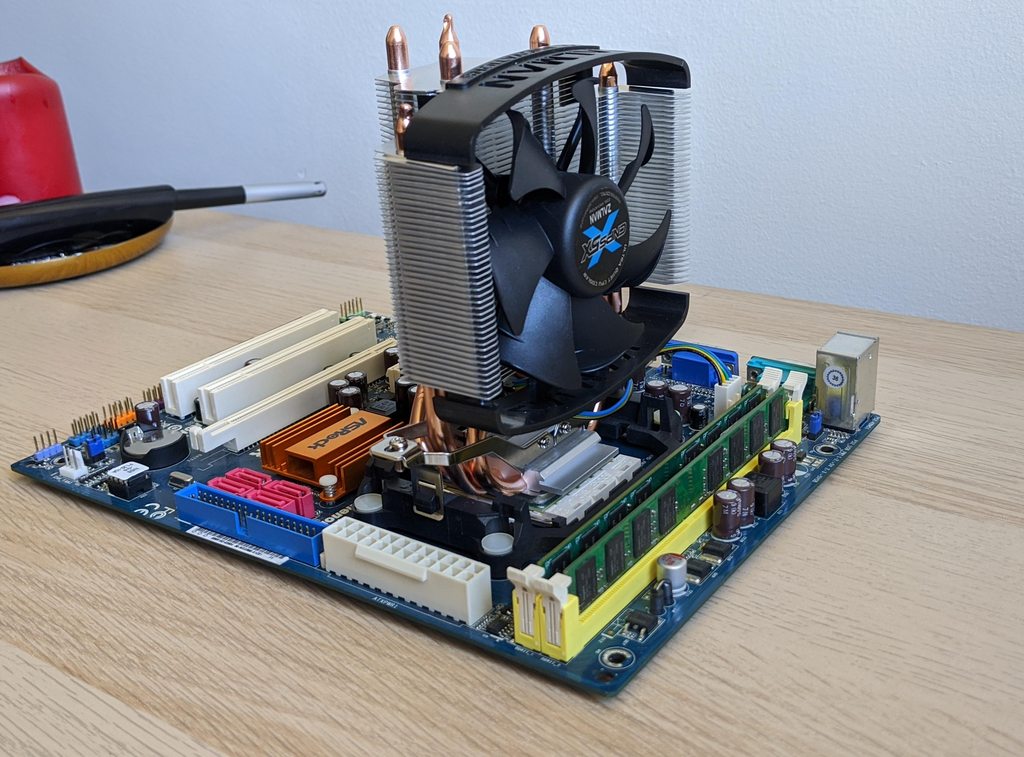 (downgraded to 4GB RAM incase the 5Gb was causing the issues)

Paint Shop Pro 7 for the drawing of the icons, Axialis Icon Workshop for making the icon files and/or libraries. The refresh I did was adding 8 bit versions of the original 4 bit icons to their files. Icon Workshop makes it so much easier to manage icon formats within a file, and even edit the icons if something was missed in the transfer.

Screenshot I unintentionally took while working on a bunch last night, as AMD's software takes over a lot of the keyboard shortcuts that Paintshop uses. I have to get around to changing them. 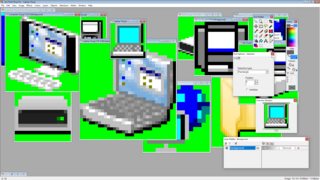 Reinstalled my T5710 and this time with the generic Microsoft driver instead of the VIA driver to see how compatible it would be.
End result? Its compatible, but will bluescreen every now and then. So not recommended and its obvious why my favorite USB stack which is the one hidden in SP3.CAB from the unofficial service pack (U98SEUSB.EXE) offers a seperate option for VIA users based on the official VIA drivers combined with the usual improvements like Xbox 360 Controller and USB Stick support.

I plan to eventually have a working install package that installs all the software and updates i'd install on Windows 98 automatically and wanted to know if i could automate USB driver installation. But with the instability this is a nogo. Ill either have to offer it separately or keep that part manual just like the SP3 did.

There exist ways to run Steam on Windows XP by using an older client and blocking it from auto updating.
Internet Archive has a copy of a Steam compatible XP if you need one, although you do need to clean it up a little before use given the author failed to wipe the config and account data, if you can't find it i can also send you mine which is already cleaned up.

For Windows 7 i personally like to use a newer DVD with Service Pack 1 already in it, but another tool that might help you is the WSUS Offline project which can make an update CD with all the updates in it. They did drop support for Windows 7 so i am not sure if it can still be used if you use an older version, but i do have an ISO from 2018 laying around. Updating Windows 7 takes ages, but it can totally be done offline just fine.

And another tool to lookout for is Cert_Updater.exe which works on XP and higher. This will update your system certificates for you, no need to have Windows update do it.

You don't have to use 20 year old software to do it. GIMP is free, fully featured image editing software, and I have no doubt that there are a billion and a half free icon editors out there, since even I made one back in like 1995 in VisualBasic 3, as it was one of the tutorial projects. I just use Paint Shop because PSP 3 had such a powerful impression on me when I first used it, and 7 was the last version that had the UI I had grown accustomed to. I have PSP X, from when Corel was giving it away, but you can't hide/show the menus with the TAB key in it, and that is a dealbreaker for me. They make you go through a series of dropdown menus to hide or show each individual menu. So, I use 20 year old software.

You don't have to use 20 year old software to do it.

It's not a real web ring, and "Coolguy90" is a former coworker of mine. It's set up randomly, but if you like, I can add you to it, and make a "fake" ring index. You could possibly get tens of extra hits per year! Wowsers! It's not easy finding sites that fit the theme of "oldternet", since they can't just be sites from the era, but have to be recent sites emulating the older ones, or at least celebrating them. Most people can't even be bothered to make images, never mind a website.
I'm still trying to come up with new era-appropriate content without just re-uploading other people's stuff (and giving credit, natch). Alas, forcing creativity is like trying to pour water uphill.

As it is, the site is kinda' chaotic, having icons, wallpapers, NES ROM hacks, DooM maps, and software downloads on it. If I spread it too widely, I'll have to rebuild the menu into a nested nightmare of subdirectories.

My MCS-48/41 adapter for my Willem programmers just arrived and I managed to dump the data of an old American Megatrends keyboard controller IC. That and its corresponding BIOS HI/LO data dump are still on my EPROM burning desktop PC. I also have a Holtek HT6542B IC from a semi-dead PC Chips M520 board, and reading it, unsurprisingly, showed all 00's.

Computer in my collection that had too much work done is... Compaq Armada 1573DM!

I just got my 586 build in its new house. Not sure if its gonna stay though, my desire for games like Descent/BUILD Engine and Screamer have me thinking maybe i should just head back to Pentium town. There's just this awesome feeling of having a rig in the 94-96 era though. I don't need over 30fps frame rates but this 5x86 isn't cutting it as is. Maybe a proper P90 would suffice me?

I swear i see videos out there with DX4-100's running faster then this thing (https://youtu.be/1B1jPkPjqgE?t=6073)
Im only seeing around 34FPS in Doom, and that's with the ram optimized as much as low as i could get it in the bios. Im no AMI Winbios expert though, my previous boards have been AWARD so maybe im missing something?

Because otherwise either Tseng ET6000 that guy is running is really make that much of a FPS difference, or that Intel chipset is smacking the SIS's rear on the LS486.

Today - With the aid of my multimeter, I spliced together a proper AV cable for my Commodore VIC-20: 5-pin DIN to Phono. Saved me having to buy a ready-built one, this works just fine.

Also been re-organising the contents of the SD card for my SD2IEC to seperate games by RAM size requirements and learning all about the VIC-20's weird RAM mapping in the process. I'm actually having a lot more fun with this VIC-20 than I thought I would, so that's a bonus. Still stuck playing unexpanded games at the moment though, should receive a 35K RAM expansion cartridge this week and try out some Doom. 🤣

Additionally today, I was using my Sinclair ZX81 briefly to make some slight adjustments to some BASIC code I'd written. I was having the usual issues saving and then having to adjust the amplification etc, so I cheated and edited my program on the emulator instead. Only 2 lines needed adding and it saved me some time haha. Tested it out afterwards on the real ZX81.

Was messing with an HP Vectra VLI8, unfortunately, both of it's IDE controllers died.