I've been on a newly re-kindled Vintage computing bender.
It started with a mate who wanted me to help fix an old compaq luggable (I had one as a kid.. loved it).
Anyway, got that fixed thanks to good ol Gotek 😀

Then I did what any nostalgia loving nerd would do - I ebayed basically everything I had as a kid to try to replicate some sort of weird alternate universe where I didn't regretfully throw out all this cool stuff..

One of my many purchases has been this delightful Sharp PC-7100 (still in transit). It POST but doesn't boot.. so likely a FDD fail (the HDD /Hardcard is removed)
Anyway it got me thinking - well what would I want to do with this if I got it?
Well write apps for it of course..

So I started an 86 box, set it up to the same config as the sharp, grabbed open watcom and compiled a hello world app in windows 3.0 for real mode.
In short - it wasn't easy, but I got it up and running and have started constructing the little project I'm forming for it..
I am also doing a TGUI version for DOS but for some odd reason I just really wanted to torture myself with 3.0 real mode for a bit..

I tried to unsuccessfully restore an IBM Netvista Pentium 4 for a friend.

After manging to juryrig mounting an HDD and adding the missing floppy drive, replacing the DVD-ROM, cleaning it thoroughly, adding new feet to it, replacing the dead memory and the coin cell battery it actually booted.

I got as far as partitioning the HDD when it locked up hard, and refused to turn on again.

Now it just gives me a 3-1-4-3 beep code at POST, signalling a dead component on the motherboard.

Click F to pay respects. Will be shipped back to my friend as I don't have time to troubleshoot a Pentium 4 motherboard and its likely dead shitty capacitors..

A Sound Blaster 2.0 ended up on my doorstep today.
Got it mostly on an impulse as it was cheap and..well it's a 91' era soundcard 😀

Don't fully know for sure if it's working, as all it wants to do is output static and really abnoxious glitchy sounds.

Not surprised though. Unfortunately I dont have any AT PSUs lying around and my ATX adapter doesn't makeup for the -5V rail this card apperently needs.

Soo...I'm just gonna assume it works should I find something to power it.

I have a full original Net Vista 8307 - L5U (P4- 2.4Ghz on a 845G mobo with board #FPU-491599 r1.3), have not booted it up in a year (is in storage) but checked my notes and it has a POV module and will not boot proper without error if the cmos battery is weak or dead. Not sure if that helps or not since you already replaced the battery. It has a decent little P4 board but is limited in what P4 cpu it can run. Added: that POV module cause me a lot of headaches as it talks to the bios in some strange way and board would not boot without for some reason (just re-read my notes on it)

Swapped the I/O card in my 386DX/486DLC system to the Promise EIDE Pro Super I/O card and it's almost successful, except the OS won't boot due to the BIOS and controller card changeover. Going to copy all of the files from the HDD to my laptop, format the HDD, and copy everything back over. Learnt the hard way with the EIDE Pro card requires the HDD parameters to be set to Type 1 to get the LBA to work right, but I got everything all set, except for the HDD not working with it because of the card and BIOS changeover. Getting closer here.

Tried to compile Dune Dynasty for WASM, so I can play Dune II in Chrome/Firefox with all the QoL improvements of OpenDUNE / Dune Dynasty.

Sadly, Allegro 5 doesn't seem to have an emscripten port...

A friend gave me yesterday a dual external cd/dvd scsi case. The power switch was missing so i had to short it in order to make a quick test, but aside from that it seems that everything is working ok.

I dont have a scsi card to test this monstruosity on a machine right now, maybe this is a good opportunity to get one.

I've played through Quake 4 many times it's one of my favorite games. I remember waiting in line at midnight when it was released at my local EB games.

I'm going to clone the 82GB IDE drive to the SATA drive (using a SATA-IDE adapter) and attempt to place the drive into another K6-2 build, with a different chipset.

The hope is that so long as I do some prep work first, ie. removing the chipset, AGP, sound & graphics drivers etc, Win 98 should happily detect the change of hardware and I should end up with 2 similar-spec systems all ready for some LAN gaming!

That is of course all assuming that the other system supports the 82GB drive, I haven't looked at that yet.

I made a volume control doohickie for the PC speaker in my Presario 460 - its just 1kOhm linear potentiometer mounted to the CF card adapter bracket.
I mean, Dune 2 sounds nice with SB and all, but nothing beats the nostalgic ear-bleeding screech of in-game credit count coming from the PC speaker. Now a little bit less ear-bleeding.

I managed to lubricate and internally clean my Microsoft Sidewinder 3D Pro. Disassembling it also seems to have brought the spring back in to the spring, since it seems to gladly center its self instead of moving back to center, if that makes sense.

If you were quick on the look, you might have seen a thread I made for two minutes or so. As it turns out, a single plastic piece was missing for a few minutes and, well, that was the entire problem.

I managed to lubricate and internally clean my Microsoft Sidewinder 3D Pro. Disassembling it also seems to have brought the spring back in to the spring, since it seems to gladly center its self instead of moving back to center, if that makes sense.
image0.jpg
If you were quick on the look, you might have seen a thread I made for two minutes or so. As it turns out, a single plastic piece was missing for a few minutes and, well, that was the entire problem.

Did the left hand slider need lubing? I have TWO of these sticks and that slider is sticking on both.

I managed to lubricate and internally clean my Microsoft Sidewinder 3D Pro. Disassembling it also seems to have brought the spring back in to the spring, since it seems to gladly center its self instead of moving back to center, if that makes sense.
image0.jpg
If you were quick on the look, you might have seen a thread I made for two minutes or so. As it turns out, a single plastic piece was missing for a few minutes and, well, that was the entire problem.

Did the left hand slider need lubing? I have TWO of these sticks and that slider is sticking on both.

I lubed it, and it's working well, albeit with it needing effort to actually hit the absolute end of the rail. it's smooth up until that though.

Just went trough my video cards and found this beast. Elsa Gloria XL. It's from 1997 according to vgamuseum.info. Not sure what to do with it if anything since it's mainly for CAD

I went to my recently deceased Grandad's house to help my Dad sort through his stuff. Sadly he stopped being into tech in the 60 so there were no PCs but he did have this Word Processor (Sharp Font Writer FW-760) thing. 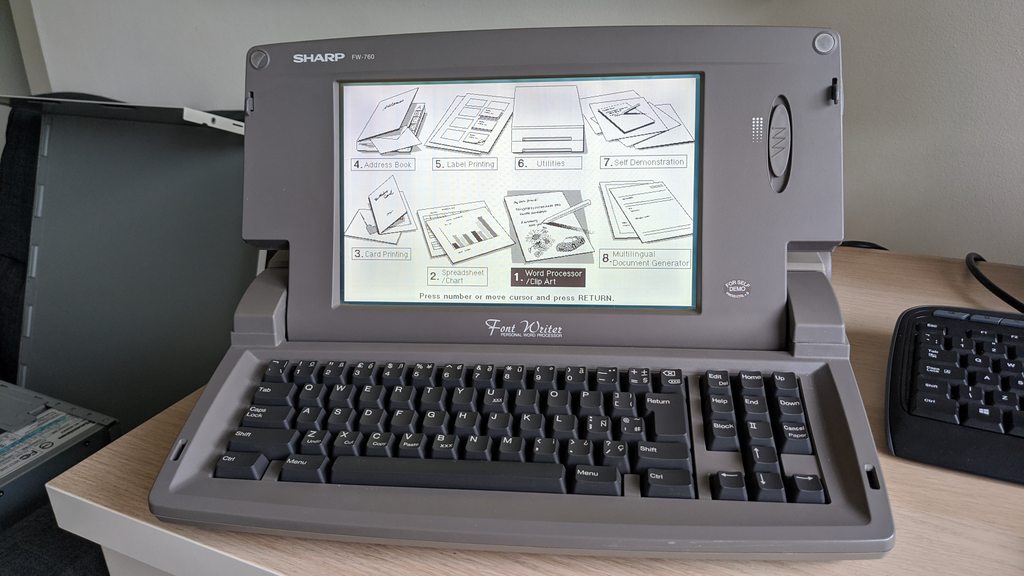 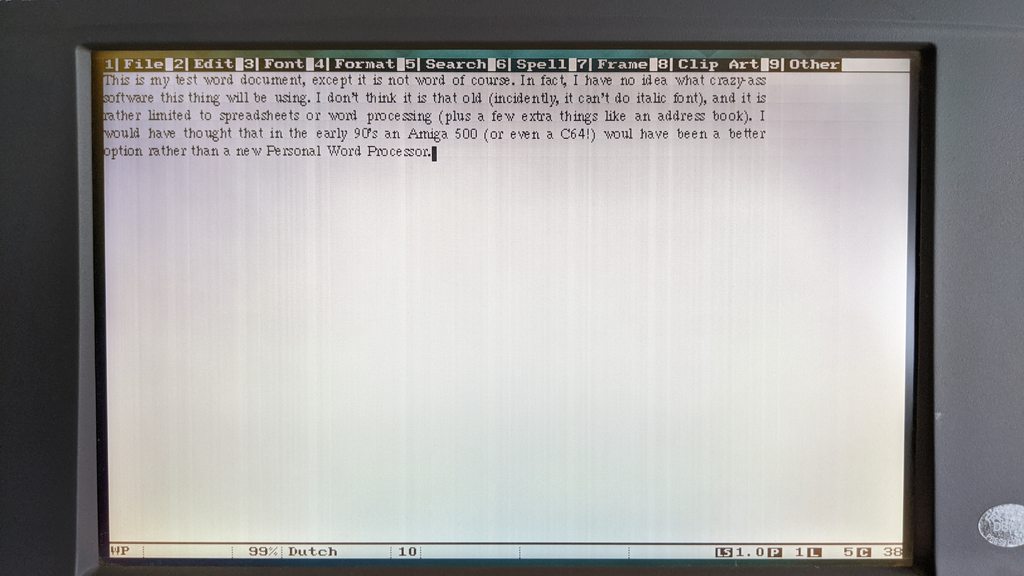 It's pretty terrible, I can type faster than it can display text and the keyboard and controls are very different from period MS Office and Windows 95 standard keys. I can't see why anyone in 1996 would buy a new one of these over, say, an Amiga 500 or 386PC. It saves to floppy disk in wordperfect format.

He also had a cookbook from 1913 and his Aeronautical modelling membership card, which sadly expired in 1958. I would put this non PC stuff in spoilers if I knew how... 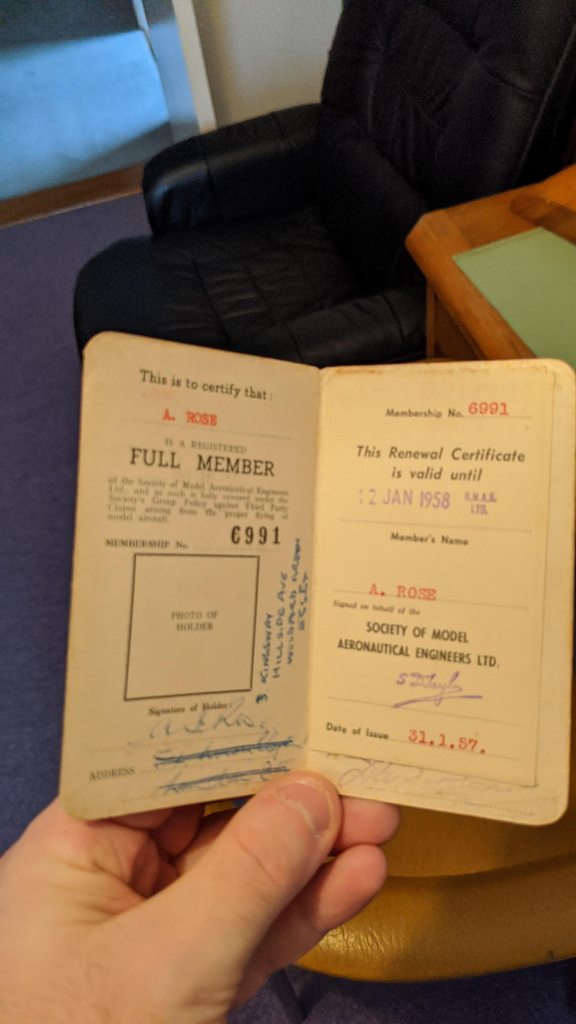 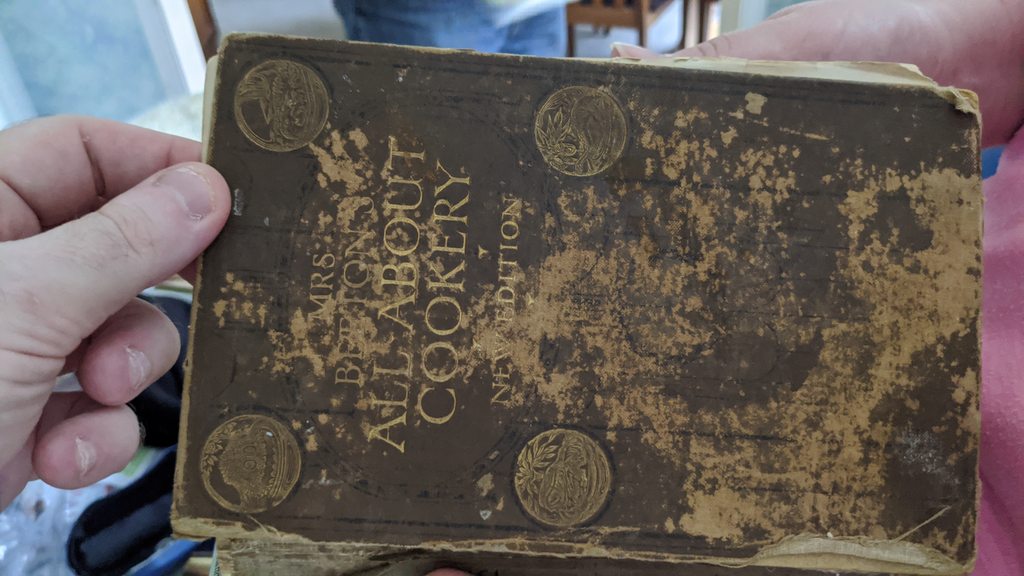 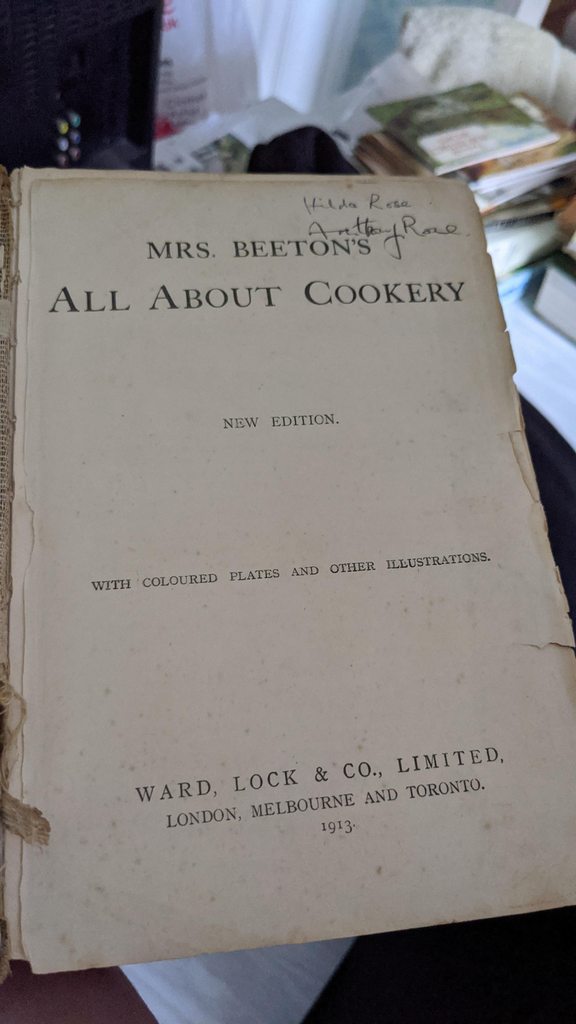 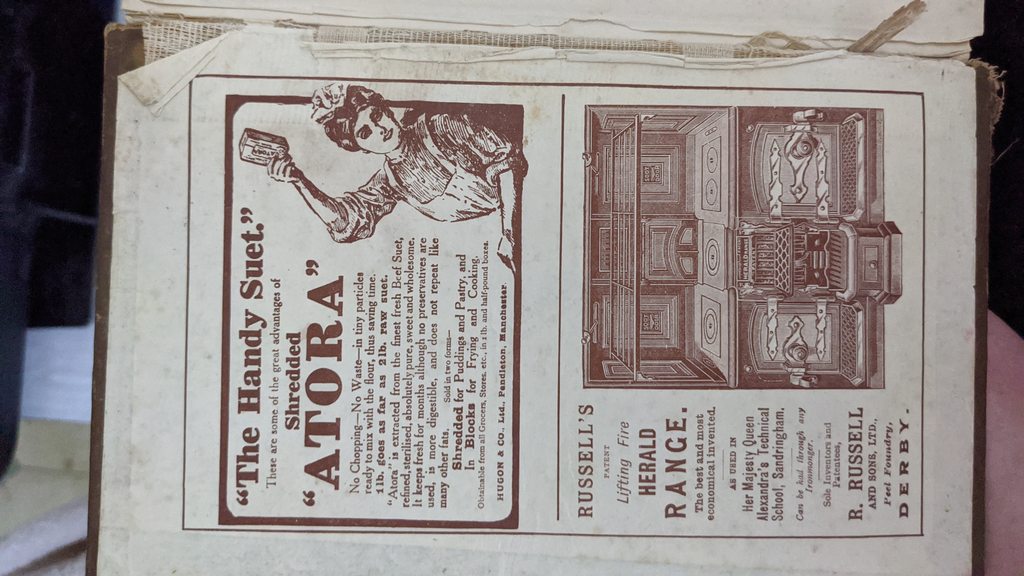 Took an AMD K6-2 500MHz CPU out of 1 Socket 7 PC (where it was underclocked due to lack of support) and moved it into another PC which had an AMD K6-2 400MHz CPU. In the process I cleaned the heatsink & fan, which was pretty disgusting, as well as removed the weird thermal tape/paste that was applied to the K6-2 400. Removing that stuff from the heatsink & CPU took a fair bit of scrubbing with Isopropyl Alcohol.

Also removed a 6GB HDD from the new 500MHz PC and replaced it with an 82GB HDD cloned from another Socket 7 PC. Had to update to the latest BIOS dated 2000 to support the larger HDD, which is good because the BIOS I had was a cut-down limited Compaq-branded BIOS (the PC is a Compaq Presario 5420) and now I have a more fully featured vanilla BIOS. Also had to enable a few features in the new BIOS to allow it to function with my PCI Voodoo 3 2000, rather than just the onboard SIS 530.

All was going well until I tried to install the SIS IDE driver and it all went to hell. If I can't fix this, I'll have to re-clone the original HDD again. Always hated SIS 🤣.

The old K6-2 400 went into older Socket 7 PC that had the previous underclocked CPU. I haven't gotten around to configuring the jumpers on that properly yet, the CPU was detected incorrectly at 448MHz and caused odd behaviour with the AT keyboard not working after a min or so - this behaviour I've encountered in the past, hence the need for underclocking the CPU on that finnicky old board. I'll sort that out tomorrow.

Today is going to be all about cleaning and working on my comuting/guitar/electronics/indoor wood-working workspace - basically my "lab" of sorts. Then at some point FedEx "Santa" is going to bring over a new docking station for the 486 Versa laptops which I plan to outfit with some sound and networking hardware so that when they are docked at home I don't need to use WiFi all the time (just when I'm not in the workshop) - Plus I'm thinking of doing some sick experiments with printer drivers so I Can print from the modern Cannon Laser Printer (have some schematics in Circuitmaker 2000 to print out).

The cleaning job is because our inlaws are buying us new furniture (crazy lady has been evicted). So I moved the TV into the livingroom so we have a proper "livingroom" again and then my "lab" will be getting something Retro/Vintage and CRT as soon as I can find it. I have a line on 2 TVs north of here and a PVM at the game shop (if they still have it). Might need to go to the game shop anyway to buy a Zapper - I miss Duck Hunt.

Cleaned a Micron labeled MS Intellimouse v1.1A PS/2 mouse picked up a while ago, was having button issues and was very dirty. Now works well and looks barely used.