So yeah I could probably push my E4600 to 3GHz+ and blreak 35K easily, but I don't feel like overclocking this PC will achieve much. I just want it to run Win98 and DOS games, and a modern Linux distro for convenience.

Absolutely no reason to overclock, those scores are more than you will ever need to max out anything you'd want to run on this system. I was just curious about the score.

I have a little testing bench by my main computer desk that gets used to test laptops and things. Mounted on the shelf above it is an 8" 4:3 LCD that I 3d printed the casing for, which is great for testing my many computers / motherboards.

A while back (during lockdown 1 I think), I decided to make up an ATX + 3 ISA slot riser PCB and that ended up sitting on shelf by the testing bench, with an Advantech PCA-6134 card fitted. That's kind of become my favourite 'quick testing' PC since it's tiny, fits on the shelf and can fit any ISA soundcard or video card I want to check out.

But it was scratching up the shelf, the pins and even the standoffs were chewing up the wood. And it didn't have a turbo button, or a real power button, all the wires and cards were just dangling around.

So I decided to fix that 😁 Now the sharp bits on the front and back of the riser are covered and at last the cards can be screwed into place so that they don't short on each other.
The whole 3d printed case idea is something I've been slowly working on since I got my 3d printer nearly 2 years ago, but this is the largest one so far.

It was designed up in fusion 360 using the PCB designs I made up in eagle, the toughest part by far was getting the reference parts in, since ISA ports and 3d models of ISA cards aren't something that pop up when I search for them. Now there's a real turbo button, ATX on/off switch and a reset button, from some switches I had laying around.
This is printed in PETG so it doesn't melt in use and the screws that hold in the cards are screwed into square nuts embedded in the plastic so they can't strip out. The wooden dowel rods I had laying around make it pretty sturdy for a pile of plastic too.

I've got 5 PCBs, so now I'm tempted to make some more of them. But from here, what I really want to do is expand this to fit a baby-AT motherboard like the little 386 DX motherboards or the 4DPS. Everything does line up on this one, so I'm fairly confident I've got the right dimensions to do it - though I am planning to use some hardboard or maybe plexiglass to cover the expansive areas, it's got to be printable on my Prusa i3 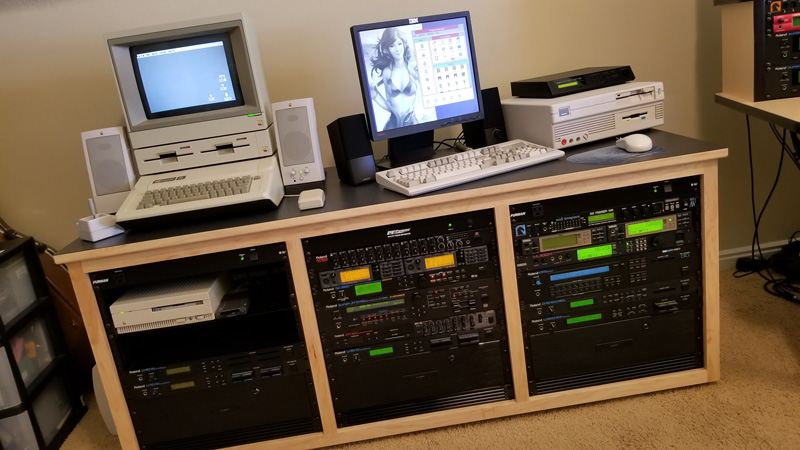 That's such a nice setup 😀

That's just freakish, I don't even know what to say.

Vogons award for the madlad with the BIGGEST organized-midi-mountain goes to....you!

No but seriously though, very nicely organized little display in that little case. Awsome retro corner 😀

That's not a mountain, that's a continent !

Congrats for the beautiful setup.

My birthday yesterday became all about the Tandy 1000A. Started playing some of those DOS games from my downloader/hoarder years and deleting the ones that don't work or are no fun. Thinking about doing a YouTube serries around the ones that are not as much fun though. There's so much more out there than Donkey, Alley Cat, Sierra AGI games, and Ultima. Like I',m rather enjoying the Arkanoid ports with the Deluxe Mouse.

I also reinstalled the original 2nd floppy drive and went back to the "Stealth" configuration where teh HDD is hidden behind the floppy drives. Just a better way to leave the system unmolested from stock and just add other hardware on top of it. Next plans are to order an 8087 and a V20 for it, and possibly make some Gamepads for it. of my own design.

Also started experimenting with retrobriting a little - took the faceplate off my badly yellowed CD-RW drive that was in the NEC Ready 9522. Going to see if my method works - just involves water, sunlight and pure medical Hydrogen Peroxide. So far some change has occured.

And according to shipping the Versa V should be here today, so there's that to work on next. I did just order the wrong FFCs and connectors for the two screens I have laying around that need logic board swaps/repairs.....so I might need to educate myself some more on those. Bought some that were too small.

Thought that my Seasonic AT PSU deserved fresh caps: 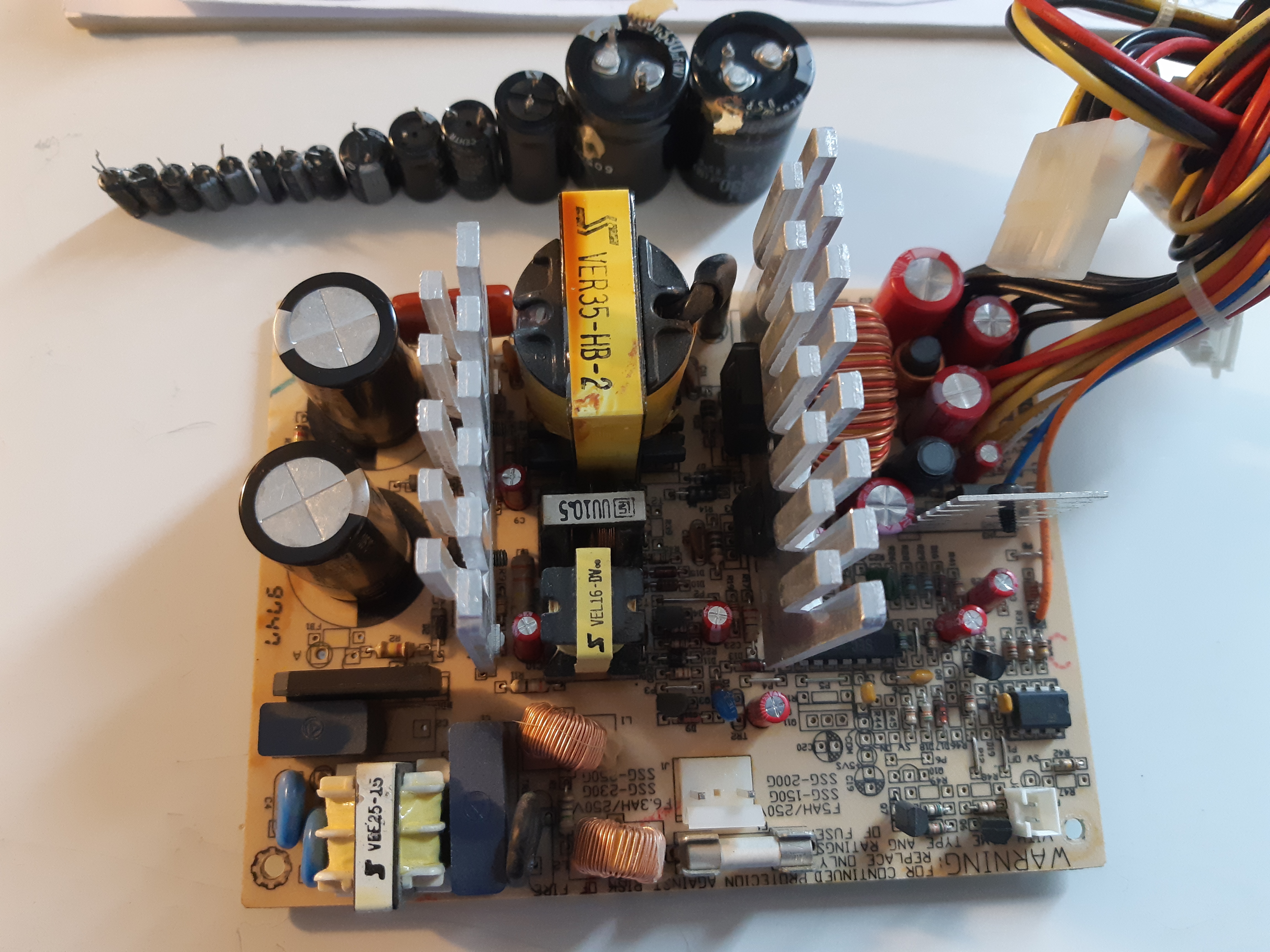 Well, got the Versa V in just a few minutes ago, and it's running like a champ already off a 540MB HDD, which I'm now installing FreeDOS on. That means if I do get any more Versas, it's going to be the earliest one (UltraLite) - that all hinges on prices/availability/whether I can put the Humpty Dumpty cracked up one back together and get the motherboard working or not. I'll go into more detail in my build's thread.

Well, my SCSI2SD finally arrived, and I spent a good chunk of the day setting up the SD card to have a nice, usable install of Mac OS 7.5.

So, naturally, this means I used the Macintosh LC II to it's fullest extent.

Well, my SCSI2SD finally arrived, and I spent a good chunk of the day setting up the SD card to have a nice, usable install of Mac OS 7.5.image0.jpg
So, naturally, this means I used the Macintosh LC II to it's fullest extent.
image1.jpg

Oh I have a mac quadra that I want to do this to one day. Do you mind going into detail about what you had to do? I am curious as to how to get a bootable os onto the SD.

I replaced an E4600 with an E6600.. only to find that my system wouldn't POST with it. Now, I'm a total absolute newbie to LGA775, I never messed around with it before. I have been an AMD guy ever since Socket 370 so I was kind of blindsided by the reason: The E6600 I got was actually a Pentium Dual Core CPU from 2010, not a Core2Duo from 2006. My motherboard's BIOS had no idea how to deal with it, so I just threw it in the trash. But I should have known to be more careful, we are talking about Intel here. Oh, before I forget. Fuck you Intel.

Ah yes... nothing like using the same model number on two different (often incompatible) devices that go in the same socket. I agree that was a really dumb move on Intel's part and probably led to a fair amount of confusion back in the day.

Socket 775 was a good platform but FSB and core compatibility from one year to the next was a pain to deal with. This is partially a side-effect of the socket being around for so long (around 7 years).

Swapped the V3 3000 PCI and the Intergraph Intense VooDoo 3D card and the card has either bad RAM or something else went horribly wrong. And the IDE cables got disconnected on the motherboard, so that needs to be fixed again and the V3 3000 PCI will go back in once I fix the fan as it makes a horrible bearing noise.

Kicked off FreeDOS on the Versa V for the 3rd time this morning - forgot to throw E-Z BIOS on the drive leading to an unreadable boot sector (540MB Drive, BIOS tops at 528MB).

Today I was getting intermittent power on my Gotek that I'm using externally on my BBC Micro.

The culprit - cracked solder joints on the Gotek's power connector due to a shitty design. The Gotek might be a great device, but they didn't think the power connector design through properly, absolutely no reinforcement on the pins with the solder taking the full strain when plugging/unplugging or even moving the power cable around. So I re-soldered the power connector, then added some hot glue to stop it flexing. Working good as new again.

Also today, sort of retro related - heard a bang from my computer room & went in to discover I'd lost all power to my 20-year-old Cambridge Soundworks 4.1 Surround PC speakers which are still in active usage. Tested the DC plug with my multimeter and absolutely nothing.

Thinking a PSU failure was to blame, I was about to start the arduous task of taking my whole setup apart to reach the power plug, when I happened to notice my pet Rats were looking quite startled and staring into the corner of the room. I looked into the direction they were staring and noticed a picture frame missing off the wall. The picture frame had fell down the back of a side unit and knocked out the power plug that powers the speakers plus several other devices. Well done ratties, they just saved me a lot of work!!! 🤣

I actually finalised my little project.
Ended up reusing section of IP TV box motherboard for I/O (power and RCA). My initial concerns about heat management were solved by little bit beefier heatsink. Current baremetal solution on Pi 4 isn't heating up too much. I hooked it up to my bench power supply and I never saw power draw beyond 1A. That's why I put 5V 2A label there.

You can clearly see that it was bolted together from random bits and pieces. I only had to buy DAC, few missing electronic components, MIDI female socket and of course Pi 4. However I ended up investing little bit by buying Dremel rotary tool. You can clearly see that I used it first time 😀 Anyways it is back side. I went for back controls because I like that TV box Scandinavian minimalist look. Now I am tempted to do something about that Motorola front logo.
I also need to find some sort of net style covers for old SCART and LAN holes. I do not want them cover completely because that Pi heatsink needs some air circulation. Actually metal case helps as well. Heat transfers trough screws to metal case. I can feel it warming up.
Also in order to maximize my investment on Pi 4 I'm still thinking to turn this device onto dual boot one adding for example internet radio functionality or something. It has LCD and decent DAC and it's permanently hooked up to my audio setup already.

And last but not least many thanks to Dopefish indeed.