Theres a part of me though that's tempted to make my own PCMCIA SB16 compatible card though since I have skills to do that sort of stuff.

Have you seen this thread? Re: Newly made PCMCIA sound card
yyzkevin has made a significant progress on this. Yet SB compatibility is the most challenging part. So maybe you could share your thoughts there?

The EXP CD-ROM multimedia kit (plus SoundNote) has an ESS AudioDrive ES688P integrated and only works when the CD drive is connected to the card and possibly requires an external speaker on the card as well.

It finally worked for me witout the CD unit connected. The driver has to be loaded as usual, without amending the cd-rom switches.

Bought a used YMF719E-S from eBay for $20 with a bit of TLC needed. Looks like the card was left somewhere cold for a long time as it's started to become afflicted by tin-pest. After several hours of carefully desoldering the entire PCB, cleaning it, re-tinning it, then re-assembly I now have a fully working very nice example of the YMF719E-S. While I was at it I also dismantled the worn/corroded jacks and reconditioned them.

Almost have my Greaseweazle setup -- just waiting for the controller board to arrive. I setup two Teac floppies which should get me a wide variety of formats to read and write. I had one blank space left in the IDE/SCSI enclosure, so I put a spare DVD-ROM in there for now to test the USB controller integrated into the unit -- it works. So I'll probably swap a DVD-RW in there later. Basically I'll have one power cable and two USB connections going to this to hook up to a modern PC. (one for the Greaseweazle and one for the optical drive) 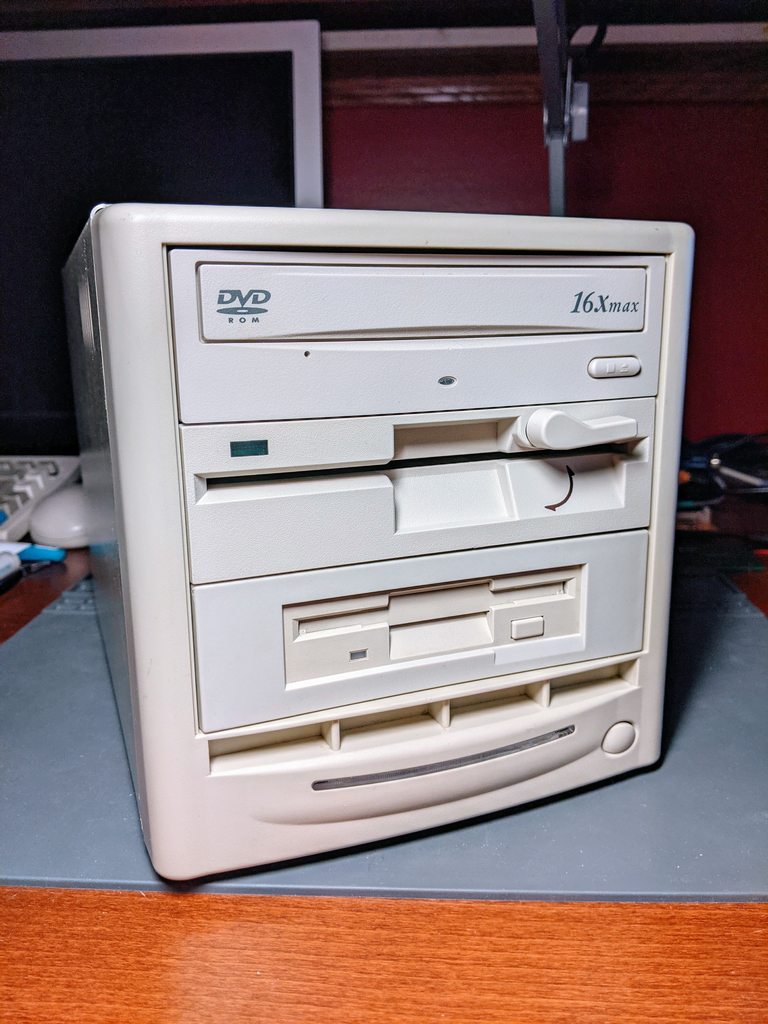 I didn't know that this format was way older than the MSI Mega PC.

It doesn't have a place for a motherboard, it is just an external enclosure. However, I suppose it could be modified to fit something smaller than ITX/Flex/Shuttle. It is also a bit taller than a MEGA/Shuttle case.

This evening I dug out that AMI Enterprise IV motherboard I've been putting off testing for so long. IT's a super clean board with retail manual and installation disk that I found on thebay in January of last year. I've been trying (and failing) to get too many corroded and ruined boards working lately, now to try something that actually looks nice.

It got buried, along with all the other components I've been hoarding for this specific build:

This is quite a fancy motherboard, it's got a little switch on the board to enable or disable the diagnostic LED, which works similarly to my POST card. Although the POST card I use didn't show anything useful with this board, it does actually post!

It works, though it doesn't seem to like the DX4 100 that much, it doesn't boot every time, but pressing the reset button a few times fixes it. It works just about every time with the DX2-66?
The DS1387 that it uses has the battery hidden away in there, so I dremeled the sides of it off to get at the battery terminals inside, cutting off the negative side, then soldered on a regular coin cell holder in its place, now to 3.2v instead of 3.0v 😀

The PS/2 mouse works and it's booting off of a 256MB CF card I had ready with DOS installed on it already. The BIOS predates LBA, so I'll probably use XT-IDE or another IDE handler to use a larger card with it.
Now to put it in the case.

That's an HE080IA lcd panel in a housing I designed up in fusion 360 to sit under a shelf 😀
It's handy since it's 4:3, has both VGA and HDMI and is powered by a USB power supply.

i like the idea of fabricating / 3d printing things to keep old (and new!) computer going, and to give new features

Instead of wasting my lunch break at work I wanted to do something useful. So I started soldering the XT-IDE rev 4A kit.

Well, that’s what you get when you forget to take your wife’s spare reading glasses or if you’re to lazy to make an appointment with your local ophthalmologist.

Yes, it is that much easier to do at home with your magnifying glasses, maybe it was just a stupid idea to begin with...

Building one of these cool things for the C64. It combines the Epyx Fastloader with the Pi1541 floppy emulator into one device. No external power needed when it is plugged in. The Raspberry Pi Zero sits on the back side. 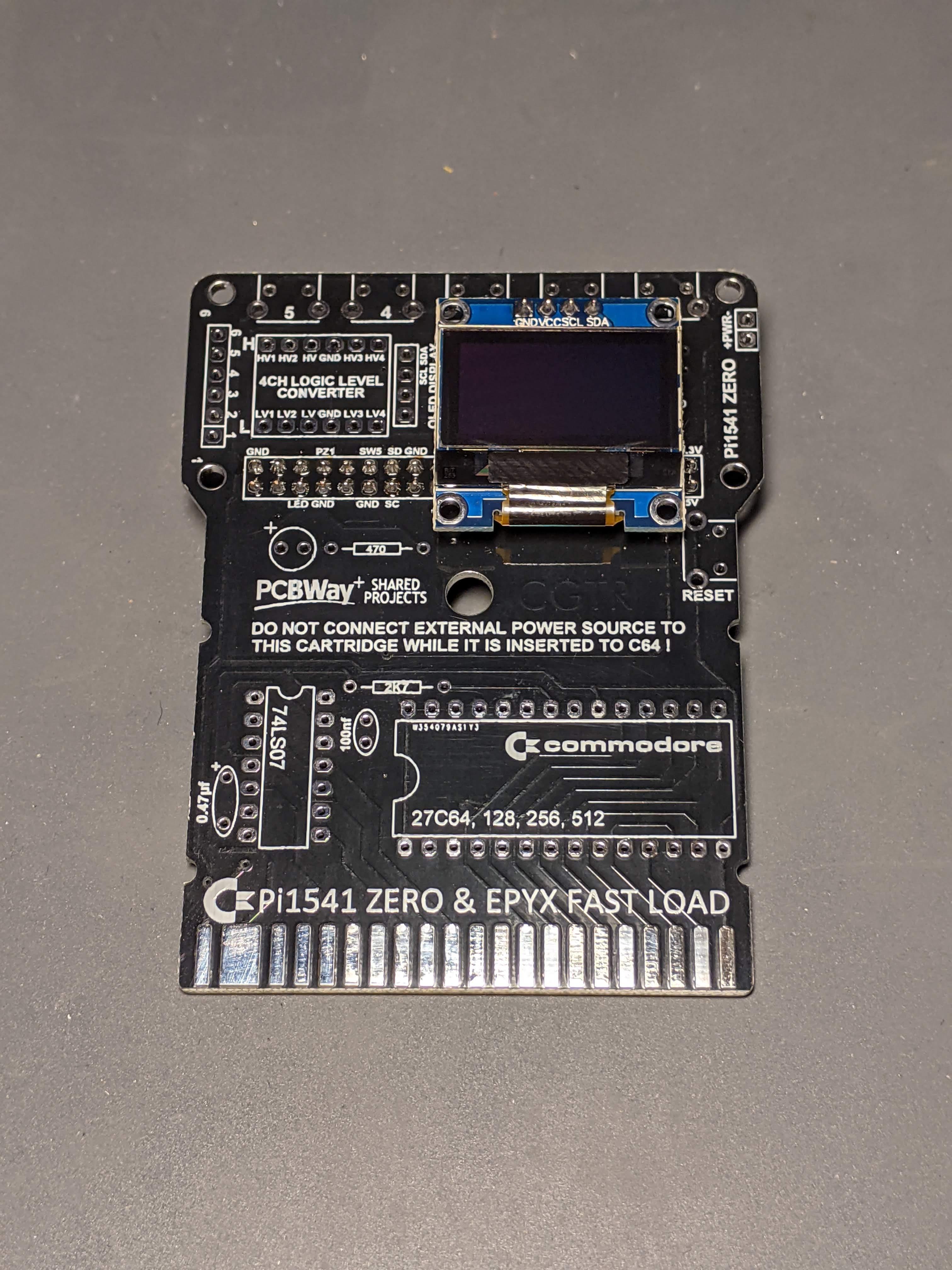 Today the sun decided to grace us with it's presence, so I decided to have a go at retrobrighting the keys from my Atari ST keyboard. I just used the regular Peroxide liquid in a clear plastic bag method.

Sun only stuck around for about 3 hours, but the results are looking promising so far - a definite reduction in yellowing. I'll await another sunny day and then put the keys back out for another few hours.

I've not attempted the function keys yet though, I'll do them separately as I don't want them going too light.

I removed all the 18 capacitors from my Antec SL350 power supply, to re-cap it. It had all crappy-branded capacitors (couple teapos, the rest fujihyys or something like that) several were already bulging. Will replace them with as many panasonic/nichicon ones as I can.

Finally got around to installing OpenStep(x86) on an older PC. I wanted to compile the original idbsp source but I didn't know which libraries to include so I have a bit of reading to do.
OS looks very nice but is not that awesome to use if one's not "use"d to its way of handling things and I'm also not familiar with "*nix" stuff. But it's way more interesting to learn something here than with Linux.
I guess id used NeXTstep 3.0 or something to produce content for Doom...?

If somebody wants to install Openstep4.2 on an IDE based system - use the custom drivers disk and choose the generic EIDE drivers (page 3 / selection 5) to eliminate the hassle of the OS not being able to mount your HD after a "successful" install.

The P9100/Weitek is supported by the OS - now I have a good reason to use this card.

i like the idea of fabricating / 3d printing things to keep old (and new!) computer going, and to give new features

Good point, I was working on the design around a year ago and once it was done I just forgot to share it. I should really upload it to Thingiverse. The screen is a 1024x768 IPS which with the controller board, cost around £30 total. And because it's new hardware powered from USB, I don't have to worry about dodgy power supplies in LCD screens zapping and shorting out motherboards (yes, that happened, an HP Elitedisplay E190i).
I'll update you when I've got that published on Thingiverse or another 3d model site.

Today though, I played Doom from a floppy disk!

The PCBs for the LS120 to IDE adapter arrived so I soldered one up and it works first try. It's hooked up to my mini test bench computer, the Advantech 6145 SBC - a 486 with a new enough BIOS to support LS120. Floppy disks are read really quickly with this thing and it makes a pretty unique sound when doing so, somewhere between hard drive, floppy drive and MFM hard drive. Dosbench was loaded on one of the LS120 disks so I had a go with doom to see if it would work.

There's a lot of variation in read speeds with these drives. These are all 2001/2002 production dates, so they're about the last LS120 drives made.
But the LKM-FC34-5 read the fastest out of the slimline LS120 drives.

EISA card came in (nothing fancy, Qvision Advanced VGA) which took some time to set up, but it does seem to work with no glitches in 320x200 as well as VGA. Going to need to find drivers for it for Windows 3.1 and do something about that backplate staggering. 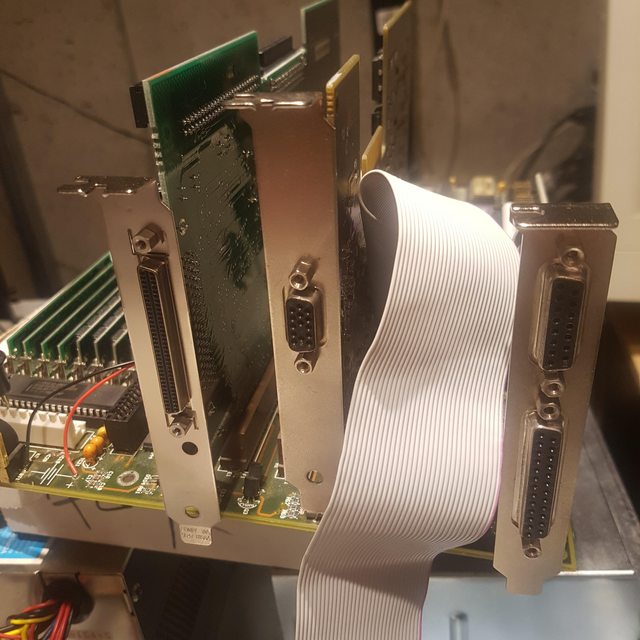 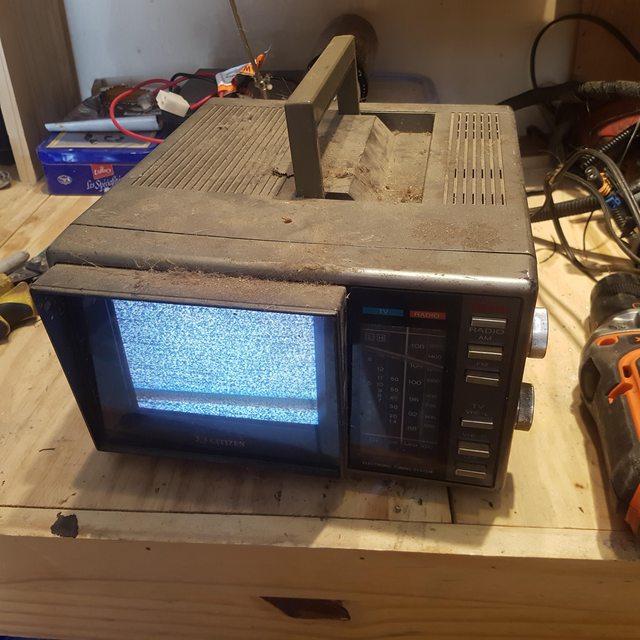 The radio works, TV does try to tune in on stuff but the signal is weak. I'll play with it later, after I clean it. Looks like it was left outside for a while. Nothing looks broken, but the antenna is badly bent.

I'll probably use it as a prop for my basement lab, or play NES on it - it has a 12v input, so does the NES, IIRC. I could build something "portable" 😁