RTV saves time and softer and is best one in limited time of repair on easy types. Epoxy is wasted on these small parts, for complex parts like transformer, coils etc sure, and is needed to have a vacuum chamber and potting epoxy that resin makers uses to degas their projects if you know of one locally. Then head out there and prepare the resin pot and put the whole thing in and degas it and pull out and let it cure then scrape the pins clean or put it on stand so pins is not wetted by resin. Best way since you cannot get to all the cavities without the vacuum pot method.

I know this as I had some loose transformers needs this but takes long time to get this right.

Also, I had to prepare the removed deflection yokes that were noisy by carefully cutting few holes inside for varnish dip. Heat the yoke coil then dip. Takes 2 days to do, three dips.

Well I did something really way out. I tried to install and run a DOS comms program on a Win10 machine in a DOSBOX window.

I just got a SD-to-IDE adapter in the mail so that I could reinstall Apple Rhapsody DR2 on my Pentium 4 overkill machine. My SATA-to-IDE adapter does not play well with others, and Rhapsody insists on installing from a CD-ROM drive on the Primary/Slave IDE channel. This SD-to-IDE adapter works just fine with the attached CD-RW drive.

With Rhapsody installed to a 16GB SD card and the Secondary IDE channel properly configured in the OS, I can now go back to using my SD-to-SATA adapter via my usual SATA-to-IDE adapter (this makes it a lot easier to use an external SATA enclosure to swap out drives/cards).

It’s a bit of a pain to get Rhapsody on a SD card this way, but it worked. I can reuse the SD-to-IDE adapter for other projects as well.

After retrobriting the 486 eBay PC, washing the board (some corrosion) and re-badging it (it was labelled a 386,now just AT 1800), I cut a hole in the case plastics and fitted a three 7 segment display. The tint piece is out of an 80s Corolla I got earlier this week when I went to a nearby wreckers. I grabbed a few more for upcoming conversions.

Think it came out rather nicely: 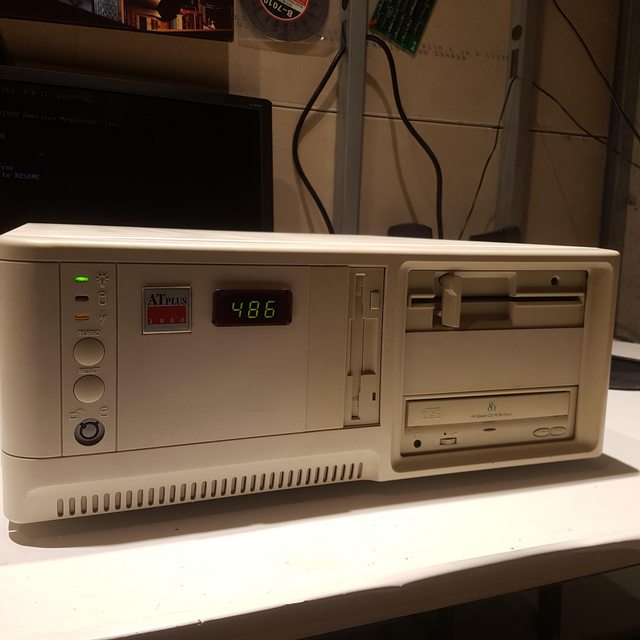 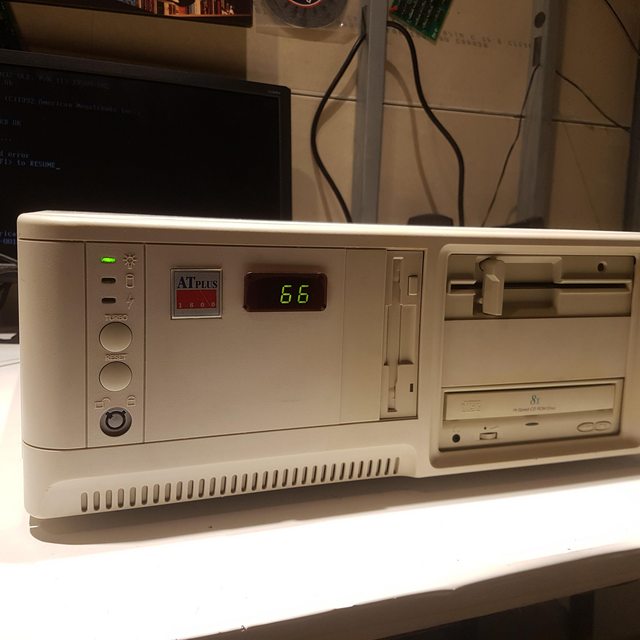 I also tested out a Chinon 5.25 a client sent in - I will have to do a write test later on. 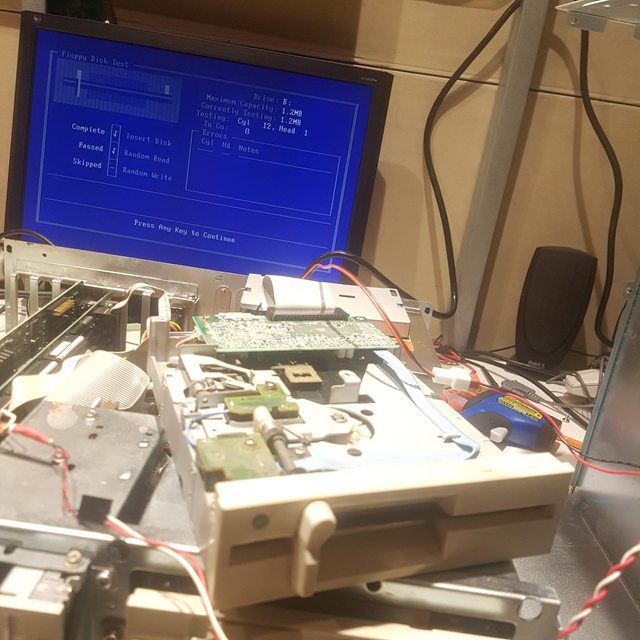 This computer is ready for the Grand 486 test of CPUs (something like 15 CPUs will be benchmarked). Now I just need to find the time between finals to record and edit it all 😉

Did some experimenting with a Paradise Basic EGA card on a Compaq Portable 1 system using the internal monitor.

It's not perfect in every way, especially the picture doesn't look well on the internal monitor since it's an analog display (also TTL supported), but the picture quality using the MCE2VGA and VGA2USB via OBS is crisp.

Gotta do more adjustments or look for a Compaq EGA card that has an internal display header.

Also swapped the floppy card with an XT-FDC + serial card and flashed a modded BIOS to see the LPT port with the address 378h.

Gotta 3D print some custom expansion card brackets for both the EGA card and XT-FDC so they can be screwed in without having issues getting loose.

I'm just about to finalize my XP/Vista dual boot build.
I added the CMR-225 docking bay and a 320GB Hitachi hard drive of my dead then reanimated then dead again G565G laptop I used during college.
The XP SP3 installation I had on it didn't really care. Booted up without any issue and after installend the drivers, it seems to run. The only thing is that it seems Metropolis Launcer now crashes.
Also I had 2×1GB Kingmax DDR2-800 and 2×1GB Hynix and it seems one of the Hynix sticks failed for some reason. I wanted to replace them with identical Kingmax anyway.

My heart felt warmth 😀
That is beautiful. I wish I had some nice case like those.

Playing musical chairs with resources for my triple sound card build. Three cards normally isn't too bad, but these are a bunch of resource hogs, two are PnP and one of those isn't supported by Unisound and had its own crap utility that tends to hang the system if it can't allocate the resources it wants.

Star players:
- GUS (very much the non-troublesome of the three)
- AWE64 Gold (well, if we're going for ultimate late DOS build why not?)
- Terratec EWS64XL. This is the one with the nasty config util.

If i disable the second (external) MIDI on the EWS64XL I can get it all working together - until *any* other (PCI) PnP card does anything different, then it all hangs again and I can only recover by removing the AWE64, booting to get the EWS64 behaving, then shutting down and inserting the AWE64 again... of course I actually *do* want the external MIDI on the EWS64 to work, and this crap involving physically removing the AWE gets tiring, so I'm tempted to just replace the AWE64 with a non-PnP SB16. Too bad about missing the AWE, but I never really liked it that much anyway. Downside is that that does give me SC DMA clicking. Maybe I can convince myself to take another shot tomorrow.

There were several indications that this case is from 3rd quarter 1991, up to and including a sticker on the P/S that said Oct 1991. 😉 Original Seasonic power supply too (not a size I've seen before - width/length is the same as a standard AT/ATX, but about 2 inches of height added, as well as a physical switch out back) - I would not be surprised if these cases housed later 286 16-25 MHz systems in their product run.

I spent half the day putting 400 KM on my car (which is a rarity, since I purchased in Oct 2020, my family put 3,000 KM on it) getting all sorts of retro gear. I scoured several thrift shops along the way and met up with two sellers. I got:

-8 USB (PS/2 compatible) original Microsoft optical mice
-Some PS/2 keyboards
-Three 4:3 LCD monitors
-SCSI 68 pin to 50 pin wiring (external) - not really needed but for $4 I'll take it.
-SCSI 50 pin internal wiring (for the NEC V30 JUKO - It's going to get an SCSI CDROM!)
-TSENG 4000 1 Mb VESA card (which emits very dim text - I'll troubleshoot that later)
-An XT Compaq Deskpro keyboard (paid a good amount, it will also need retrobriting) for the same JUKO V30
-A 256k cache module for a Socket 7 motherboard. I grew sad at the fact that it was pulled from a motherboard that likely went to the recyclers.... Along with the case it was in 🙁
-Speakers. Every set of 90s speakers I could find in the thrift stores along the way. Most will be set up with eBay computers, but I have a comically large AWE speakers. I'm not sure what I will do with those.

Granted I don't have a gus, but I do run a ews64xl and a PNP awe32 together. I initialise the Awe with unisound and the EWS is first configured with the eeprom util (ran in command line safe) and then just init the card afterward. It's been a while now, but I didn't think you needed to assign a IRQ to the midi2. you could just select the address and leave the irq as --. I may be wrong as its been a while. I can fire the machine up and take a look at some point.

I feel your pain with resources. I tried to get a Aztec card to play with my Awe64 gold the and I had to give in the end to save my sanity! They just didn't want to work together.

Upping the filter caps from the newly replaced 5600uF rated parts (every cap had been replaced by the seller, to original specs) to 6800uF components, along with a new Noctua fan has made it absolutely silent. So, the 'scene' recommendation of increasing the capacitance of those two parts was spot on.

I am very, very happy.

I am so pleased. This has been almost a 12 month journey to get a system to the point where it actually works. Now it's a case of adding all of the juicy add-ons I've collected over the last year; MIDI card, RAM expansion, SCSI2SD, external SCSI Zip drive ... and then start putting games on it.

I've already tested it via Gradius II booting from a couple of 5.25" floppies, and oh my word; it is simply amazing. The only thing that comes close to replicating the experience of 'it looks and plays exactly the same as the arcade' is the NeoGeo.... but that's not also a fully-fledged computer.

I've played lots of games via emulator, as well as done a significant amount of coding for it (using C I wrote the same game browser/launcher I'm in the midst of doing for DOS), but using the physical machine is a different experience entirely.