What I usually do in that type of situation is benchmark every graphics card on every platform, then use the results to help me make up my mind.

Did you try installing DIrectX 9.0c on your laptop? My IBM ThinkPad R40 did the same thing with the MIDI driver (would freeze up when playing a MIDI file) and after I installed DirectX 9.0c on my laptop, it was working like there's no tomorrow. If all else fails, reinstall the drivers. I noticed the Audigy 2 ZS PCMCIA card is meant for Windows 2000 with SP4 or Windows XP only, unless there are drivers available online for that, too. I need to install a better sound card than the one that's in my ThinkPad since the MIDI driver doesn't sound appealing to me at all.

Yeah, the onboard sound installer says to install DirectX 8 or some stuff won't work. I tried all the way from 8 to the newest version of 9.0c that works for Windows 98SE.

As for the Audigy 2 ZS, Win98SE drivers are available for the PCI Audigy 2 ZS on the original CD so I figured I might as well see if those drivers would work.

I think it should as it uses the same EMU10k2 chipset.

And to top it off, the Applications/Utilities for the Audigy 2 ZS are compatible with WIN98SE.. even the ones that are downloadable for the PCMCIA version.

Anybody out there have a BETTER method for adjusting monitors?

Sure! Buy a new one that's already focused? *ducks*

If i ever see a new CRT south of 100 that isn't complete crap believe me I'll buy it. I'd like to hunt down a Trinitron display but that's a long shot where I live.

Anybody out there have a BETTER method for adjusting monitors?

Sure! Buy a new one that's already focused? *ducks*

If i ever see a new CRT south of 100 that isn't complete crap believe me I'll buy it. I'd like to hunt down a Trinitron display but that's a long shot where I live.

Yeah, good CRTs are hard to come by. I had to watch a dell P990 get thrown into a shipping container for scrap. One of the last straws before I left my last job.

Decided to recap my Gigabyte GA-6OXT ,and stream the progress, https://youtu.be/HBISXpV3PcM

Everything was gone 5 minutes after I threw it to the dumpster.

And because it was done somewhat quickly, I finally managed to wrench on my "new" moped, it took me 8 hours, but I finally managed to drive my first 50 meters on two wheels! This awesome puppy was made in 1987, stored since early 2000s and today started for the first time in 15 years. Surely today I fell in love with it (though i still love my other motorcycle from 1964 a little bit more) 😀

I played around with some ecc ram modules I had gotten for free to check what size they were and if they worked. First I removed the non-ecc 256Mb module from my pentium 2 build. Then I put the first one there. It worked and it was also 256 Mb module. Then I turned ecc on in bios and everything worked fine too. I did the same for the 2 other ecc ram modules, but they were both only 64Mb each. Then I changed bios back to non-ecc and I tried putting my original non-ecc 256Mb module and the 256Mb ecc ram module there at the same time, but unforunately when the pc booted, it only showed 256Mb of ram, so it was like the the ecc ram module wasn't there at all. I did also benchmark each of the ecc modules using speedsys and they were all about 5% slower than my original non-ecc ram.

Testing out some more of my old systems from storage today. Tested out 4 PCs, only found 1 dead - but not a big loss.

1st up: An EMachines eTower 700DVD. Couldn't find out the motherboard exactly, but some Googling seems to suggest Anaheim 3 Rev. F, Socket 370. Has an Intel Celeron 700MHz installed, with 192MB RAM & 20GB HDD.

Was trying to use some sys info tools from several DOS boot disks to check further information, but every single one of them was simply causing the PC to freeze. System is otherwise working and was running Windows 2000 Professional, very slowly I must add.

This is pretty much my only Pentium II-based system, but as I have no need for it at the moment, I've swiped it's Sound Card to use in another PC. I've got several spare PII CPUs in storage, so I might see if I have a faster processor that is compatible with this motherboard.

Graphics: ATI 3D Rage Pro 8MB AGP, Sound: C-Media CMI8738 Onboard. This PC has Solaris 10 installed as it's OS, I think I was experimenting back in the day.

According to the motherboard manual, this PC might support a Slot 1 Pentium III 550MHz, of which I have 2 spares in storage. Might give that a go at some point, as well as adding some more RAM - I'm sure I wasn't trying to run Solaris on 64MB back in the day, think I probably took a stick of RAM out over the years, to use in another system.

Finally, the dead system: Was a Compaq Presario 5420, with a Gigabyte GA-5SMM Socket 7 Motherboard.

Not a major loss and as this board is ATX, I can reuse it's case for one of my other motherboards in storage, possibly a Socket A Athlon XP 2400+ system. I can probably even reuse the CPU in a spare Socket 7 AT board, that just needs a new case. Lots of projects to keep me busy 🤣.

My retro activities didn't stop there today either, been quite busy - was playing around with the drivers for a PCI Sound Blaster Live! 5.1 in 1 of my Pentium III systems. It brought back all the bad memories of how awful those cards could be, no wonder they were cheap back in the day! I'll probably end up removing it and putting back the PC's original sound card from when it was purchased - an Aureal Vortex 2. I think I only removed that card back in the day, after upgrading to Windows 2000 and later XP, as driver support for the Vortex 2 was obviously lacking.

I decided that the zip-tie and electrical tape hackery that was holding my DB50XG in place would no longer do.

Stripped everything out of the case:

Drilled and tapped holes for standoffs:

Mounted the kit and kaboodle and wired the DB connectors together.

Much better than the old kludge. Now just to reassemble the rest of it...

Such a nice system! And Kudos to another Mechwarrior 2 player, athough I prefer the PCX2 version.

Such a nice system! And Kudos to another Mechwarrior 2 player, athough I prefer the PCX2 version.

I only ever had a bargain bin copy of Mech 2 growing up - one that had both the Win95 and Dos versions on disk, but seemingly no music - but I picked up the ATI version a while ago at the thrift store.

Tested another old PIII system from my collection today (found it gathering dust under my bed) and glad to see it was also still working:

This PC is running Windows 7 and surprisingly it's running ok, certainly usable for light office based tasks, which is what it originally did.

Also today I've been trying out several sound cards in my Tualatin Celeron 1.2GHz-based system. Settled for now on an ISA Opti Audio16, seems ok for DOS compatiblity. This PC dual boots Windows XP and there are no drivers for that, so I may have to put in a PCI Sound Card for XP usage.

I had intended to use my ISA ESS AudioDrive ES1868, but whilst it would function in XP, strangely I couldn't get any sound output from 98 even though the driver was installed correctly. Probably a compatibility issue with this PC, shame. 😢

Spent *way* too long trying to set up my MSX printer on my modern Linux workstation.

Result: I can cat text files to it from the command line.
I still can't print from applications that use the CUPS driver.

That was entirely worth my time.

Did a bit of inventory and almost had a heart attack. Thought I lost this. Found it in my dell C/Dock. I know it's a piece of junk, but it was the first computer component I bought and upgraded my PC with.

At least it's not staircasing. I'm not sure what your printcap consists of for filtering, but you've got that right, so kudos!

At least it's not staircasing. I'm not sure what your printcap consists of for filtering, but you've got that right, so kudos!

I didn't even know that was a thing ??
Honestly I just plugged it in with a USB -> Centronics interface and it worked fine as a text-only console printer. Finding a compatible CUPS driver has proved impossible but there may be one buried in there for all I know.

Yes, it's slow, faint, has no concept of page size or margins, and regularly pulls its paper out of alignment meaning you have to be on standby to make manual adjustments as it's going, but hey, it works! I have stacks of tractor feed paper and like three NOS ribbons, so may as well use it. 😉

In any case, DAT SOUND.

Did a bit of inventory and almost had a heart attack. Thought I lost this. Found it in my dell C/Dock. I know it's a piece of junk, but it was the first computer component I bought and upgraded my PC with.

My first upgrade card is still in use. A Galaxy GT520 1GB, fan died but meh runs fine without it. Currently resides in my HTPC pushing pixels via it's HDMI port. Will likely continue in this fashion until it fails and I can no longer repair it.

Im pretty sure I bought it new on Amazon when the Fermi cores weres only a couple years old. I think the GTX 780 was top dog then.

Yes, glorious! Now you can print off DOSBox source code and wallpaper your room!

I still have to find a place where I can listen to old line printers in action. Even in footage, they sound like the screams of tormented Cobol programmers all crying in unison. 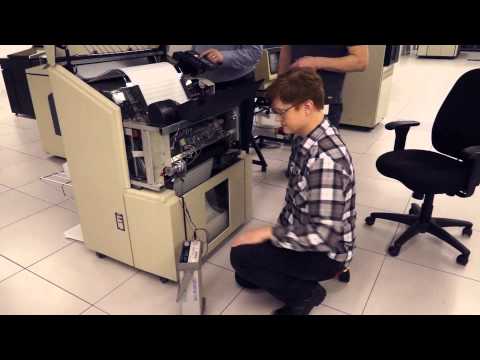 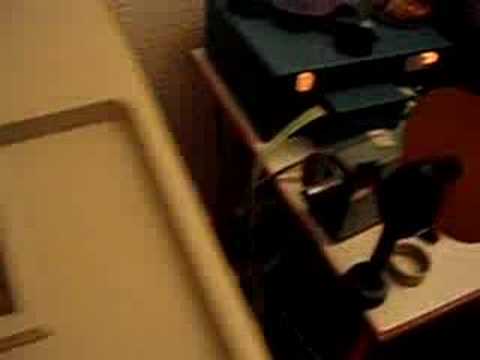