Apparently the "ETEQ" chipset is actually an MVP3, so not bad.

One thing I never figured out on these is... where is the fan header?

Not all boards from this era had a fan header. This only started becoming common practice on ATX boards.

I've found it eventually, in the most unexpected place! It's right above the PSU jumpers (between the last two ISA slots at the bottom) and it only has 12v and GND.

Try the Lucky Tech P5MVP3. It is good, I own it. VIA MVP3 chipset and works good with Windows XP too. It have the color changeable Award BIOS!
PCBytes, I have the same motherboard, but mine has 512KB cache with TMTech chips.

I have the same exact board, rock solid!
cheers

Meanwhile is other thread i found this:

However, for any sort of modern usefulness, the VIA chipsets that I've seen have a limitation of 128mb of RAM per DIMM slot, meaning that the typical board is stuck using 256mb/384mb RAM. Some ALI boards have hacked BIOS files available that allow them to use 512mb Modules for 1.0-1.5GB Total RAM.

How to recodnize them? I have couple of 16 chips double sided sticks, no luck.. anything special. I would be really nice to know exact models, which i can order and test it..

Runs very stable in regression testing with DOS and Win98se and benchmarks high.

I'm probably in the minority here, but I don't even see the point of overclocking old PCs, unless you're into that sort of thing and that's your primary objective to begin with.

I mean, if a game runs too slow on a K6-2 450MHz it will probably not be that much faster on the same CPU at 600MHz (law of diminishing returns of SS7 and all that). If you need more performance, just build a faster Pentium III or Athlon machine.

Agreed. From 400Mhz to 500Mhz you will see a ~ 18-20% difference, but going higher, performance percentage will diminish greatly.

Differance between K6-2 300 and 400 is tiny (around 11%), but with K6-3, it scales much better. (thanks to cache), particulary in more demanding benchmarks, as the last one. Conclusion - for me, I would not take K6-2 too high, rather, preserve it, by undervolting it, so it lasts longer.
K6-3 on other hand, is worth to take at high speeds, because it scales much better thanks to on-die cache. Same with K6-2+.

The ali board you are pointing at at ebay doesn't have agp....

^This. I prefer the AX59 PRO over the P5A since the asus can be very quirky, especially regarding the AGP slot (weak voltage regulator depending on revision). But if you get a hold of a late revision P5A board, it's great to use and quite stable once you sort out any potential issues. For my build I ended up with an early revision board, and did a full recap + voltage regulator upgrade (both AGP and CPU VRMs) and it's been rock solid (as asus would put it) for almost a year now.

The AX59 PRO works great out of the box. AGP performance is superb (for a super 7 board that is). It also comes with 1 or 2 MB of L2 cache witch means it can cache quite a bit of ram (I use 256MB on my 2MB board) with no performance penalty. It's also a great overclocker. After a complete recap, it can run my K6-III+ at 550MHz and my K6-2+ at 600MHz perfectly stable (600MHz only seems stable with on motherboard cache disabled).

Another great board and quite common in east europe / asia / russia is the Lucky Star / Lucky Tech P5MVP3. Performance is not as good as the AX59 PRO, but it's quite stable out of the box and AGP performance is satisfactory as long as you don't stick anything faster then a Geforce 2 Pro / Radeon 7500 in there.

As a side note, from my experience MVP3 and ALi Alladin V super 7 boards are not very stable with most nvidia video cards due to what seems to be a driver issues and perhaps a low-budget AGP implementation on said chipsests. It seens to be more severe on ALi chipsets. I've had great results using ATi Radeon cards on super 7 builds, particularly the Radeon DDR and Radeon 7200/7500. Even the Radeon 8500 will run fine on these boards, but it's performance is severely limited by the CPU's lackluster floating point performance. Early radeon drivers are recommended. The lastest driver I've had success with is Catalyst 3.8

Surely once you have a radeon DDR in there any better GPU will quickly run into diminishing returns?

It was mentioned. Check the rest of the pages.

It was mentioned. Check the rest of the pages.

Well people keep saying the asus p5a as best ss7 board, while the gigabyte it's a bit faster at the same settings, it supports the tillamook, it doesn't have issues with k6-x+ cpus as the latest asus revisions, furthermore it allows (in later revisions) to reach higher fsb.

I think this board had been mentioned in this thread already but I think the Iwill XA100 Plus (Rev 1.3) had to be up there as one of the best Super Socket 7 boards. Really stable, K6 + support and what I think is its defining feature is the SoftFSB in the bios.

I run my K6-3+ 450 on this board at 550mhz (5x110fsb with all caches enabled). Its the SoftFSB in combo with setmul which really makes this board a winner. 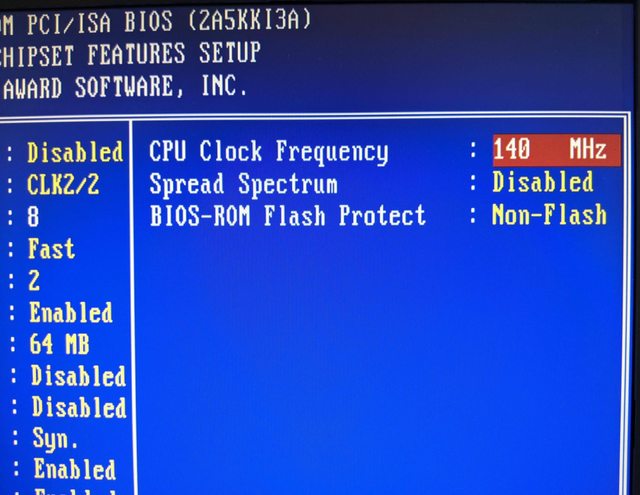