I didn't know this could be done until tonight, but about 2 years ago I bought an AT computer with an Epox Super socket 7 motherboard inside, and later
found out that the cpu socket locking latch was broken. I've managed to fix it with a donor motherboard that had a socket 5 on it, the latch is the same.
It's actually quite easy to separate the 2 parts. A 10mm wide flat blade screwdriver fits under the back and lifts it up a bit, not too much pressure, then
insert another similar tool into the left back notch, jiggle it a bit and it should release, then the rest can be easily released and the top removed.
Due to the location of caps, etc, other motherboards may require a modified approach.

I have a EP-MVP3G2 Super Socket motherboard, and curiously, it is stable if I do not have installed a heatsink. Just putting it on top of a CPU makes no ill effect (except the CPU would remain cool), but attatching the clips makes it misbehave; as in it does not post at all, or all kinds of weird crashes and hangs start to happen (like, in BIOS and while starting MS-DOS or loading himem.sys). I conclude that either 1) there's a hair fracture on the MB and the very minor flex caused by the clip causes non-contact or 2) the CPU socket is damaged somehow (it is entirely sure that the clip is too strong to begin with).

However, I changed to another heatsink (a larger one but a different clip), and now it is stable ... for now! I was just considering that in case the problems re-surface (which they eventually will), I'd search if it is possible to dismantle the CPU socket to see if there's any apparent damage, and found this post. So, now I know it is possible, and from the looks of it not even that difficult!

EDIT: Press enter and something something while quickposting and post a totally incomplete reply
EDIT2: TYPOs

That sounds like you're putting too much mounting pressure on there. That can definitely cause CPUs to not be all that happy.

Ampera: Yes, that is certainly possible. I kind of mentioned it in my post, but didn't give enough details; the problem is that real Socket7 coolers are difficult to come by - especially quiet ones! Those that are supposed to be "glued" on the IHS are not on acceptable sound level IMO, provided you can find one (they are adequate for cooling and usually what these were shipped with)!

I believe (I can not be sure) all coolers I have are actually socket370 or socketA coolers - they have similar / compatible attatchement clips, but the CPU "thickness" is different on those sockets (neither socket 370 nor socketA CPUS had an IHS). It is worth to point out that of these "beefier" coolers have worked fine on this board for years, but I believe the repeated installing of heat sinks with too strong a clip might have damaged the socket 😒. (also, I believe the CPU itself with it's IHS is fine with the pressure, but the socket is the weakest point).

No time to play with retro PCs, but finally I tried to dismantle my socket because of the above issues; I "succeeded": 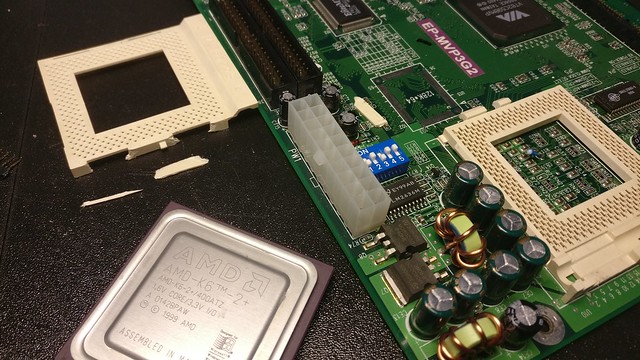 The thing is, that the plastic is very soft but brittle. It does not bend away enough for the upper part to be lifted without it possibly breaking apart. There could be different kinds of plastics used by different manufacturers - or, plastic being in different state because of different average temperature, UV radiation, humidity and whatnot over the 20(+) or so of years these motherboards have existed.

The good thing is, the socket works fine with some of the edges broken!

Point here is: don't fix what ain't broken. But this MB was not stable...

After doing the dismantling, I've noticed that the sensor chip on this motherboard is broken. No fan RPMs are reported - ever. But if I insert a fan to a certain header (that still outputs voltage, the others don't work at all) the BIOS will hang if anything tries to read the RPM. Some of the instability could have been caused by it previously! IT is even possible I've destroyed part of the socket for no gain 😊