OK and it's good that you are testing SIV on elderly laptops. I am still puzzled as to why SIV could not read the DIMM SPD data when you ran WXP on it though.

I tried SIV on a Savage/MX and the clocks were wrong so I have adjusted the code. Please will you try the attached SIV32L 5.43 MCLK-03 on your HP OmniBook for me? Put the new SIV32L in the same folder as you have Beta-02.

I am mainly interested in what Menu->Machine->GPU Info reports.

To be quite honest, I have no idea why the DIMM aren't being reported (even CPU-Z won't report the SPD data for some reason, haven't tried AIDA nor HWiNFO32), I do know that they are both 128MB (if I'm not mistaken, there are two of them so 256/2 = 128) they have no markings on them whatsoever, well they used to have, but the sticker fell off on both of them (that was to be expected 🙄).

So I'll get the Omnibook ready for the testing (still need to get a driver problem solved, Windows won't stop nagging me with a "SMC Fast Infrared Port" popup all the time) and will report back on what SIV will return this time.

(By the way, do you know where I can find a driver for a

(By the way, do you know where I can find a driver for a

I guess you are looking for the irda driver, have you seen https://support.hp.com/gb-en/document/bps80102?

Maybe the missing DIMM SPD is down to an SMBus multiplexor, Martin does not know if there is one so I doubt HWiNFO will report it, but I don't know if AIDA64 will. If it does I will find out how to drive it. I used to have the same issue on my Compaq W6000 and one day it irritated me once too often so I toggled the GPIOs 😅, after a couple of system powerdowns I found it was controlled by GPIO 18 and now SIV reports the RIMM SPD 😁. Notice how there are 2 SMBuses with the RIMMs being on the second SMBus. 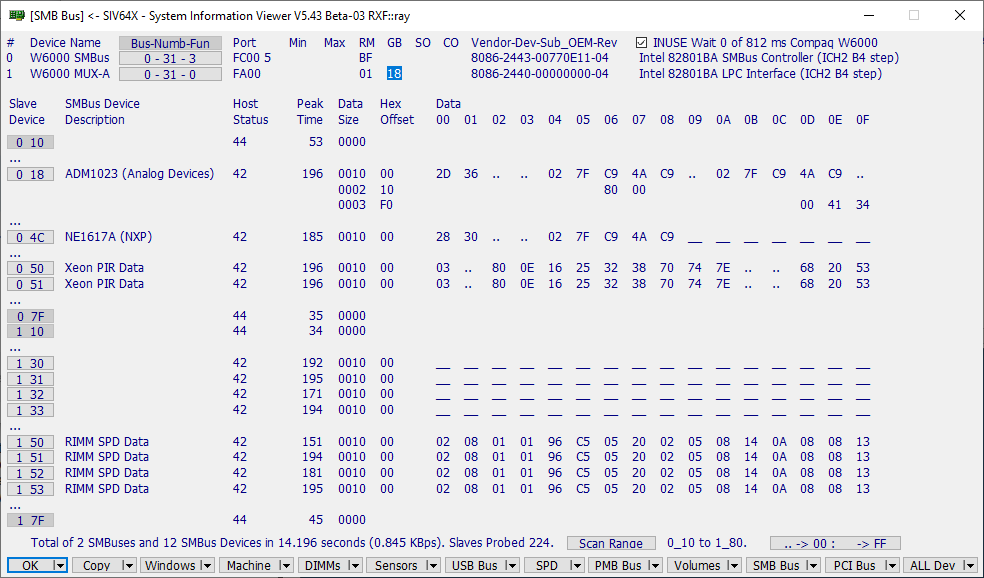 Unfortunately I've already looked at that page but it's covering older Omnibooks (and I have a Xe3-GC).

By the way, the IrDA port works under Win98SE but in Win2k I get a code 10 with Windows stating that the "INF file doesn't match the class of the peripheral" (or something in these lines), and it keeps nagging me with that every time I start it up or when I plug in my USB drive, I don't really know why it's doing that... On my previous Win2k install it worked fine 😒

I've managed to locate a few drivers for the SMSC IRDA thingy that the XE3 has... I hope these will work, I mean I prolly won't use Irda that much, but I always wanted to try to share files between two laptops through infrared (I happen to have a Armada 1700 that also has a IRDA port, but it's not working right now, I need to sort out a fault with the motherboard..) to see how did it work back in the day 😁

Seems like the odds really are against me this time, it appears that Win2k corrupted itself again... It would no longer recognize the GPU driver (would also complain that the INF file didn't correspond or something like that, I tried with thousands of S3 Savage drivers and all of them refused to install)... And then it wouldn't recognize anything, no more touchpad no more network card nothing.

Time to reinstall it again *sigh* 😢

I think I figured out why Win2K kept getting corrupted... So, as you may not know, the battery is dead and therefore I am obligated to let my laptop plugged in... Well it turned out that the outlet the laptop was plugged into had a fault, and if I bumped slightly the AC adapter, the laptop would have a "micro surge" where it would lock up (a bit like during a brownout), but the surge is so small that the laptop doesn't have the time to shut down... And when this happens, I can hear the hard drive shutting off and restarting, so it's possible that the surge somehow caused corruptions (if it happened while the system was writing something...?)

So I plugged the laptop into a different outlet, and for now I no longer have data corruption (still very strange given that NTFS is slightly more fault-tolerent than FAT32 is).

But still that is well the first time that this happens to me, let alone on a NTFS partition!

Anyways, here is what you requested, both TXT log and raw dump files are included.

Anyways, here is what you requested.

Thank you and sorry for the delay in replying, you having notebooks reminded me I have a Margi Display-to-go 4MB and I have been getting SIV to correctly report it's clocks.

The test SIV worked as I hoped and the S3 Savage/IX clocks look good to me and to my surprise one set of DIMM SPD was reported. This makes me wonder if it's just a bad connection, have you tried reseating and/or interposing the DIMMs?

I am pleased you sorted out your W2K issues and once you told me it was a HP OmniBook XE3 GC I felt SIV should display this rather than HP OmniBook PC, so Beta-03 will.

I haven't really messed with the DIMMs yet (well as a starter, this laptop isn't exactly the easiest to work on, but I've seen way, way, way worse thankfully), they're still the original ones that came with the machine, although I swapped them (DIMM 1 in slot 2 and DIMM 2 in slot 1),when I got the laptop (as only 128mb was being recognized), I'll try cleaning the contacts with Isopropyl Alcohol and see how this goes.

If that don't work, I might just swap them for 2x256mB DIMMs and call it a day.

By the way, I found something pretty neat: https://www.hp.com/ecomcat/hpcatalog/specs/F2337WT.htm I wonder how HP didn't remove that page (as it's often the norm these days, they purged anything legacy, and others will follow suit, such as Intel 😵 good thing that the Web Archive wayback machine is a thing).

I've also seen that there was other models of Omnibook XE3s, of which I can't find anything about them, I'll list them here:

About the GD and the GE, I could not find anything on them, the only reference I could find is in some kind of manual: https://www.manualslib.com/manual/71748/Hp-Hp … e3.html?page=18

But I also found this chart (from some HP documentation) showing the different Omnibook Xe3s variations, it's sure handy given that the XE3 is a obscure system!

The GF must be a later model that uses one of the Intel 830 chipsets rather than the 440BX, I also suspect it will be a P-III Tualatin.

I have not seen any other Xe3s other than GCs or GEs, so truth be told, I have no idea what the GF could have used (be it a Coppermine or Tuala)

So here we go, the DIMMs are both reported to be made by Infineon (which would be correct, as the chips on them were all Infineon-branded).

DIMMs are both reported to be made by Infineon.

Thank you for checking out Beta-03 and I am pleased to see that SIV now reports HP OmniBook XE3 GC.

It's strange that they are both the same but only one of them reports SPD, I wonder why 😕

Yeah it's a bit strange, there are indeed two DIMMs, it ain't a big deal since I intended to swap them for 256mB DIMMs anyways.

If you have a S3 Trio3D/2X (86C362) please will you post a similar screen shot so I can check SIV detects it as a 86C362 and correctly reports the clocks. 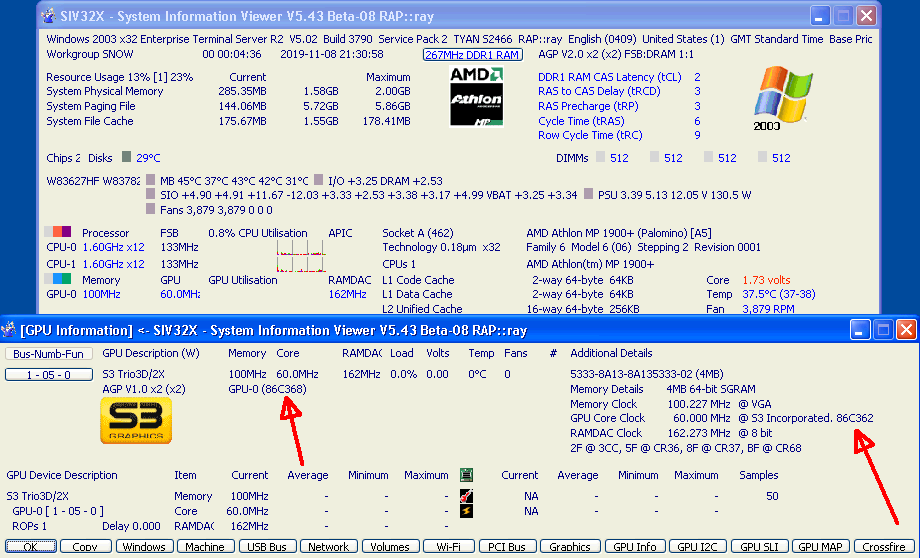 That's actually a Trio64V2-DX that I have, but I'll try anyways whenever I'll have the time alas 😒

Again, I'm sorry for the long delay, the P133 rig has started giving me troubles again... Among this, I'm afraid I won't be able to do much testing on it anymore as the PSU is starting to give in and output garbage voltages (4.80V on the 5V rail...) so to not to risk the system any further.

Additionally, I don't have any system that has a AGP port, and AFAIK S3 Trio3D/2X cards were all AGP (unless there was a PCI version that I can't find).

So I'll let someone else test this...

How did you get the reading for the Trio3D/2X? To my knowledge, cards with 100mhz memory have a higher clocked chip. It seems to me that models with 86x362 are clocked lower than 86x368 but I am still playing with these cards. Does SIV 5.43 Beta-08 support Win98SE? I have a lot of these cards and I can send results over time

Thank you for your interest.

Is it possible that SIV calculates the chip's clocks incorrectly? I think that RAMDAC should be 230 MHz. 86x362 and 86x368 are practically the same except for the amount of supported memory and its types. I will try to find some cards today.

Do you need the app testing on VIA Eden, C7 and Luke CoreFusion? I have several ITX boards with BGA chips that I plan to test over the next couple of weeks, so it would be the ideal time to test SIV and CPU-Z if either needs it.

Also is the list on the first post up to date? I am sure I can test some of the early GPUs you list, if still needed. I plan to start testing and benching ITX boards with BGA chips on Boxing Day.