There are a couple different models of the 6x86MX-PR233, each running at different FSB and multipliers for a variety of different internal clockspeeds.

The ones I am particularly interested in are the 66MHzx3.0 and the 75MHzx2.5 variants.

In the case that they are multiplier unlocked (which I think they are?) can the latter be reliably run as the former, or vice versa? Is either one of these two generally the better binned silicon?

And I would always choose the higher physical clock (and an IBM part if possible) then set bus and multiplier myself, back in the day I upgraded my 75x2.5 IBM MII’s motherboard to pc100 and ran it at 95x2 for years.

That said...
But some 6x86’s just completely are missing certain multipliers by design
for your purposes you’ll be fine as your not trying to over clock using a high numeric multiplier

I have the option of choosing between these two IBM CPUs: 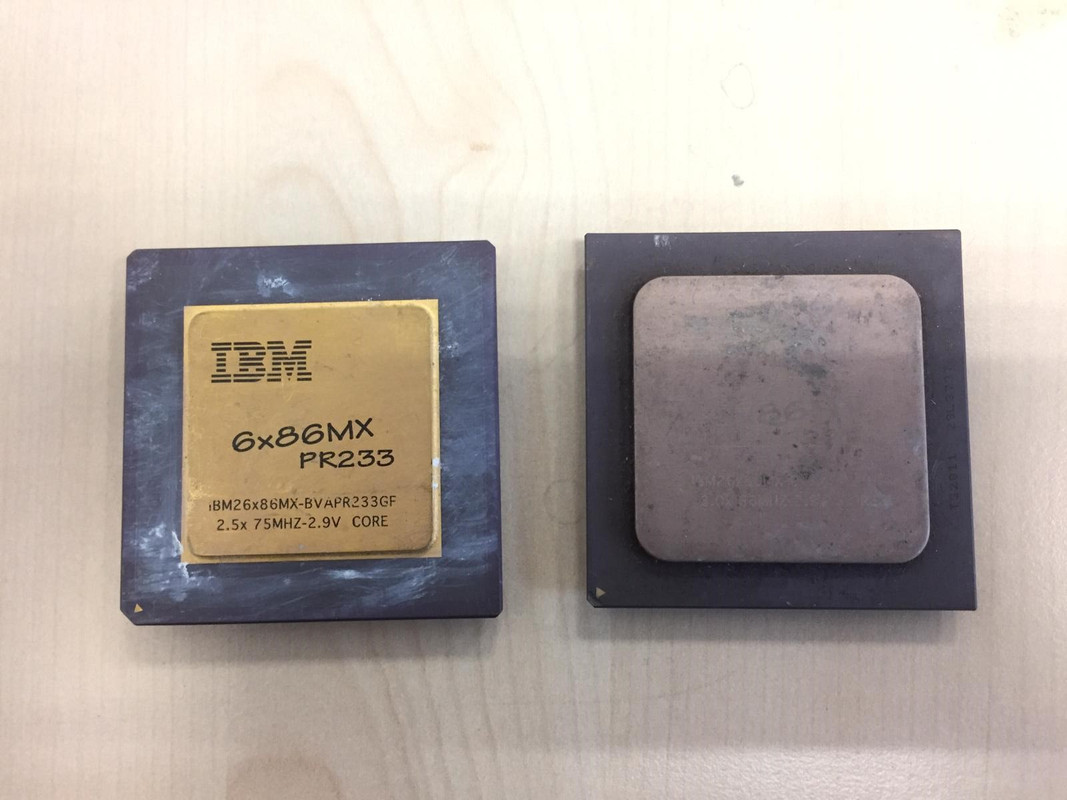 IIRC these MX and MII versions run at their default multiplier and lower ones. Like the 2.5x model above does 2.0x as well.
They kinda support 1.5x and 1.0x multiplier, but crap out at bootup when caches are enabled.
The 6x86L seems to run fine at 1.5x and 1.0x, with caches enabled.
I noticed that an MII responds to multiplier jumpers while the system is running. Though it has to be changed very smoothly, like with a switch. That way I could even get 1.0x working without issues.

I’ve been working though my boxes of old hardware and just got up to the 430tx era. These boards made good homes for my cyrix cpu’s. The k6 chips that I have are all low voltage, and I hate to put a 2.0v chip in a board that only goes down to 2.6v. The intel chips that I have went to OEM boards that didn’t support flexible voltages or bus speeds. By process of elimination, cyrix was the choice.

Even though the boards only go to an 83mhz bus, I was able to run the MII 366 at 83x3 almost as nicely as the 100x2.5 that the spec sheet lists, and at that speed I was able to get a stable build using surplus EDO ram. So that combo worked out well for me. The other TX board got a 6x86mx at 75x2, but Im sure it would have done well at 66x2.5. Also a stable build, also used up old EDO ram. The boards don’t support AGP, but these chips were never going to play Halflife anyway.

I have some via super 7 boards , but those seem like better fits for the K6 cpu’s since they will do the voltage and bus speeds that those chips want. if I can ever get them to boot. Which hasn’t happened yet.

Your available hardware is probably different, but maybe you will have good luck with the cyrix chips like I did. Just don’t expect to get great over clocks out of them.

I asked for the 66x3 part but it turned out to have a missing pin so instead he shipped the IBM made 75x2.5.

We'll see how well that goes with my 430TX board (that appears to have 75MHz support..). I will be running it with PC100 SDRAM, which should handle 75MHz just fine.

I spoke too soon about being stable at 83x3. I was so concerned about the memory working, that I didn't check the PCI video. It doesn't like the 83 mhz bus. I changed it to 66x3.5 and it seems to like running windows now, even if it is a little slower.