Hey guys, I'm pretty new to Slot 1 and was wondering if the heatsink that's on this 400 MHz Pentium II is big enough for passive cooling or should I attach a fan to it (I believe the CPU heatsink combo came from a Dell)? Or perhaps I should maybe get a different heatsink? Open to any suggestions as I don't want to accidentally overheat this thing.

definitely big enough but you will need a case fan nearby to circulate air. if this was a dell it would likely have been vented from the fan on the power supply or a shroud pushing air from the back case fan.

Alot of oems used that style heatsink and had a plastic duct leading from the rear exhaust fan to the heatsink. I personally would keep that heatsink and mount a fan to it. As long as the current one isn't riveted in place you can look for other slot 1 coolers but just adding a fan to that one will work well.

You don't need a fan directly on a heatsink that big, but it would be good to have some airflow inside the case, moving over the heatsink. Like an intake fan in the front and an exhaust one in the rear, which is a standard configuration even in more period correct cases (if you're using one). Even a small amount of airflow is a drastic improvement over none, when it comes to removing the saturated hot air away from the heatsink.

Alright I'll probably rubber band a fan onto it or something then. Will also see if I can get it off to replace the thermal paste

Alright I'll probably rubber band a fan onto it or something then. Will also see if I can get it off to replace the thermal paste

Not sure if that is Secc1, but if it is.... you can change the terribly infamous plastic spring thingies holding it all together with a threaded bar of the right diameter and nuts. Everytime i take a Secc1 apart, one of them breaks.

It’s most likely from a Dell XPS R400 or other Dell of that period. Here’s a photo of that exact heatsink in the original Dell case. They just have an 80 mm case fan nearby without a duct. Later models with the SECC2 PII and PIII used a much smaller heatsink and a black plastic duct. You’ll likely be fine with a case fan.

I have a 300MHz Klamath and 333MHz Deschutes with a tall heatsink like that, and a 400MHz which has a similar but shorter heatsink (stands only as high as the CPU cartridge).
I think the 300 and 333 both came from a pair of Dell XPS machines that I stripped. I kept one of those cases.
I've used them fanless with some open air testing and such, but they get so hot you can't touch them without burning your hand.
As you'd expect the 333MHz Deschutes runs the coolest, under stress I remember it being 10C cooler than the 300MHz Klamath. Not sure about the 400MHz Deschutes with the shorter heatsink, I just remember burning myself the first time I used that one.

It was good enough for Dell but I think I'd be uneasy running them that way in a permanent build, except maybe if I was rebuilding the XPS mentioned earlier.
A concern of mine is how much heat it conducts to the motherboard VRM. My XPS mobo was an Intel AL440LX or whatever, and 440BX versions would be SE440BX-1/2/3. Those are high quality motherboards and also not super valuable so I'd be a little less worried about them. If I was using a retail DIY board of some kind like an ABit BE6 or whatever, I'd definitely want to dissipate the hotspot that the CPU is creating.
If you're worried about it, a modest fan as you've suggested would go a long way.

The nice thing about a big heavy heatsink like that is if the CPU fan dies, it'll be okay.
Downside is that it's heavy. Since you're new to slot-1 I'll mention it needs a support bracket which really isn't optional with one that's as heavy as this.

I've got a similar set up to yours where the PSU fan is located directly above a 1 GHz Slot 1 P3 and it has worked reliably for years: 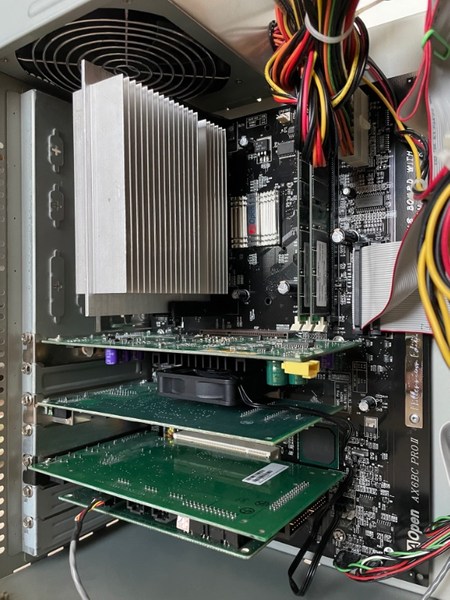 edit: However, I see that the orientation of the heatsink "fins" might not be optimal for airflow towards the top of the case for you.