Motherboards that turned out to be surprisingly good (for a change)

I haven't been in this hobby for too long, almost five years actually, but I had the chance to try my hand on a few score of motherboards and found some to be exceptionally good despite the brand or the model's nefarious online reputation.

One of these was the PCChips M560TG. In theory it's a toxic combination of PCChips and a rebranded chipset, but in theory it's a well built motherboard with a fast IDE controller, actual L2 cache, rear PS/2 socket, SD-RAM compatibility, hassle free USB, CR2032 battery holder and support for a very wide range of CPUs. It's also DAMN fast. Suffice to say it has eclipsed the 430TX options in my collection to become my go-to AT motherboard when I want to throw together a Socket 7 PC. 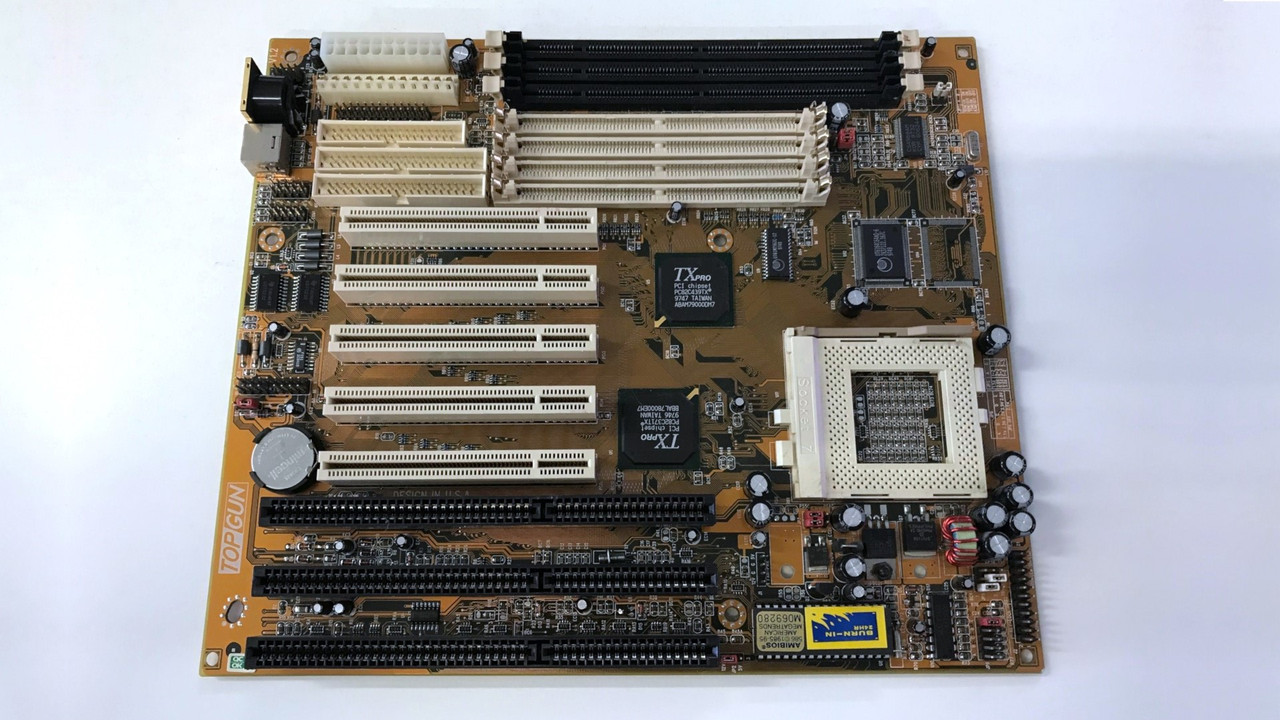 Are there any motherboards that surprised you in a good way?

It's astoundingly well documented with sites like this and this containing multiple BIOS versions (both official and modded), PDF user manuals with jumper settings, complete pinouts for all the on-board connectors (including PS2, USB and audio) and even multiple versions of the driver CD.

The M571 also comes with an on-board CMI 8330 sound card which is one of the few that support SBPro, SB16 and WSS functionality. The board has been rock solid for me with a Pentium MMX 166. Supposedly, it can take up to K6-3+ CPUs with a modded BIOS, but I haven't personally tested this.

ALI M1217 based 386SX mobos. Especially the -40 variant. There's nothing special about these mobos, just cheap no-frills 386SX, but they do "just work", I've yet to have any annoying issues with any of them. Also, no cache but the chipset is plenty fast and with 0WS RAM settings (you do need 60ns sticks for 40MHz CPU) it easily gets close enough to cached mobos to be impressed. Other nice features:
- socketed BIOS and keyboard controller (sometimes also the 6818A RTC/CMOS)
- tantalum caps, I know these can blow up and catch fire but tantalums are also long-lived unlike cheap electrolytics
- not a lot of SMD parts, really nice to work on if something does go bad (well, except the chipset obviously)
- I was lucky to not get any spill damage but these would be way easier to repair unless the corrosion was very extensive
- the chipset actually fully supports #A20M, #FLUSH and #KEN signals for 486SLC/SXLC chips, all you need is hot air station to remove the existing 386SX
- the BIOSes I have also have full detection and support for the SLC/SXLC CPUs, even if otherwise a bit bare-bones (but there is HDD detection)
- even the 386SX-40 is plenty fast for most DOS games, this mobo is really plug-n-play solution, all it needs is VGA and HDD controller and it just works
- there is a socket for 387SX if anyone wants/needs it, no issues with that either

Maybe it's just me but I like these mobos.

OEM boards with onboard VGA in low-end vendor systems rarely get much love, but this one deserves it. Combined with a Celeron CPU (preferably one with cache...) this is a pretty zippy platform. No 100MHz overclock, but solid Intel chipset performance at 66MHz (and can even be upped to 83MHz with SoftFSB). Onboard video is an ATi Rage Pro Turbo, not great, but far better than later integrated muck. And sound came courtesy of a Yamaha YMF740. All in all a very nice litte (uATX) DOS or Win95 system on a single elegant and rock-solid board.

That'd be my Shuttle HOT-555A, at first I didn't like too much this board (especially before I figured out there was a jumper I had to close to use a PMMX on that board, but I digress), but once you figure its quirks out (like that jumper I briefly mentioned), it's a pretty solid 430VX board that doesn't give too much grief nor frills, I'd say it could make a very good starter Socket 7 board.

I also have an Intel MU440EX that (last tested fall 2020) still worked just fine. Also all my Asus P2B-F still work as new w/o anything done (not even a recap).
The PcChips m912 AKA Amptron DX6900 versions 1.4 and 1.7 also are suprisingly great old 486 VLB boards that just plain work as long as you set the jumpers proper...

It comes with a VLSI SCAMP chipset, but its bios is really interesting. I can tweak the memory settings and make the RAM go really fast. I can also change the divider for the turbo button between 1/1 and 1/4.

It comes with a VLSI SCAMP chipset, but its bios is really interesting. I can tweak the memory settings and make the RAM go really fast. I can also change the divider for the turbo button between 1/1 and 1/4.

I believe I also own this board, or at least a very very similar revision by another producer. It's in my 386SX build where I play AT era 1987-1989 games. It is indeed a very easy board to work with. 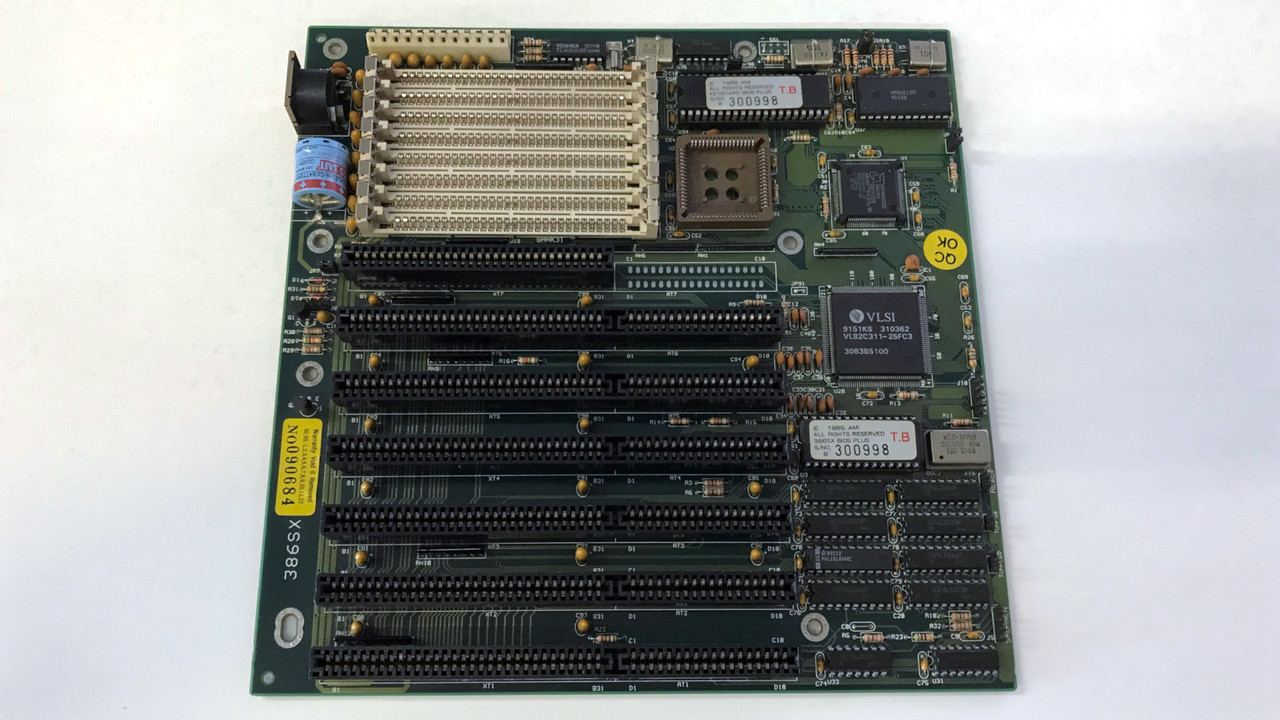 Any of the Mini ITX VIA EPIA motherboards - EPIA 5000, EPIA 800, EPIA-M - all slow compared to anything else made in the era, but the most reliable and solid boards I've ever come across. Always found them a joy to configure and setup.

Any of the Mini ITX VIA EPIA motherboards - EPIA 5000, EPIA 800, EPIA-M - all slow compared to anything else made in the era, but the most reliable and solid boards I've ever come across. Always found them a joy to configure and setup.

These systems are really nice to work with and are quite under raited.

Pcchips M912/919/921 depending on how you like your vlb and PCI combinations. With real cache they are super versatile and great performers.

My late 90s build, in the day 90s, I had all of about $100 and wanted a new machine... I found this board at a closeout warehouse, I think it's right name is an Octek Rhino 20+ ATX format but AT power too, 430TX, but nothing much above a 12 gets many mentions on the web, maybe they were going tits up as they were releasing the thing. So for rather few dollars I get it... and a K6 to put on it, get the low voltage K6 says the interwebs, the 3.2 will fry your board, hokay, one "low voltage" K6... somehow I thought I was ordering a 233.. but I got a 266, two point FOUR volt chomper, which was barely just released, AMD had this kind of thing for flooding the channel THEN announcing the CPU.. oh buggerbuggerbugger I done screwed up, but wait.. there's a 2.4V setting, and the "reserved" jumper unlocks the higher multipliers, woohoo, so I get the CPU installed, along with 2x16 SIMMS and a clunky 1.6GB drive from a 486 box, and it boots, yay! ... hey this things pretty cool temperature wise, maybe I'll try 75Mhz.. 300Mhz, runs perfect... run that a week... hmm there's an 83 setting... 333 yay, feels like I'm flying in the stratosphere now because 400Mhz CPUs ain't been out long, and I'm 80% there on $100... be nice if I had some decent graphics though, patience..... OMG there's a killer deal on a Voodoo3 at outpost dot com, snarf. However, this Voodoo no likey 41.5Mhz PCI, down goes the clock to 300... well this sucks, I'm only getting 113% of what I paid for instead of 125%... oh, holy cow, 400Mhz K6 TWO are under $50 now, gotta have me one... again wonder if I've screwed up... then figure out that the reserved jumper has to come off again to get 6x on 2x... K6Twoooooo powahhhh... and yup, runs nice, bang it up to 75 bus and it runs nicerer... four fiddy... yah, backed up the voodoo3 nicely... was playing new released demos at decent res.. life was good. ... it got SDRAM and better HDD, fast optical somewhere along the way too, and did me 4 or 5 years I think. I was still running it as 2nd machine when I got an AXP rig. So anyway, bit of a little board that could, even though it wasn't super super seveny, it was super enough for me for the little I had "in" it.

I have mentioned it before, but the PC Chips M550 (at least the one I bought) was a great board that lived a long life (initially in my hands and then in those of a friend's sister). Not everything from PC Chips was landfill filler .