Hmm.. this looks interesting... might join the "fight" if time permits... I should have all the necessary parts 😉

Please join us. The more the merrier.

So p3 and athlon @ 850mhz max whether slot or socket

So p3 and athlon @ 850mhz max whether slot or socket

Yes. You are correct.

There has been a slight rule change. The frequency limit on pentium III:s has been raised to 900mhz.

The reason is that the Athlons are faster.

There has been a slight rule change. The frequency limit on pentium III:s has been raised to 900mhz.

The reason is that the Athlons are faster.

Putting overclocking FSB overclocking aside for the moment, since the only Pentium III@900MHz is 100MHz FSB, which can be beaten up (but not soundly thrashed like an 850 would be) by a Pentium 733/133, do you think it would be a good idea to make the Pentium III limit 933MHz? Or is it more about contestants having to rely on their tweaking skills of slower PIII's to get to this limit?

Yeah. Since the Pentium III cpus are slower then the Athlons I wanted to give the pentium III owners more overclocking headroom.

I wan to give the pentium owners a fairer chanse to win the contest.

Yeah. Since the Pentium III cpus are slower then the Athlons I wanted to give the pentium III owners more overclocking headroom.

I wan to give the pentium owners a fairer chanse to win the contest.

Thanks for your continued clarifications and fast response on this topic/contest!

So now the question is, what DDR socket A motherboard runs best at 170 (x5) and has stable AGP overclock so the GF DDR hangs in there.... or is that the trick, Voodoos known for high AGP survival so OPPainter/DDTung tuned settings on AMD761 good, GF DDR needs a 5/2 divider, so KT333/400 etc

Good question. I Know that there are newer socket a motherboards that has problems with older cpus. Be careful. Check the cpu support list before any purchase.

No Athlon or duron with lower then 5x exists as fare as I know. have read the data sheets, 5x multiplier is the lowest for the platform that I can tell.
There are other things to consider to with overclocking Athlons on lat Athlon XP era boards.

Also 5x never worked on my Thunderbird 1400 but I think 5.5x did, that might be CPU dependent but some boards also has problems with some multipliers if the CPU is unlocked and it set manually.
My ASrock NF2 board wont do the 9x multiplier, just refuses to post, 8.5 nad 9.5 works and thats with a factory unlocked 2500+.
Its not always a walk in the park with Older Athlons on modern Socket A boards.
Most budget to midrange Socket A boards simply do not have the Logic required to change the multiplier on an unlocked Thunderbird or Spitfire.
Its because Thunderbirds/spitfire CPU's they use two sets of 4 pins for 8 total, they kind of work like two keys, both needs to be set.
Athlon XP so Palomino and later used 5 pins only, no "double check" so the 5 pins reduces complexity (AMD states in datasheets that this is to make it easier for motherboard manufacturers to implement) but it also gives a higher span of multipliers required for higher clocked low FSB cpu's.

All my Athlon XP era (333+ FSB) Asrock and ASUS bord that are low to mid range cant change the multiplier on Thunderbird but XP works that are unlocked. I have factory unlocked models of Athlon and Athlon XP and also manually unlocked Athlon 850's CPU's with soldered L1 bridges.

I use an older ECS sis based 266FSB DDR board for my 850's, with some aggressive NB cooling I can push that to 293Mhz FSB stable in memtest86+ but no more the NB is heat sensitive so CPU is water cooled and NB has a oversized heatsink and fan.

The only other board I have that can handle both Unlocked Athlons, Athlon 4, and Athlon XP is my DFI Lanparty NF2 board.

So yea 200Mhz FSB or 400Mhz Effectiv can only be had at 5x multiplier and 1Ghz so that is outside of the rules.
Best case scenario would be 170Mhz or 340Mhz effective, very fast, more realistic tough would be 154Mhz for 308Mhz effective buss.
But you still need to have a proper board, or you would have to mod your board to manually set the multipliers by implementing the old ways of doing it on Thunderbird/Spitfire.

DDR on the Athlons are faster due to Athlons stock 200Mhz FSB but the performance gains are not proportional, i would say its 10% more performance with DDR VS SDR at the same clock (not effective DDR clock)

With the right board for a Pentium 3 system one can do 166Mhz ram and FSB, maybe even more, I got up there with a tualatin but I have a P3 800 that will do 166Mhz FSB stock voltage. Problem is my board cant do that on ram so have to run 3:4. But I have the CPU and ram for it tough the CPU wont qualify.

There are 6ns SDRAM out there, I seen multiple stick but one has to check what chips are on the sticks. Best I seen is 166Mhz @ Cas2 when I overclocked a 1Ghz Tualatin to 166/166 FSB/RAM at Cas2 and that was fast even compared to Athlons.

So at 163Mhz FSB and RAM with a good stick and board a P3 is not slow.

Both have there challenges if one wants maximum memory performance on the lower clocked Processors.

Hello guys.
I just want to point out that you can do as many submissions you like until the deadline. 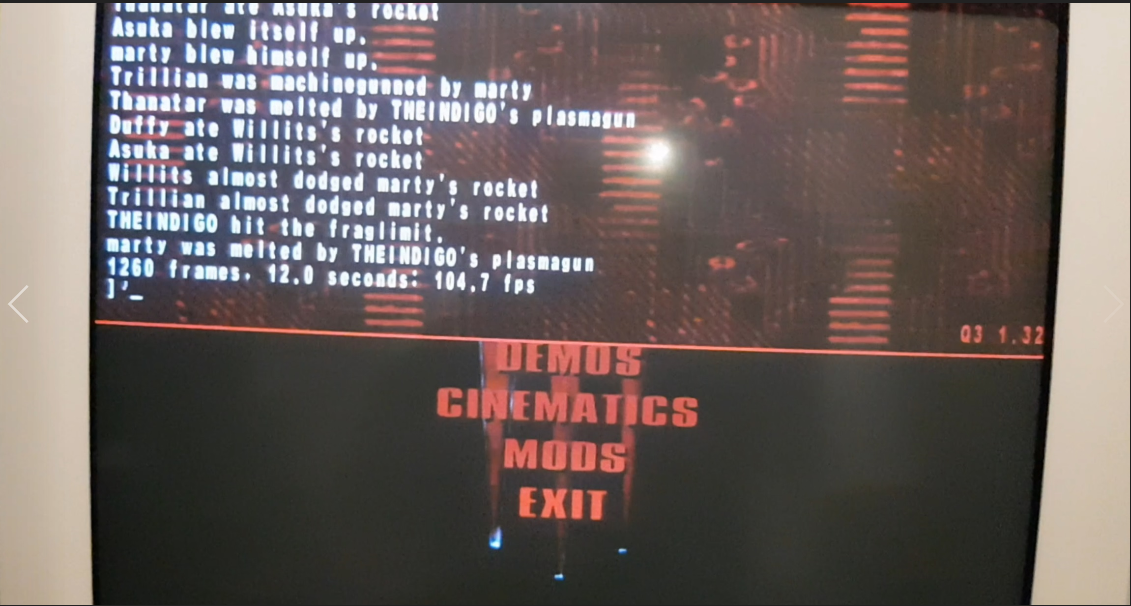 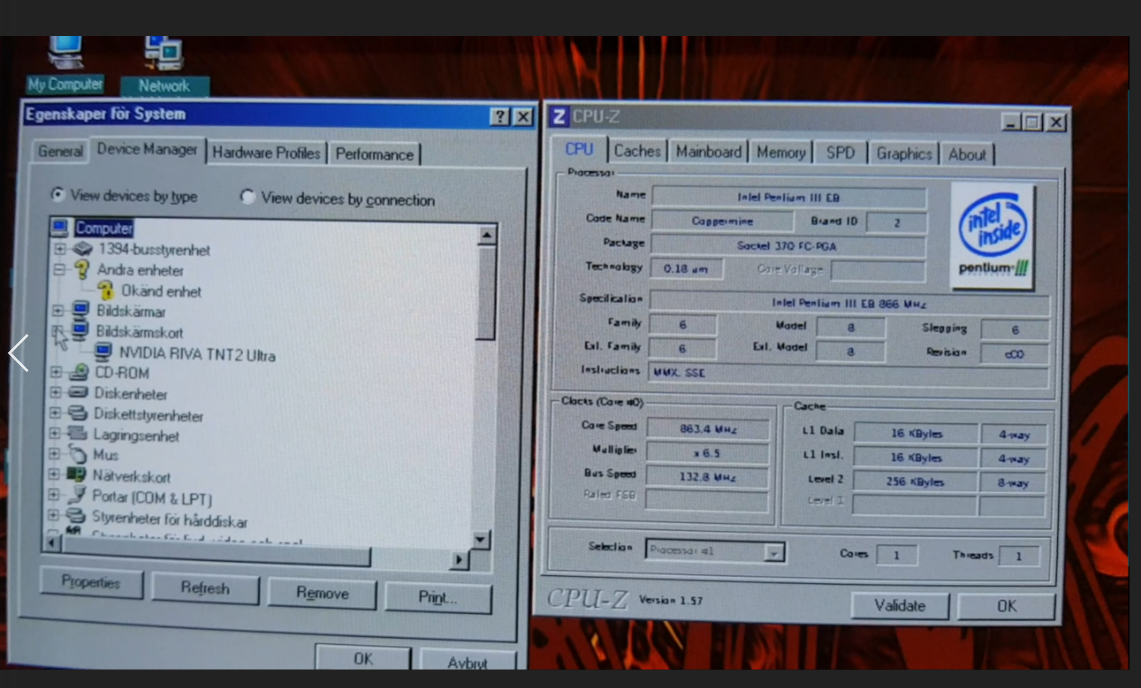 I think it's a super fun idea. I wish there were more of these types of competitions here on the board to be honest. My stance is, we can grumble about the rules, or play the game and see what we can get out of the hardware we have. It ain't really about the prizes, it's about how far you can push things. And it's an opportunity to learn something.

I have tried this version on a couple of computers. I got issues with the soundplayback. It stutters.
Have anyone experienced similar things? If so? Did you solve it? And in that case - how?

What OS?
Which port are you using?
What hardware and sound cards?
Is it stutter or a delay?
Does the regular Q3 have the issue?
Have you tried different sound card drivers, lowering sound acceleration, adjusting the port sound settings and configuration?

I havent really tried anything yet except removing my config files so that the game reverts back to normal settings. It didnt help at all.
I would describe the problem like stuttering and delays.

The OS is windows 98

This might have been discussed earlier (TL;DR), but the Thunderbird was launched in 2000... wasn't this competition supposed to rely on 1999 parts? (although, it clearly doesn't or it does so selectively 😁 ).
If Thunderbird is disregarded (as I believe it should), then DDR motherboards are also out of the equation. 😀

Just ordered cheap TBird 900 locally. Will try pencil-mod to unlock it for 8.5 multi (850MHz).
Board is ECS K7S6A+ (Sis 745), about equivalent to VIA KT266 performance wise. I used it before for AMD Geode project.
GPU is Asus V6800 Deluxe. And 'Wayback machine' spitted out TBird DLLs. We'll soon see what comes out of it. 😉.