I know that some have used the rom socket on 3Com 3c905b ethernet adapters to add XTIDE capability to a PC.

I was wondering if it could also be used to enable a PC to boot into DOS (or other OS) from ROM? How much storage can such a ROM have?
Even better would be a boot menu, letting you select from several OSes, or disk boot.

Is this even possible? I'd love to do it to my Toshiba T5200 laptop; have it boot into Desqview/X from rom, or if I hold a key, boot from disk.

Sure its possible. There are ROMable DOS variants which would run if booting from floppy failed - I guess the same way the original IBM PC would drop you to a BASIC environment if there was no bootable disk in the drive. But these ROMable DOSes are probably not what you're after - they'll all probably be from the 80s. You won't be able to do this with DOS 6.22.

NIC Boot ROMs usually work by emulating a floppy drive. They'll search the network for a server, look for a suitable disk image on the server and if one is found map that to drive A. Then DOS boots as normal from the virtual A drive. From here normally you'd start the network stack which results in the Virtual A drive disappearing (because the network stack takes control of the NIC from the Boot ROM), login to the network, map network drives and run anything else you want (eg, Windows 3.1) from the server.

If you wanted to run DOS 6.22 you'd probably have to take a similar approach to what a proper NIC Boot ROM does - emulate a floppy drive and mount a disk image. Problem here is option ROMs are limited in size to something like 128K. Not much space to store a disk image!

So if you want to use the NIC Boot ROM socket to boot other OSes from some place other than a local physical disk, probably the easiest option is to install a compatible Network Boot ROM in that socket. Depending on the Boot ROM you may even be able to have it present a list of disk images to boot from: 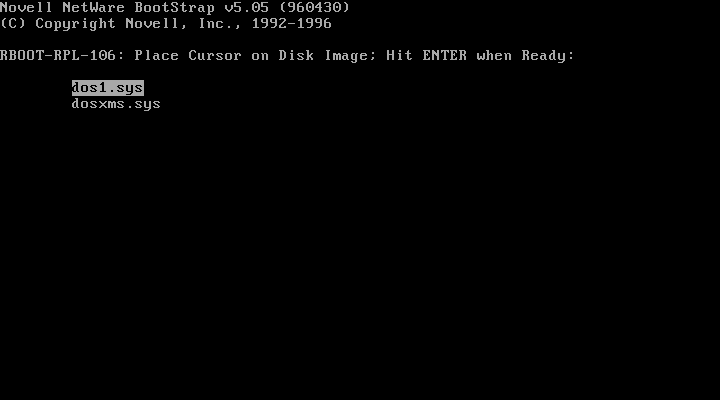