No car amplifier worth the price, especially since in a car, you need to deal with crappy room acoustic first,not to mention such asymmetrical listening position that ruins stereo imaging, and small speakers that tend to compress whenever you play them loud. So amplifier is usually the thing to worry the last when building car audio. 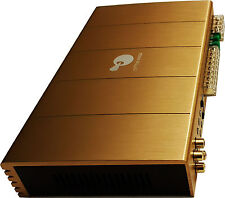 PS: I did my homework, and Critical Mass Audio is white van, so stay away from the brand.

What Country are you from? Shipping is only $15 at my destination.

If the truth hurts, tough shit.

And it has 6 bids already.. ummmmm

And it has 6 bids already.. ummmmm

In fairness, the starting bid was a reasonable $100. Reasonable for that card, anyways.

I guess that a few people really want that card. Even though it doesn't have a wavetable header, and Keropi clones them.

Don't know if he really wanted this thing that much and got scared that someone might snatch it, or it is some kind of a weird auction tricks.

IDK What the fuck is happening with prices in this hobby. I can't find the catalyst (If one exists) unless the catalyst is the smart phone era like some have suggested.

Either way this hobbys bubble will burst when the generation of 80s computer engineers starts to die off/become to old to work on PCs. There is basically no influx in numbers from the younger generations. At 18 I'm probably the youngest one here. I'm expecting the 3DFX bubble will burst in the next couple of years and early NVIDIA hardware will spike up in its place.

For a bubble to burst, implies that these items will lose value. I just don't see that happening with this hobby. Up until the mid/late 90's muscle cars were still plentiful and cheap. Even after a couple decades, the prices are still climbing into the stratosphere with no end in sight. If a bubble ever does burst in that market, it will mean that prices are saturated. It won't mean that the cars will lose value. I'm willing to bet that the retro computer/gaming hobby will be the same. It will continue to climb for decades then taper off at ridiculous prices and stay there.

Wow 2 reasonable, thoughtful comments in a row - a new record for this thread 🤣

IDK What the fuck is happening with prices in this hobby. I can't find the catalyst (If one exists) unless the catalyst is the smart phone era like some have suggested.

The catalyst is that all us O.G. guys who grew up on DOS gaming and did the LAN party circuits back when Quake was the hot new thing are all 35-40 now, have money & houses with space, and want all the high-end crap we couldn't afford when we were broke-ass teenagers. The prices went up because very few of us had the really good stuff to begin with. 😜

(I think the final iteration of my competitive LAN party rig was a Duron 850 with an early Radeon. 1.4GHz P3 with a Voodoo5? NOBODY I knew personally had a setup like that!)

I don't really understand the prices of the MPU-401 stuff though, that seems a little insane. They're not really useful if you're trying to run a studio full of vintage MIDI gear (which I do!) so people must just want them for games, but SoftMPU can completely cover that use-case. To each their own I guess.

To be honest I NEVER thought individual components would be worth much. I figured high-end systems or 'historic' machines (C64, Apple II, IBM PS/2, etc.) would go up but I didn't expect things like dirt-common jobber motherboards or Radeon & Geforce cards to get back any value. Live and learn.

I don't see the bubble "bursting" because the people who've already paid modern prices for this stuff aren't gonna fire-sale it away when the trend dies down, but it will definitely slow when we all get bored of 'retro' again.

Wow 2 reasonable, thoughtful comments in a row - a new record for this thread 🤣

Was that what we were going for here? I thought we were having fun.

No complaining, no debating, just people selling things for strange prices so we can laugh at them.

It is a humor thread after all...

The other important point to note is that supply of these parts is now severely constrained. These components, once plentiful and sometimes inexpensive, have gone through approximately 2 decades of attrition, by means of failure or disposal. The remaining parts are more and more likely to be in the hands of people who know both what they are, and what their "value" is. Not everything will remain functional, and most will never see another release. Although several clones are being produced by the community, which really is astonishing. ARGUS, Keropi's MPU-401AT replacement, SIMMCONN Revival, and the Dreamblaster are all marvelous projects, which show just how committed this community is.

I was pretty young during the DOS phase, being a VERY late 80's baby. Consequently, I did not know what was good and bad. Setting up Duke3D was a frustrating affair because 5 year old me did not know what kind of sound cards existed, let alone what IRQ and DMA were. The list of options for sound cards was not something that I could use to determine which one was better than the other, and all I knew was "Sound Blaster or Compatible".

I never left the world of computing, but my interests changed with time. Finally, a friend of mine gave me an old school PC (it literally was an old Pentium MMX from a school!), I used an AWE64 Gold and Rage II+DVD that I had found at work, installed them, and used it to play some games. 20 year old me was able to look through the list and wonder what the options were, then Google them to find out. That allowed me to use my modern knowledge of hardware and software to learn about the past options, which then, as most here will understand, fostered the urge to have the best. I suspect that, as others have pointed out, people who used to have middle of the road systems are revisiting things and want the best experience possible. This has created a larger demand than would be expected.

I expect that the MPU-401 craze is due to an aversion to emulation, which most here have, coupled with the collection instinct and prestige which come with owning rare hardware. This also eliminates one of the (many) big drawbacks of Sound Blaster cards.

I agree that prices will likely remain high, although some speculation is certainly occurring. Supply and demand are working actively here. Demand is certainly going up by the number of introductions here and on Facebook. Supply is most assuredly going down as well-to-do collectors sink their teeth into the remaining stock.

How about this one then. An Advanced Gravis Ultrasound PnP for just under $400 ? 😀
http://www.ebay.com/itm/RARE-Advanced-Gravis- … QUAAOSww5JZhP0V

But on a more serious note, I'll have to agree with the majority of the folks here that appreciate this old hardware for what it is, if not just for the fond memories it brings. Especially if it really is the exact same hardware you have owned for 20-30 years and you've carefully stored/handled it in such a way that today it still works.

For instance, I can't wait for that intelligent MPU-401 that Keropi is doing to land in my lap. That's a brilliant piece of retro-engineering right there, well worth the price, and it will be the perfect companion for both my Roland MT-32 and Yamaha DB50XG daughter card. I didn't have either back in the day but I'm very happy to own them now despite the price these items came at. I've always happily used an original SoundBlaster 16 at the time it came out, which came at around $600 back then. I still have that very same card in addition to several other models I have collected since.

I was even able to pick up the GUS I mentioned at the beginning but that was many years ago and for a fraction of the price they are going for now.

Still looking for the Roland CM-32L though... 😀

At least they still have the original packaging, that's a feat in its own right. 😉

I guess the price is justified when you used to own one and want to simply re-create that original feeling that no emulator can, regardless of how good it gets.
There's also just something that goes with the 'origin' of things... entirely subjective but still...