Whats the most rare piece of hardware you own?

As promised, pictures of the NEC Multisync XP17 and the box.

Omni Labs AudioMaster (picture) - rare soundcard based on ASC Media Master technology, which allowed loading samples into card's RAM. Just like GUS, but aired before GUS. I believe I have the only species known to the community.

IBM Dock II for old Thinkpads, maybe - I guess there aren't so many of these models available around... I've been lucky to find this particular huge model, with integrated additional ISA, SCSI and speakers: should be referred as rare?

I got it last years after nearly 15 years of on and off looking.

I feel this kind of thread should be more relevant to conversations about valuation and scarcity, I'm just not sure if I'm qualified to be the one to resurrect it after 5 years 😉

I don't have much but I would consider these the rarest of what I own:

I have a TEMPEST VAXstation 3100. I don't know if its truly rare (after all, I just bought this one on ebay for not very much several years back) but a VAXstation wasn't exactly something you could just buy from your local computer store and a version thats specially shielded against spying through leaked radio emissions would have had a fairly fixed market. The sticker on my one indicates it came from the Ford Aerospace Western Development Labs and came to me without a hard disk (it was probably network booted).

A quick google reveals no pictures of one of these things anywhere on the internet so here is the front and back:

Its basically a big steel box with a pristine completely normal VAXstation 3100 inside. If you lift and rotate the silver thing on the front the flap opens and folds down to reveal the floppy drive: 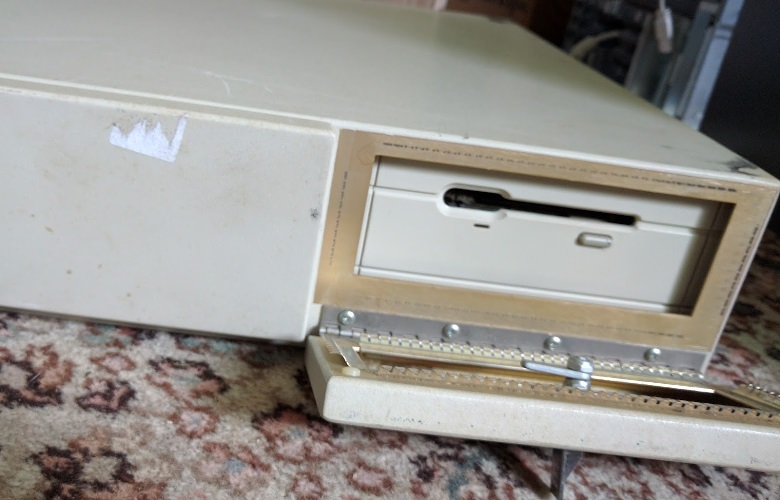 It is supposed to be used only with TEMPTEST-certified accessories (of which I have none). These all have shielded cables and the widgets I presume are themselves shielded (CRT display with a big metal box case probably). The keyboard and mouse ports just appear to be shielded versions of the regular versions and the display is just regular BNC (monochrome). The serial ports are something a little weird that I've not seen on anything else, network is optical and SCSI is a connector (big round thing on the left) is a bit of a mystery to me too.

Because its just a regular old VAXstation on the inside all the weird shielded ports ultimately just plug into the standard (for a VAXstation) ports on the enclosed machine. Some have extra circuitry for filtering, handling the optical network, etc. 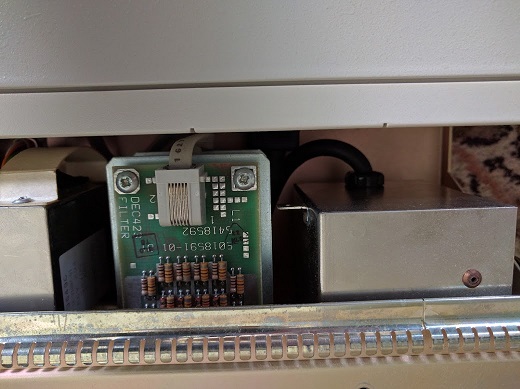 Other manufacturers made similar TEMPEST machines. The computer history museum has a TEMPEST SPARCstation for example.

I'm not sure how rare this stuff is since there's probably some people on vogons who have a whole pallet load of every item I'm going to list ,
but here goes:

Tough question... probably a well-preserved game cartridge for the philips videopac (or magnavox odyssey, depending on market). Can't be many of those games left out there...

Rare is a weird concept, I know it seems straightforward, stuff that there is not a lot of, but demand and motivation to sell vary. Thus it is hard to tell whether something is rare just because of high prices and eBay listings. I guess we could say "functionally rare" in that way more people want them then there are units available for sale, and "truly rare" meaning there's only a handful whether people want them or not. For instance, I don't think Voodoo 3s are actually truly rare, just very sought after. Then the Voodoo 5 might be by percentages the most highly preserved vintage card, the highest percentage of production still extant and appreciated. Whereas Riva128s might have a very low preservation percentage, but there's still plenty around because the production numbers were a couple of orders of magnitude higher than Voodoo 5.

Now between the two, there are cards I have like like Number Nine Revolution IV, which was Number Nine's "voodoo 5" as it were, because it was the last card with their own chipset before they were bought out. There's only one on eBay that I'm seeing right now. However they are nowhere near as popular as the V5 either "in the day" or now. It's hard to guess, are they actually rarer now than Voodoo 5s maybe???

Then there's random crap that few people have a use for other than as a curiosity, like the C-Cube ISA MPEG decoder card I've got, how many still around a couple of thousand? Less? Maybe also there's obscure interface cards and short run adapters that have ceased to be technologically relevant within a year or two of being made, do I have a couple of oddities in my stash where if the sort of Star Trek scan from space detection were available, you'd only find 20 still existing, do you possibly have similar?

Language separates us still on the interwebs, U5S 486 class CPUs were banned from the US, and I think parts of Europe, so remain very very uncommon there, but few of us speak Chinese, or look at Latin American markets, are they common as dirt there still?

I don't know if this is rare or not, but they do sell for stupid sums of money. I have a Roland scc-1, it even works! =)

I guess it's rarer than most of "rare" stuff posted here 😉

I'd be good indeed to give a base line for what's considered rare.

For example I have an Elsa Erazor X2, which is a Geforce 256DDR. The Geforce 256 is not that uncommon, but the specific model I have is.

I also have some telephone exchange equipment, 8 and 16bit ISA cards, like one to interface with an Ericsson MD110 system, so not home computer stuff and even less useful as a 56k modem card, but I guess not common.

I dont know what the first thing is, but Happy to see the voodoo 3 listed. I have my original voodoo 3 pci as well, but i wish i kept the box. My mom was a box trashing beast

Cyrix PCI to ISA evaluation board.

I think my Playstation 2 official Keyboard+Mouse are reasonably uncommon, but not on the Teradrive's level.

Not sure I would know from Adam if anything I have is truely rare or not, but based on a few comments I suppose my boxed Compaq QVision 1280/E EISA card might come close.

Repair of 3dfx Devices and Soundcards with passion...
Here you can find more

I’ll list my stuff later, but I’m surprised no one posted “I have a new GPU, and I only paid retail.” (I do understand this thread was created pre-retail GPU shortage.)

Hah . I have a 3060Ti that a family member was able to purchase through the EVGA program and I bought it from him for the inflated "retail" price.