I bought a 386 board in June 2018 for some fairly slow DOS gaming. But when I set it up it was glacier-slow. Citroen 2CV Slow. As recently as 4th July I posted how it couldn't run Wolf3D with a screen size greater than a postage stamp!

Today for no particular reason, I put a jumper cap on the Turbo jumper, and to my amazement my Topbench jumped from 49 to 75 points. Suddenly Wolfenstein 3D is playable, Blake Stone is playable, booting is quicker, world hunger is solved and my cat likes me again. I've always thought that activating turbo, as in closing the circuit by pressing the turbo button (or putting a cap on the jumper) would activate turbo and slow the PC down, but nope! I feel quite embarrassed that for the last two years this board has been a bit too slow to be much use but now it has a new lease of life. I even ran Sim City 2000 briefly before it caused a hard reset.

Can anyone beat that for a dumb retro mistake they've made?

I had a homemade water cooling setup back in the day on a Socket A setup... Didn't have the return hose attached securely to th 5 gallon bucket and left the system running overnight. The hose came out of the bucket and dumped the water all over the floor and the hours-long frying of the CPU did not smell very good.

Pretty sure I've said this in other similar threads, In 1993, I tried to save $20 by rewiring an AT keyboard. I must have done it incorrectly because when I plugged it and powered the 486 on - it killed the motherboard. There was a visibly burnt resistor near the keyboard port. I attempted to replace the resistor, but that motherboard never showed any sign of life after that. As a high school junior with a minimum wage job, I had to replace the motherboard. Thankfully everything else survived. Good learning experience tho.

Flashed the wrong BIOS onto my IBM A31p notebook.

Since the BIOS is married to a TPM module which is very undocumented and I didn't do a backup beforehand, I pretty much turned the machine into a paperweight. Whoops!

At least I got a new board from an otherwise very broken machine. Still...could've saved the money for that...

I am not sure if this would count has retro, but it was an old hard drive in one of my older computers, back in the late 1990s around 1998, I had a 4GB hard drive I used for backup, unfortunately the power connector plastic was broken on this hard drive and you could, if not paying attention, plug the power connector in the wrong way, and one day that's what I did, and it was the first time I had ever seen fire shoot out of a chip on a circuit board, I did however save the hard drive, it had a lot of my files on it, years later, around the mid 2000s, I happen to find another hard drive exactly like my old one on eBay , so I bought it, and I removed the circuit board from the hard drive I got on eBay and placed it on my old hard drive and it worked, I was able to recover most of my files.

Just recently I was cleaning up and trying to fix a "Diamond Stealth 3D 2000 Pro" this was damaged being in a covered scrap pile, I had already replaced the rusted VGA connector and cleaned the board and removed most of the corrosion, but then I noticed one of the hair fine pins on the larger S3 ViRGE chip was bent, so I used the razor fine tip of an X-ACTO knife to try and straiten this pin, then I noticed it was not making contact at the top of the chip, so I try and solder this hair fine pin, in a last ditch effort, and the pin just came right off.

Threw away half of my retro PC collections when moving house.

Slow down your CPU with CPUSPD for DOS retro gaming.

My biggest mistake was throwing away my first computer. It was a Pentium 2 from 1999 with some Voodoo graphics card. I never even opened the case, I was a complete noob. I usually don't throw anything, I still have my Watara Supervision which is even older and doesn't work.

Recycling my old computers. I just end up buying more.

I sympathize, I truly do . I have only one room in that situation, but the installed retro stuff (along with the modern stuff) is taking up a significant part of the living room . My wife must really love me to tolerate it all . And I love her for it .

I've done that recently too with a SATA drive. The little nub that orientates the connector had snapped and I had jammed it on the wrong way. The cable and the DVD drive literally caught fire! 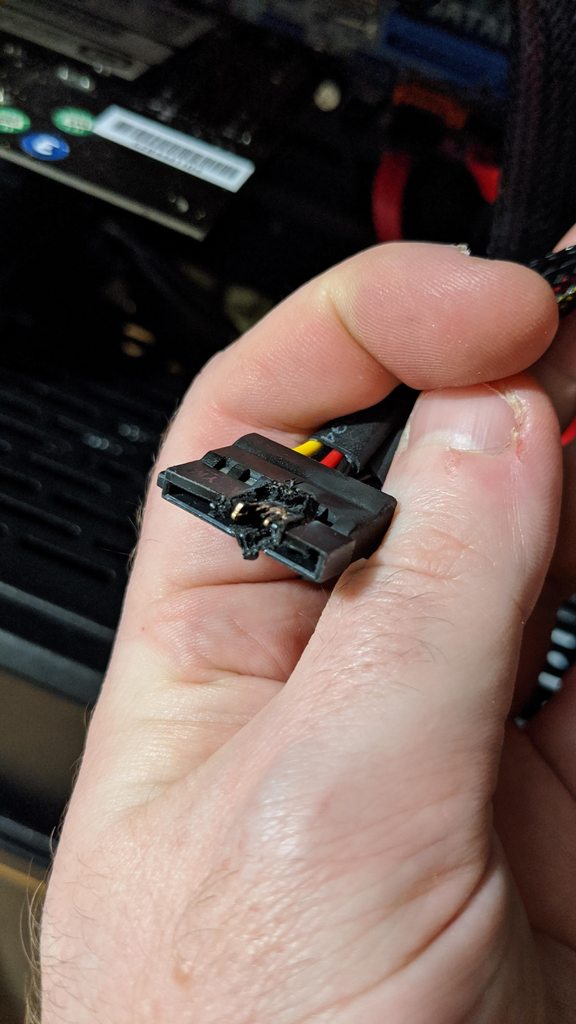 My wife must really love me to tolerate it all . And I love her for it .

You can't really enjoy your hobby if your spouse hates it, right? My wife is also very supportive, she even helps me pick up items.
Still I'd hate to sell anything but I'm running out of space fast.

A lot of it is hindsight; for some reason keeping all the cards from my old P166 PC except for the sound card, of which I ended up buying a new one as it's a perfect retro card (azt2030). Throwing out my Socket 370 coolers, so I had to buy a new one. Of course I also threw out various systems over the years but those took up a lot of space, these items didn't.

And I guess getting sucked into spending money on upgrading old systems even though they were fine for their intended purpose in stock form, you don't need a P3 1.4 for DOS games... But it's so much fun to figure it all out and get it to work.

About two years ago, when I was just getting back into retro gaming, I ended up installing Windows 98SE on a 500 GB hard disk. At first, everything seemed to be working fine, but then I started randomly getting blue screens and file corruption when doing something simple like installing a game from a CD.

I tried a bunch of things including multiple clean installs, pulling out all cards except graphics, using a different hard drive (320 GB this time) and swapping out various motherboard drivers. Nothing helped of course, until I bought another hard drive which happened to be smaller (80 GB). Suddenly, everything started running fine again. I simply figured that my other two disks were broken and threw them away.

I didn't think about this again until much later when I accidentally stumbled across this video by Phil where he covers the issue of Windows 98 and hard disks larger than 127 GB. The worst part is, as someone who used to service computers a long time ago, I used to know about this, but I had simply forgotten over the years.

Back in the 90's I had a copy of Stadium Events for NES and the running pad.. my cousin won it at at Nintendo tournament in Orlando and later gave it to me. I ended up selling it, along with all my other NES gear to a local flea market buyer for next to nothing in order to buy a N64 when it came out. Yea, that was pretty dumb looking back now, however back then it really wasn't worth anything.

This definitely wasn't a "retro mistake" at the time. I ran a heavily overclocked A64 3200+ (at 2.75GHz) and X800XT PE off of a 300w Bestec PSU that I pulled from an eMachines PC in an effort to save some money. One hour into a game of Far Cry, the PSU actually went BOOM, filled the room with smoke, and killed the motherboard. Fortunately, my pricey new 64-bit CPU and GPU somehow survived the ordeal.