Rules:
Please keep game discussion out of this thread. Open a new thread if discussion is not directly related to the subject.
Posts in this thread will be deleted for cleanup.

When posting try to use the following format:

Beneath A Steel Sky
Broken Sword 2.5: The Return of the Templars
Dráscula: The Vampire Strikes Back
DreamWeb
Flight of the Amazon Queen
The Griffon Legend
Lure of the Temptress
Hi-Res Adventure #1: Mystery House
Sfinx
Sołtys

Is there a way to query a list of new free Microsoft store games?
I've used Windows 10 since the beginning but I can count on on hand the number of times I've opened the app and the only thing I've ever installed from it is WSL and I don't open it if I don't have to and I'm not going to be checking it for this thread. 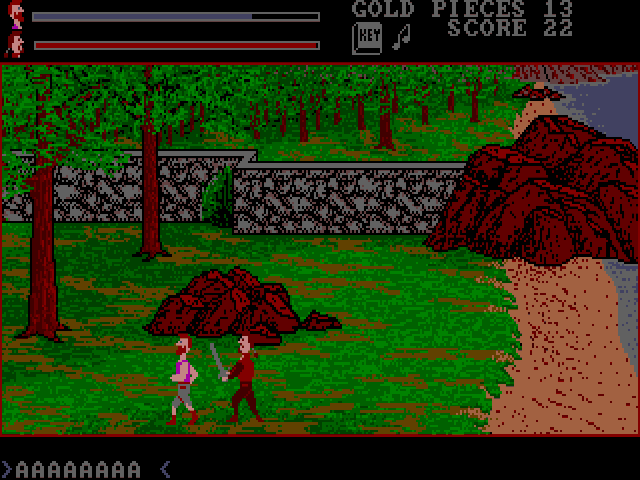 All titles, from DOS to Windows, available in english and german, early Windows titles also work on Windows 10. (however, you will get much better performance on Windows 95 via DOSBox on Clonk 4 and Planet)
DOS titles obviously require DOSBox to work.

Single- and Multiplayer (local / internet) possible, depending on the game.
All games come with Tutorial levels to introduce controls and game mechanics, so even if you've never played Clonk before the Tutorial levels will keep you covered. 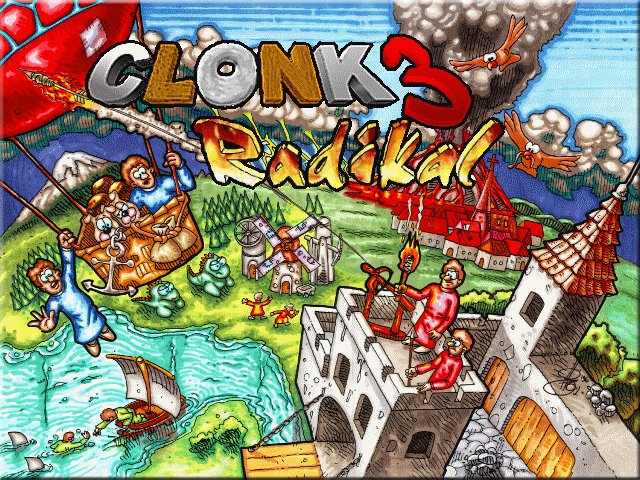 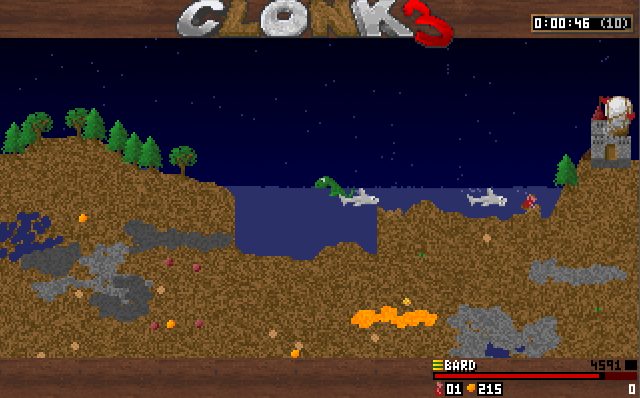 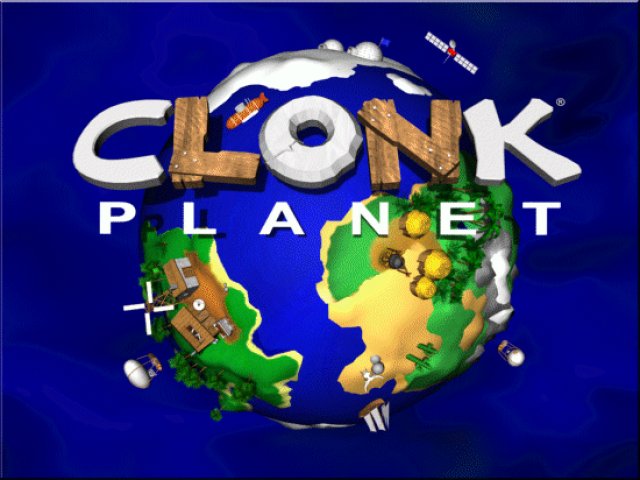 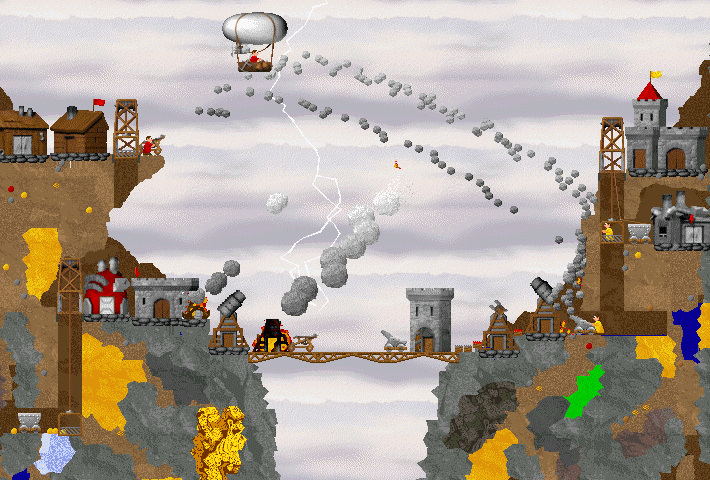 Optional:
https://ccan.de/ (change website language with the flag at the top right)
Thousands of community created mods for various versions of Clonk. 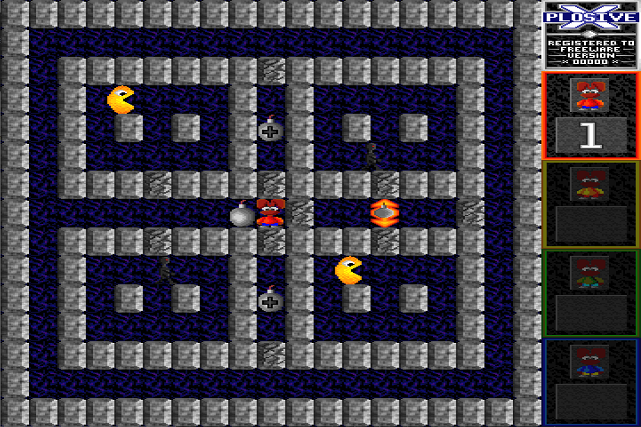 On the title screen press Enter to change player numbers and other options.
Hold Escape to exit out. 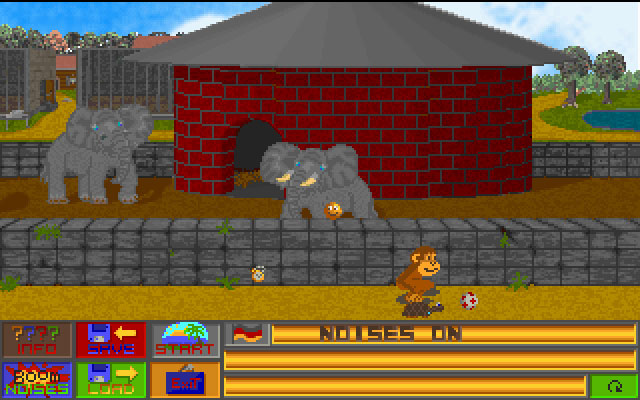 https://www.thepixel.net/runawayvoll.zip
(english and german, language setting ingame via flags, english version is "not the yellow from the egg" but understandable) 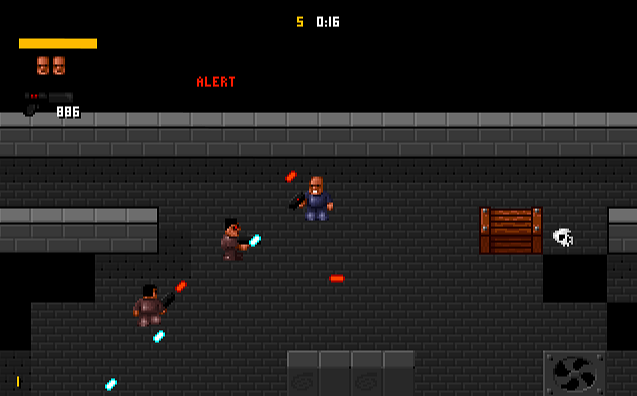 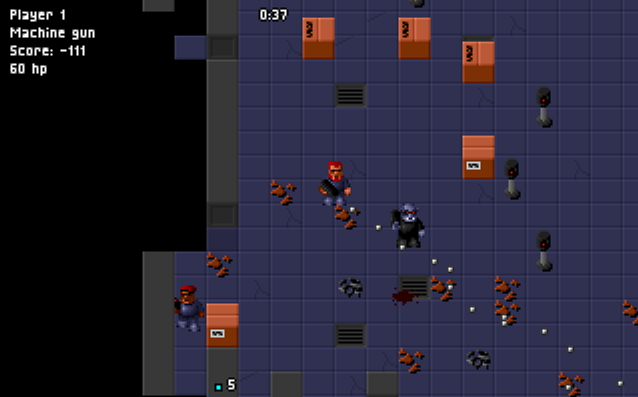 (if you die right at the start, enter the options menu and set Player Health to 100%) 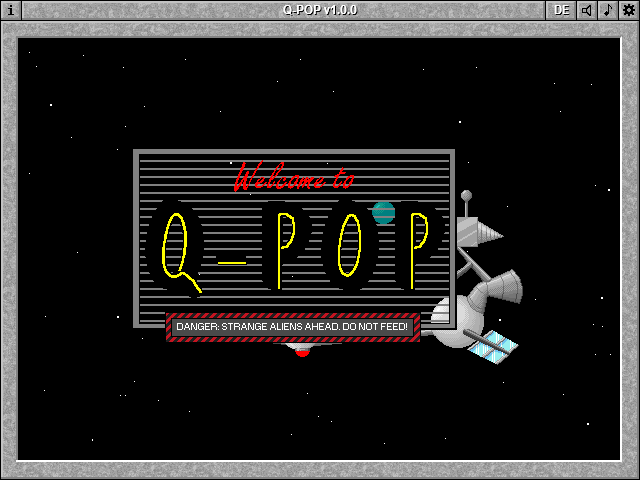 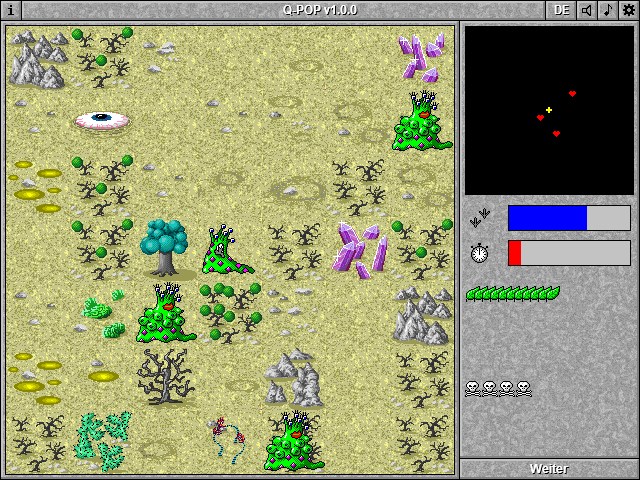 Q-POP is a rather obscure Spore-like game and only known in Germany, the English version isn't fully translated as it never got to be released.
You can control 1 of 6 alien species, a hotseat function for multiplayer is also available.
The game is divided in 3 main sections:
In the overworld you place down your creatures and occupy land as well as attack the other species.
In the "Eat or be Eaten" level you will have to walk around, eat plants and mate to produce offspring.
In the "Beasts and Mutations" status screen you can increase your skills according to how many evolution points you've gained.

It can only be played under Windows 3.1 if you choose the downloadable version at FRUNIT.
If you want more than 256 colors in Windows 3.1 to enjoy the full colour-scheme of the game, download and install this: ftp://ftp.cstula.ru/oldftp/DRV&BIOS/Video/s3/ … 64/w3117004.zip
Unzip the 3 archives, then either open the German or French archive and unzip them into the same folder and start the install. After it has finished, you can change the colour mode under "Windows-Setup": 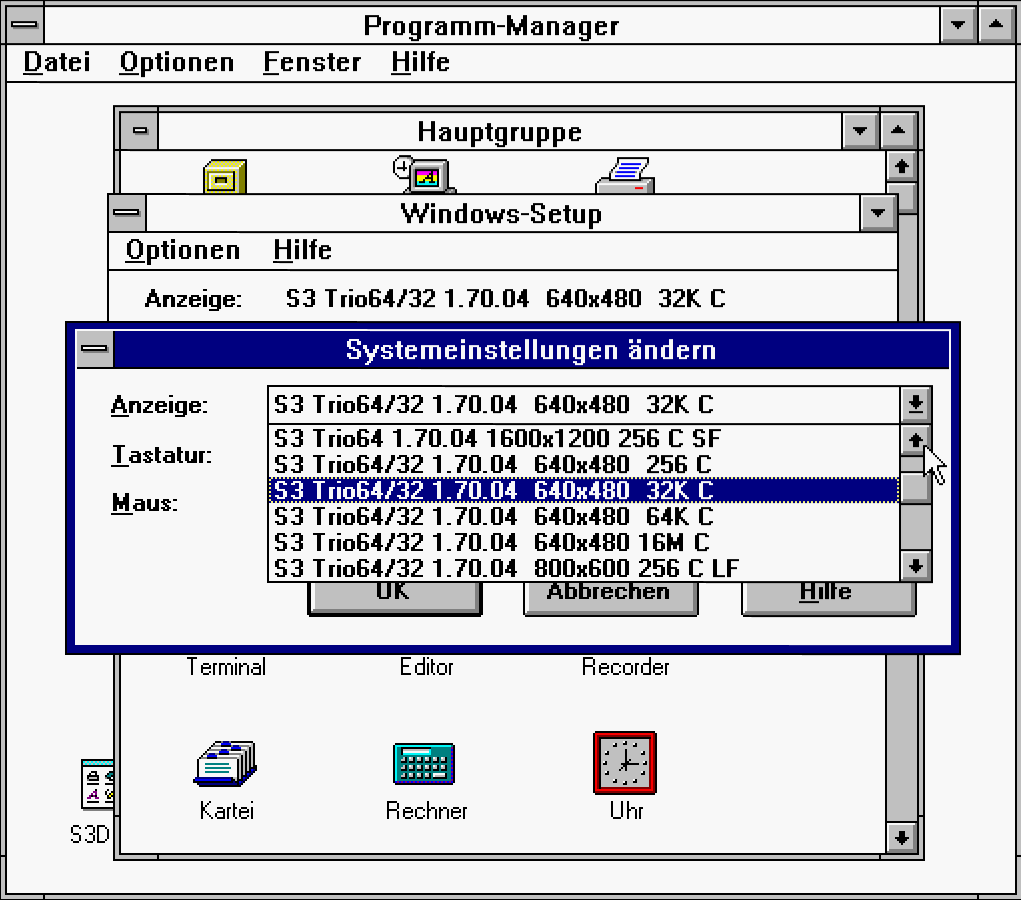 A modernized Browser-Version can be played here:
https://frunit.itch.io/q-pop

Click the "DE"-button at the top right to change to a fully translated English version of the game.

Unfortunately, the CD Music cannot be used in the Browser version and neither in the downloadable DOS versions.
The Music was only available on the later CD version release. 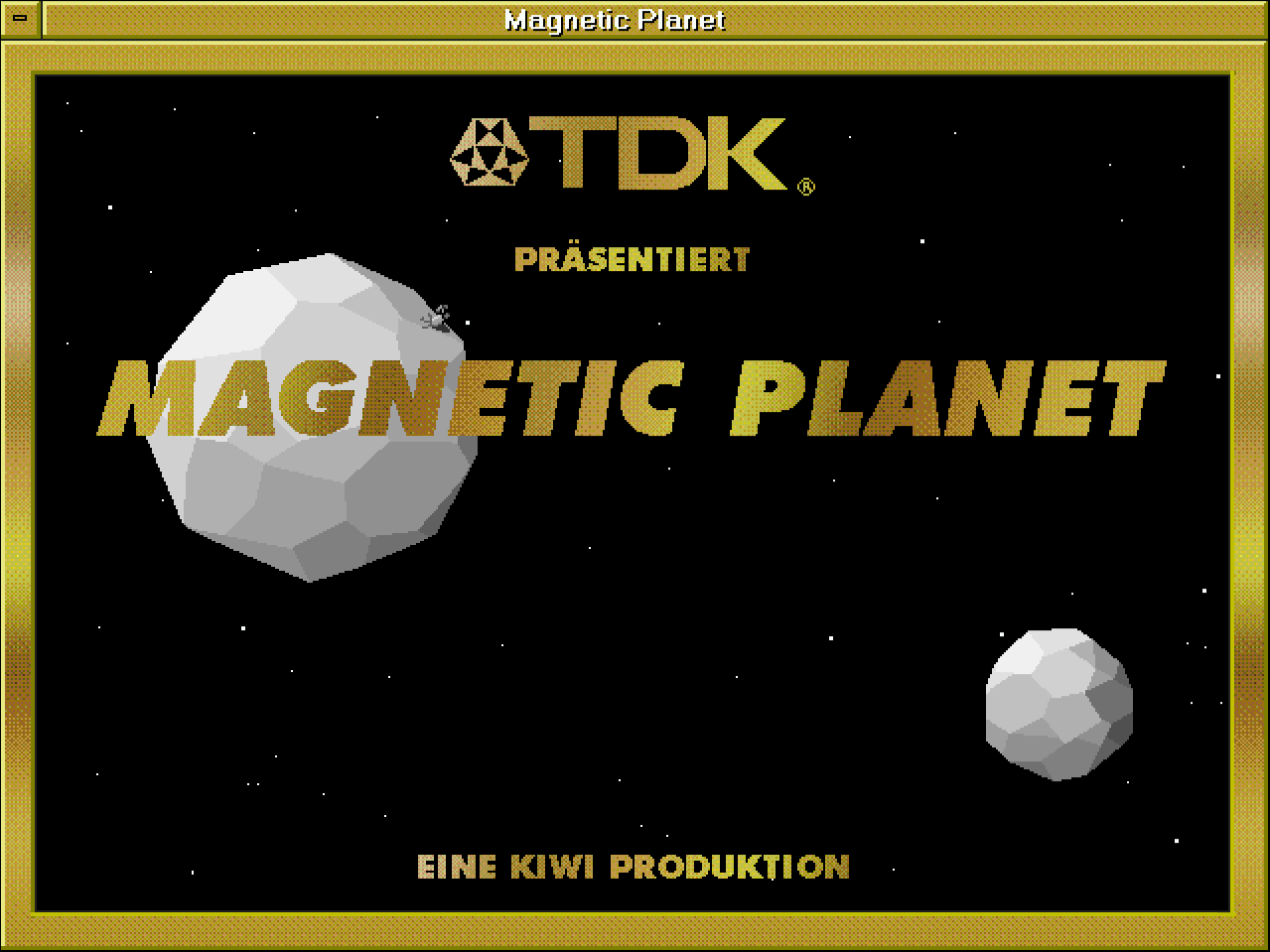 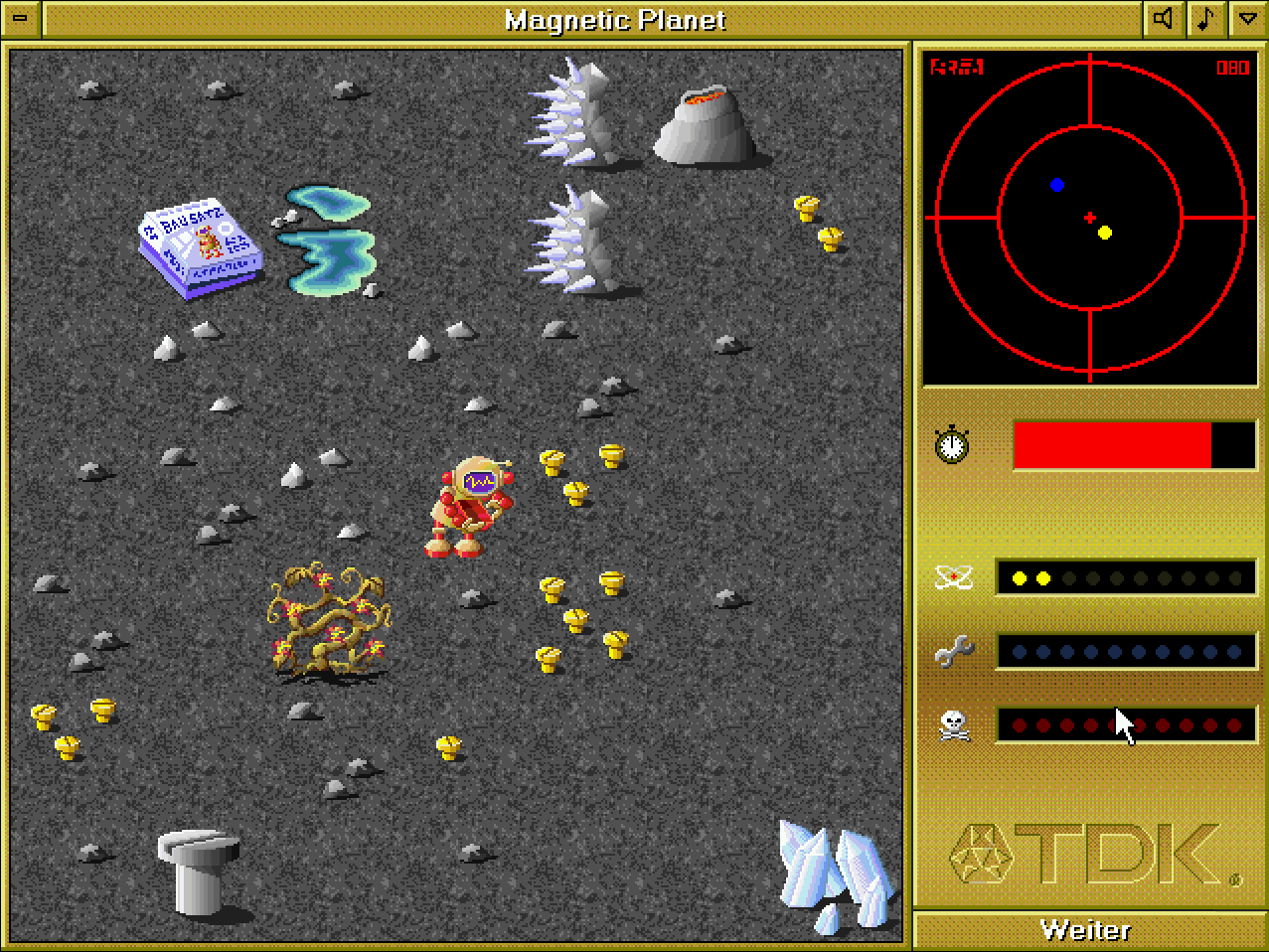 German only.
Basically a re-skin of Q-POP but with robots. All the game mechanics are identical, so even without an english version you should be able to play it no problem if you choose to play it under Windows 3.1.

Choose the "MPLAN32.exe" file to start the game under Windows 10, there you will have additional options such as being able to choose "English" as language.

An excellent fan remake of Panzer General and Allied General designed for Windows XP, but reportedly works on Windows 2000 as well. The developer later went on to work on The commercial game Panzer Corps for Slitherine as a result of this work.

Looks cool even though it's a tech demo game. Found this over at Alpha Beta Gamer. Download towards the bottom of the page.

There's a libre data pack that may be used if you don't have the original game.

Where do you find out what games are free on the MS Store?

See the below from up above:

Some YT channels and FB groups let us know what the free games are. Also I get them from here: https://steamcommunity.com/groups/GrabFreeGames

One must fall 2097 a robot fight simulator for DOS i always loved it even the shareware version was fun.
A legit retired to freeware game now.
I think there was a later sequel coming but don't know much about it
https://www.dosgamesarchive.com/download/one-must-fall-2097/