I have always missed a good game manager for my old computers. Formatting and reinstalling my favorite games is a lot of work, in ms-dos games I have to configure the correct sound card for each of them, create icons on the desktop and then (for my taste) look for icons for games that do not have it.

So I decided to create a frontend / manager, similar to the Launchbox bigbox, but mine will be 100% free, and dedicated only to old games. 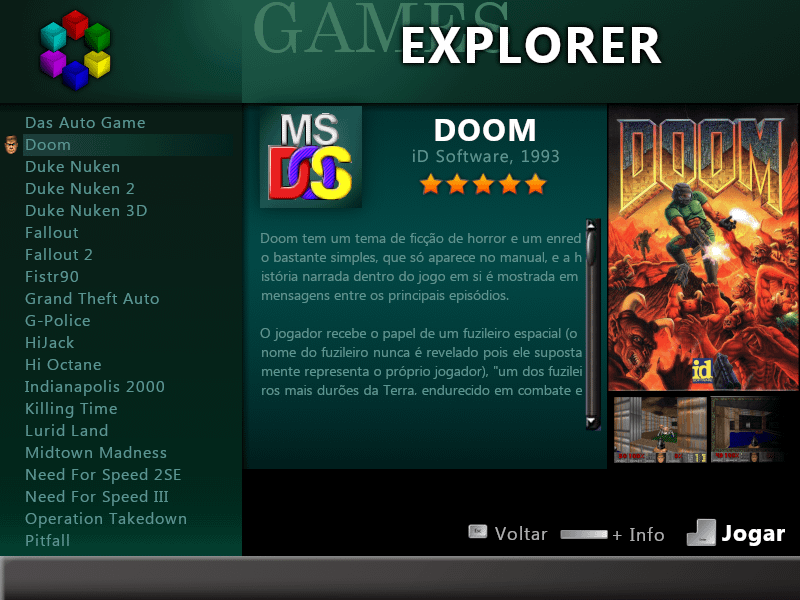 Features that will be present:

- You install or place your games in a certain folder, and it will scan, and your games will appear on the frontend with your name, release date, description, rating, cover photo, and screenshots.

- It can work in a similar way to recalbox or retropie: If your computer has a network card, you can transfer games via the network, and also manage database information via the network

- A user profile system (similar to the xbox gamertag), it will manage the saved games of all games, and there will be a "gamescore" that will be points for every minute you spent playing.
Your savegame can be transferred to a floppy disk or USB stick.

- A game packaging system, to facilitate the transfer between systems. What does that mean? It means that if you want to copy the game "doom" to your other retro machine, the frontend will be in charge of compressing the game in a single file, adding all the necessary information to the database (cover photo, screenshots), in case the database on the other computer does not have information about the game.

- Built-in VCD and DVD Player, in addition to a music player with support for many formats, including mod, xm, it (keygen music)

- Multi-languages, all interface texts are strings, which will be loaded from a simple txt file. Some languages will be available at launch, but if your preferred language is not available, you can easily translate by editing the file in Notepad.

- Customizable! All graphics are customizable, just create a folder with the name of your theme, place the files of the default theme, and edit them. Then, in the frontend, go to themes, and choose your custom theme folder

- I tried to add some support for internet browsing, but it’s really very difficult to do, maybe in a next edition, which uses windows xp as a base, dedicated to also managing games from the 2000s

I would like to know what you guys think about this, I am open to suggestions

I love it! Keep us updated!

I'm in 2 minds about this.
It looks very nice and all but for a lot of us Windows is part of the nostalgia trip. It's why we keep building 9x PCs even though the game works in later OS's, dosbox, etc.

but with retro gaming community growing I can imagine a small percentage simply want a quick and easy way to experience retro gaming which this would be prefect for.
Although if that's the case I feel this is a better fit for something like PCEM.

Consoles are standardised both in hardware and file structure making such menus much easier. Obviously not the case for PC
As per your website drivers alone will be a nightmare. If it was me I'd leave installing windows upto the user and have this sit on top and maybe strip out unneeded OS components.
The non standardised game layout doesn't help, different games with different save game methods. You mention you'll run a search against executable files to find games, that's 1 huge database once you take in consideration different patch levels, languages, No-CD fixes and whatever else.

Not trying to put you off, nothing wrong with the idea but its a lot of work for a small percentage of already fairly small interest group. but it is a hobby and if this is how you want to spend your free time then noting wrong with that at all!

you lost me there!

well not really, there is always room for a front end and yours looks good to me

after years of seeing front ends for MAME and other emulators its strange to see one for windows in a way!

just that I like to use the OS itself

Like really someone is asking money for a frontend 😁 😁 😁

Following with interest 😀 Sitting at a desk, I do enjoy the warts-and-all vintage desktop experience. But for a time I had a little Win98 box hooked up to my TV for some couch retro gaming, with a DS4 controller which works great. That's where a frontend like this would shine.

I also have a DOS machine set up solely to play Voodoo1 titles, and on that I'm using Launchbox for DOS. Because it's cool to have a Voodoo console 😁

Interesting! It probably needs support for Gravis gamepads and other joysticks for navigation then

Isn't there already a certain "abandonware" DOS package that will remain nameless that does something similar?

0. For people who like windows and don't NEED a manager, there is simply no reason to be interested in my project! They are old computer users who already know how to do everything on an old computer, and have time to make everything work, there is no need for a frontend.An example that happens to me: I work all week, and on Sunday I want to play some old games. I often need to format an old machine and do everything, which takes a few precious hours of my short Sunday break.

- The program consists of 3 distinct parts, a frontend (just a win9x program, like any other), the windows configuration, and the idea of ​​a console, each of these parts is optional and distinct from the other, it is not a all-inclusive package, it is up to the user to choose what he wants to do...

- I love setting up windows and running everything manually, I find it more fun to do all this than to play! But not everyone shares this idea, especially the millenium generation, I have a younger brother, he likes the old games, but he doesn't like dealing with the old hardware (which is normal in every generation, just like many of us who were born in 80s and 90s, we may not like hardware from the 60s and 70s). I have a sister who is almost the same age as me, but who was never interested in computers (even at that time) but she loves games. However, she doesn't know how to configure them. It does not know a single prompt command.

- Yes, there are countless frontends that ask for money, Launchbox is the main one. (Since the real frontend features are in the bigbox, and the free part is just an organizer)

- Launchbox for dos is just an organizer, and what I want to build is more comprehensive, at the level of a console's operating system. I want covers, screenshots, saved game management, etc...

- Drivers are not a big problem for me, I have worked with computer maintenance all my life, I have created programs similar to driverpacks that automatically detect and install everything on the first boot. (I had a multiboot windows cd (95, 98 and ME, which installed windows in autonomous mode, and on the first boot, it would install drivers, office, browsers, antivirus, etc ...)

For many years, I worked building lanhouses and cybercafes, I had created a saved game management for the profile of registered users, so, when you return to the cybercafé, you could continue your game from where you left off. This made customers loyal, especially here in Brazil, where cable internet at home only became popular between 2006 and 2009.

Please keep posting your opinions, ideas, doubts... They are very useful for me

Not really? It depends on what you want to run in PCem, of course.

- Yes, there are countless frontends that ask for money, Launchbox is the main one. (Since the real frontend features are in the bigbox, and the free part is just an organizer)

I for one was not referring to Launchbox. I guess there's no harm in linking to a Kotaku article?
https://kotaku.com/one-mans-quest-to-collect- … exis-1839432488

Of course, that emphasizes DOS games, but it's unclear if this is supposed to be about DOS games or only Win9x games. It may be worth emphasizing that there are increasingly few games that are still worth playing and will also benefit from running under Win9x instead of under Win10 or whatever is available.

I like Win9x because it will run perfectly all Win9x games, all Win 16 bit games, and pretty much all DOS games (Win98 is practically a gui for starting DOS games for me) I never had compatibility issues

Most win9x games that I play / like, require at least a Pentium 166mhz and some 3d video acceleration, this would result in something close to a Ryzen 5 3600

Well, that's just it: games that require more powerful hardware are probably more likely to run under later versions of Windows, though perhaps requiring some kind of patch or wrapper. Are there any such games that you play that will not run under Windows 10 at all?

I don't usually mix things up, I run old games, on old machines with old operating systems ... Windows 10, nothing will run 16bit, I prefer to play in the original configuration (yes, there are many modified games on GoG that allow you to play on modern systems, with dosbox or other types of modification, but I feel like this is like having only part of the fun