anyone got 8k display? It looks they got pretty cheap and pushing away traditional ones

Maybe for televisions. But i couldn't fathom PC gaming at 8K yet. Give GPUs a few more years and im sure that will change.

4K in the meantime is starting to look more like a good jump if you have the hardware, and want the image clarity.

I can see how someone who actually works on an 8k monitor might benefit from more real-estate for lining up multiple applications and whatnot, but for gamers, it's utterly useless. Unless you plan on gaming on a 72" TV or something.

I doubt it will push away 4K screens any time soon. They've been available nearly 10 years now? And yet Steam Hardware Survey May 2021:

I'm not sure I see the point in 8K for PC monitors. Windows would have to scale everything back up because it would be too small to read. Gaming would not be enjoyable with either minimum settings and/ or minimum framerates.

I have finished Robin Hood Legend of Sherwood on a 4K 55" on a i5-3450 and the speed was just right.
And no guard surprise you from no direction 😀

No, and I don't see myself getting one. I have a 40" monitor and 4K is perfect for this screen size. Below 32" I wouldn't even consider 4K over 1440p and for 24" or smaller 1080p is enough.
With resolutions too high you are just wasting GPU power at a time when GPU power is expensive without much visible difference..

I recently got a new 4k TV, 55 inch. My FullHD tv was from 2008, so I might have been time for something new. It's quite the improvement. I never use it for games tho.

I've been using a 24 inch screen from Dell for my pc for the last 10 years or so. I've been looking at 4k screens from time to time but I've not decided on anything yet. The minimum size for such screens is 27 inch it seems and I'm not sure if I want to allocate so much space on my desk. 8k would probably need an even larger screen, so i don't see myself buying one of those. Plus, my hardware will not be able to keep up (GTX 1070)

I've already got an old 4k tv, though, with Android 6.
Runs DOSBox and some amateur astronomy /radio stuff. .
I've got a wireless keyboard/keypad thing for it, also.

I recently got this: 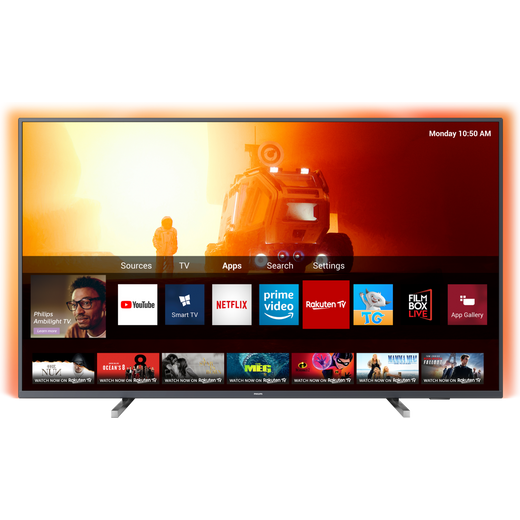 Putting aside that normal viewing distance can mean a lot of things, there are benefits to 8K rendering or display resolution (they are separate things, but you seem to be conflating them so I will too):

1) Less aliasing. Put simply, in worst case scenarios a 4K display resolution is not enough to get rid of all aliasing.

2) Better scaling. A lot of people think scaled content is blurry, even at a distance. A 8K display resolution gives you much more scaling options that will have visible differences at distances individual pixels do not. Integer scaling is a common example (though not nearly the universal solution people claim it is): a 4K display can integer scale 1080p/720p/540p/432p, a 8K display can integer scale 2160p/1440p/1080p/864p/720p/540p/480p/432p. To some people integer scaling is the golden standard of image quality, see for example this topic. As noted in that topic, I do not agree with this, but other scaling algorithms also benefit from higher resolutions.

3) More pixels for effects. Just because you cannot see the individual pixels, doesn't mean you cannot see the effect they make at a distance. CRT shaders are a perfect example of this. They'll look bad at any distance on a low resolution monitor. You can't just increase your viewing distance until the CRT effect looks good, because the image resolution to make it work in the first place was never there. The unofficial (I guess) system requirements for CRT-Royale on this page states that it needs at least a 1440p resolution and 4K is recommended. That's mainly for simulating a (typically smaller) 240p display, imagine what resolution you would need to simulate a common 1080p display? I'm not sure 8K is even enough.

4) Higher rendering resolution gives a sharper and less aliased image. If you think "4K is already sharp enough" go play a game with heavy temporal antialiasing (Deus Ex: Human Revolution for example) and repeat that, if you think "4K is already pretty free of aliasing" play a game with poor anti-aliasing (unmodded Alien Isolation for example) and repeat that. Now, you might say that's fixable with better rendering techniques, which is true, but most game developers just won't do that.

I'm not sure I see the point in 8K for PC monitors. Windows would have to scale everything back up because it would be too small to read.

Windows actually uses ugly bilinear scaling for non-integer factors. 4K is a terrible resolution, since your ideal scaling settings (100%, 200%) makes all UI elements too small, or too big. Most people with regular eyesight and on regular monitor sizes I've seen prefer a 1440p scale. So a high resolution monitor needs to be a multiple of that, which means 2880p ("5K") or 8k. Those are the ideal desktop resolution monitors, high resolution enough to be "retina" (we'll use Apple's bullshit term for now) and a perfect scale factor for legacy applications.

Gaming would not be enjoyable with either minimum settings and/ or minimum framerates.

Having a 8K monitor doesn't really mean you have to play all games at 8K. The higher your source resolution and display resolution is, the better conditions for scaling are. If you think you can't see any advantages of 8K, you sure as hell won't be able to spot any problems with 4K content scaled to 8K. That's for the worst case scenario too, when 8K is going to be really viable, I think Nvidia's push for better upscaling will be in full effect.

So those two drawbacks really aren't as significant as you think. As to the point of 8K, see the start of this post. 8K is just a nice improvement all around. That's not to say I recommend 8K now. TVs are too expensive and have to switch down to 4K to utilize 120hz (which you want for most games), PC monitors are way too expensive and don't even support 120hz at all.

Im current on 1440P 165hz. Have to tweak the render resolution or use dynamic resolution inorder to constantly hit that in more demanding titles, but it's really smooth once you do.

Im waiting for 4K-144 before i switch. Although if you spend most of your time playing single playee games im sure 60 is good enough.

2bit CGA HD graphics would be good for retro gaming