with Serious Sam TFE/TSE in directx mode i got only a black screen... (same problem of old version)

This may sound stupid, but i got mouse issues if the framerate are extremely high.
So maybe try to vsync the game

Works fine here, sure you're using the same settings as 2.54?

with Outlaws i can move mouse only on up-left side

It's been already an issue for Outlaws (and some other games). You couldn't run it with forced resolution or scaling mode other than 'unspecified'.
I added option 'freemouse' in 2.55 for such (undetectable) cases and games that lock the mouse cursor onto the center of the physical screen (Unreal engine games typically).
With that option enabled, Outlaws works fine for me. Unreal engine games too, no more lockup because of that.

edit: ok, it's caused by scaling mode... (i want to emulate CRT scanlines) it was ok in 2.54 version

Available only by manual editing of the config file.

Hi, i suddenly can't run Heretic 2 in 3dfx mode Id tech 2 engine, it looks up in a grey box in the upper corner of my monitor. and it hard freeze
and Elite force 2 Id tech 3 with your napalm driver wouldn't render any textures correctly. They looks like noise and solid colors. also the star ship at the main menu screen wont render

Now i think this is a quake 2 and quake 3 3dfx thing, so it would probably effect several games in that engine.

Is there anything new there? , a bit frustrated when i'm trying to run those games without microscopic HUD

I tried using dgVoodoo to force the resolution in Battlefield 1942 to stop it from constantly changing the resolution back to 800x600 when I return to the main menu. The game works perfectly fine until I want to end the current game session. The game either stops responding or suddenly crashes to desktop with no error message, and I am forced to restart my PC to be able to launch the game again if it crashes to desktop with no error message. This doesn't happen when I stop using dgVoodoo, so I think there is something wrong with dgVoodoo that causes this issue. I am using dgVoodoo 2.55, which is the latest version. I am not sure if this issue is there in previous releases. I am using Windows 10 64bit Fall Creators Update. I would really like to play Battlefield 1942 again, and I hope that this issue is solved. By the way the issue with Splinter Cell (2003) minimizing on startup is now fixed with version 2.55. Thanks a lot for fixing that

You can also select the resolution from in-game menu, so you don't have too guess them
I'v also uploaded the dll with the heretic 2 1.06 vanilla update
I also tried with nglide, but i the image is squashed to something similar to 21:9 and the image stays at the button.
Only software render have i manage to use dgvoodoo with, but that's software render, so no 3d graphic get render in my native desktop resolution

I'v manage to stitch togheter a combination of a opengl->directX and the universalreschanger2, and my modified quake2 dll file
thise files in the link would make Heretic 2 run in 16:9 and the HUD will be intact with the game resolution but the 3D data is up-res to any resolution i want to
Still the 3dfx mode with dgvoodoo makes the game lock up, and i'v tried the debug version but i can't get any log file out of it.

But here is the widescreen pack i uploaded today : https://goo.gl/aprz6R

dgVoodoo is not compatible with 3DfxVGL, as it turned out. See

yeah, your comment and your link to the topic, seems to make it clear for me.
Since id tech 2 uses 3dfxvgl , well those games are the unlucky ones...
But that's not your fault 😀 , i can look for different solution.

The short story is, that i got a bunch of retail games, and i'm trying to make a private archive of the game backup + modern OS patch in the same place.
So i don't need to go and download everything everytime if for some reason i want to install the games or reinstall.

Hi guys, I just wanted to report something. In Aliens vs Predator 2 without DGVoodoo mouse movement is flawlessly smooth. But with it, vertical mouse movement becomes zigzag, shaky. I started to mess with my mouse setting and I discovered that this effect is related to mouse pooling rate. At 125hz it seems everything is fine. At 250hz you start to see something is not right, at 500hz its bad and at 1000 its unplayable. I'm not sure it can be fixed somehow, but just wanted to share it.

Hey! I wanted to thank you Dege for making dgvoodoo2 in the first place; I can run Test Drive 6 and Final Drive Nitro with it perfectly; able to override the in-game resolution and achieve much high graphical quality and framerates.

I wanted to report a graphical error it has with one game. I am trying it in one game in question known as Road Wars, a 2001 PC Combat Racing Sim that uses Direct X 7.0. In Windows 10, the gameplay runs fine but the loading menus and such are incredibly slow and choppy, and dgvoodoo fixes this. However, in races, the game shows strange graphical artifacts in the form of white/black dotted lines when using dgvoodoo2. The game uses DirectX 7.0 and requires d3drm.dll to run. Testing Gabriel Knight 3 with new version - default gamma is too dark (normal without dgvoodoo), also forcing higher resolution cause mouse pointer and other menus to glitch and smear picture. Also something wrong with Gabe's eyes 🤣.
UPD - seems like glitched mouse cursor and menus fixed by disabling incremental rendering!
UPD1 - or maybe not 😵

Some things regarding Drakan's Lens Flare Effects. They were problematic even on the ancient NVIDIA GeForce4 MX 440, sometimes making the game crash. I also remember crashes on ATI Radeon HD 4890. I don't remember whether they were rendered correctly on these cards. Here's a screenshot when they're rendered via dgVoodoo (haven't had crashes so far): 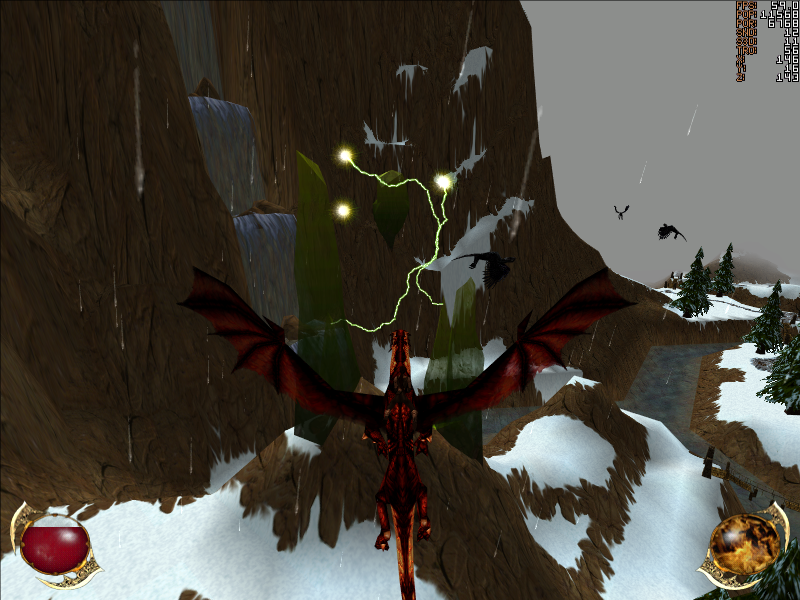 This appears to be rendered correctly. Another bigger screenshot and another smaller (where lag spike is apparent). The lag spikes are more severe at greater resolutions, but even at 800x600 they're distracting. Natively on GeForce GTX 750 Ti, those round light shaped things are absent on my end. On a laptop with Radeon R2, they're absent as well and additional graphical artifacts are produced.

I also noticed the game manual mentions the sun, where Lens Flare Effects should also step in the action. I don't remember ever seeing the sun in the game. Maybe the sun is there in the very first version that was released.

A test saved game with above scene