That's odd... my gaming PC is running the Windows 10 Anniversary Update and it's still in Test Mode. Perhaps the OS stays in Test Mode if you first install an older build of Windows 10, then update?

Test mode isn't the problem. It's Driver Signature Enforcement. If using an unsigned driver, previous versions used to keep it there no dramas (mind you I have not formatted my desktop machine since it was upgraded from Windows 7 to 10 last year). The behaviour only became apparent after installing the Anniversary Update, which means in order to use the card I have to manually boot with Disable Driver Signature Enforcement , and reinstalling the driver every time.

Did I mention "Driver Signature Enforcement Disabled" must be manually set every time now? It used to be permanent after loading the self-signed driver file. Not anymore. So annoyed.

I'll have to take a look at this on another one of my PCs. Are you sure you're signing the driver in C:\Windows\system32\drivers\cmipci.sys? Either way, I'll install Windows 10 Anniversary Update on one of my Core 2 Duo machines and see if I have the same problem. Are you trying to use a PCI or PCI Express x1 CMI8738?

I managed to get a C-Media CMI8738 PCI SX to work using the Peek/Poke method described in this thread, but the sound that it made was terribly distorted. I'm not sure if I got a defective card or if the version of the card that I got off of eBay is too new and doesn't have a real OPL3 in it.

Everything except for the OPL3 sounded normal on this particular soundcard so it is hard to believe that it is just a defective card, but who knows? These CMI8738 cards are made extremely cheaply and with very poor quality control in China so it could be defective.

BTW, Has anybody gotten a real Yamaha YMF724 to work yet in Windows 7 32bit or 64bit using this Peek/Poke method? It seems like such a waste messing with these crap quality CMI8738 cards when I have a real, high-quality, Yamaha YMF724 that I would like to be using on windows 7/10 instead of on an old Pentium III Windows 98 SE machine like I have it on now.

I've got a motherboard that will accept an Ivy Bridge chip that I know for sure that the Yamaha will work on because I can get sound out of it. Now, if only I could open up that port and get it to do hardware passthough in DOSBox. I believe it can be done but I just don't know how to find the correct address and what to modify it to once I do find it.

Any help out there from anyone that has done this successfully already?

Try the instructions I posted at Yamaha YMF7x4 Guide for Windows 7 32 bit.

I could never get a CMI8738-SX to work properly on Windows 7 or Windows 10 (constant BSODs), but what I did notice with every single CMI8738-LX I've set up is that the OPL3 output, for some unknown reason, is EXTREMELY quiet and there seems to be no way to up the volume any higher. Normally, I run the CMI8738-LX's output into the Line In on my motherboard's on-board audio and use it exclusively for hardware OPL3 (which, by the way, has the Stereo outputs reversed), but it seems you can't use just the CMI8738 by itself unless you lower the volume levels in the Windows mixer.

@Stretch: I tried the method that you suggested and posted the results on the "Yamaha YMF7x4 Guide" thread. I didn't want to hijack this thread too badly.

I've also since read on other threads on VOGONS that this CMI8738 doesn't even have a real OPL3 anyway. It is only a clone and not a perfect one at that. This is even more reason to redouble my efforts to get my real Yamaha YMF724 fully working in Windows 7 32bit rather than wasting any more time on this cheap quality Chinese knock-off.

The signal to noise ratio was very bad on this CMI8738 card anyway, even if I could have gotten it to work properly. Maybe it would be good if you had the version with the digital output so that you could get a clean signal out of it, but the cheap versions of this card are very poor quality. 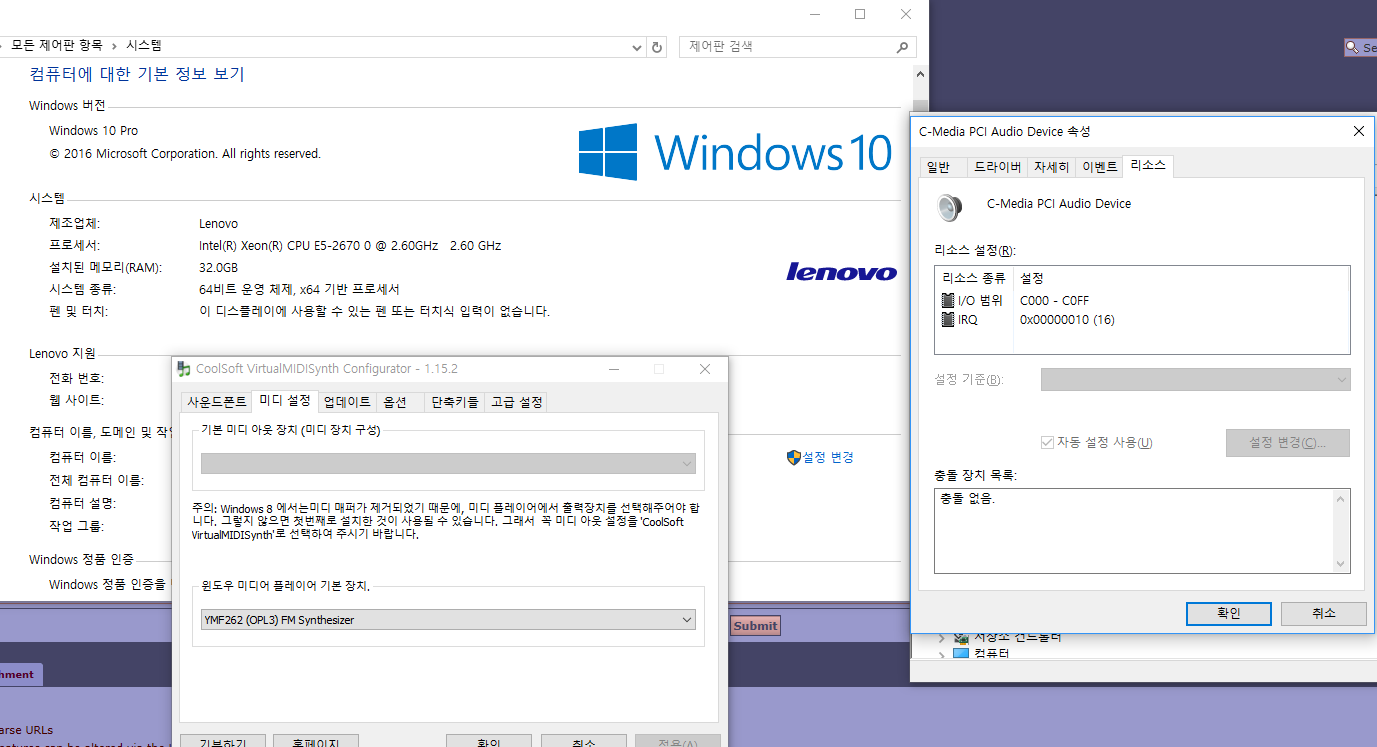 The Yamaha cards have a true OPL3 in them instead of the imperfect OPL3 clone that is in these CMI8738 cards.

I got one of the CMI8738 cards working and it had very poor sound quality compared to the Yamaha YMF724 card.

A CMI8738 with digital output might sound better than the one that I have that only has analog output, but it will still only have an OPL3 clone and not a true OPL3.

Here is a link to my guide if you want to check it out: DOSBox Guide To OPL3 Passthrough Using Yamaha YMF7x4 Series Sound Cards (Unsupported)

Could someone please explain to me where C-Media's OPL3 implementation goes wrong? Unless I'm deaf, I have yet to find a single instance where the CMI8738 sounds off compared to the YMF262. In fact, I outright refuse to use a YMF7xx because even though its sound pitch is subtly lower than a YMF262 (and I do mean VERY subtly lower to the point where 99% of people won't even notice - these cards implement the YMF289, FYI), it's clear as day for my oversensitive ears and I can't put up with it.

I do use YMF 7X4 OPL passthrough in windows Xp. (https://youtu.be/lxS0ddULd_Q)
I don't like using 7X4 in 32bit windows vista or higher because

1. no memory benefit VS 32bit XP.
2. no need to porttalk thing because XP natively detect FM port 388 and even can be default midi mapper.
3. above Vista OS, my Audigy card may lose hardware sound like EAX.

I also suffer bad CMI8738 card never output any FM, and the answer was major company product.
Early posts of this thread have good dubbed canyon.mid. If your card don't play like it, it's card's problem.

I'd guarantee it works good if you get 8738 MX cards(100% have optical connector), Terratec or Zoltrix could be good choice.
But beware there's no FM playing via optical connectors unlike DS-XG.

Do not buy cheap one like startech in ebay, also do not buy any ASMEDIAed PCI-e cards.
I have a $4 YMF744 XG from china, it can't be compared with my another Hoontech XG or Xwave.

Just an fyi. finallly got it working again without having to reinstall the driver every boot.
1. DISABLE SECURE BOOT - this is important for Step 3
2. Consider using the Group Policy Editor setting under Administrative Templates > System > Driver Installation > Code signing for device drivers (set to Enabled - Ignore or Enabled - Warn)
3. THEN set bcdedit -set TESTSIGNING ON and bcdedit -set NOINTEGRITYCHECKS ON

I will add this if you're upgrading from Windows 10 Anniversary Update to Windows 10 Creators Update: you will have to reinstall the drivers and redo the process MaliceX outlined. Both of my Windows 10 PCs with CMI8738-LXes needed the drivers reinstalled after the update.

I recently salvaged some parts from a dead PC. Among them was a "Genius Soundmaker 5.1 Value" (with the CMI8738 chip), so when I was testing these parts to see if they're still usable I was searching for drivers to said card. Lo and behold I came across this thread describing the chip being able to do OPL playback natively. Long story short I set up a rig and got it working with the resources provided here. I've decided to record the audio output of the chip and audio recordings of NUKED opl emulation for comparison and a bit of fun and share them here for for your listening pleasure (or displeasure) 🤣
Sadly, the recordings did not turn out as I'd have liked (some audio hickups, probably due to recording all if this on the same machine) but they're still good enough to compare between IMO.

speaker output -> line in on the creative card

Audacity for recording, all recordings were normalized before exporting

DOSBox Megabuild 6 for OPL passthrough to the CMI8738
DOSBox ECE r4019 for recording NUKED emulator
I've also recorded the General midi from the Creative card just for the heck of it, I like the way midi sounds on this card a lot =)

NOW! On to the good stuff. You can download the recordings (.flac format) here: https://drive.google.com/open?id=0B3ULEFDPIkZ … dDAzcVdJVEFIV1U

Got OPL passthrough working on my Philips PSC605 under Windows XP, but unlike my Zoltrix Nightingale it can't mix OPL to the SPDIF output. I think the whole PSC60x series uses rebranded CMI8738 chips and on the HP OEM PSC1602 you can actually find both rebranded and non rebranded CMI chips.