Another interesting thing I found out yesterday while instaling OS/2 Warp 4 is that Warp 4 detects, installs and uses ES1868 100% including MIDI playback right out of the box, I was amazed.

Duplex is playback and recording at the same time, mainly needed for voice chat and the like. There's half-duplex and full-duplex. The ES1868 supports full-duplex, it can do playback and recording in CD-quality at the same time. Who told you the ES1868 does not support duplex? Almost every sound card, apart from FM-only cards and some very old ones, can do at least half-duplex.

Right in this topic on page 4 they say the 1869 added duplex, inferring that if it was added then the earlier 1868 model didn't have it. Also people saying things like "The 1868 is only full-duplex in mono, the 1869 is full-duplex in stereo". And since I'm looking for full features and in stereo that likewise worried me. Many more places say similarly worded things like that... but I'm still learning so I could TOTALLY be misunderstanding!

Duplex only refers to the feature of being able to record and playback sound at the same time. There is half-duplex (which really almost every card supports, see my previous post) and full-deplux. In full-duplex mode, playback and recording is done at the same time (like a telephone) and by design at the same quality. In half-duplex mode, the software will switch between playback and recording (much like a walky-talky) with recording using lower quality. You need full-duplex if you want to record the stereo mix of the sound card. Otherwise, just don't care about it. You don't need it.

I have no idea if the 1868 can do full-duplex only when used in mono modes, but again, it's completely irrelevant for 99.9% of normal usage.

Thank you for the explanation! Looks like nothing I have to worry about for gaming.

I actually got in my two ESS ES1868F cards today. Any noticeable differences between them? I'm going to use a Dreamblaster S2 on one of them, and maybe try to get the IDE for a CD drive to work. Don't think there's much gaming use for the Binaura 3d on the one, is there? (couldn't find any game lists for this)

What are the jumpers both have? My ES1869F doesn't have any on it. Wavetable address and/or internal amp on/off? 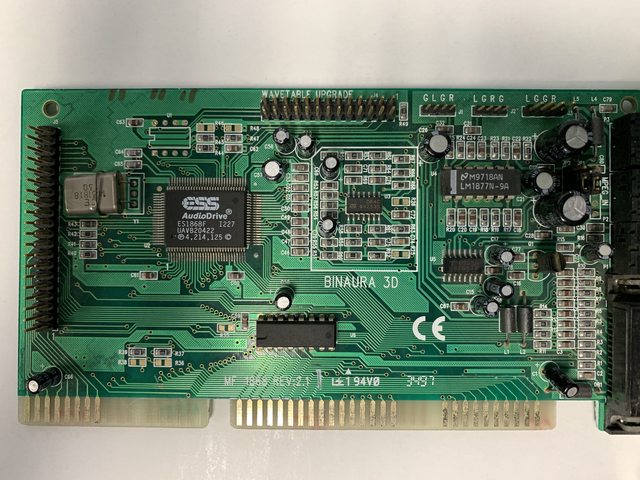 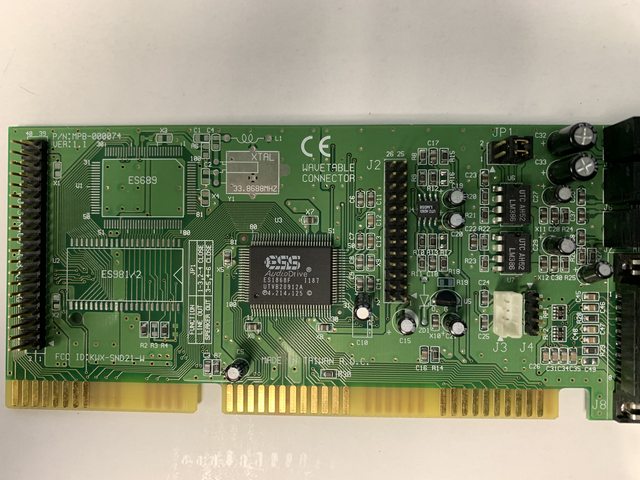 The second card is the pinnacle of cost-cutting, even the crystal oscillator is omitted. The first one looks to be better. But my suggestion would be to listen to both of them and pick the less noisy one.

The jumpers are for switching output between speaker level and line level. There's one jumper for each stereo channel.

The second card will probably have better output with less noise, since it uses two separate amplifier chips, causing less cross-talk between the channels. The missing crystal oscillator can be an issue however if there's no 14 MHz one on the mainboard.

So conflicting advice from you two! I'll have to compare myself...but that's really not going to help as I'll have to swap out cards between tests and will forget what the one I just ran sounded like 🤣.

What's weird is the one in Phil's video, pic below, which people reference a lot about these ESS's, seems to be pretty close to the bottom one I pictured above. 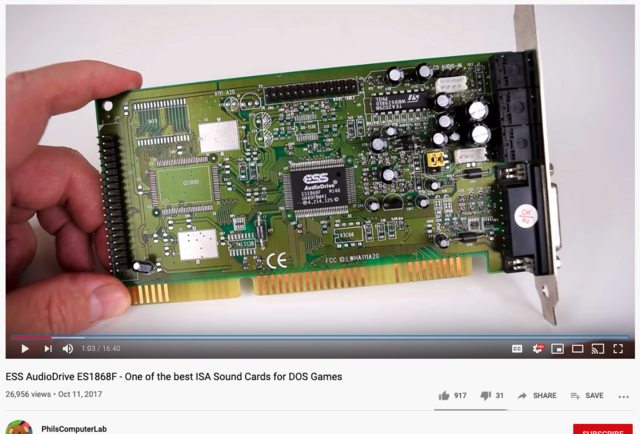 You can see Phil's (to my layman's eyes) is missing BOTH the crystal oscillator AND the 2x separate amplifier chips...yet he still thinks it's one of the best cards for DOS... weird how there's so many flavors of these.

Just for fun, anything unusual stand out about my original ESS, an ES1869F version with wavetable header but no IDE? This is the one I've been using for the last couple months to great fanfare (besides playing speech too slow in some 2002ish Win98 games). Has oscillator but combined amp? 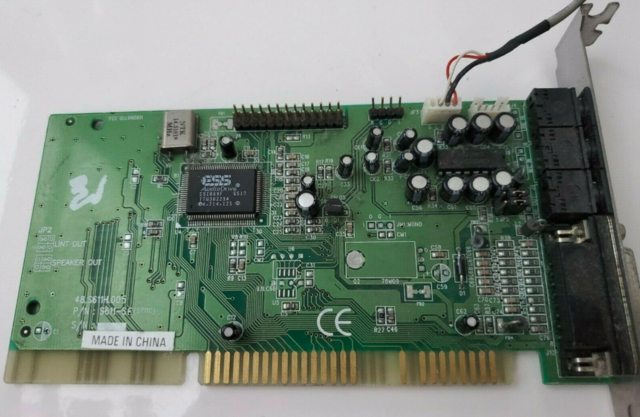 I think I should also post as a reminder to people that getting ES1868F's to work in both Windows 98 AND DOS can be very hard (I had issues with both cards on a MMX 200). In researching my issues I found at least a dozen people on this forum and others with similar problems as me. Took around 12 hours of trying everything in the book and numerous drivers to get it working (no exaggeration, I think that driver combo #10 finally worked). It's not ALWAYS as easy as it shows in the videos sometimes - thankfully my ES1869F installed PERFECT and easily every single time - don't know if that was because it was on a different computer or what.

Phil is hardly a hardware guru.. But to be honest lack of an oscillator is not an issue for 18xx cards as long as your motherboard ISA clockspeed signal is clean - this would only be a problem for older boards that don't really like a PnP card like this to begin with. I have the same card and it has a clean output.

weird how there's so many flavors of these.

That's because ESS just made the chip, but not the sound cards. The chips were cheap, so almost every maker of hardware pushed out a card.

I don't know how many of these cards I own currently, but I also never had two of the same.

Most of the ESS ISA cards are pretty good once you disable the onboard amplifier in terms of sound quality.

Won't blow the doors of a properly high end sound solution, but perfectly adequate for DOS and early windows gaming. For what you pay, they are good value.

I've got a question regarding the card I have (picture attached) - it looks different than the ones I saw - branded by Compaq. I have it for like 15 years.

Is it any good? Does anyone know this specific model? This is ES1869 not 68 - not sure how different they are.

I have that one in my Compaq Deskpro 6400. It's a good card, but of course it's lacking a game port.

ES1869 is basically ES1868 with an integrated 3D Spatializer. It requires different drivers but it is virtually the same chip otherwise. Your card lacks a joystick port, wavetable header and an IDE connector but for basic SB Pro compatibility, decent PCM audio and ESFM music it is a decent card.

My 1869 works with 1868 drivers. I don't care about 3d enhancement, so I don't care if the drivers can't toggle that feature. The older drivers allow manual resource assignment, so they have the added benefit of not needing a PnP manager.

Bought an interesting noname card. It has four ESS products; ES1868F (PNP), ES981P ROM, ES689F Synthesizer & ES938J 3D Effector. With appropriate buzzwords, it could have been something to boast. The card needs some maintenance but somewhat miraculously all chips are in good shape.

You can download the tool here (source included):
http://falcosoft.hu/esrecsel.zip

I have also made a video about my test:
https://youtu.be/u26HhHKbOus

@Edit:
Post edited since according to the tests of Appiah4 the tool also works with ES 1688.

I have one, but not in a built PC at the moment - I will get around to this sometime and let you know 😀