I have a similar issue with a a 2.0. There is a topic somewhere on vogons. So far my plan was to use assembler and the SDK docs to try to send some diag bytes to the card but I haven’t got that far yet..

ok got another idea

would that even work? would the card even boot thinking its a Ct4500 ?

I think that would work. No harm in trying.

I have been doing a small bit of guesswork with my responses in your thread - but I believe the eeprom just holds configuration information. If flashing the AWE64 information doesn't stick - it could be either a pathway/logic/programming issue independent of the chip - or the chip is just shot.

If the chip is shot, just order another one, replace it, and try the AWE64 firmware flash to see if it takes. Saves you sacrificing another card as well as having to desolder two chips (old and replacement).

guys you wont belive this

Now i have TWO broken ct3670 cards
both of them give a ERROR BAD SERIAL ID CHECKSUM ( VENDOR ID 0) error upon boot on different PCs.

what is wrong this this model i can´t belive it.
and again the dell flashing tool does not work with any of these two cards, it doesnt flash.

the only hope then is to take this chip from another card and put it on the ct3670?

Weird. I've got one definitely working CT3670 and another that I haven't tested.

Something smells fishy though. I haven't seen any other complaints about dead CT3670 cards on here.

Working CT3670 here too. Agree that one card could be fluke, but two cards showing same error suggest problem isn't in the cards themselves.

today i got my third CT3670
and this one finally works, i cant belive it, the first two gave Erros on boot!

But it has issues,I noticed that the volume decreases and Increases by itself after some time.
happens on all games..for example volume can sound fine while playing but after a minute of gameplay it goes way up, and after another minute volume goes down again.
could be that the capacitors are really bad? or voltage regulator? i did notice the big crystal oscillator has a small bent

then i think i can buy this to read the flash from the good card, and flash the broken card, without desoldering the chips from the Soundblaster. 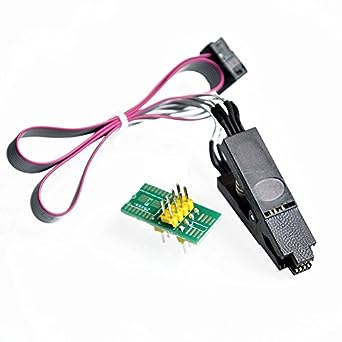 The chip is not in system programmable via external means, connecting such a thing to a non powered card will at best do nothing and at worst kill the card's IO pins connected to the EEPROM or the programmer itself as it tries to partially power the entire card. Connecting it to a powered card will only fight with the IO pins and you still risk damaging them.

The chip is not in system programmable via external means, connecting such a thing to a non powered card will at best do nothing and at worst kill the card's IO pins connected to the EEPROM or the programmer itself as it tries to partially power the entire card. Connecting it to a powered card will only fight with the IO pins and you still risk damaging them.

OK then i will forget my idea

but it is difficult to remove with just soldering iron..it has 8 legs. and i dont want to burn it

Here are some tips for doing that. I've done it a lot, mostly for routers etc. get some liquid flux (preferably the no-clean type) and desoldering braid. Also get either tweezers or a small screwdriver, the kind that you use for eyeglasses. Make sure the screwdriver is sharpened, you will be using it as a wedge. If you have someone helping you it's easier as you can have the second person use the tweezers; if you're alone and only have your 2 hands you will have to use the screwdriver instead.

Apply a generous amount (but not excessive) of flux over the pin/pad solder connections on both sides of the chip. Heat your soldering iron just enough to melt the solder. Place a length of the desoldering braid over the pins on one side in such a manner to cover all of them, then press it down with the side of your soldering iron tip. Hold the tip there until the solder melts and starts wicking into the desoldering braid (you can tell as the braid changes color from copper to silverish). Lift the tip and the desoldering braid, cut the length of the braid that is now saturated with solder, place the braid back over the pins, repeat until you don't get any more solder wicking up in the braid. Do the same on the opposite side of the chip.

Now, either have the other person grab the sides of the chip (the ones without pins) with the tweezers and gently pull up, or insert the tip of the screwdriver under the chip between it and the PCB, and apply pressure down so that the tip pushes the chip up from underneath. Put again the tip of the soldering iron over the pins on one side this time without the braid so you heat them up uniformly until all solder is melted on that side. The tip of the screwdriver (or tweezers) should lift all pins on that side at once. Don't lift more than 1mm, or just enough that the pins don't touch the pads anymore. Do the same on the opposite side and the chip should pop free.

(edit) don't be afraid to burn the chip, that won't happen unless you set your soldering iron too hot and take a really long time with it in contact with the pins. Those chips are made to withstand reflow, which heats the whole chip at the temperature that melts solder for 10 seconds or so. They are specifically designed to go through such treatment without harm.

good explanation!
at what temperature should the soldering iron be? i have a soldering iron that has a meter and i can choose the temparature in degrees Celcius

Going to up this thread.
Got the CT4380 AWE64 card that cannnot be detected at all - even not in the list of PnP cards on the BIOS startup screen.
Looking at the card I cannot say that there's something wrong - everything looks very good, no lines or components seemed to got any damage. Everything's fine. But the card's doesen't work at all.
If anyone got the experience throubleshooting AWE cards please give me a direction to dig in. I've looked for SB2AWE utility package by Sergey Samsonov, but I could not find any alive link to the file sb2awe.zip. If anyone still keep it, please share, I'll try to reflash the card's EPROM.
I can throw the card away at any time, but I'll try to get it back alive first 😀

I just registered to post to this topic 😀
I have bought recently a CT4380 and I was very happ for 1 single day...I still don't know yet proper configuration to have the card be usable with every dos game (I run DOS 6.22 only, purely). On the next day of purchase I was playing with the settings in mixerset (I had the amplifier enabled and the sound volumes had big differences between games...) and once the sound started to crackling (sorry for my English 😁 ) and then nothing. I restarted the PC and still was not good then tried many things with the configuration and all ended that in the beginning POST screen didn't show already the card and neighter configuraiont was detecting it (diagnose, games, etc.). I tried in another isa slot, it was detected but after couple of minutes same thing. At my desperate feelings I read in one topic that EEPROM can be faulty and can be re-flashed with app from DELL site. I did it but nothing changed and at last the card was not recognized at all nevertheless what I tried. I put back my ESS Audiodrive (which is a very good and stable card but no extra features) and let it go. Today I thought I will just remove all installation, put autoexec.bat and config.sys back to simple configuration (I am not an expert also so it wasn't complicated yet 😀 ) and started the whole again from the beginning. And it worked! Today for 7-8 hours I am using that DOS PC and no issue found (despite my lack of knowledge that what is the golden rule to have it working all the time without touching the configs).
Also I have noticed that amplifiing capabilities are lost (probably due to flashing it), no option in mixerset for AGC and Gain but it works...I couldn't find any information if anyhow it would be reversible or anything to negate my actions and I don't know if it will lose its value due to this but maybe this helped...any information is much appreciated or anybody can help the previous guy to get the flash program 😀

Hi guys, thanks atomeec for sharing, it was very useful.
I came here cause had the same problem yesterday. I Installed my old CT3670 on a PS/1 mod 2121 (a 386@16 with ISA raiser card) three days ago and everityng went fine, till yesterday. No changes and on the dreaded boot the message appeared:
Bad serial ID checksum, expected:30 actual:3

I didn't want to flash the eerpom so I tried to put it into another machine, a P133 with Windows ME, and had no problems at all! The card was detected and drivers for synth, wavetable, joyport and IDE controller were installed smoothly.
"monkey r" supported Roland emulation natively.
So, the board runs fine in Windows me and not in real DOS mode? Is it possible? I didn't try to install dos drivers under WinME yet.
Any guesses?

Maybe it is not getting enough power with the PS/1 system. Maybe there is too much ISA bus noise on that system for it to work reliably.

You could also try cleaning the ISA riser edge connector with an eraser as well as cleaning the slot on the motherboard and the ISA slots on the riser. Folded paper that is folded thick enough to give some resistance when inserting into the slots works great. Insert and remove until the paper stops getting black marks on it from the oxidation and they should then be clean enough.

Thanks to your advices, I dug into the problem and was able to sort it out.
PSU did not caused the issue: I am using an external Switching PSU homemade (derived from an HP printer that provides 32V, 41v off load, and 1560mA) and switched to the original monitor's internal PSU (32V 65W so 2A) and nothing changed. Same after cleaning the contacts of the raiser and mobo connector. So I started to mess with the autoexec/config and found that disabling EMM386 and reverting all the changes made by memmaker did the trick. I reinstalled all the drivers from original CTCM and SB16 packages and Voilà!
It is possible that specific high memory locations are no good for CTCU/CTCM, have to go deep.
Cheers!