Never know about this thanks for sharing.

Is this a DSound3D emulator for modern Windows OS? I don't know anything about
this software?

Yes, positional audio only (not an EAX wrapper).

There is another way.

Edit: Oops, never mind, I posted too fast. This is for different use case. Don't try it, it'll cause circular dependency.

There is another way.

Edit: Oops, never mind, I posted too fast. This is for different use case. Don't try it, it'll cause circular dependency.

Interesting. But yeah, that wouldn't work for IndirectSound because I still load the real dsound.dll behind the scenes. It might work for DSOAL (not sure if it uses the real dsound.dll or not), but that would also change your system's behavior for every game, which seems a bit drastic. I think it's probably good to be able to try different dsound.dlls for troubleshooting purposes, even if it's slightly annoying to have to manually copy them. (I guess something like ALchemy's installer is the user-friendly solution to that.)

You can build OpenAL Soft (on which DSOAL is based) with WASAPI support only.
I do this way to avoid any possible problem 😁

but that would also change your system's behavior for every game

Actually, you still have to put game.exe.local file in its folder for the registry setting to be effective.

You can build OpenAL Soft (on which DSOAL is based) with WASAPI support only.
I do this way to avoid any possible problem 😁

Seems like an overkill since there's a config option for that, see here. You could set:

but that would also change your system's behavior for every game

Actually, you still have to put game.exe.local file in its folder for the registry setting to be effective.

Oh, ok, I guess I didn't read the description carefully enough. In that case I think I'd rather just copy the dsound.dll around anyway, but it's nice there's another option for DSOAL users if they'd prefer that.

I also just discovered that the registry settings that I had made in HKEY_CURRENT_USER to make IndirectSound work on my main machine were no longer there, presumably removed by some Windows Update. I had hoped that Windows would leave them alone (as opposed to changes made in HKEY_LOCAL_MACHINE, which involve modifying existing entries and which were known to get reset to Windows defaults by updates), but that appears to not be the case 🙁
Maybe this was already known, but it was new to me. I guess I should modify my instructions to make it clear that either method will have to be repeated periodically. It is more annoying to have to enter in new keys (what I recommend doing in HKEY_CURRENT_USER) than modifying existing ones (the alternate method in HKEY_LOCAL_MACHINE), but I guess I still prefer modfying HKEY_CURRENT_USER for safety reasons because you can always just delete the keys and get back to the default Windows behavior. I guess I could also supply a REG file to automate the process, but I don't think I'd want the liability if someone's registry got messed up (my existing instructions are intentionally not very detailed for this exact reason).

UCyborg, I don't suppose you know of any way of preventing Windows from removing entries? 😀

I have an issue with Indirectsound (v. o.20) with Colin McRae Rally 2005 (and maybe others).
Without Indirectsound I found it sounded off (5.1 setup) on Win 10 x64, especially on rainy stages the raineffect would drown out other sounds.
With Indirectsound it sounds much better, however for some reason my co-driver doesn't call out instructions anylonger.
I tried changing settings in the dsound.ini but nothing worked.

Is there any way to solve this?

Hi Procyon! Emailing indirectsound@gmail.com directly is probably a better way of getting support, but I can give you some ideas here.

I don't have the game, and so I am unable to test personally. The first thing that would be good to do as a sanity check would be to use IndirectSound, but set the number of hardware buffers to 0. We would expect the output to be the same as when not using IndirectSound (i.e. the rain effect would be too loud, but your co-driver would be calling out instructions). If that's the case then proceed to the next paragraph. If that is not the case, however, then there may be some other bug with IndirectSound.

Next, it is hard to say without doing some debugging or troubleshooting. Since I don't have the game I would probably have to send you a debug version of IndirectSound and ask you to do some tests and send the results back to me. The following are reasons I can think of at the moment why you might not be hearing the co-driver:

Again, assuming it is the last option (which seems most likely), I would probably need to send you a debug version of IndirectSound ("debug" in the sense of having extra debug/troubleshooting features enabled to try and help track down problems), so we will need to get in email contact for that.

Thanks, when I have time I will try the points you mentioned out.
Will report in within 2 weeks.

I don't know if it might interest anyone (maybe jonpol 😃) but OpenAL Soft now supports EAX! https://github.com/kcat/openal-soft/commit/19 … 2577669fc25caf6
However, there is still no DirectSound wrapper that makes use of this new implementation (OpenAL games that use EAX should already work).

DSOAL is already a thing (routing to the OpenAL Soft virtual device): http://vaporeon.io/hosted/dsoal-builds/ (source from the same author of OpenAL Soft)
Old OpenAL EAX (not EFX) must use a wrapper too (OpenAL32.dll+soft_oal.dll), and is already a thing: https://github.com/bibendovsky/eaxefx

They perform well, you can test EAXEFX in Unreal 2 / UT2004 / UMX / etc. (forcing the "native" OpenAL path and putting the DLLs in the *GAME* system folder) 😀

I know these things but that's not what I wrote. EAXEFX is now useless as the EAXEFX developer himself has implemented EAX in OpenAL Soft: https://github.com/kcat/openal-soft/commit/19 … 2577669fc25caf6.
DSOAL, according to the developer kcat (please read here: https://github.com/bibendovsky/eaxefx/issues/24), has its not perfect EAX implementation, the new one implemented in OpenAL Soft would seem better, but currently DSOAL still uses his.

For OpenAL EAX games you now only need OpenAL Soft (compiled from source https://github.com/kcat/openal-soft). For DirectSound games, hopefully DSOAL will be updated or maybe IndirectSound. 😄
Anyway DSOAL still works, but with its old implementation.

About the building process 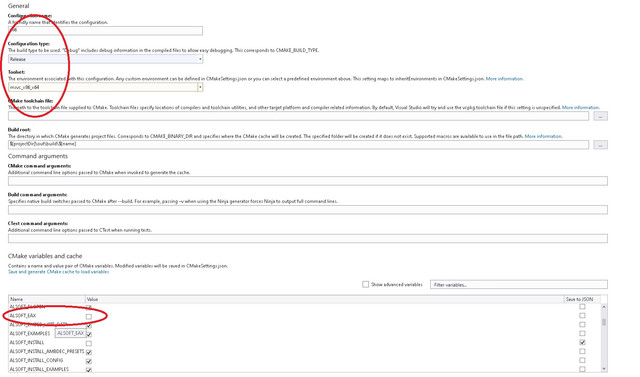 DSOAL and OpenAL Soft have the same dev.

I have tried to compile OpenAL Soft with Visual Studio in the past but without success, hope you have better luck than me. I solved it with MSYS2 (if you want, I can share the binaries).

Yes, the developer of OpenAL Soft and DSOAL is the same, but it is very concentrated with OpenAL Soft (DSOAL is not updated since November 2021).
EAXEFX developer created the implementation for OpenAL Soft (based on EAXEFX).

EDIT
I have attached the OpenAL Soft binaries.
For Doom 3, Quake 4 and Prey, use the EAXEFX app patcher (fixes bugs in these games).

I can confirm the last (built from the master branch) version of OpenAL Soft got EAX correct without the use of EAXEFX.

You only need eaxefx_app_patcher.exe for those three games. This is what the EAXEFX site says:
"Resolved issues:

My alsoft.ini, being the package installed in C:\ (for the speakers configuration presets)

Just use Unreal 2 as benchmark, setting UseDefaultDriver=False in unreal2.ini and enabling the EAX 3 in the game options menu.
Severnaya sewers or Training grounds are perfect to test EAX.