Will test the quakes with sound tomorrow.
During gameplay with sound i didn't observe any color related issues, but if the artefacts are subtle i may have missed them.
I don't have ATI cards, but will check with GD-5428 and 5434 tomorrow.

I'm having all kinds of consistency issues with my M919's. I'm having trouble getting the w95 Virge VL drivers working again.

How did the 5428 w/sound card and Quake go? For my case, I needed to stare closely at the Quake timedemo the whole time without blinking much. I see red turn to green, and for brief flashes in time, the whole screen turn to a white or red flakey mess. It is possible the issue is just with the Magic S23A. I was too burned out with PC Chips to try other sound cards.

Are you saying that, for your system, the 1 MB cache fixed the issue if >32MB perf. drop? This doesn't make sense to me because 256K-WT should do 64 MB.

Tested and for visual glitches in Quake 1 with audio enabled (ESS 1869). Used S3 Trio64 VLB and MGA PCI.
Didn't notice any issues so far. Ran time demo and played the game itself.

You were planning on using the GD-5428 VLB for the Quake w/audio tests. Are you still able to test this card? There is no issue with PCI cards and the issue with the Trio64V+ is much less prevalent than with the VLB versions of the Mach64 or 5428.

What FSB are you running?

I don't understand how you did not witness a Quake v1.06 slowdown when using exactly 64 MB and either 256K or 1024K. I witnessed this with both of my M919 boards. I tested for this several dozen times and it was always there, and on both boards. What BIOS are you using? I am using this:

This is what I see. Sometimes, subtle like a colour swap here. Usually with the Trio64V+

But with the GD-5428 or Mach64, I more commonly and frequently see these, but it doesn't stay like this:

Better yet, if you are able to run WinQuake from Win95, the frequency of the corruption is much greater. Make sure you are running it with sound. The corruption occurs not only with a Trio64V+ VLB, GD-5428 VLB, Mach64 VLB, but also the Virge VLB. I swapped the sound card from the S23A to an Audican32 plus and the issue remains. But with PCI, no issue.

This is some massive visual degradation.
Nope - nothing like that.
But will try with GD-5428 tonight.

Finally.
I confirm that Quake 1 freaks out on this board when 64Mb RAM is present. Regardless of amount of L2 cache and other parameters.
Don't know what i was writing last night. Going to scratch through that sentence in my previous post.
The rest of the stuff does not seem to be affected by this issue.
You are probably right that it is a Quake specific thing on this mobo.

It is certainly reassuring to know that my M919's are equally as flakey as yours concerning the 64 MB perf. sinkhole and Quake visual glitches. Thanks a lot for testing this. I wonder if it has to do with how the VLB is implemented on the UM8881. Were there any other [non-PC Chips] UM8881/8886 boards with VLB slots?

Looked at the inventory here - 2 VIP boards with UM8881:
Octek Hippo 12 VIP - looks like i tested it with 32Mb EDO RAM only since 256Kb L2 cache in two banks is faster than 512Kb single bank. Left a note that 128Mb RAM works well, but perf is lower because of the limited cached address space.
Chicony TK8880F / 2066A2 - looks like this was tested with 32Mb RAM only too.

Will spin them tomorrow with the CL GD-54## VLB cards + sound and see what the result is.

@barry07
Do you mean the jumper settings of the Abit PB4 motherboard or the datasheet of the chipset ?
The first is available here: https://stason.org/TULARC/pc/motherboards/A/A … B4-REV-1-2.html
The second is here: https://datasheetspdf.com/datasheet/M1487.html
Hope this helps.

Not just GD-54**. It also happens with my Mach64. I bet it will happen with your Trio64 as well if you run WINQUAKE from within Windows 95 and don't blink. I can see subtle discolourations with my Trio64V+ and Virge VLB card, usually in WINQUAKE. So, seems to me like the SiS VIP boards may be a little more desirable now. Have you compared SiS496 VLB vs. UMC8881 VLB for graphics performance?

Diamond stealth dram does not show issues here but i dont run winquake, only q1.
Same applies to virges pci. But if you see issues with winquake then they will show here as well.
Dont have ATI cards so cannot comment on them.

SiS are the better chipset overal compared to UMC, in my opinion. They are faster, less glitchy and scale more.
Asus PVI is all time favorite. Easily one of the best of the best classic 486 mobos.
Tried it tonight too for this issue. Came clean.

Yes I mean jumper settings 😀 First you wrote, that your Abit PM4 done 200MHz on it…. Also have Abit PM4, but not PB4. Problem is, that I can’t find jumper settings for Am5x86 on this motherboard 🙁

Hey barry07.
I think there is some misunderstanding.
I only have 2 versions of Abit's PCI/IDE Socket 3 motherboard.
Never heard of PM4. Can you post a photo of it ?

Linked the the Abit PB4 jumper settings in my previous post.
All versions before 1.5 cannot go past 160MHz - some circuitry is missing.
1.5 can do 4x50=200MHz, but only after a minor hardware mod - change of the voltage regulator that can handle 3.45V and 4V.
The picture in the related post shows the jumpers for that configuration - you can follow that for easy.

Thank you for the photo.
Didn't know about this motherboard until now. Online search reveals nothing, including one of my previous posts where i misspelled the PB4 to PM4. Sorry.

Looks like an assembly with potential.
Up to 1Mb L2 cache.
Voltage regulator for 3.45/4/5V.
Clock generator goes to 83MHz.
It is not clear which are the clockgen jumpers. If JP13 and JP14 - that is a bad sign - potentially no wired options for 60 and 66MHz. If the red jumpers - then high chance you can get the CPU beyond the 160MHz.
CPU jumpers look messy. You are running 3x40=120MHz. I would experiment a bit to find the jumper for 4x multiplier.

Had this motherboard for some time.
It came with 486 socket only and solder pads for 386 CPU.
Today slapped on it a 40MHz rated AMD 386DX from dead motherboard.
Took a moment to figure-out the jumper settings until it lit on 386 hardware path.
Ultimateretro and stason contain incomplete description - RN15 needs to be in the position shown in the picture below. 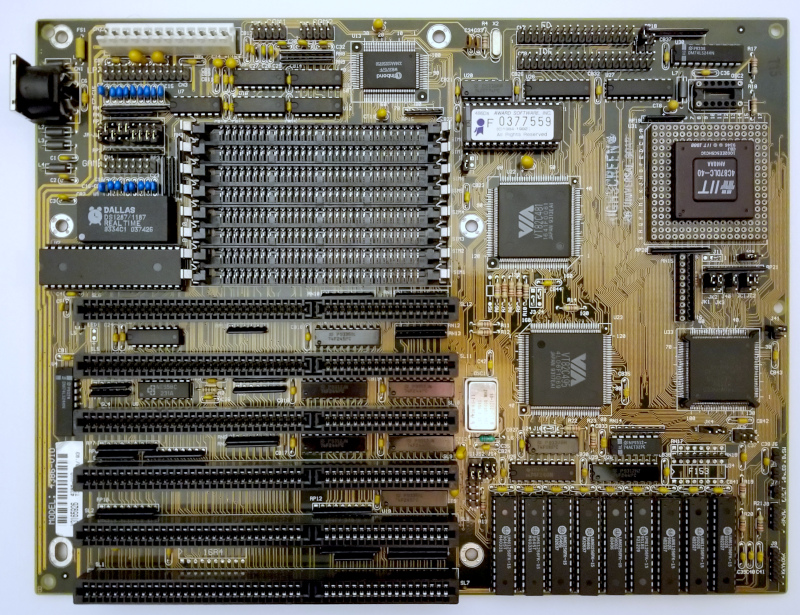 I examined before other motherboards based on VIA's VT82C481/495 chipset and kind of knew kind what to expect.
Unpretentious assembly.
Integrated IDE, FDD, COM, LPT which is nice.
Takes any memory modules and L2 cache chips.
Performance is so-so.

The motherboard came with BIOS version 1.4-something.
There is 2.0 available online. No observable difference in performance and stability between them.
DOS interactive graphics (games, benchmarks) run stably at 50MHz but Windows 3.1 and 3D Studio (complex compute) were not fully stable.
For them had to step down to 45MHz.
All BIOS settings on max.
Cirrus Logic GD-5434 video cards didn't work on this board so used ET4000/W32i instead.

Overall decent system but there is much better out there.

@feipoa
If you turn-on the parity check on your 1Mb L2 cache modified Biostar UUD motherboard - do you get a warning during POST ?
Don't remember checking this back then when applied the mod to one of the mobos here, but fired it up yesterday and saw that.

My memory is that the parity option never worked great on the UUD and I always leave it disabled.