what SSD for XP ?

hello everyone.
I was just reading this thread I found while googling Anyone Know of TRIMing Software for Windows XP?

my questions are: what good SSD can we purchase now for XP ?? do we have to purchase 5 years old SSD's that will be hard to find ??

now a 120GB SSD does cost less than a 64GB USB memory stick so it's a good time to get some.

I have checked all mainstream SSD manufacturers websites and downloaded their SSD optimizing tool but they don't run on XP.

they don't even have a link for the legacy versions

I know there are some after market tools for SSD but I think they will not be as good as the original one from the SSD manufacturer.

I may understand that a current SSD won't be well optimized with an old version of the optimization software but I am afraid it does not even detect it !!!

surely any modern SATA is way better than that thing with Sanforce controller.

The result was horrible. It "ran" like a snail. Or like a slug, not sure.
When I used Windows 7, it was blazing fast - of course I did my homework and knew of the alignment issue.
So even on the first try I installed XP on a safe, aligned partition previously made with the Win 7 Setup DVD..

2-3 years later, when SSDs became the norm, I upgraded my father's XP machine with a 120GB SSD.
Also Sandforce (newer gen ?) and "made" by Kingspec again. This time, XP ran just fine.

Long story short: First gen SSDs are not good, not even for old OSes like XP.
If you can't get hold of a SSD that suits XP, just get an SSHD.
But not the first gen of the Momentus XT.

Or use the best method - get a real RAM drive that uses memory modules, a backup battery and installs into a PCI/PCIe slot
Little Windows XP (1,5GB base install) will be blazing fast on such a thing! 😁

i use vertex 2 drives since years, and never ran into a issue at least if they new and straight upgraded to latest firmware there is nothing to worry.

And they perfect for XP as they don`t care about TRIM anyway.
As all content is stored compressed on the flash.

Mine has now seen 3 OS Generations from XP to 10.

I have some Samsung (256GB), Sandisk (256GB) and Intel (180GB) SSDs I use for my Windows98/DOS/Xp Computers.
No issues to report so far. I'm not using TRIM, just once I tried to launch the Trim app made by R. Loew Electronics on DOS that seems to work fine. But I don't really care if one of my SSD lifespawn is reduced 😀

can you share the model name of the Samsung's ?
the official toolbox is necessary to download the latest SSD firmware and Samsung uses this ruse to steal their customer's IP, SSD ID...etc
that's why you must accept the agreement when installing it otherwise you can't download a new firmware update (see pic below)

I don't care for the Magician or other competition's SSD toolbox if there was another way for updating the SSD firmware.
this thing really drives me nuts because with so many good alternatives on the market I am stuck with unknown brands or 5 years old SSD's 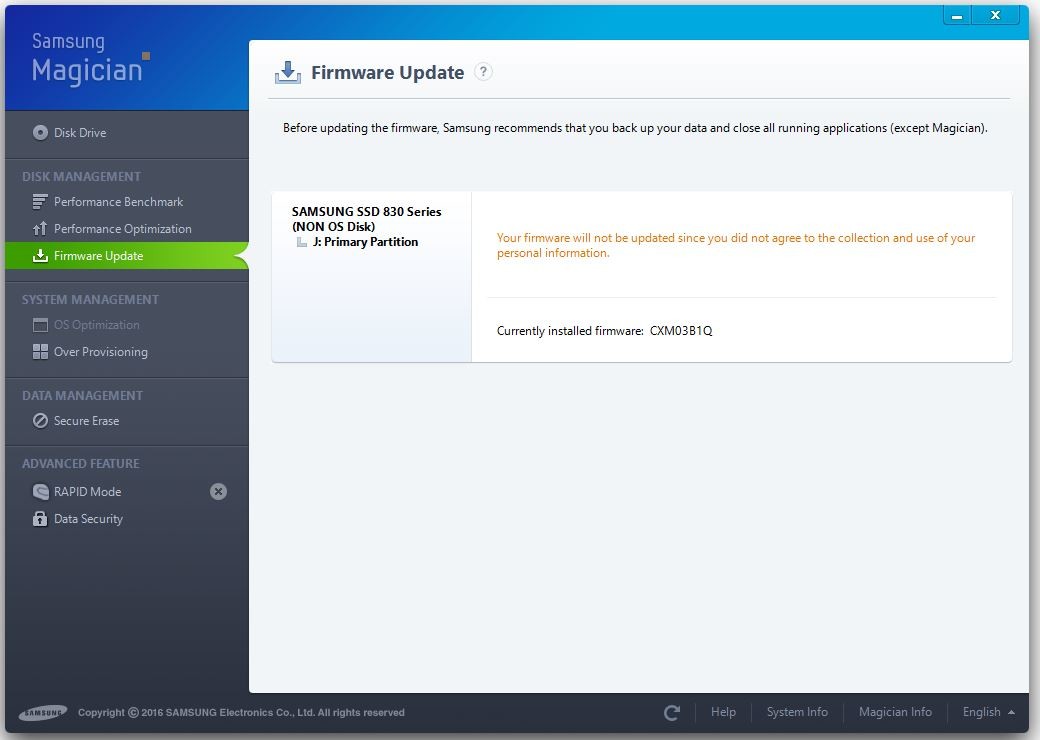 It's old Samsung drives, but I'm using them without this kind of tools and I didn't even try to upgrade their firmware. Just using them out of the box 😀

On my LGA775 system, I use a dirt cheap Crucial MX500 BX500 SSD and I dual boot between Windows XP and Linux. When I boot Linux, I mount the windows partition with the ntfs-3g driver and then I can use fstrim to trim it.

Theoretically, I think the Sandforce controller's questionable use of data compression and deduplication made it more resilient to situations without TRIM.

I still have 2 OCZ Vertex 2 drives in use. One I use for Windows 98 thru Windows 10. I'm still waiting for some SSD to die of something besides a defect!

When I boot Linux, I mount the windows partition with the ntfs-3g driver and then I can use fstrim to trim it.

I just assumed XP didn't like SSDs - I've tried it and it installs but just then bluescreens on reboot. Maybe I need to try a different disk?

There are two ways of doing trim. One way is to use the filesystem with the "discard" option, which sends a trim command whenever a block is deleted. This is like tidying up as you go. Unfortunately, Windows XP does not support this as it predates common usage of SSDs.

The other is to periodically do a trim of the full filesystem. This sends a list of unused blocks as the OS sees it to the drive controller, which will then discard the unused blocks. This is like tidying up the whole room after it's become messy, and this is how Linux can trim an XP drive because it does know which blocks are used and which are empty.

I've always wondered if making the partition(s) smaller than the available space on the disk keeps some blocks ready for writing?
Also, if some SSD firmware is smart enough to do its own garbage collection even without a trim aware operating system?
Personally, I just USB boot a trim aware OS for making backups and never noticed a slowdown of an XP system using an SSD.
There's BIOS mods for older Intel chipsets to have TRIM support in RAID also. Later Core2duo boards top out around 500MB/s (using 300MB/s ports) and Sandy/Ivy Bridge around 1000MB/s (600MB/s ports)
This site is an excellent resource for getting the right combination of driver and Intel RAID BIOS for optimal performance:
http://www.win-raid.com/

Looks like old versions of the Samsung Magician software are hard to find even with archive.org. Tried hard to find a verifiable source, just found some obscure french archive of old software.
4.9.7 is the last release before many features were pulled, not sure it will give you everything you want but it officially supports XP and drives up to the 850 Pro/Evo which are the fastest for XP.
4.7 was the last release before Windows 10 support was added, potentially less bloated if it has all the features you need.
Would be interested to see if TRIM can be applied through the utility under XP, I don't fancy breaking my RAID array to find out.

EDIT: also, would over-provisioning an 840/850 Pro remove the need for TRIM at all?

Technically speaking, is fretting over TRIM all that important if you’re not doing constant writing to the drives? Wouldn’t making sure that you have an aligned partition be more important for performance?

Honestly, any modern SATA SSD should work fine with WinXP. Drives with a RAM cache will perform better, but it's unclear whether that makes a different to longevity. All current model drives will do background garbage collection, and can use unwritten (unpartitioned) space for wear levelling and to maintain performance.

Just make sure to: