One of our favorite soundcard combo is certainly to pair a GUS and an SB. Unfortunately having to manage two soundcards output can bring some challenge. To daisy chain them is an obvious avenue when receiver input or an external mixer are not an option. I am wondering about the difference of using a particular order. If your intention is to defeat every mixer effects to keep the sound as original as possible, does one mixer will degrade the sound less than another ?

On my setup I have an AWE32 CT2760 and an GUS Classic 3.73 and now the GUS is plugged as line-in source of the AWE32. I though the AWE might had a better mixer for being more modern and sophisticated product. But still, it's easy to introduce clipping from it as the GUS seem to output quite loudly as it can. I was considering trying to output the AWE32 into the GUS to see if it's a more dependable mixer. But before I do I was curious to know what are your opinion about those mixers.

While writing this thread I realized pre 3.x version of the GUS did not had the ICS mixer, but the card had a mic-in & line-in phono jack 1/8. Was it like SoundBlaster 1.x that could only record from his mic-in phono jack, or was it fixed level pass-through ? I never had a pre 3.x GUS so I have no idea and I'm just curious about it.

At the moment I'm feeding the GUS Classics line output into the SoundBlasters line in and have the speakers connected to the SoundBlaster. The SB Line in volume is set so the volume from the GUS is about the same as the Sound Blaster so I don't get a surprise when switching games. I've not noticed any clipping issues so far.

I have the speakers connected to the SoundBlaster rather than the GUS only because the GUS mixer doesn't seem to work at all - the card is always at maximum volume regardless of what I do. Don't know if its buggy drivers, faulty card or games messing with the mixer settings.

Seriously, invest in one and all such troubles go away 😀

I highly recommend to connect SB to GUS (any model) Line-In and not the other way. Much less likely to have issues. Games mess with SB mixer volumes, some SB models have very low quality Line-In etc.

BTW, GUS classic rev 3.4 does not have a mixer (later has) and that makes rev 3.4 the best classic. Later is noisier.

Seriously, invest in one and all such troubles go away 😀

Second that. I have a late DOS machine with AWE64Gold and GUS. No matter which way round I hooked the things up. I had issues with levels, clipping, noise - you name it. Now have a nice Behringer mixer and no problems whatsover.

I have the speakers connected to the SoundBlaster rather than the GUS only because the GUS mixer doesn't seem to work at all - the card is always at maximum volume regardless of what I do. Don't know if its buggy drivers, faulty card or games messing with the mixer settings.

Not every GUS variant includes the ICS mixer and the mixer software will only toggle the available ports (line-in, mic, etc.) if there isn't one. If it had one, it will only decrease the volume by entering negative values, not the other way around.

I highly recommend to connect SB to GUS (any model) Line-In and not the other way. Much less likely to have issues. Games mess with SB mixer volumes, some SB models have very low quality Line-In etc.

There is one issue with this: GUS line-in tends to be disabled when it is being used by a program. It must be re-enabled afterwards by running ULTRAMIX or ULTRINIT.

Thank you all for your input, I highly appreciate that.

I did not wanted to have my initial post too long so I did not mentioned it, but as a teen I fried my hard earned GUS plugging an active bass guitar in the MIC-IN. I know it's a dumb move, but I was not aware the instrument had an pre-amp and my older passive one worked fine there. Even today that scar still itch when I put any phone jack near the input of a GUS. I'm pretty sure it was the 3.74 version, so it's not like an early version design flaw. Also as mention aitotat, SB mixer settings is often messy for unknown reason and I would not want it to send is 4x mixing output gain to the GUS, I'm afraid to think how the card might react.

Do not get me wrong, I'm also a fan of external mixer, the problem is the space. I do not want to add something that big on my desk top for something that will be overpowered for my need. I was thinking about building something that could live inside of the computer using the power from the PS unit. But searching a bit, it seem the Chinese did it already, GHXAMP NE5532. This thing seem ideal to install behind a 5-1/4 front panel. Although I'm not sure it can be considered external, so maybe Keropi wont approve ? 😄

the council of Mixerius approves
🤣 🤣 🤣

heh, i love external mixers and I'm happy to give them the room they deserve, but that's actually pretty cool and would look great behind a custom proper 5.25" enclosure 😀

So I got that small mixer and I was quite surprised by the quality of the thing for the price. The installation went well and I was glad to take a picture of it mixing and SB, GUS and SAAYM. I was glad to not have to init all card at boot all the time and I also realized how louder the GUS was compared to other card. 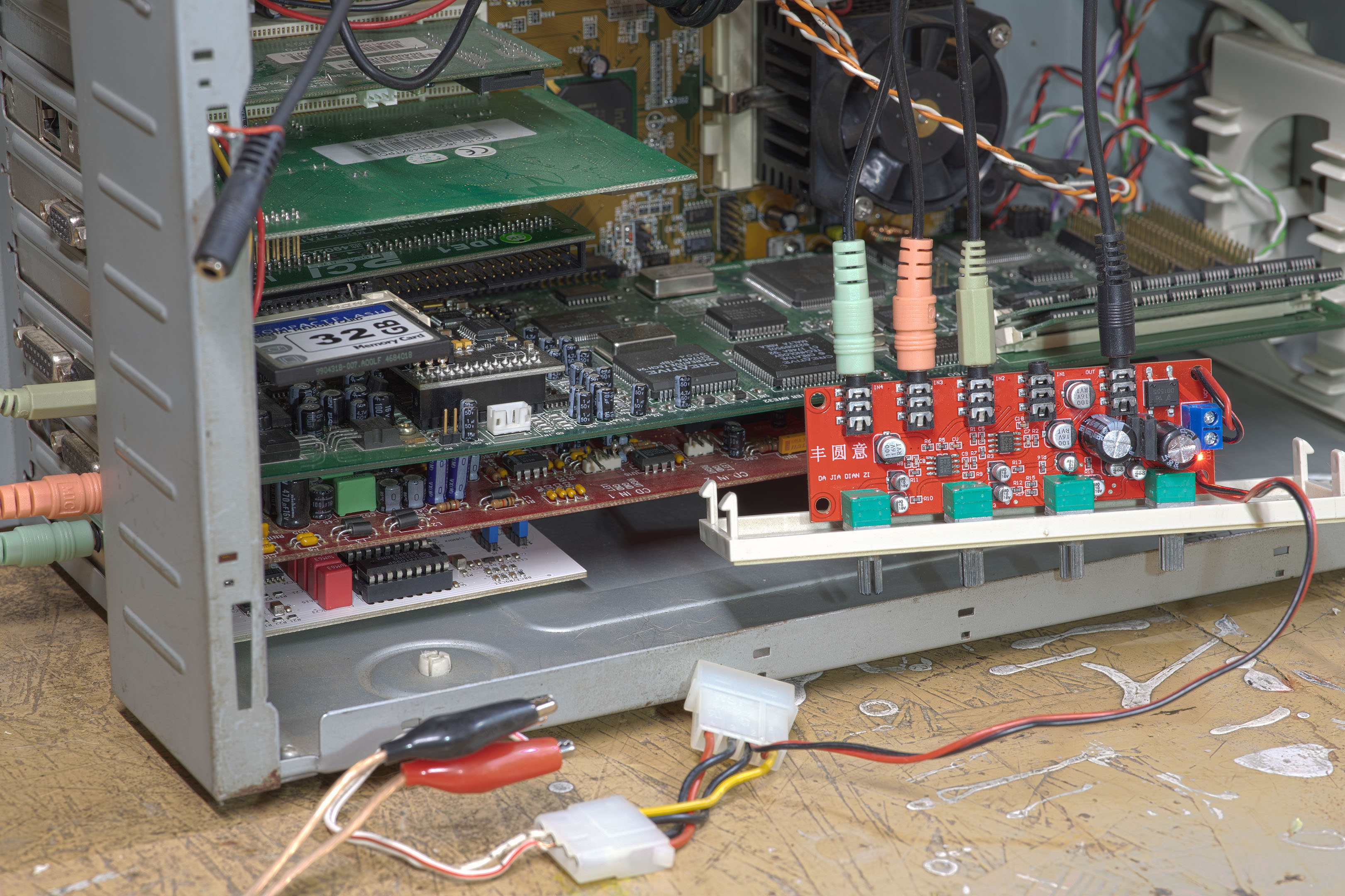 with the comment from Boohyaka I felt compeled to make a good job at installing into a 5-1/4 enclosure (although it would had fit on a 3-1/2). With some colored knob it looked actually good if, like me, you have very low aesthetic standard for your retro gear. 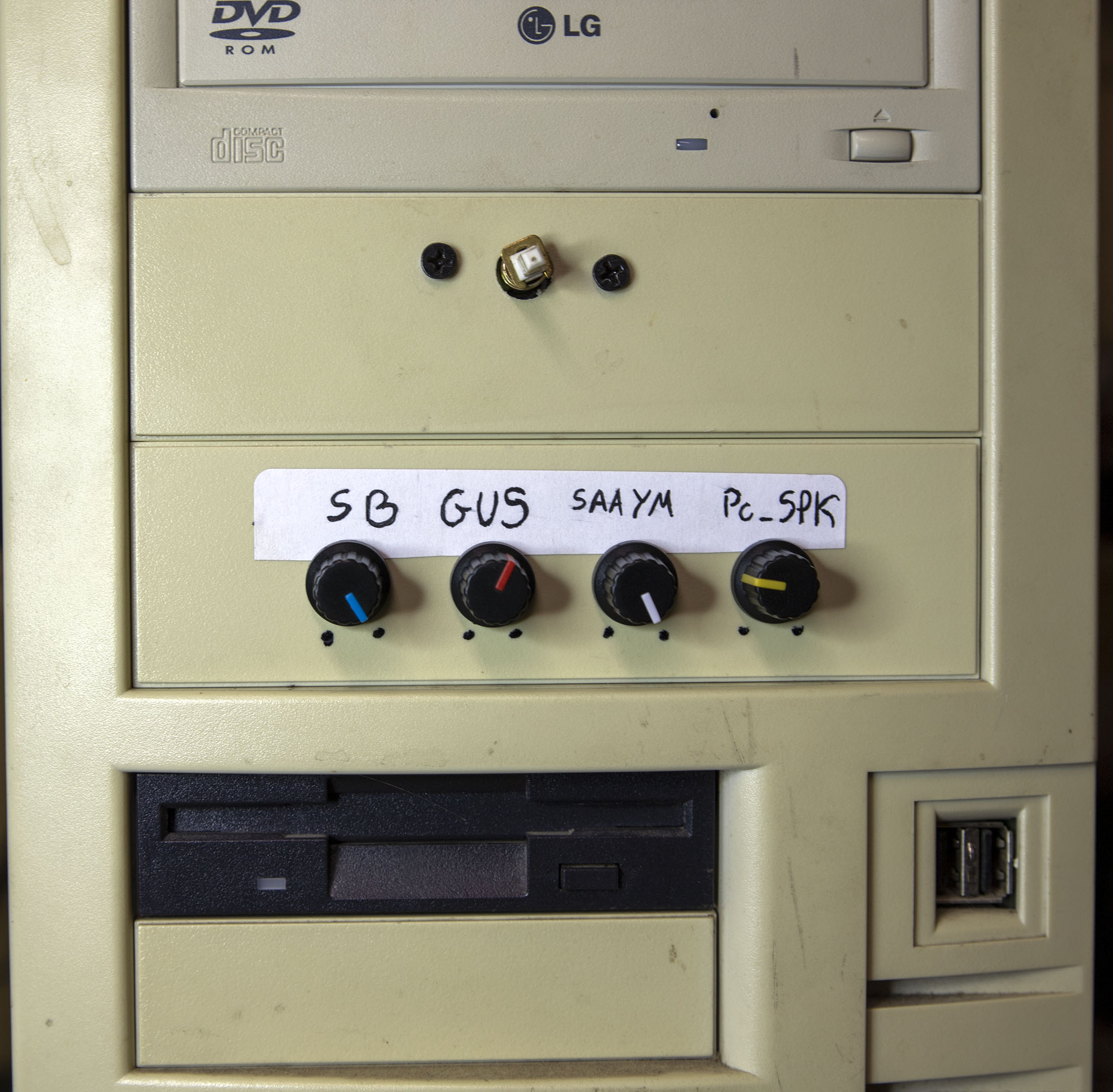 So you might notice now one know have the PC_SPK, I though it was a good idea and make my happiness complete. But like Icarus, I only flew too near of the sun. Only this time it was the sheath around the pc-speaker to mixer that melted and catch fire. I thought it was an impedance mismatch as the mixer get it's current from the same PSU as the motherboard and a simple diode would fix it. But after some investigation I see it's the bridge rectifier DB155S that seem to be the cause of the problem. Could it be that the PC Speaker crazy DC pulse drive it crazy ? As soon as I turn on the computer the wire get very hot, but the POST beep can be heard. I'm a bit puzzled as the AWE32 have a PC_SPK in that work correctly, so there must be a way to do it., maybe some soundblaster pcboard analysis would explain it. I dont intend to feed AC to this mixer so maybe I can just disable the bridge rectifier ? The mixer and all input still work, so maybe I can just disable that AC/DC bridge ? If anyone have pointer I would be very interested into hearing them (keropi I'm looking at you). 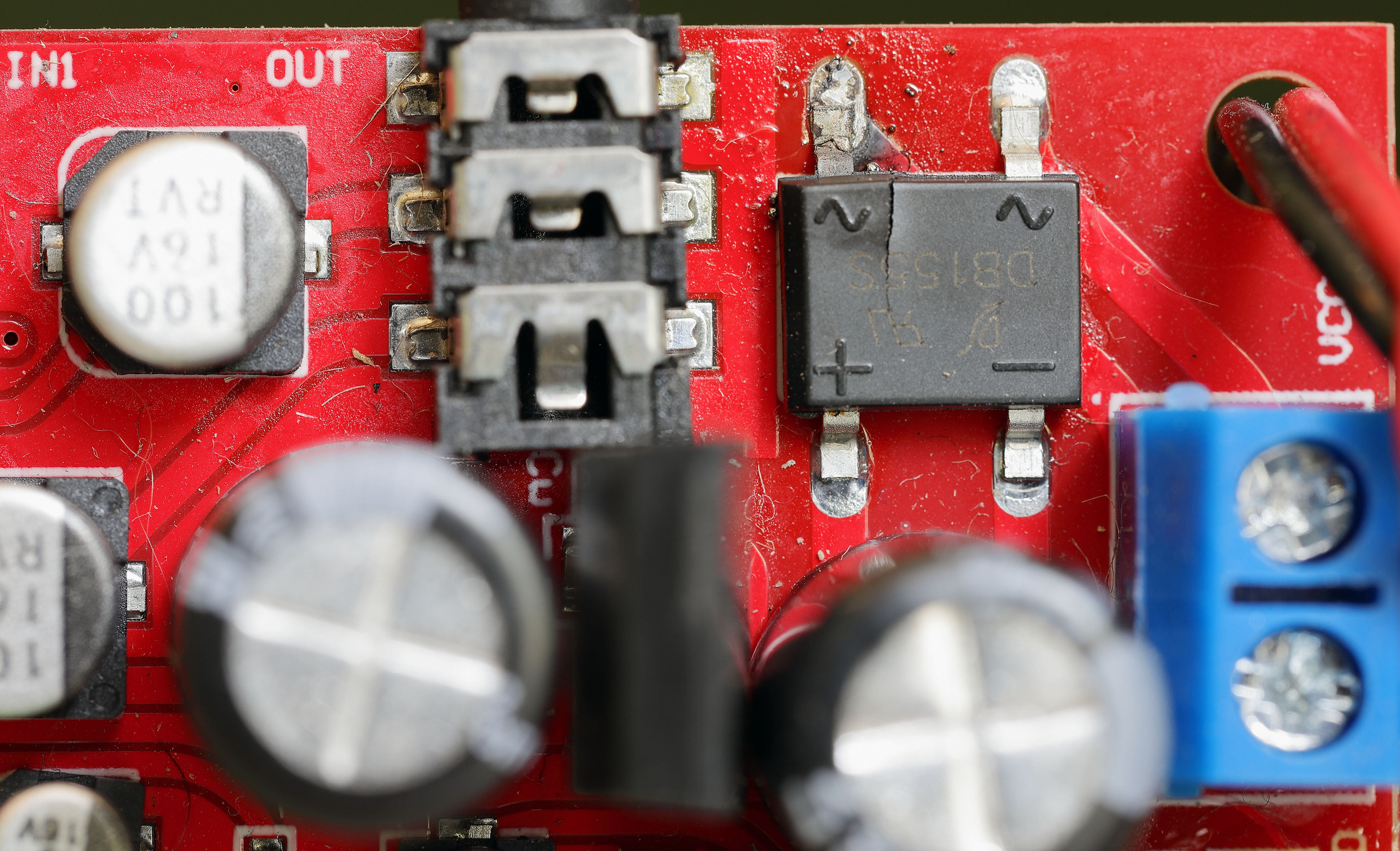 Isnt one of the PC Speaker connectors +5V and the other one a negative signal?
That would explain the exploding rectifier.

You are right about that, and I could not had been more careless on that one. Now that I think about it, I noted that thing for a project I never did, now I guess it would be a good time to do it. Hopefully it will do the trick. http://www.deinmeister.de/e_sbpcqlnk.htm.

Really the "speaker negative" pin should be connected to the audio input of the mixer (maybe via a current limiting resistor to prevent future surprises!) , and "speaker positive" shouldn't be wired to anything. As long as the mixer has a common ground with the mixer it should work without a speaker-ground connection.

You can bypass the bridge rectifier no problem, just make sure you get the polarity correct!

thanks rasteri, I'm sure your suggestion work but "deinmeister" suggested to short the + and - of the pc_spk with a 100ohm resistor. The line-in ground is skipped as I use the same power source. The differences to it's schematic is that I only had polarized caps so I put the + towards the pc_spk, and I shorted left+right on the line-in to have the pc_spk on both channel. I can now enjoy pc speaker in the mix without the annoying electrical fire 😅

I can now launch Silpheed and shut up Xacalite meaningless maunder and adjust sound FX to an enjoyable level... I'm so glad nothing wrong occurred, you can certainly understand my distress when I saw and smell that fume coming out of the computer 😱

That's a cool little mixer, and a great application for it. Nice find. Thanks also for the destructive research so others don't make the same mistake. 😁