Question is simple: Is there anyone who knows/had tested Resident Evil 1 Direct3D version on GPUs like Riva 128/128ZX, Riva TNT or maybe even one of TNT2's?
I want to run this game on native hardware without any patches, mods etc - pure plug and play/native support.

On CD box it says that game supports Canopus Total3D GPU and googling around a bit, turns out that it runs on Riva 128 GPU, so i might guess that any Riva 128 gpu's, might be supported, but what about it's newer brothers ZX/TNT/TNT2's?

Putting together Slot1 PII 233MHz retro PC, but now I'm stuck on choosing GPU for this game, cause I would like to get the better one that is support from pre GeForce nVidia cards.

Thank You and Happy Holidays! 😉

This would be quite interesting to know, for sure, as iirc RE1 for PC was only compatible with a handful of video cards...
I tried it with a TNT2 once, which resulted in a lot of problems, but this was years ago and I cannot recall the full details. I would be interested in any definitive list or any recommendations / experience report, as well.

This is what I remember about trying to get it to run:

This is the card selection from the install: 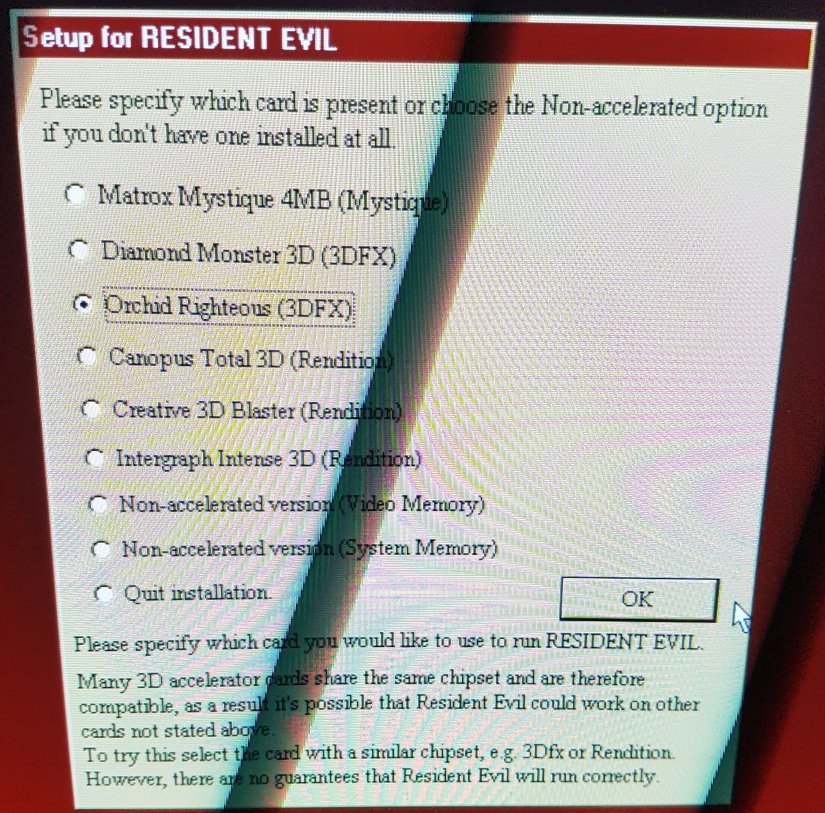 Notice the Canopus Total 3D is the original one, not the Total 3D V128 based on the Riva 128 chipset.

So, the official support is for these chipsets:

They all run using the same Direct3D renderer though (except the special PowerVR version). There is no glide support.

The game ran fine using an ATI 3D Rage Pro selecting either the Matrox Mystique or the Creative 3D Blaster as graphics card. I would assume other cards would work as well, although I have read that it does not like more than 16MB video memory.

The Voodoo 2 requires a patch (repatch) to fix some small graphical anomalies.

Desktop needs to be set to 16-bit color.

There is a 1.00c patch but it doesn't seem to help with any of the graphical stuff.

Fast CPUs creates problems,keep the CPU speed to 400 Mhz max (not tested that myself).

OK then, gonna give a shot at Riva 128 once it arrives (would order it anyway for collection purpose 😜 ) and report my success! 😉

IIRC that list is all Direct3D through and through, with different presets for the 1997-era hardware at the time. Turok did similar for its Direct3D backend

So then, I'm back with some testing results that I've done (If anyone is curious anyway 😁).
PC config atm:
CPU: Klamath P2 233MHz (stock);
MB: ASUS P3V4X;
RAM: 2x256MB Kingston 133MHz Ram;
GPU: I actually ended up getting Riva TNT (16MB version with SGRAM) instead of 128 and also I've got Voodoo 3 2000 (AGP version) - both of them were tested.
OS: Windows 98SE pretty much stock without any patches etc, besides needed things like DirectX (latest possible) etc.

Aaaaand - 1st thing that I was curious about was running it on Windows 98, because on CD, manuals and every possible place it shouts that game runs ONLY ON WINDOWS 95! 😁 (probably because game was released when there was no 98), but anyway it worked straight out of the box.
I started with Voodoo 3, because it was already in system and running - Tested all 6 3D accelerated versions and it ran on all except 3DFX ones (lol, right 😀 - 3DFX didn't run on actual 3DFX card). It starts, shows up 3DFX Interactive logo and goes to black screen, after 1 or 2 minutes game crashes with error saying that video can't be started or smthing like that. Mystique version had graphical artifacts in form of stretch lines(menus and in game), if You can call them like that, but besides that it played ok.
All Rendition versions were the same and played well without any problems.
After that I swapped card to Riva TNT and results were completely the same, but with a little bit of lower FPS, because of less horse power comparing to Voodoo 3 - although I think, that both of them are bottlenecked by CPU.
Visually identical as well texture wise, but Voodoo felt a bit brighter (higher gamma ), but I guess thats how stock Voodoo image settings play games anyway.
Performance:
*Voodoo 3 - not solid, but most of the time averages at 32FPS when running around (felt a bit like cap, but not sure, have to OC CPU a bit in future and test some more). In inventory menu and door opening scenes it actually jumps to solid ~63 FPS.
TNT - jumping all over the place from high teens to 30, didn't go higher than that even in inventory and door scenes, didn't felt so smooth and enjoyable as Voodoo, but i liked default gamma setting on it better (felt a bit darker and how it is intended to play).

Desktop needs to be set to 16-bit color.

At this point I'm curious how it would run using these GPUs with P3-S 1.4, once it arrives, but obviously it will have speedup problems. Future testing awaits! 😁