Is anyone excited for Big Navi?

With AMD not listing worldwide prices 2 days before launch, I have zero faith AMD will handle launching a new card now better than Nvidia.

DLSS on the other hand would be a pretty good card seller if a lot of games supported it, but that does need very Nvidia specific support. Question is how much of that will get handled by middleware, or how much will be up to individual game developers.

We can take a pretty well educated guess, given that after 2 entire years of Turing there ended up being less than 10 RTX games and 5 (???) DLSS games. That averages 2.5 / year. Not only that, but now the new consoles have landed BOTH with RDNA2 graphics we are going to see a huge focus (even more than previously) on console titles being ported to the PC. At the end of the previous console generation lifecycle, Turing couldn't have been better placed to mop up the PC market and Nvidia had every opportunity and all the money under the sun to persuade developers to implement DLSS. They only managed 5. Even the biggest tech tubers refused to bench Turing cards with DLSS against AMD's cards as there were so few games and so little implementation. The tech isn't in the consoles or on AMD cards. So literally 85% of global gamers do not have the ability to make use of it. Are developers gonna implement for the other 15%? How many man hours will that take? There is no profit in it. Nvidia will have to persuade them with $$$$$$ and most of them will turn it down regardless - time better spent developing their next title.

5 games in 24 months is known as a gimmick, not a feature. I'm sure the tech is sound, but it simply isn't being used and it hasn't been used. Neither was RTX in any meaningful way.

There is no middleware. Drivers do not globally implement DLSS tech into games. Nvidia seem to have fallen on their face this generation. I'm sure their Ampere cards will still massively outsell RDNA in the long term, but I doubt every developer will be rushing DLSS into their titles. Nvidia will have to front some serious money. They are gonna need to do so if they want to win early benchmarks with Navi out tomorrow and most tech tubers already have the 3 cards ready to release videos in 21 hours time.

Not that any reseller will have any stock! But I don't mind waiting. The onboard graphics on this 4790K still plays HOMM4 and Warcraft III just fine. Currently working my way through those campaigns and afterwards there is always OpenRA. If only the team would add Tiberium Sun support I probably wouldn't even need another GPU for at least 6 months!

We can take a pretty well educated guess, given that after 2 entire years of Turing there ended up being less than 10 RTX games and 5 (???) DLSS games. That averages 2.5 / year.

DLSS didn't really become meaningful until late 2019 (DLSS 2.0). So there been a year at most of meaningful DLSS pushing, and most of it at reduced productivity because of COVID. Turing cards were also very poorly received.

Even the biggest tech tubers refused to bench Turing cards with DLSS against AMD's cards as there were so few games and so little implementation.

Huh? You can't "bench" DLSS. You have to compare image quality. Which is the real reason tech tubers are not doing it; it's rather complicated.

There is no middleware.

Do you think it actually makes no difference if say, Unreal Engine implements DLSS support or not? How can you think that?

With AMD not listing worldwide prices 2 days before launch, I have zero faith AMD will handle launching a new card now better than Nvidia.

This is my concern. I think the supply issues are reasonable or at least not unexpected given the pandemic it's just how AMD handle it.

I've decided I don't have the energy to join the bumfight for a new card come launch time. All the retailer websites crashing, people having 8 tabs open for all the stores in their country and pre-purchased vouchers for a quicker Checkout, the bots and automatic purchase etc....

I've decided I don't have the energy to join the bumfight for a new card come launch time.

[sarcasm]
What are you? a socialist?

The whole point is the bumfight! How else do we proclaim the virtues of unregulated capitalism? Fighting like a dog to spend money is the cornerstone of the American way! How else do you make others feel bad by not having something you have? Enough video cards for everyone? Screw that. I want to hold my hard fought card over my friends. I want them to fall at my feet, weeping in my presence.
[/sarcasm]

but seriously, once I heard the "leak" that the cards are absolutely bonkers for cryptocurrency, I've realized 90% of the 6800's will spend their lives propping up bitcoin, us plebs who want to "game" are royally fucked.

those sarcasm tags are uncalled for, because sadly it's the truth ^^

yea... I wrote that, and quickly realized, not everyone would see it as obvious hyperbole, so i decided a bit of CYA was in order.

I'm not going to search for Techpowerup's full review but it should be noted that RTX 3080 cards undervolt extremely well. At stock settings their efficiency isn't so good.

I chuckled when I learned about Rage Mode.

Here's hoping that they eventually upgrade it to a Rage Fury MAXX Mode. 😁

I actually ended up getting one relatedly painlessly. I looked online at one shop, it was there, and I bought it with no fighting needed. Some people who had 80 tabs open for different shops and German Amazon, and pre purchased vouchers or whatever didn't get one.

What sucks big time is that the UK pricing wasn't announced before hand. I paid £680 for mine from OCUK (one of the biggest UK retailers for PC hardware). I thought this was the going rate, the conversion from dollars (plus UK tax and shipping etc). Turns out this was £80 more than the going rate for other retailers, and they knew they would sell out.

Yeah we are shafted for the RRP $1=£1 on computer hardware.
OCUK is a bit pricey but they seem to get the most of any new GPU stock so we have little choice.
Tried to get a PS5 and failed miserably, bots got them I guess.

Hope you get it soon and tell us how it performs in DX9.

Well it arrived today. I can't really think of any DX9 games that will present any issue? Mafia 2 was pretty demanding. Any specific games to test? 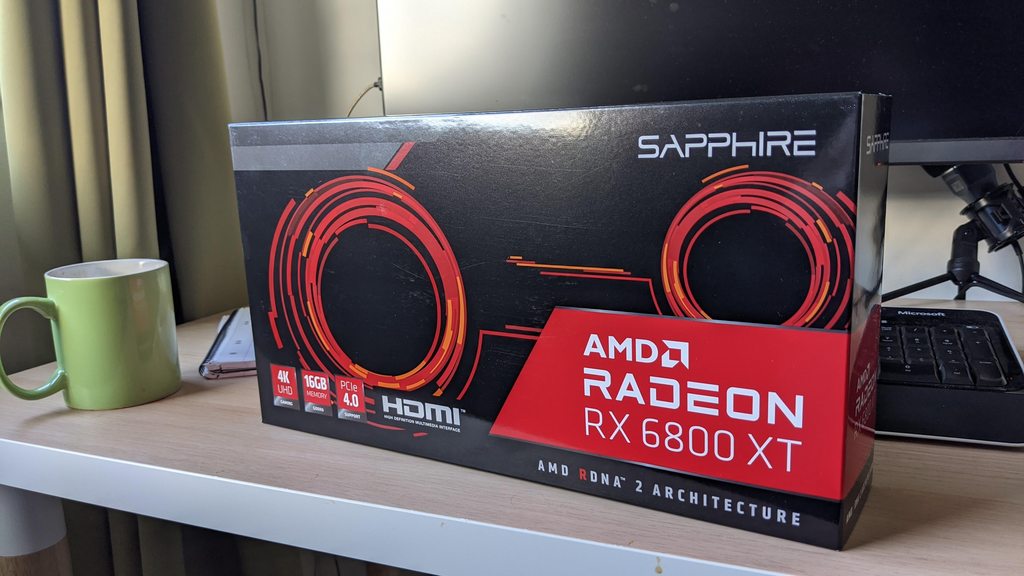 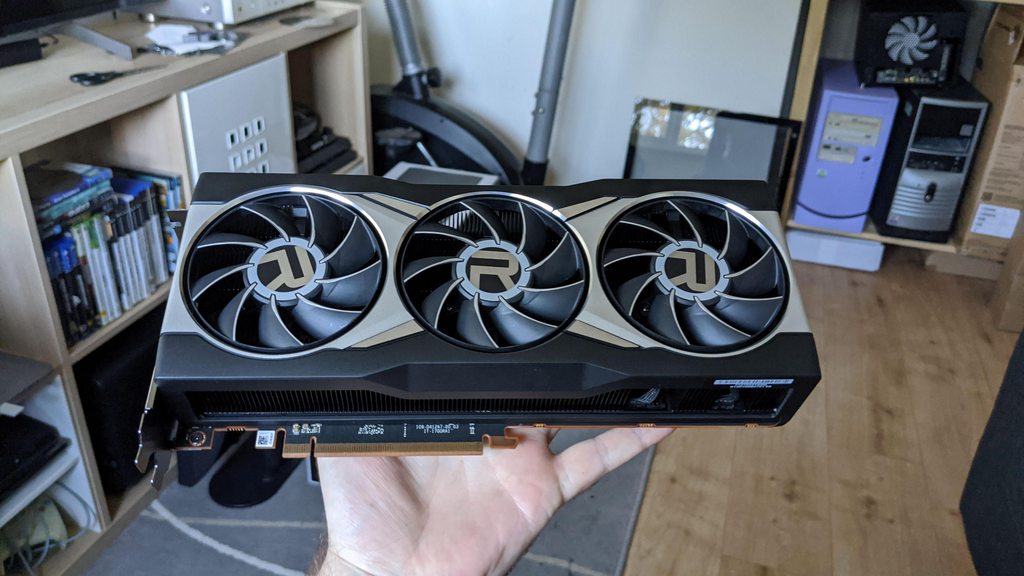 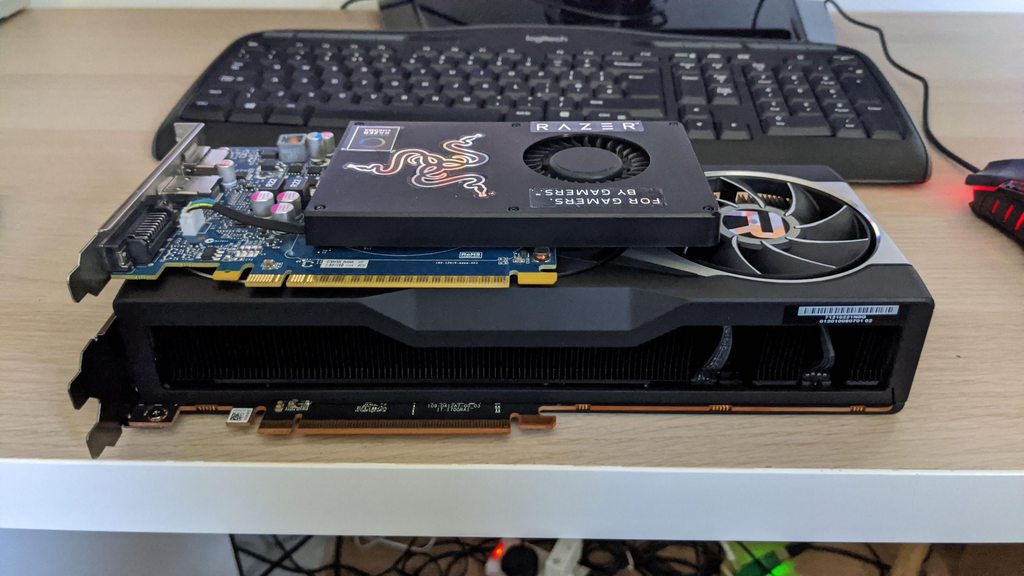 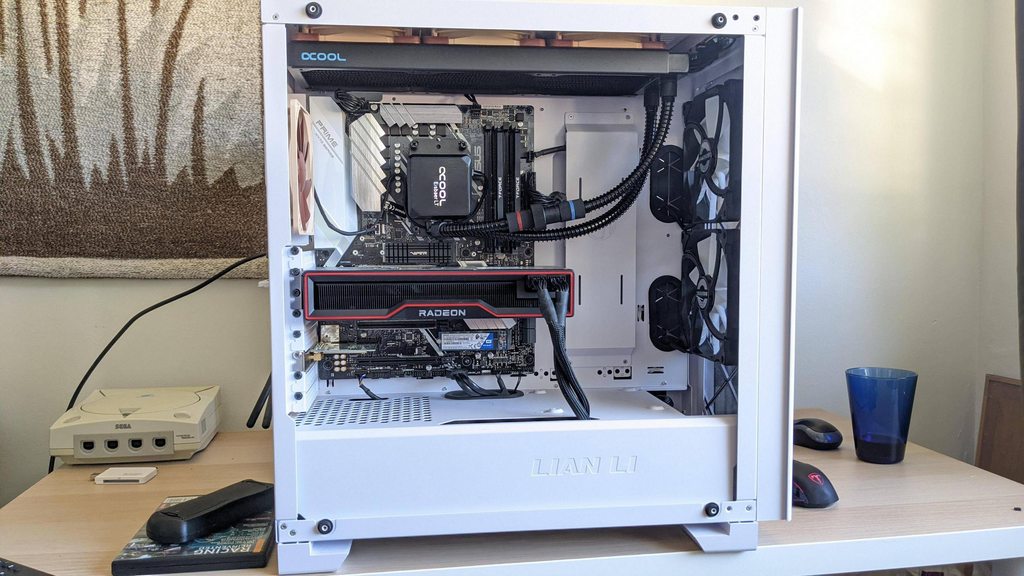 Got a big case luckily

In good ole days, you install a graphics card to your mobo. Now it seems to go the other way around.

That is a sexy card! Looks like the front grill of an 80s car when installed 😁

Well it arrived today. I can't really think of any DX9 games that will present any issue? Mafia 2 was pretty demanding. Any specific games to test?

Hmm I've not owned a Navi card to know the issues exactly but from reddit posts something DX8/9 that is a bit demanding for their time:

The issue with the RX5700s seemed to be incorrectly throttling to 2d clock speeds in some DX8/9 games.

I actually have all of those games except spell force so I'll do some tests (soon...ish)

I actually have all of those games except spell force so I'll do some tests (soon...ish)

Awesome, no rush. Looking forward to the results!

Some people mention their issues are fixed in a newer driver so they may just work perfectly.

I am just wondering how much TDP it will require...

I am just wondering how much TDP it will require...