The "oven" was figurative talk. What I meant was - took the picture right after completing the heatgun work, before cleaning things up.

I told you your temp was too high...

Heh, but i took your advise and keep temperature ~820F these days.
Something was off with the silk screen.
Top layer immediately "burned", became dark and bulged up with air bubbles forming underneath. Separated from the base.
So it became a thin crust that cracked and fell on touch.

386 motherboard: KMC-A419-8 version 1.0
It was inspected long ago, but keep forgetting to make a post about it. Doing it now.
Going by notes. 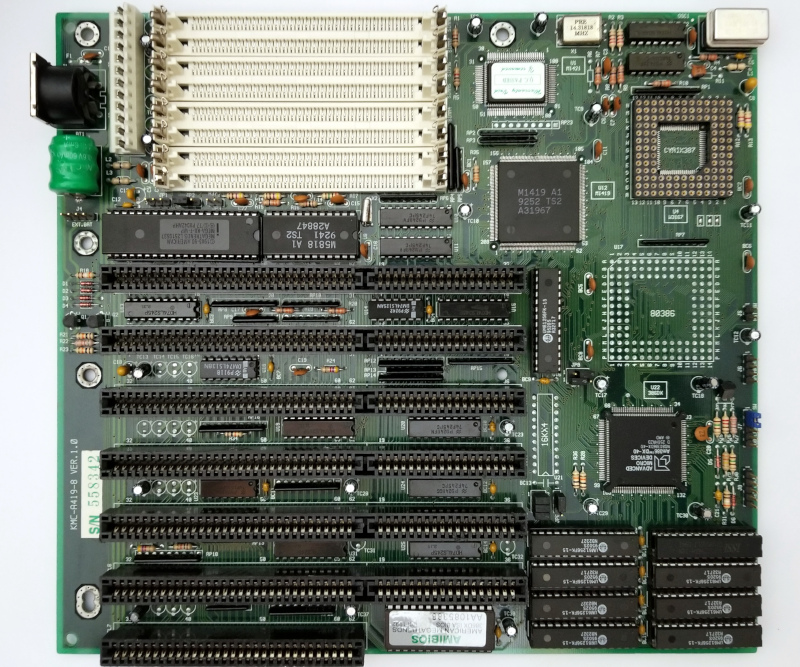 Remember checking in this post two Biostar 386 motherboards based on the same Aladin ALI-1419 A1 chipset. They were ok at best. Wanted to see if this one does better.
Soldered on board 40Mhz rated AMD 386DX CPU with pins available for PGA132 socket that can provide upgrade paths for CPU upgrades.
If performance is great with the on-board CPU - socket installation will be in order to take things to the next level with SXL ulgrade processor.

There is a placeholder for L2 cache write-back support chip which can improve performance by few %.
Again. Held on installing a socket until verify base metrics.

Fresh battery was already soldered by seller.
Easy setup - basically jumper-less.
Board works as expected at 40MHz with one exception - it really does not like CF cards.
Tried multiple different adapters and CF cards - no and no.
At the end strapped a mechanical HDD (Seagate Medalist 1205Mb) and all was good.

SpeedSys with and without FPU:

Similar to the two Biostar boards based on the same chipset performance is so-so.
While decent motherboard it does not shine with anything, so any considerations for CPU socket and WB L2 cache upgrades became uninteresting.
Also the no CF card issue with the IDE controllers makes things impractical these days.
As a result didn't proceed with any hardware upgrades. Left things the way they are.

Pentium 3 class hardware is of interest to me, especially Slot 1 and 2 stuff, so naturally built this dual Slot1 high-end workstation / gaming pc after the thorough examination of bunch of Pentium3 motherboards based on 440BX, OR8#0 and VIA chipsets. Some of that documented here, here, here, here.
The final assembly turned out really well and it probably qualifies for one of the fastest Pentium3 rigs around.

The story here is that Slot1/2 + AGP boards go up to 150MHz FSB.
Few offer that option.
Very few handle it reliably.
Especially true for dual (or more) CPU models - which is where the real fun is.
The workstation i mentioned above is built around the latest revision of Asus P2B-D, which is one of the best options out there.
It delivers impressive performance when ticking at 150MHz FSB and 2 x Tualatin-S CPUs at 1575MHz.
But there was one elusive piece of hardware that held the promise for something even better ... 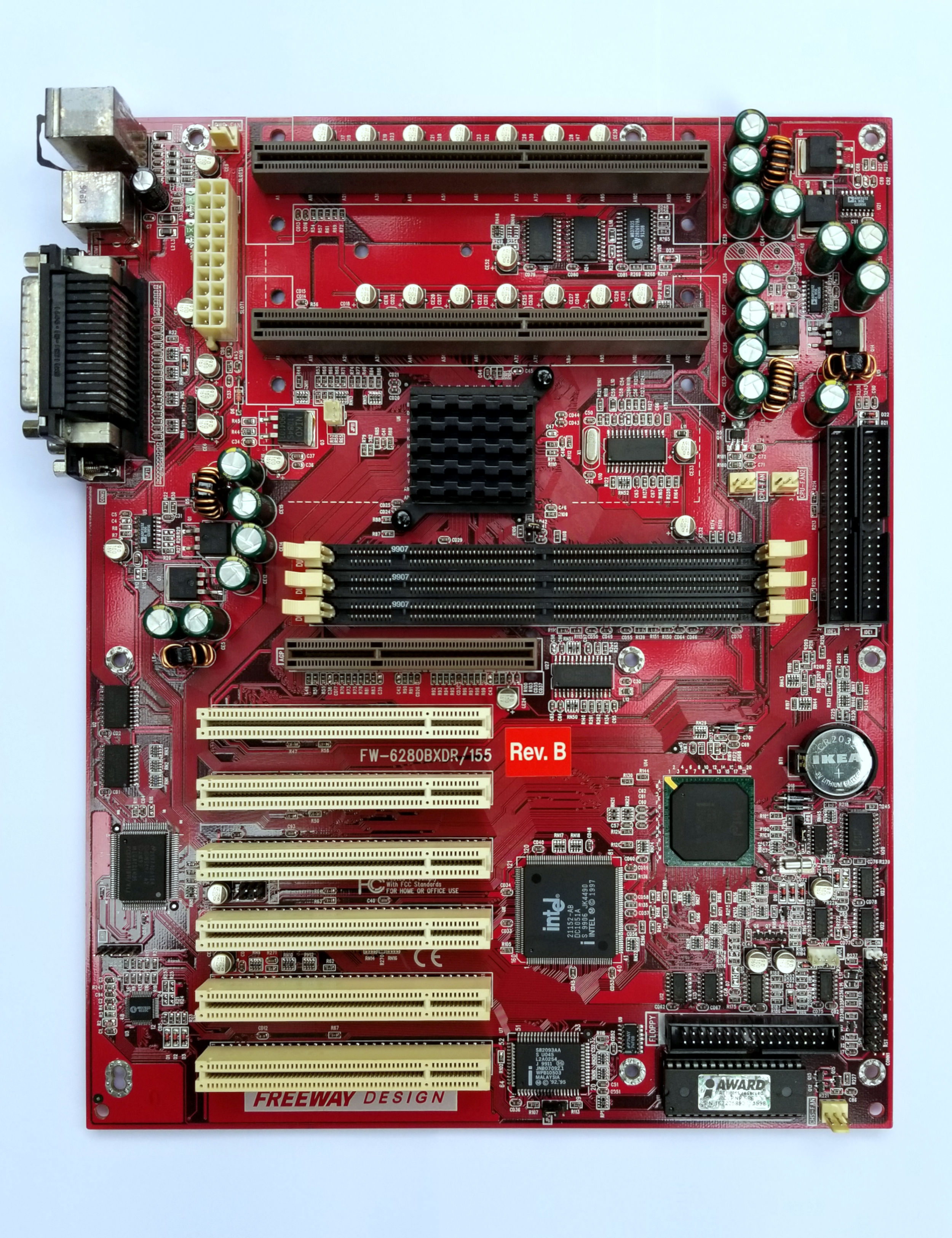 Hardware implementation is of absolutely superb quality.
Design and level of integration resembles present day motherboards - notice how sparsely populated the PCB is compared to other boards from that time.
Jumper-less. Frequencies, multipliers and everything else is controlled from within the Award BIOS - another feature ahead of its time.

Have been looking for this guy for a while and finally managed to obtain it. Price was high, but curiosity was even higher.
Seller is probably a vogon user, but not 100% sure. Anyway, back to the subject.

The board started right away with Pentium 3 Klamath @ 600MHz.
Entered the BIOS - all settings on MAX.
Series of tests - solid and fast.
Tiiiiny bit slower than Asus P2B-D.

Next up - Coppermines - 2 x 1000Mhz ones.
Now, these CPUs run at 1.7V, but the board cannot go below 1.9V.
Expected the Coppermines to be fine with it. Voltage delta is small enough.
Unfortunatelly that was not the case.
The CPU in the first slot starts to overheat and after a while will hang.
That is with standard heatsink + fan cooling.
The CPU in the second slot does not overheat and can be used long-term stably without problems.
This issue is not present with Klamath CPU models.
Bummer.
Something is off on electrical level - obviously.
Spent good amount of time trying to overcome it but without success.
BIOS version is 8. There was one more BIOS update - version 12. Nowhere to be found. Release notes suggest Win2000 related fixes. Nothing towards later CPU models.
The jumper-less design and the high-level of integration (no traceable lines) close the door for potential workarounds.
Suggestions welcome.

Decided to see at least how far can take things with single Tualatin-S CPU.

System is inherently unstable, regardless of how conservative the BIOS timings are.
NT4 is not happening.
Can run some DOS games/apps. Not very reliably. Quake 1 hangs in random places. 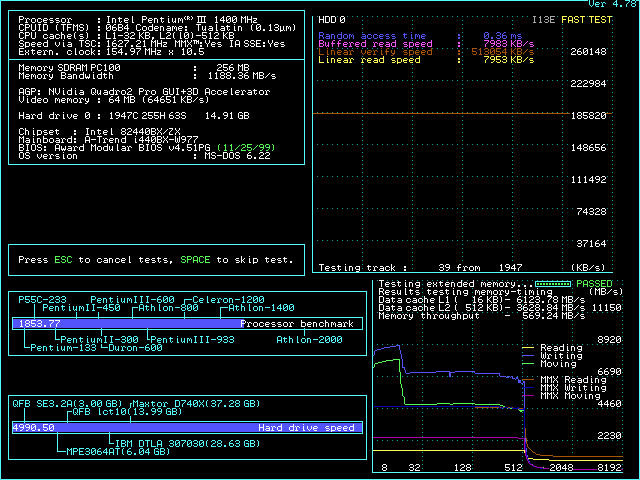 After all dual CPU related issues i was not surprised at the weak outcome. 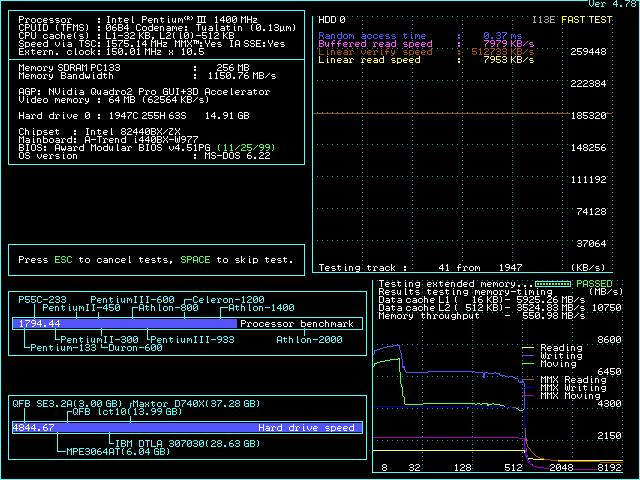 System is completely stable in DOS with all BIOS settings on max.
Nvidia drivers hang in NT4 regardless of how conservative the BIOS timings are.
Also, noticed that Quadro FX4000 does not get recognized properly - some specific hardware incompatibility with this motherboard.
At this point i started loosing interest.

Some numbers from the DOS interactive graphics test with Quadro2 Pro, for reference:

Things work well in both DOS and NT4 with all BIOS settings on max.
Didn't bother capturing performance metrics.
Again, slightly clock-to-clock slower than Asus P2B-D, so no chance of outdoing it, which was the objective of this investigation.
Moving on. Nothing to see here.

Despite the disappointment with Coppermine/Tualatin-S Pentium 3 CPUs, this motherboard is hands down one of the best options for Klamath or early Pentium 2/3 processors - great looking package, works as advertised, novel (for its time) BIOS overclocking options.

So, it looks like the latest revision of Asus P2B-D really is the highest Slot# place.

Hmm, I don't seem to be getting e-mail reminders of thread replies. I missed a lot here.

A lot of really nice dual slot 1, 440BX boards just didn't bother with coppermine support. It's a shame. Weren't there Powerleap upgrade kits which got around this?

Asus S370-DL slotkets have voltage regulators.
At the end - after posting the above - i actually made dual Tualatin-S work by feeding them 1.75V. No idea why this particular voltage did it.
Still, didn't keep the CPU in the first slot inserted for too long. The last thing i need now is fried Tualatin.
May get back to figuring this out at some point later.
The slightly lower performance compared to P2B-D, hanging nvidia drivers at high FSB frequency and the unrecognized Quadro FX4000 are enough for me to pass on the motherboard as a viable alternative to P2B-D, for now at least.

These fitted in a simple slot1 to s370 adapter from MSI and worked with my Abit VT6X4.
Powerleap Pl-ip3/t were good. The only issue i had sometimes was that i had heavy circuit for PSU and sometimes
it couldn't power well its onboard regulator and hanged the system. But that was from my setup, not from the adapter.

It is implied that these adapters are inserted between CPU and underlying socket (being this on-motherboard socket or slotket one).
I can see how it was not clear from the wording in the previous posts.
These Tualatin adapters are much better option than modifying Slotkets, to me at least, especially if purchased pre-installed with the CPU from the Korean seller.

The discussed issue was motherboard not sporting a voltage regulator or post-voltage-regulator circuitry that is required for Coppermine and Tualatin CPUs. They operate on lower voltages than Klamath.

Hm I'm not sure about the excact voltage of mine - I'm away from it now
But the slotkey was for coppermines at least.
I think once I checked the Vcore in bios and it was even above that of coppermines
(sth like 2.0V maybe, I don't remember), so I assumed this mod also
took care of the lower Vcore for Tualatins.
But maybe that was from the MSI slotkey...

Most non-Coppermine/Tualatin ready motherboards gravitate around 2V or higher vcore.
The Freeway one in particular can go down only to 1.9V.
Most Coppermine CPUs are between 1.6-1.8V, so you can still use them, given BIOS does not freak out on you, which is also rare.
But Tualatins are around 1.4-1.5V. Delta is too big and treatment is needed.

The issue with the Freeway motherboard is less about the CPUs voltage tolerance and Slotket adapters, but something specific to the board - it seems to oversupply Slot1 for some reason when Cumine or Tualatin in it. Capacitors around it get very hot in this case, but fine with Klamaths.
Unusual stuff.

I think It's this one, so it must have an onboard voltage regulator (goes down to 1.3V).
https://kentie.net/article/deskproupgrade/MS6905.PDF

It was for coppermines though, so you will also need that converter I posted above to make it work.
I think I set it at 1.45V and motherboard was supplying around 2.0V to the slotkey.

Yes, there is a voltage clamp chip on the left side of the PCB.
That's what i did too - 1.45V for the Tualatin-S.

In this post shared details about Biostar MB-8433UUD-A mod for 1024Kb L2 cache based on Feipoa's design.
Details in the link, but long story short is that things worked well for 4x40MHz - BIOS timings can be 2-1-1-1. Performance increases slightly in some tests.
For 3x60 and 3x66 the L2 cache timings had to be inflated to 3-2-2-2 which makes the system slower than 256Kb L2 cache at 2-1-1-1.
That was disappointing.

The mods are worth it for 4x40Mhz, but the objective for me is 3x60, or 3x66 MHz - basically an attempt to improve on UUD's scalability at 180/200Mhz.
Unfortunately at these higher frequencies there is something in the hardware configuration of the motherboard that causes stability issues unless wait states are inflated to a point where performance is worse than 256K at 2-1-1-1.
It may be the lack of cache buffers, but who knows really.

For most people, 2-1-1-1 with 40 MHz would be sufficient enough. But looks like they'd have to source the right cache with random testing.

It will be more interesting if 1024k can do 4x50 at 2111. It took quite a bit of trial and error to find the right combination of chips.
Can try tomorrow, since waiting on some components to arrive for repairs of some ss7 and sockets boards.
I have very few 64kx8 chips, so chances will be better with the bigger set of 128kx8 ones.
Also, I have the 1024k set that worked at 3x60 marked. It will be a good starting point.

1) When using UUD w/1024K at 160 MHz, did the presence of EDO memory improve the benchmark results at all? I see your Speedsys memory results are in the 47's, while normally this is in the 45's for FPMs. Did you have to fiddle around with different EDO modules before you found ones that worked?

4) Have you always been using EDO memory while testing the UUD? If so, perhaps this may explain the problematic selection of magic SRAM modules.