If you have Win98SE installed on that rig, it might be worth going to Start > Programs > Accessories > System Tools > System Information > Hardware Resources and checking the IRQ, DMA and I/O sections there for any conflicts. By default, my ALS100 uses A220 I5 D1 H5 P330 and also IRQ 2/9 for the MPU-401 interface. All of these can be changed in the config utility of course.

They don't work even if I boot directly into DOS and initialize the cards to use the exact same settings as I was using for my Aztech card which does work. Both Unisound and the official drivers don't work. I'm 99% sure it's a hardware issue, unfortunately. 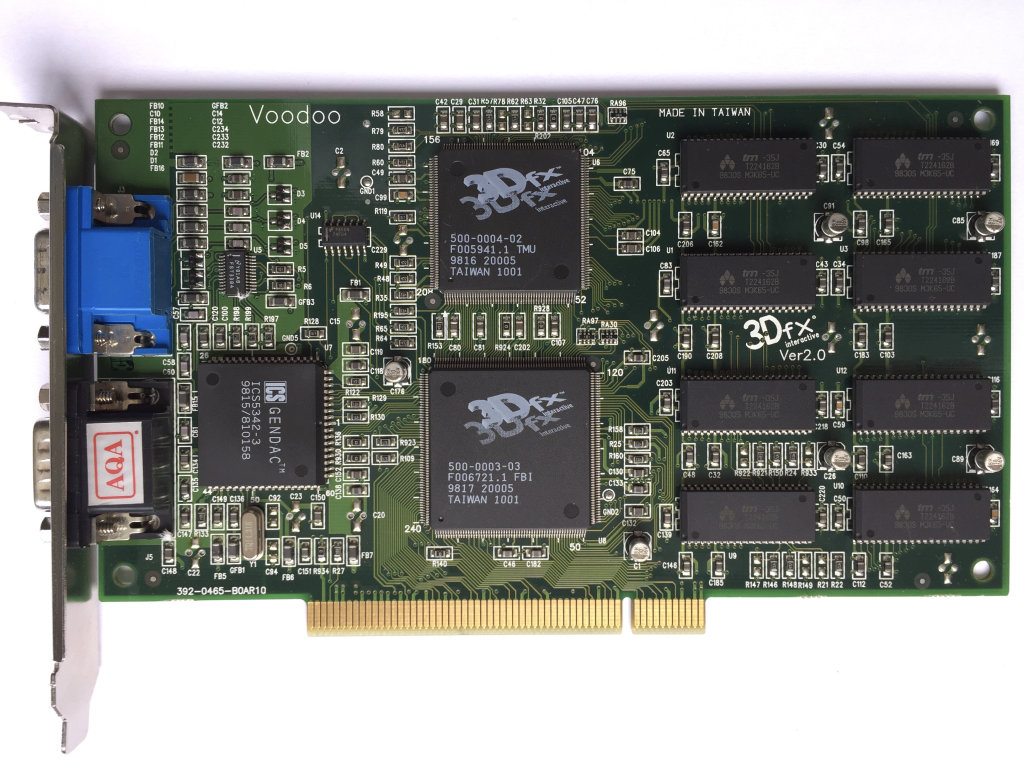 Finally got my hands on a Voodoo1! I purchased this locally, and it wasn't cheap, but I still paid far less than the asking prices on eBay. The card seems to be in pristine condition, with no signs of wear and tear. Currently testing it under DOS, and Tomb Raider runs flawlessly with a locked 30 FPS roughly 95% of the time. It should be fun comparing this to the S3D mode of the Virge.

I did notice that the brightness was a bit too high in Glide mode, but that was easily fixed by adjusting the gamma values as per these instructions by Phil. I also appreciated that you can specify the refresh rate at which Glide games run. Very useful when playing on a CRT monitor. I usually set it to 85 Hz for a flicker-free experience.

I'll do some benchmarks once I set up the card under Windows 95. I only intend to use it for the earliest Glide games since I have a Voodoo3 in my Celeron rig, which will handle anything that's more demanding.

And here are the benchmarks. I've also included software rendering, just to showcase how much of a difference a Voodoo1 can make on a system such as this. FYI, I'm using Win95 OSR 2.1 + DirectX 7.0a paired with the latest 3DFX reference driver v3.01.00 and also MiniGL v1.49 for the Quake games.

As you can see, the Voodoo1 performance in Quake 2 (1997) and Unreal (1998) is a bit lackluster. But if you consider the fact that those games are literal slideshows on this system when software rendering is used, the Voodoo does seem like magic. I have also tested a few more games using Fraps 1.20 to measure the frame rate where applicable, but they don't seem to have dedicated benchmarks, so I've decided to post a short performance summary for each of them.

Descent 2 (1996)
With the official Voodoo patch applied, Descent 2 runs very nicely on this card. I get 60+ FPS most of the time, with some dips here and there, usually when a large number of enemies are on the screen. Overall, the game feels very responsive and plays superbly.

Final Fantasy VII (1998)
This game runs very smoothly, with some minor dips while flying around the world map. Most importantly, all mini-games (e.g. G-Bike) run at the correct speeds on this system and can be completed without any problems. On my Celeron + Voodoo3 rig, those mini-games were borderline unplayable as they ran so fast that it was impossible to properly control the character.

Thief: The Dark Project (1998)
This game doesn't run too well on this system. Some of the stutter is likely caused by the slow CPU, but the framerate is still too low at 640x480. When I drop the resolution down to 512x384 the situation improves a bit, with FPS going into the 20s. Not smooth by any means, but technically still playable.

In conclusion, the Voodoo1 is fantastic for DOS Glide games. It also runs early Windows 3D accelerated titles quite well. However, I wouldn't recommend using it in demanding games made from 1998 onward, as it likely won't be able to deliver enough performance. All in all, it's great to have this piece of history in one of my rigs. The original Voodoo kickstarted the 3D revolution, and using it to play games that came out during its glory days feels very satisfying.

Tested out a few more games:

Wipeout 2097 (1997)
This game runs smoothly most of the time, with some dips when a lot of explosions are on the screen. Frame rate usually hovers between 25 and 30 FPS, depending on the race track, and the game feels very responsive overall.

Mortal Kombat 4 (1998)
I'm getting excellent performance in Glide mode here. Very good frame rates overall, with minor dips on that one stage where the rain is falling. Fights are fast and responsive. I have completed the game on the smallest tower without any performance issues.

Half-Life (1998)
Ok, this is the biggest surprise so far. Half-Life is actually playable on this system! While indoors, frame rates are in the 30s at 640x480 using the OpenGL renderer + MiniGL 1.49. Outdoors, there are some minor dips and stuttering, especially when multiple enemies are on the screen. FYI, I deliberately tested the retail version of the game, straight from the CD, without applying any patches. And I still can't believe how decently this runs on a Pentium MMX 166 with 64 MB RAM. Voodoo magic I guess?

Made a few minor changes: now using SDRAM instead of EDO RAM (still 64 MB though), and the no-name S3 VirgeDX has been replaced with a Hercules Terminator 64/Video (S3 Trio64V+).

The main reason for swapping out the S3 cards was the recently acquired Voodoo1, which now covers all of my needs for 3D accelerated gaming on this rig. Additionally, the Hercules branded Trio64V+ provides better image quality than the generic Virge. I guess brand names do matter sometimes. For reference, my original VirgeDX review can be found below:

Ok, the Hercules Terminator 64/Video is superb. I just downloaded this Hercules driver CD from August 1997. Among other things, it contains the official Win 3.11 and Win95 drivers for this card. After installing the Win 3.11 drivers, I noticed that the SETCRT utility works in pure DOS too. Basically, it does what VBEHz and S3Refresh do, but only for Hercules cards.

The truly amazing thing is, it allows this card to run DOS SVGA games at 120 Hz! Of course, provided that you have a CRT monitor capable of that. I was aware that this was possible using VBEHz and a VBE 3.0 capable graphics card (e.g. GeForce 2) but to see refresh rates this high on an lowly S3 Trio64V+ is something else entirely!

Anyhow, this works under Windows 95 too, and the installation is much simpler there. Just open up the "Hercules Touch 95" application and select your preferred resolution and refresh rate.

I recently got a Chicony 5311 from my local classifieds. It's one of those run-off-the-mill AT keyboards that were commonly sold with "value" systems during the mid '90s. However, it's kind of special to me, since this was the exact model that came with my very first PC.

After carefully disassembling the keyboard and taking out the electronic components, I gave it a thorough wash. To be extra safe, I let it dry for a whole day before putting everything back together. Now, it's squeaky clean and feels very nice to use.

On a side note, I actually like that it doesn't come with Windows keys, since I sometimes end up pressing those by accident while gaming under Win95. The absence of a large backspace key is somewhat irksome though.

I'd suggest using the MiniGL v1.46 for a Pentium MMX computer with that Voodoo card as later ones are slightly slower on that CPU and contains optimizations for AMD CPUs with 3DNow! instructions.

I'd suggest using the MiniGL v1.46 for a Pentium MMX computer with that Voodoo card as later ones are slightly slower on that CPU and contains optimizations for AMD CPUs with 3DNow! instructions.

I tried that version back when I did the tests (as well as a few even older ones) but I could not measure any performance increase compared to v1.49.

Got a NOS Philips 40x CD-ROM drive since my old one was experiencing some problems when reading certain discs.

The new drive reads all of my CDs without any issues, but it behaves oddly when used with slowdown utilities. On pure data discs such as Command & Conquer, the slowdown speed is accepted and works correctly. But on mixed mode (CD audio + data) discs such as Tomb Raider, the slowdown speed gets reset as soon as the game plays a CD audio track. For example, the drive is perfectly quiet while loading the Tomb Raider intro movie, but after the main menu song plays (CD audio), all subsequent movies load at full 40x speed. I tried multiple slowdown utilities and it always behaves this way. I'm guessing it's a firmware issue.

On an unrelated side note, the drive shipped with a diskette which contains UDMA drivers for DOS. I wasn't even aware that such a thing existed. I installed them briefly out of curiosity, but reverted back after noticing that they take up 40 KB of conventional memory.

Got a NOS Philips 40x CD-ROM drive since my old one was experiencing some problems when reading certain discs.

I'm guessing it's a firmware issue.

.. ah, yeah i think you guessed it right, there is some routine 'resetting' between data types perhaps

anyway, you still have a nice new CD ROM there. a good quality drive at 40 should be ok most of the time, i do remember some of the cheaper ones at x52 or x56 sounding like they were about to take off towards the end of the CD era!

anyway, you still have a nice new CD ROM there. a good quality drive at 40 should be ok most of the time, i do remember some of the cheaper ones at x52 or x56 sounding like they were about to take off towards the end of the CD era!

My old LG and Hitachi drives both cause short pauses/freezes when changing from one track to the next. Then there's my MSI DVD-ROM which doesn't cause any freezes but somehow spins too fast (becoming overly noisy) while playing CD audio. Lastly, my Lite-On DVD-ROM has none of those issues but it produces some weird "chirping" sounds whenever CD audio is playing.

On the other hand, this Philips drive plays CD audio tracks flawlessly. It also seems to be among the quieter ones, even at 40x speed. If not for that firmware problem, it would have been perfect.