I think that is a HIS card, I have this card and it was a bit difficult to take of the heatsink. If it is a HIS card then it should be clocked at 110MHz and 125MHz for chip/memory respectively. At that speed Savage4 can work without heatsink (like Diamond S520, s530) For safety little fan can do the work 😀

Anyway, on my way home I bought some thermal adhesive so I'll reattach the heatsink. 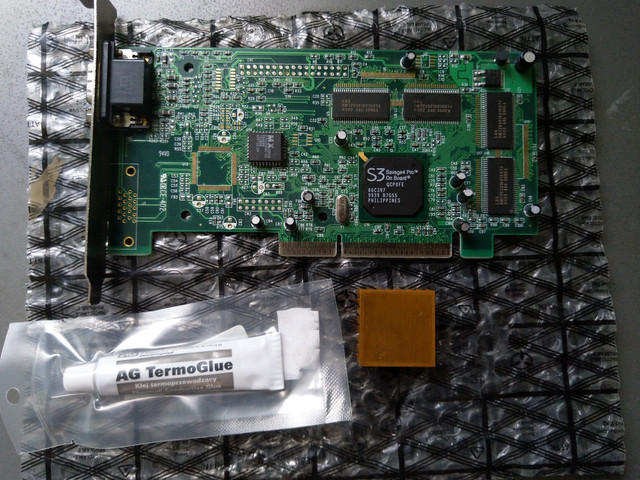 I've always thought that only "Pro" chip can have 32MB memory, LT is up to 8MB and GT up to 16MB. Can you please share links for these cards you mentioned or some photos?

They are pretty boring looking cards. Just like any Trio3D would look with a heatsink. But after looking up what they are, it seems Savage4 Xtreme. And they are both still below $1 on auction. I'll probably give into the temptation and just try my luck.

Bought an AMD build at a flea market today. That's one way to fix a cooler. 😁

I've seen similar before. It's really fun to see the stuff people come up with.

I did something similar once when I broke the heatsink bracket on my s478 motherboard. Only with rubber bands.

Ordered this PCI Video Card yesterday.
This is an 8MB ATI Rage XL PCI.
Costing less than $ 10, it will probably arrive next month.
I will use it on a socket 7, probably in a TX or VX, or in a VIA VPX.
I think 8MB can be better than the cards I use alone 2MB.

That's exactly why I used to buy Rage Pro LT, only the boards were with SiS chipsets (PC Chips M590 and Asus P/I P55SP4) and unfortunately, no picture. The card itself is functional, it works without problems on other boards with other chipsets, but there is usually an AGP port and therefore more suitable options.

Arrived yesterday my first 3dfx need recap and fix , but for 20 euro ..

I was contemplating the 4 hour round trip drive to buy one or both of these cases, but when I clicked again, both posts had been deleted. Just as well.

Well, there is not much to say..

And a basis for my "higher-end" pentium 2 class machine. 15€
A ChainTech 6ESA2 motherboard, which has ISA, PCI and AGP slots and has integrated ESS Solo-1 sound card.
I didn't know it before i got it, but it also had one of the most desirable Slot1 celeron - Celeron 300A. Definitely will try to overclock it.

Now got a similar kind of "hassle-free" pentium 3 (Socket PGA370) class motherboard - Chaintech 6AIA2. Also has all the requirements ticked i have:
mATX
Good DOS compatible integrated sound card (Again, ESS Solo-1)
AGP, PCI and ISA all present on the board.
Cost me under 10€ shipped.

Won these 2 motherboards on ebay nice and cheap. Interested mostly in the highly integrated S7 board that I have IDed as this: http://www.win3x.org/uh19/motherboard/show/8103
Should make an outstanding DOS machine in a nice small MATX case... as long as it works.
The other one just seems like a basic P4.

I also got a £5 mystery box from FB market which, while still worth more than £5. Isnt all that exciting. (1.05ghz athlon, built in vga, sound)

Both are pics from the sellers.

That's exactly why I used to buy Rage Pro LT, only the boards were with SiS chipsets (PC Chips M590 and Asus P/I P55SP4) and unfortunately, no picture. The card itself is functional, it works without problems on other boards with other chipsets, but there is usually an AGP port and therefore more suitable options.

As a similar VGA to yours, I have a pair of 4MB ATI 3D RAGE II PCI.
I had put one away some time ago because it had problems, but reviewing it in the past few days, maybe I would have an idea of ​​what caused the problem.
They could be polarized capacitors (tantalum), I need to check them and replace them (as soon as possible).
The card is an ASUS 3DP-V264GT2 / TV, if I can fix it it should be fine in an iVX iTX, or VIA VPX PC.
Regarding SiS (chipset), I don't have S.7 cards with this chipset, but I remember they proposed one in the late 90's, it was not suitable for my needs, and it was not supported by the Hauppauge Win-TV card (it required Intel chipset ).

I also got a £5 mystery box from FB market which, while still worth more than £5. Isnt all that exciting. (1.05ghz athlon, built in vga, sound)

Or a malfunction. Markings on the caps means that someone already tried to fix it.