This came with surprise CPU that turned out to be a surprise... Thunderbird 1400.
Nice! Especially since I have one of those since 20 years, only that I cooked it some day...
IIRC, that bugger is unlocked by nature. It readily OCed via multiplier setting in the award bios.

But while keeping my eyes open, i found that someone's selling a motherboard, that is not compaq motherboard, but has all the ports, screw holes and even riser slot exactly the same as the compaq. So i got it for 10€ and i hope that will be a "backup solution" if i don't get the original motherboard working.

It would actually be even an upgrade - it has cache (which compaq does not have) and slowest CPU i can provide there is dx2-50, which is double the "megaherzes"! 😁

So it's an Acer Acermate A1G, right? My guess is Acer produced those boards for Compaq and also offered their own systems with it.

Thanks! I didn't start identifying it before i got it to at my hands.

There are few candidates, when i started off from your suggestion.
A1G - all looks good, except the video memory is different/not socketed and there is no on-board ram. (pads are there)
A1G4 - based on the component image on UT, it is identical, except the jumpers between cache and tag chip are wrong way around. (Mine seems to be like A1G)
A1GL - Same story as A1G4

There is A1G+, which doesn't have any picture material. Maybe that will be a perfect match. Once i receive the board, i'll try to identify it properly.

Thanks for the suggestion and helping me to get on track with this board!

Of note that they included what seems to be a 4 pin 12v plug. Don't think I've seen many pre-nForce 2 mobos sport that.

Of note that they included what seems to be a 4 pin 12v plug. Don't think I've seen many pre-nForce 2 mobos sport that.

Uhm, now that you mention it? I did not notice that one when I just tested it with some random FX5200.
But I'd have very much assumed it is.
Yet, call my crazy, I had a look at the manual.
Turn's out, it's not. It's supposed to be a hook up to the graphics card. Apparently, that was a thing?
(I'm intending to use the board with an ELSA Gloria II pro (Quadro-gf256 DDR) with AGP pro, that does not have one of those.)
It matches the usual p4 plug in shape and voltage and I'd assume it would not hurt the board to attach one, but if I'm understanding this correctly, the juice is supposed to go out there and to the card?

That MSI board seems to have all kinds of weird shit.
Like, some strange USB based p2p connection instead of LAN? TF?

No, but they are sold in their stores. You can find them everywhere, at least here in Germany. They slap their name on thousands of products to distribute, mostly overpriced basic stuff of low to medium quality, at least in my experience.They just don't feel like a real name brand.

OK... I think IDE to SATA adapters should be enough for me for the next few years... 😄

The one KT266 motherboard I ever dealt with was a Shuttle AK32, and it had a similar northbridge heatsink; it was in an old case with poor ventilation, and the heat caused the double sided tape holding it on the northbridge to loosen up, and it began to slide off. The cure was a standard northbridge heatsink held in place with plastic pushpins in the (thankfully) preexisting holes.

"A lot of times when you first start out on a project you think, This is never going to be finished. But then it is, and you think, Wow, it wasn't even worth it." - Jack Handey

And yes these chips are indeed easy to cook 😒

I've acquired a Voodoo3 1000. I can't believe these things were sold with no heatsinks. Even at stock, I couldn't touch the core for more than a fraction of a fraction of a millisecond. I applied a smallish heatsink and pointed a smallish fan at the chip and it overclocked stable at 157.5MHz through various benchmarks 3DMark 1999, etc. at 800x600x16. 26% increase. The RAM was always cool to the touch. Once I pulled the fan away and locked it up in a case, 157.5MHz wouldn't hold. I should be able to get more than Voodoo3 3000 speeds with proper cooling; the RAM certainly won't be the limiting factor at 5.5ns. I'll get to that sometime in the future.

And yes these chips are indeed easy to cook 😒

I actually bought that one for cheap and used, in 2002 or 3 to upgrade from a prized TB 700 that I had bought with some silly dotcom startup job money back when that was cool.
Mainly because 700 @ 1000 felt sub standard by then and the obnoxious nerd in me refused to buy a CPU that bore the name of a Microsoft OS, if not officially.

"Easy to cook", well, it depends.
Just don't ever move them anywhere near a power supply without a heat sink attached.
Mere negligence can mean to accidentally hook up a "live" PSU that for some freak reason turns on before you attach the heat sink, e.g.

But, I'm still ashamed to admit, I cooked it by ignorance rather than negligence. Back then, think I wanted to check whether a certain board does POST at all or something like that.
And, I assumed it would be ok to power it up for a mere second up to the VGA bios screen.
Turns out, it's not ok. Not at all.

What can I say? I was young and reckless. Also, to my defense, the chip was retired and just had entered "obsolescence purgatory". So I did not care too much. But it was the last of the CPGA Mohicans, even back then. I should have known better! 🙁

I have the same cpu.
I got it from my uncle, as he moved to a P4 like 6 months after he bought it (when it had already been out for some time).
It was set to 100mhz fsb and the h/s was mounted backwards, hence it wasn't making a 100% contact on the die surface.
Didn't die and as I noticed the issue I reapplied thermal paste and mounted the h/s correctly.

As for the "it will POST".
When I tested Athlons, if the h/s wasn't mounted or have the adequate pressure on, no post.
Temp does spike fast on those. Happy they went back to IHS.

Probably this is exactly why they were sold bare.

It does not appear a heatsink was ever applied; nor have I ever seen a Voodoo3 1000 with a heatsink attached from the factory (which doesn't mean they don't exist, of course, it just means I haven't seen one).

That poor sound card. They butchered that poor thing for a few cents in gold.

Wow, that's a greedy bastard who did that to a Sound Blaster 2.0 card. 😳

Well I guess you can salvage the chips at least.

Ages ago I received a picture of a trashcan full of ISA, VLB, EISA, etc cards with the gold fingers cut off by a scrapper. No idea if I still have it somehwere but it was depressing back then and that was before the cards were worth money like today.

Snagged this big boy locally, a Dell P1110 21" CRT. I believe it's a Dell branded Sony G500. It needs G2 voltage adjusted because it has the runaway brightness issue, but that shouldn't be a problem. These can be fine tuned with WinDAS, so a little time and massaging the settings and should be a great monitor! 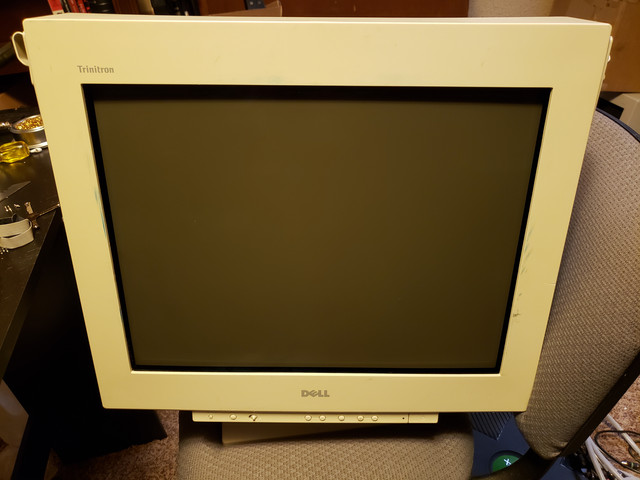 I also own one of these they do not have a heatsink. You can use a thermal adhesive tape and 40mm chipset heatsink on top and they will run fine at stock speeds, even at 2000 speeds.