ATM, I have absolutely no wire to continue with my testing. But I have managed to set up a temporary connection between pins BF0 and BF1. I got a shard of staple, and sellotaped it to the two pins. Not on the surface side of the CPU, but on the pins side of the CPU. The shard of staple is thin enough to allow the CPU to sit inside the CPU socket holes OK. I set the mobo's multi to 4x, hoping that the POST screen will display 266 MHz, but it does not. Instead, it displays 166 MHz. That's curious. In my earlier failed test above, the POST screen displayed 133 MHz.

Oh OK! I'll give it a go. Now to find my bottle of cleaner.. And rescue my "lucky" CPU from the recycle rubbish box.

It's a good job we've got people like you "patrolling" this board to offer great advice. I cleaned up the CPU, and it works great. Thanks a lot. 😀

Unfortunately, I think I need a bit more juice for the voltage IO. If I run Doom, it freezes with a corrupted display. I think 3.5V is by far enough for the CPU, but I think the IO needs a bit more than 3.5V. My board won't exceed that value, but I'm sure other super socket 7 boards allow a greater value to be set for the VIO. I remember testing an MSI SS7 board (MSI MS5169), and I think I set its VIO to 3.8 once, for some silly OC'ing tests.

I tried to hard wire a higher multiplier (4x) with my Abit 430TX and aP200mmx, and it did absolutely nothing. Even tried it on multiple brand socket 7 boards. 🙁

bushwack, a thought just crossed my mind. When you attempted this special overclock, did you look at the BIOS POST screen, and see that the CPU speed had not changed (was not overclocked), and then stop your testing? Or, in other words, did you (like me) not go to Windows and run a benchmark utility (eg Sandra, CPU-z, etc) to check the speed of the CPU? I wonder if the BIOS POST screen was, for whatever odd reason, not correctly displaying the updated/overclocked CPU speed value?

I've been overclocking a SS7 board (topic here) to a slightly odd FSB value of 105, and the CPU speed is now 315 MHz (from 233 MHz), but this 315 value is not displayed correctly on the BIOS POST screen. Instead, the screen says 300 MHz. It's interesting, because on one of my "special overclocking" tests mentioned somewhere above in this thread, it did appear to change the CPU clock speed, but not to the anticipated overclock CPU speed value, and so I thought the overclock test had failed. Maybe it hadn't failed. Maybe the BIOS POST screen was just incorrectly displaying the CPU speed value, but in real terms, the CPU was running at a higher speed?

Tetrium, have your MMX CPUs arrived yet? If you try some overclocking experiments on them, for example this "elusive" multi mod experiment, it may be worth ignoring what the BIOS POST display says, in terms of the CPU speed. If you go to Windows, and run a CPU speed utility (eg Sandra, CPU-z, etc), it may show that the CPU is running at a different speed (greater) to what the BIOS POST display says.

They just came in an hour ago, all 9 of them!

I'll have to make a new setup as I've been busy in my house lately, haven't spend any time with my hardware the last couple months and had started using my attic to store stuff, I can barely walk there now!
When I have time (hopefully tomorrow, next weekend probably no time due to lan party) I'll first test all my mmx 233's in a single go, then try the wire trick with a piece of wire I'll remove from an old electrical wire or from one of those thingies you use to tie up garbage bags! 😜

Edit:There any tool that will read cpu speeds from a boot flop? I rather not do some wire modding on a good working motherboard 😜

Seems like you guys are having good fun overclocking this one. 😀

I remember P55C cpus were not the best overclockers. Always had better results with non MMXs. Take a look below. (82% and 86% overclocks)

I think i'll try to squeeze an MMX just for fun and hope it doesn't catch on fire. 😉 Yesterday I decided to play a little with a motherboard I found at the basement, which I thought was dead. To my surprise it worked. It is an ECS P5TX-BPRO, on AT form. It has Intel 430TX chipset. I liked the fact that besides the 4 simm sockets, it also has 2 dimm sockets, and works successfully even with 2 128mb dimms. But I decided to put 2 x 64mb pc100 sticks, as it is ok with 128mb ram. Now, the interesting part. Not only it supports my 233 mmx cpus, but I was able to overclock them successfully and very stable. The fsb is limited at 83MHz, so it runs at 292MHz, but after increasing the voltage to 2.9-3.2, it runs perfect. I've been able to load win98se with no problems at all(in just 14" - thanks to the CF card), and quake 1 played great using my S3 virge diamond stealth. At the moment, I like it very much, and I'm seriously thinking to use this as my main pentium pc. I've got the ps/2 mouse and usb ports to work. And the best part. If you keep the voltage stable (2.9v) then the only thing you have to change in order to use 83MHz fsb instead of 66, is a jumber, which needs to be moved on pin to the right. Which is very useful, if the board is placed in a case with a 3 wire turbo button. Using that it could be possible to select between normal -233MHz and turbo -292! The strange thing is that even though it runs at 292MHz, when it posts, it says 266MHz, but it's ok.
Here is speedsys image :

And on 3dbench I got 205 fps, while in normal settings(233MHz) it scored 165fps.
I think it's rather good! What amazes me most, is how stable the system is. I also have to mention that I'm using a nice socket 370 heatsink/fan, which is the same size as the socket 7, and about 5-6cm tall, and can be installed perfectly on that board. After running windows and quake for about 40-50 minutes, I touched the heatsink and it wasn't hot at all...
I think it is going to be perfect to use with a voodoo 1 card.

Frankly, I'm not really an overclocking guru or anything.
It's more like "What if Intel decided to continue making Pentium 1's for Socket 7 after they went to Slot 1?".
They did continue for a while to make the mmx chips, but purposefully max its multi at 3.5x.

Of course theres the Tillamook but that one's a bit different.

I agree, 5u3. Voodoo 5 is more GPU than any Socket 7 CPU needs and it works great with the platform's AGP problems.

How about a V5 PCI? Shouldn't be any problems there, right? The AGP V5 is basically just a PCI card running at 66mhz anyway. In practice, the PCI card isn't noticeably slower.

Some were actually.
I tested this myself and many of the newer 166mmx and 200mmx have their higher multipliers disabled.
The "semi-locked" 166mmx would, for instance, only recognize 2x and 2.5x. The other settings were ignored, as in one of the 2 multiplier jumpers on the motherboard did nothing.

Intel locked the higher multipliers on some of the slower models, starting with the Pentium 133. There used to be a table of these on the net somewhere, but I can't find it right now...

I can't find it either but even with the guide, theres still no guarantee any particular chip you have is locked or not.
Best and easiest way to find out would be to simply try. Or just get a 233 one, they are dirt cheap these days anyway.

I used to have a Packard Bell P-150 box that I ran at 200mhz for a long time. The 150 and 166mhz chips were identical. Intel just labeled some 150 for use on 60mhz motherboards. Since 166mhz Pentiums will easily do 200mhz and the P150 is just a P166 with different writing on top, it didn't take me long to figure out that 200mhz would be a cinch with this chip. That was probably the best overclock I ever did to a CPU percentage wise. 50mhz is 33% of 150. Try getting a 33% overclock out of a modern CPU without spending a lot of money on exotic cooling. 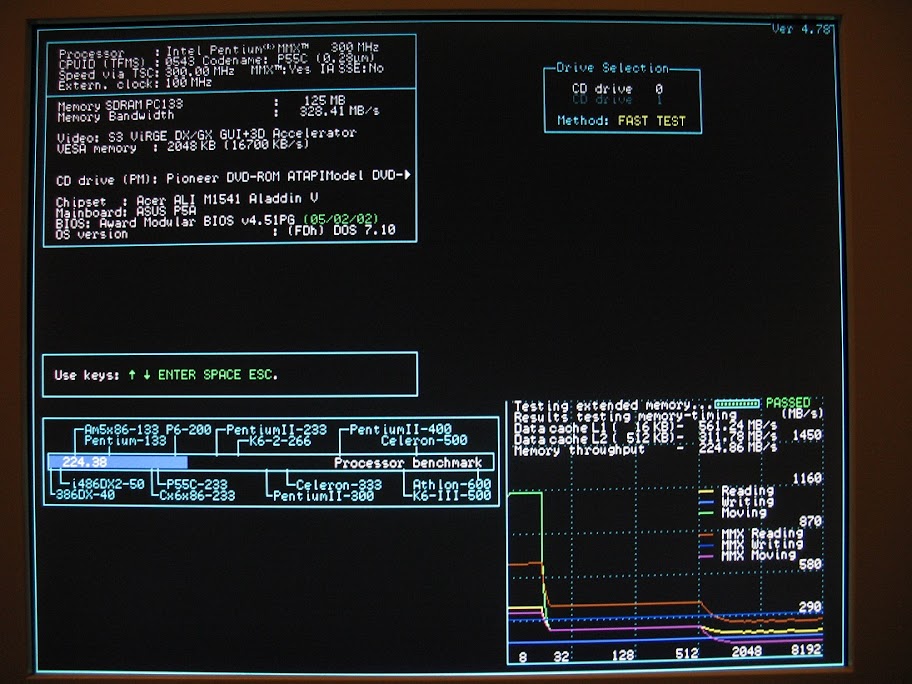 I see that other people are still having fun with the P55c project. 😀 It's a good one.

5u3, I notice that you have set your Asus P5A 1.06 board to use an I/O voltage of 3.8V. Please can you tell me how this was done? To the south of the mobo's VIO1 jumper, there appears to be another similar looking jumper called VIO0. Currently, it has no jumper on its 3 pins. I set both VIO1 and VIO0 jumpers to the 2-3 setting, and noticed inside the BIOS hardware voltage area, that the 3.3V setting had a value of 4V! That's a bit too high for my liking. What is the VIO1 and VIO0 jumper configuration, for an I/O of 3.8V? I have read the manual, and it doesn't even state that jumper VIO0 exists! Thanks a lot.