Not sure if you noticed, but it has some damage on the lower edge near the middle. The plastic is broken there.

Ya unfortunately, I repaired it from the inside with a soldering iron when I got it.

Repaired a Gigabyte GA-8i945PL-G board to put my Cedar Mill 631 into. Should make a nice P4/DDR2 machine. Basic RAID support (IT8212/GigaRAID chip), Gigabit LAN.
Next up for repair is a Geforce 6600GT 128MB that has 2 missing resistors (broken off) on the PCI-E connector. It's a Palit card flashed with a Winfast BIOS for 6600GT. 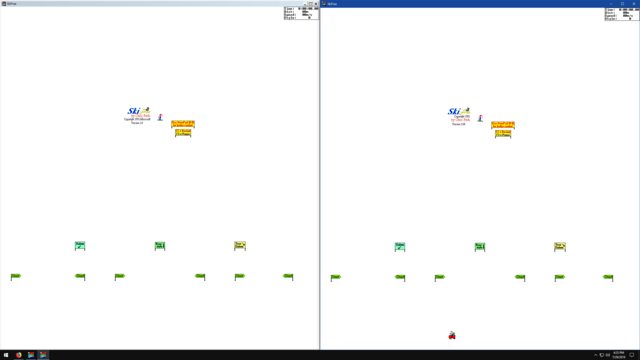 I also replaced the screen, shell, and screen cover on my GameBoy Color with a new backlit display, glass screen cover, and a purple-ish blue shell. Soon, I need to find the GameBoy Color Game Link Port to replace the busted one and the GBA ones require a slight case mod and the GBC ones on eBay are overseas and cannot be purchased due to security reasons.

Just more useless icons, getting down to the point where three people worldwide would have any use for some of these. My 1.4GHz Tualatin-S RDD has begun to have problems with the 3.5" floppy drive, spitting out invalid Track 0 error at every disk I put in the drive. After a very long and time consuming troubleshooting, I've replaced the cable with a new one, which was indeed the culprit, or better to say, one of the culprits: many of my disks were bad or have become bad in the blinking of an eye, even after formatting them. So I've separated the working ones from the bad ones and now at least I have a set of 3.5" disks that I know for sure that work, for now.

On the other hand, if it counts as a retro activity, I decided to bite the bullet and buy a new motherboard for my system, and my choice went for the Asus TUV4X. Apparently this motherboard is very overclocking friendly and should let me overclock my Tualatin more safely than on the Advance 10T I currently have. The only drawback is that I lose the ISA slot, so no AWE64 Value for me, but at least has four SDRAM slots and so, theoretically, I could expand the memory up to 2GB. That's interesting, because I heard that the previous generation of the motherboard, the CUV4X, also supports 1GB SDRAM modules... I wonder if the TUV4X has the same undocumented feature... If so, I might be able to expand the RAM up to 3.5GB, since I have three 1GB ECC PC133 sticks.

I agree with you at the cube. I hope I can fit my Cooler Master Jet 7+ cooler on that motherboard, at least there won't be the risk that the fan snags on the power cable. Or else I'll just go back to the old AVC cooler with the thin 60mm fan I took from a dead Athlon XP 2000+ system.

Installed Windows 95 and then ME onto a Jaz cartridge through an external SCSI drive after flashing the 3.10 BIOS to my SCSI controller. Did it all for the giggles, I don't plan to actually get any real use out of it, it's just to pass the time until I receive my terminator in the mail for the internal drive and get onto installing DOS/NT4 onto it.

Found some purpose for an old CRT monitor I had in storage: I'll certainly be getting the light gun for the Dreamcast soon, should play nicely with this monitor.

Also related to this monitor, but unrelated to the Dreamcast - I bought one of those cheap Chinese "MTVBox" TV Tuners with VGA output. The extremely broken English made mention of things like S-Video & Component Inputs, but of course this thing only had RF & Composite Inputs, plus VGA passthrough. I hooked it up to the pictured CRT monitor and tested a couple of systems out, including an 8088 PC with CGA Composite output.

As expected, the overall quality of the MTVBox was poor but I was intrigued by it's handling of CGA Composite. It couldn't quite render normal CGA graphics colours, nevermind the Composite artifact colours, but it did work perfectly in Monochrome mode. So whilst this device is generally crap for colour gaming, it'd be good for simply connecting up to modern monitors for general DOS & text based usage.

The Dreamcast on a VGA CRT monitor is amazing.

I have 2 Compaq SLT 286 and 1 SLT 386 and I've just replaced one of the IDE drive with a SD IDE adapter but after I installed the compaq software incliding dos 5.0 it doesn't seem to wnat to boot.

I think my SD IDE card is the same as mcobit's but wanted to knowe if there was a setup and wiring guide to install the card with a 2gb SD card.

Cleaning 2 classic xbox that I bought this weekend and probably remove the RTC cap.
Cleaned an Atari 2600 Jr from the same lot and repaired/soldered the AC adapter (they cut it in 2 places and used screw type wire connectors)

Today probably some cleaning and disassembly of 2 very dirty systems. I didn't want the insides since I already have a lot of P1 era stuff but I had to take it too otherwise he would scrap it :p The cases were the things I wanted.

Cleaning 2 classic xbox that I bought this weekend and probably remove the RTC cap.

Hope with "remove" you mean "replace". The classic Xbox has a stupid bug, that is it will no longer boot from CD when the date/time is not correctly set. So if no RTC cap/battery is present and the hard drive fails, the Xbox is bricked with no way to recover (since you can't boot from CD to make a new hard disk work, not even when modded, and you can't get to the Dashboard to set the date/time).

Aha well with my first one some months ago, I just removed it. Guess I'll order some caps first before removing these 2 and add one on the first one
Thx for the info. They did not mention that in the video 😀

After I pulled the cap from mine, I remembered I didn't have any suitable replacements in my pile of caps from college that only collect stray electrons, and dust. Ordering a single capacitor is a massive waste of money. I would say I miss Radio Shack, but those buttholes were charging $5 per LED before they shut down.

I swapped the 386SX25 for 386SX40 on one of my boards, now to find an oscillator to make use of the new speed capability 🤣

Today's thing has been getting a Mitsumi D359F2E floppy drive back to working - I now know how to fix the belt on these drives 😁 The drive seems to be unique to this little Daewoo DN7400 486 DX4 75 laptop (with sound! & DSTN 😵 ), so I can't do my usual fix of just replacing it with a non-belt driven floppy drive.

The belt was too stretched even after cleaning it off with an IPA wipe & getting it back to being rubbery, but I'd put another Mitsumi D353F2 out as rubbish - the belt from that is just taut enough to get the drive back to working. I wonder if there's a good way to store these to avoid further belt perishing?

I'm also attempting to repair a very tired Libretto 100CT, which has had the battery leak onto the PCB, destroying a few traces around a memory chip and the keyboard controller. Even when those are patched up, it might just not work 😁

Does working on a couple of metal fans count? I repaired a modern black metal fan that had a horrible sound to it (bearing was making a bad noise) and dusted the heck out of it, along with spraying PB Blaster onto the bearing shafts and on the fan blade itself for easy installation. I am planning on placing grease on the bearing soon so I can prevent it from going out. I also cleaned the green box fan that my grandpa bought in the 1970's and sprayed the bearing shafts on the fan motor as well. Both work a lot better than before and this is my first time fixing fans. I did the same thing with the fan bearings on the Socket 5/7 heatsink fan, the GeForce4 Ti4400 AGP card, and the Radeon 9600XT AGP card as they were either making a noise, not moving, or barely moving on its own.