Green board is a Gigabyte GA-8SIML, and there is a stock GB BIOS.
https://www.gigabyte.com/Motherboard/GA-8SIML-rev-1x#ov

8SIML bios should work.
If you're skeptical, just take the PLCC bios chip from a scrap board, flash it with the stock 8SIML using flashrom and test it on the 8SIMLNF. You have a removable BIOS socket, which should take care of not being able to recover in case the new flashed BIOS chip doesn't play with the board.

Ок, ill try it, but later, may be October / November after HWBot"s challenge.

A little tired of this 3.3v AGP theme 😀
One mother without the phases, another without prescott support , the third one doesn’t pick up some keyboards at all (A4 Ati)
I only buy them, but MP-RZ still best MOBO. BUT it gives random results in 3dMarks 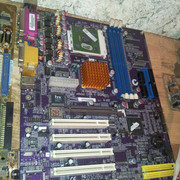 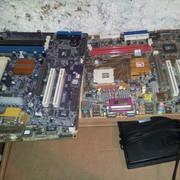 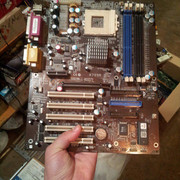 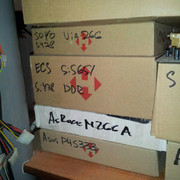 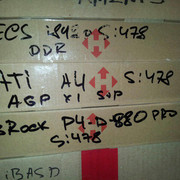 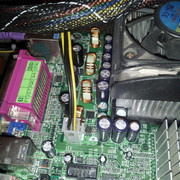 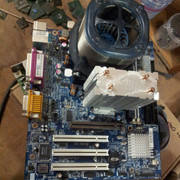 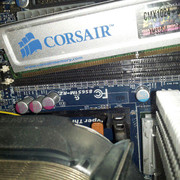 How's the trackball? I like me a built-in trackball, but the one on my Siemens PCD-4ND tends to clog up with dust and grime pretty quickly and needs cleaning pretty much every couple hours. I use one of those old Logitech Trackman clip-ons (https://i.imgur.com/MQh86oz.jpg not my picture) which works pretty well.

The trackball is pretty good. It rolls on two steel bearings and 2 rubber balls. The cover snaps off and is fairly easy to clean. The rubber balls on the encoder shafts sometimes need realigned for optimum tracking but if that's set just right it works pretty well. Also, being on the front, it makes it easy to use laying down.

I added gameport disabling feature to an IO card I got today, tested couple of my motherboards with strange results and found that one 400something MB HDD I have seems to have gone bad (BIOSes wait for it to spin up, despite it having done so already).
Also replaced a dumb WinBIOS with a MR BIOS on one 486 board I have.

Yesterday evening it was my wifes day to decide what to do, which usually is netflix. Jokingly she said we could play video games... so wie did.

I chose to install winape and play a game i did when i was really young; Hanse on an Amstrad CPC464:

edit: of course in "green"-mode as i had to back in the day

Glenden Wood is now assembled and its first benches were taken -- unfortunately in my haste I forgot to ensure DMA mode was enabled on the hard drive, whoops. I'll have to bench again later. For now, it's time for bed.

Amusingly it still managed to hand Samsur its butt. Although I had some minor difficulties getting it going at first, now that I've got it (bad RAM stick and the CMOS settings had become corrupted and needed cleared, weak but not totally dead battery) it's rock solid. Runs 98SE, Nvidia driver 45.23, Vortex driver 2041, and Intel INF chipset driver 6.3.0.1007. Took an eternity to partition and format my 320GB hard drive because I insisted on using FDISK (the version distributed as an update to Windows 9x sometime around 2006) and not "cheating" by using some other utility that can quickformat a raw drive. In general it's quicker and more stable, what's not to love? As a bonus the seller also included the Tualeron 1100 he had tested with, so now I have something to slap on a pin-modded slotket and use in a 440BX rig if I ever get around to it.

Oh, and I had to redo my partitioning because I realized it came to me with no 48-bit LBA support. Thankfully a BIOS update was relatively easy to find (unlike the manual, still haven't found it, if anyone has it would you point me to it? Board is Canyon 6SP2AS-T.) and that fixed it up.

Last week I got my hands on arguably the fastest So370 board, the ECS P6S5AT. I fitted it out with P3-1400S, 512MB PC2700 DDR (overspecced for the 133MHz RAM clock, so able to run at CAS2) Voodoo3 and Turtle Beach Montego II (Aureal 2) - and I had a spare 120GB SSD, so figured I could use that for storage using a PATA-SATA converter. Should be below Win98's 128GB limit. Nope, got detected as 48GB, completely failed to be usable. Had to fall back on an 8GB SSD I had lying around. That did work fine and Win98SE is nice and snappy as expected. The P6S5AT is already running the latest BIOS, so an upgrade's not going to help.

Probably I'll swap the Voodoo out for a Matrox G400Max (and maybe a V3 3000 PCI next to it), but will also look around for a bigger but still not too big SSD, maybe an Intel X25E 32GB SLC drive. Total overkill, but that's the idea here 😉

Today I have completely installed and configured (another) slot 1 PII pc (also performed a bolt mod on the heatsinks of three PIII SECC2). This time one of my custom (and 'modded' hardware wise) Dell systems. For once (or because I'm experienced now) everything works after the first installation (Windows, DOS, DMA, graphics, sound, everything). Preparation and the right sequence; it makes all the difference. Quake runs silky smooth at 640x480p 😎 Have ordered a Logitech Z130 speaker set, so that I can (fully) test the sound tomorrow (can't wait to hear Crystal CS4236 OPL3 emulation 😎 ). Two more modded Dell PII pc's to go, thereafter a modded Dell PMMX, a custom PIII and two custom Celerons, that will all be offered for sale soon.

Went though and sorted out my ram stash. Found four 32meg 72 pin simms. Tested a whole bunch of ide drives without any faults. Tested out isa/vlb multi i/o cards as well as my Promise EIDE multi i/o card for large IDE hdds. About to go through my isa nics.

Spent the entire day assembling a P166 system for Win95 use. The D-Link ethernet card is allergic to its drivers, so I ordered my old go-to, a Linksys LNE100TX. The CD drive won't eject when connected to the system, though it's recognized without issue. Annoying. This is all hardware that came with the gutted remains of the system when I bought it, too. At least I got Win95 installed and spruced up on a 4GB CF card (divided into two partitions).

This system is right between my 486, and my first computer, in terms of specs. Suitable for DOS games, no doubt. The only thing I don't like is not being able to use XGA resolution. For whatever reason, the video card freaks out my monitors at that rez.

Swapped the Vortex2 for my SB0090 Audigy and installed XP SP3 on the Tualatin rig. 98 was fine and all -- plenty stable and everything, I just randomly got a bug and felt some odd feeling of nostalgia for XP I guess that couldn't wait until I got a 754 build put together. Maybe I'll put it back how it was once I get that squared away.

I now have a 50MHz VLB machine, based on OPTi 895 chipset. I can run RAM with one wait state on reads and cache at slowest timings. I'll have 10ns cache available at some point and I hope to be able to max out that machine then. I also swapped the BIOS from a crappy WinBIOS no a MR BIOS and replaced 2 digit MHz display with a 3 digit one ~

Have you tried flashing the BIOS? That's how I recently fixed my P3B-F.

Put the job on pause for the moment while I wait for the NIC, though I still need to test the 5.25" floppy drive. It was completely caked with dust when I removed it. The power supply fan is also starting to rattle, but I can either lubricate it or replace it if it turns into an issue that can't be resolved with a slap. Chipset drivers seem to be stored on a server in Brigadoon, but mercifully, everything still works in spite of those issues in the device manager. It feels a bit strange to be using an AT keyboard with an MMX Pentium system when my 486 DX2 uses PS/2, but then, it's not like I had a computer before 1998 anyway. I've got a mountain of old CDROM drives in my basement, so I'll root through those to see if I can find one that will play ball, and I'll also try out some of my newly-manufactured PATA cables, just in case the original cable in the system is gonky.

I really only do this stuff because I have a compulsion to "complete" things I acquire, if possible.

EDIT: CDROM drive replacement was successful. Disc used to test: Transformers: The Movie - Soundtrack - Track 01: The Touch (Stan Bush)
A 52X drive is a bit anachronistic, but whatever. At least it's not a DVD burner. 'Til all are one!