Mine are usually from pre-internet era. The most debauched thing I found were pics of Pamela Anderson in gif format in size of a postal stamp 🤣. Usually it's DOS, Norton Commander, some database and Monkey Island ;D

I occasionally found photo's on harddisks people gave to me. Since I know these people fairly well I explained to them it's best to wipe your harddisk properly before you give it away. Recently I sold my old computer, but not before completely reinstalling the OS from scratch and if I remember correctly I used some utility to overwrite any remains of deleted files. While I don't keep anything of any real interest on my hdds it just doesn't feel right to me not erase them properly before getting rid of them. Also, if a hdd went into the trash, it would first be thouroughly destroyed by me.

I found TONS of games on retro machines this way. Once I did get a computer with personal data on it - SSN, tax info, all that - I DoD'd the drive and reinstalled what I needed on it, and then contacted the seller - "Hey you left your SSN and tax info on the drive, as well as the programs needed to read the files - I deleted everything on the drive, just wanted to tell you that this can be quite dangerous, and you should always delete etc." Reply - "Yeah I saw that, the data is old, so I left it."

Not even mad about not getting any acknowledgement, but unless you changed your SSN and tax information, that information does not really expire.

Don't go out of my way to look, but sometimes you stumble over stuff... once I found an old system in the street in front of my house. Booted it up and it booted straight through to Win98 with my neighbour's 2007-2012 tax returns on the desktop (this would have been around 2013). Next time I saw him I pointed out that it wasn't such a smart move. He just shrugged.

Nuance: this is Europe and as there is a centralized civil registry per country, things like SSN and passport data are far less easily abused than in places like US where that isn't the case. Still, I wouldn't leave mine out in the street regardless...

Nuance: this is Europe and as there is a centralized civil registry per country, things like SSN and passport data are far less easily abused than in places like US where that isn't the case. Still, I wouldn't leave mine out in the street regardless...

Yeah, If I sell a hard drive or PC other than retro stuff (I don't keep anything sensitive on those), I always properly wipe them. First making a full disc encryption with several times overwriting the data than format the drive. My portables are encrypted anyway.

After a year and a half of use, I thoroughly cleaned my lovely Model M keyboard today. What an awesome daily driver on my main PC...

Started putting Humpty Dumpty back together - Humpty Dumpty is my 1993 NEC Ultralite Versa 25C that's currently....well....cracked up. Currently I'm poking around the motherboard figuring out why it's ticking when charging a battery, refusing to throw any sign of life onto the status LCD (found out how to get that to happen today), or why it's not powering on (other than a crystal oscillator that looks like a WWII era can of Spam left in the swamp for 100 years).

Here's the shortform rundown of all I found out about this thing since I started working on it
- plastic has shattered, leaving me a Jigsaw puzzle, but I might be able to BSSG (Baking Soda + SuperGlue) my way outta this one with some help from J.B. Weld and Guitar String ends
- Screen is totally shot but the controller boards will be good to reuse on my NL6448AC30-10 - I need to put some FFC connectors on the panel board sides and get some 30 pin FFCs for that
- Might be able to get around not having a screen casing by using the M/75 Touch Screen casing I have - and making it touch in lieu of a Trackball (the original Ultralite Versa had no pointing device)
- Original power supply (huge brick thing) is also shot, looks to be leaky caps, or whatever spill damage that did this thing in got the PSU too, Fuse is good
- Original Motherboard started to show signs of life with some poking around, but I'm going to need to desolder the power boards off and assess the damage underneath. Might need a few components replaced.
- There's a Toyocom 1.8MHz Can that rusted out on the bottom of the motherboard - no damage to the board itself, but that component....something liquid got to it
- Keyboard is badly yellowed, did this guy smoke a doobie an hour?
- 100MB HDD is still good - who in the heck put Windows 95 on a 25MHz 486 SL though is beyond me....it looks like Windows 3.0 may have been the original version (with DOS 5) given the Chess Wallpaper
- I've already removed the logos from the screen and retained them

Holy cow... there is so much wrong with that computer.

If you restore it and get it working, that would definitely deserve it's own thread. 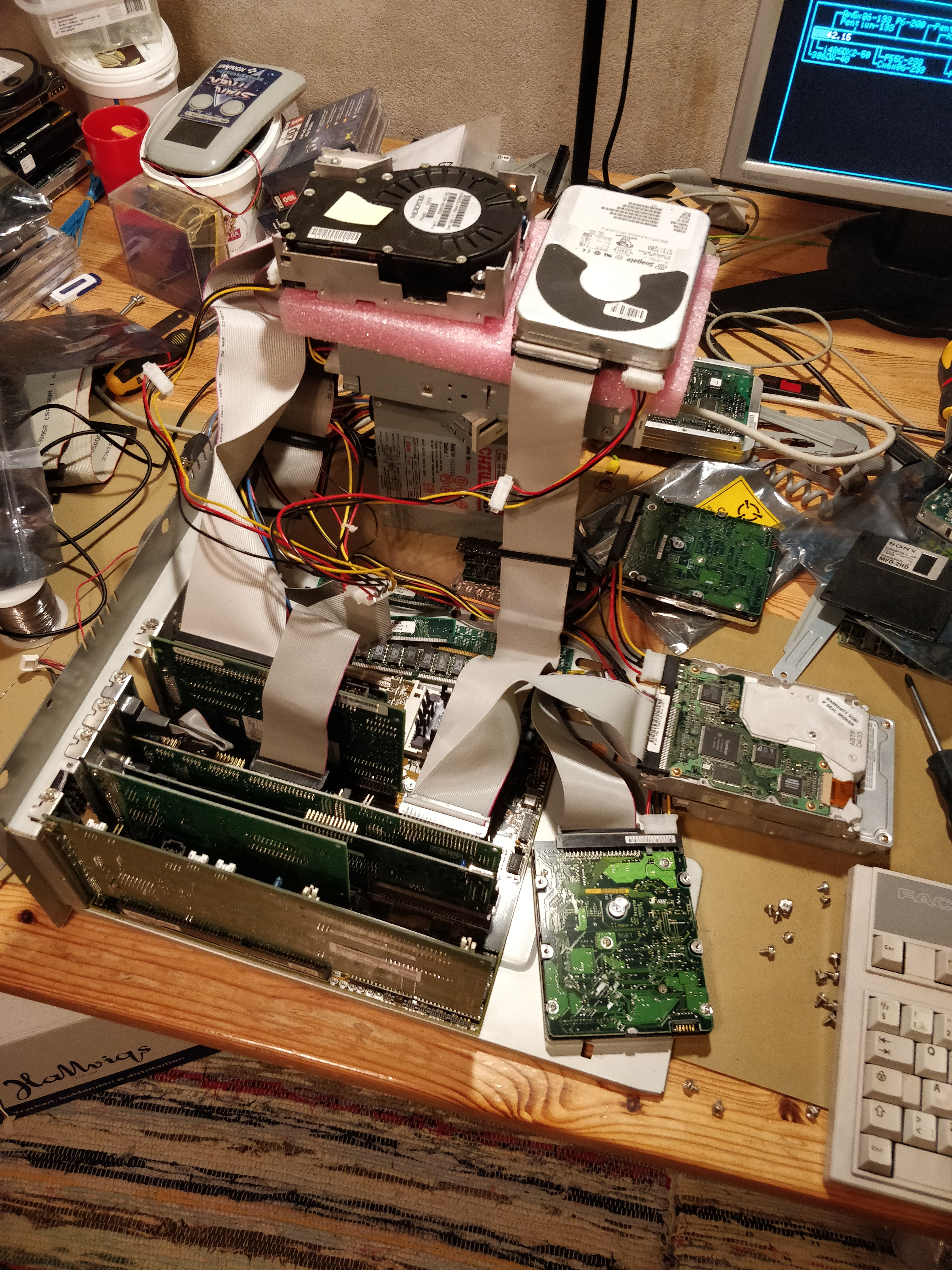 Trying out some harddrives for my next build 😀

Can anyone guess what its going to be?

Also, those hard drives sitting atop that PSU, CD and floppy tower just makes me think one of them is going to throw themselves over the side, base-jump style.

Also, those hard drives sitting atop that PSU, CD and floppy tower just makes me think one of them is going to throw themselves over the side, base-jump style.

Thats just to make it more interesting to change floppys 😀

I only had one 50pin scsi drive that was working so my original plan had to change a bit. A 486 is correct and its going to be a little bit more special then it was 25 years ago when my grandfather bought it.

That's one hell of a precarious hardware tower..

Was trying to get a P4EE 3.2GHz to work in my old Toshiba Satellite P25 DTR laptop. Unsurprisingly, it didn't work.

The laptop shipped with a 3.4GHz Northwood, which is why I was hoping it'd take a 3.2 Gallatin, but I guess there's just no BIOS support. Oh well. Had it worked, I probably wouldn't have kept it in there for more than a couple of hours for benchmarking. The EE chip is definitely more at home in the massive Dimension XPS it came from.

Any Atari fans here? I managed to nab thid Atari 520ST when I noticed it was being sold locally on eBay Canada.

Not that I really have the hobby money to split on another type of retro computer (I need one of those Atari diskdrives, and the mice are hella expensive!). I mean i just sold my TI 99/4a for that exact reason, but I couldn't help myself I guess. This is as close as il probably get to owning an Amiga 😜

Over the weekend, I added the native PS/2 mouse mod to this 386SX ISA SBC, which shares the keyboard PS/2 port so I can use a standard splitter to use both 😀

Today and yesterday I've been having fun with the MT32-pi, which is at this point, quite a ready to use project!
All I had to do was edit some plaintext items in the mt32-pi.cfg file, following their now easy-ish to use MT32-Pi Wiki
I added a DAC, screen, MIDI in optocoupler and rotary encoder to the pi 3b. The wiring is a tad messy but it sounds awesome with the DAC and through this Bose speaker that I'm fond of, because its standard EQ makes FM sound fantastic.

There are some pi hats around already that people have made for this to simplify it but they use the oled screen, I like this 20x2 screen, I might still go that route potentially . I'm wondering if I should try designing up a casing for this so its less messy, but it might need a PCB since the wiring is such a hassle.

Really cool project though, I'm surprised there isn't a dedicated thread on here given its utility and how much MT-32s cost now.

FFS it died again.
Put away working now it's stuck in a reset loop.

Maybe I didn't clean the flux properly and it's behaving like a capacitor?

Yes, I think it can be done without problems, the E21X0 can be overclocked until almost doubling the FSB, and without overvolt.
Currently the 4400 has been slightly overclocked by taking the FSB from 800 to 920, the frequency rises from 2.0GHz to 2.3GHz.
An E4600 that I ordered should arrive in a while.
Unfortunately the MB ECS has video built in, and I wouldn't want to cause problems by raising the FSB too much (up to 1066).

Try doing the BSEL mod with aluminium tape. That way the CPU will present itself to the board as if it were a genuine 1066 chip and all timings and dividers will be in spec.