Hey all, new guy to the forum, but not to computing in general. 😀 I have a Gateway OEM MS440GX that unfortunately someone force flashed with the standard Intel BIOS version P20. I'm familiar with the force flash technique for Intel OEM boards The board works OK, but i've seen a funny issue where if i list the removable drives in the boot order, it shows part of the hidden "cpu setup" menu instead.. The Intel MS440GX has integrated audio and NIC, while the Gateway OEM one doesn't, but the BIOS still shows the option to enable/disable the nonexistant NIC. Another issue i've noted is that the two CPU fan headers for the Xeon Slot 2 CPU's don't work, which may be involved with the BIOS as well, as they are software programmable PWM headers i believe, in any event, no fans hooked to either of those headers will turn on at all.

I've looked at gateway's support site, but it appears all the materials for this board have been removed. Any ideas where i can get the Gateway OEM bios for this and give it a try??

Have you tried using archive.org? If you're able to come up with any links to the old support pages or a URL to the BIOS file itself, then archive.org might have an archived copy. I've sometimes been able to retrieve old files that way.

Unfortunately I think it might be difficult to find anybody else who has the same board to dump a BIOS from - Slot-2 and 440GX boards in general aren't very common.

I did try that, but ultimately i did get the BIOS files 😀 .. Turns out you should just do a search for the Gateway board number, and "BIOS". Then it returns the correct site, and they actually do have the files available for download . The board is a Gateway 4000427, now it's got a force flashed copy of Gateway's P17 BIOS on it, it fixes the cosmetic issues, but still the fan headers don't work.

The headers might have been overloaded by somebody. There's probably some tiny 3pin transistors near each header, they might be burned out. It can happen when somebody has a bad fan and ends up trying it in both headers.

Some of the old support material is still on the Gateway site (at least, last time I looked), but can't be accessed via Gateway's own search engine. Try using Google and search on the gateway site only.

Have you looked at the file on DriverGuide? - 7505904.exe. Here's a scanned local copy renamed with the zip extension

https://www.driverguide.com/driver/detail.php … driverid=884407 - file contents are at the bottom of the page

where is this GIF from?

at the 0:27 of the video.
Vinamilk ad, don't know if it original or they rip it off somewhere
https://youtu.be/1LfM0fgxio4?t=27

Found the animated gif thru Google image search - did a quick crop / resize and hey presto! - never even noticed it was a product ad (actually thought it was from an animated series called Shaun the Sheep), though having watch the Youtube link, I like their other ads.

The MS440GX has a fan multiplexor that seems to switch the Fan 1 input between the three case fans with Fan 2 being four CPU fans, but I could not find any software that supported the fan multiplexor. As I develop SIV this was no real issue and as of the SIV 5.49 release SIV does as you can see below. 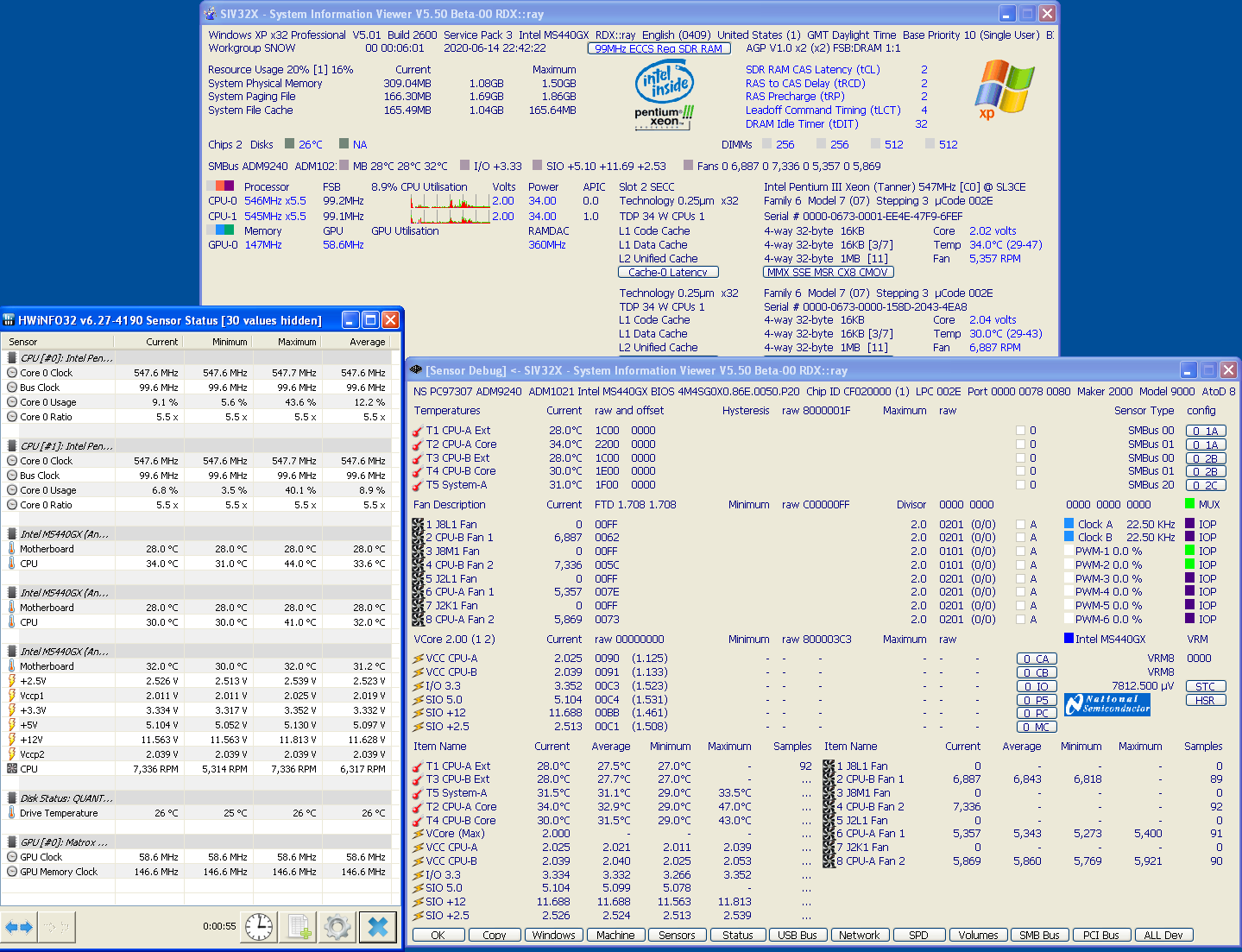 I was able to resolve the 2MB issue by installing a VRM 8.3 module in the empty socket. After that, 2MB CPUs and dual CPUs worked fine! The module I bought is intel P/N 697701-602.

I’ll check on the fan speed and report back when I get a chance.

I was able to resolve the 2MB issue by installing a VRM 8.3 module in the empty socket. After that, 2MB CPUs and dual CPUs worked fine! The module I bought is intel P/N 697701-602.

I’ll check on the fan speed and report back when I get a chance.

Thank you and that's good news, I will check which VRM I have later. Before you got the VRM 8.3 module did you have one and if so which one was installed please? Do you know if it's possible to get 700 or 900 MHz Xeon (Cascades) CPUs to work?

My board is Gateway OEM running the Gateway P17 BIOS, so it only supports up to 550 MHz Tanner CPUs. I’ve read that the intel retail version of the board works with Cascade CPUs, but don’t have any personal experience with it.

The one I have is I tried a pair of 700MHz + 1MB L2 SL49P and the system would not post with the post card reporting 38 (Memory high address line failure at 01000-0A000 (non-fatal)) 2F (Enable cache before system BIOS shadow), see http://www.bioscentral.com/postcodes/phoenixbios.htm.

BTW As it a Gateway rather than an Intel SIV may fail to report the fans, if this is the case and you post the two Menu->File->Save Local files it should be trivial for me to fix this.

I know I'm replying to the original post, but there was a special internal BIOS build for the MS440GX that supported Coppermine-based (also called "Cascades") Xeons. I had that board running stably with a pair of 2 MB Pentium III Xeon 700 MHz CPUs for quite a while. (Until well in to 2004 when I finally replaced it with a "modern" computer as my daily-use PC.)

I just found the above post and guess I need the "special internal BIOS", I wonder if anyone has it.

The VRM socket was empty before I bought the VRM 8.3 module.

I just got the same module, it works fine with my 550MHz 1MB Xeons, but as I expected the 700MHz 1MB Xeons still fail with the 38 2F post failure.

An interesting development with BIOS P17. It seems that ONLY Pentium III Xeons work now.

Not being able to use PII Xeons is a disappointment. I tried flashing it again, but that didn't fix the problem. Now I need to track down an older BIOS to try to flash it back if I want to return this system to its original configuration.

Does anyone have a link to or copy of any older Gateway BIOS version?