Truly sorry to hear this 🙁

Would it be possible to try to dry it out using rice-grains or similar before trying it out further?

Lets hope for the best during the circumstances.

With this machine it is best to dismantle it and air out and dry the metal components asap. There are steel parts that will rust and leave rust dust everywhere and make it ugly. Not to mention the solders will oxidize. And then screws and threads will rust up too, pain to remove later if they're not removed and dried.
If it wasn't cleaned, there'll be dust inside. The water will move the dust in obvious ways. Best to squirt in highest percent alcohol into areas with evidence of water to flush out residual water and minerals and dry. BGA wasn't much of a thing for this era so you have that going for you.

Use antistatic cloth to dry it off. Ones used for cleaning photographic film also work AFAIK.

Consider yours lucky, they were not powered when got wet. This is where damage happens when powered up. Ultrasonic machine is not necessary.

Get few jugs of 70% or 99% alcohol ISO for final rinse helps drying up, and pour liberally all over the boards and power supply after washing them then rinse them out with warm running water.

What this does is rinse the water out and thins water out rapidly and that will get water out of tight spaces and what behind is alcohol that boils away cleanly in warm place. Do not do this in not ventilated room. Bathroom with vent fan running is perfect or do it final rinse outside.

This is what we use to clean up wet phone's boards where I work fixing up phones and liquid damaged notebooks with after a run through ultrasonic then rinsed with clean water then final rinse with alcohol.

Trust me this is established method.

After checking it out, the T5200 fired right up and is still working. I still have the problem with my replacement CMOS battery discharging, however.

Hamby, what replacement battery are you using? I'm on the hunt for a decent replacement myself a" (unfortunately i should say) i purchased a rechargeable 14500, 3.7volt battery (i say "unfortunately" because it will require a special charger as i have learned now, plus the uncertainty if it will "back-draft" from the T5200 itself, potentially causing disaster??).

Reading this thread and forum, i have learned that there are as many truths as there are people. Some use 2032 non-rechargeable, some use standard triple-AA batteries in a holder, others use yet other solutions. It is quite confusing.

Googling this particular model, i have yet to find what kind of battery and voltage it came with originally from the factory - was it 3.6 volts non rechargeable? Or was it some higher or lower rated power cell? Yet to find that out... 😁

Hi,
I have two T5200 and in both of them was the original (non-working) Battery when i got them.
Battery type is TL-5242 from Tadiran. These are square, have the correct connector and fit perfectly in place.
I got new ones from Digikey which work perfectly, obviously they are still manufactured... i guess.
https://www.digikey.com/product-detail/en/tad … -1026-ND/512528

That is good knowledge kultakala, thx 😀

I bought a "SAFT" 14500 3,6 volt to replace the old one (same battery) and i "think" it worked once when i removed the power cord (it retained cmos values) but the second time around, i always get the cmos checksum error upon boot 🙁

The TL-5242 is obtainable in my part of the world as well, but it is ~36usd + shipping. Maybe i'll have to overcome that and get it anyway (LOL).

The SAFT was not the issue, the battery cable was. After soldering new leads in place (bypassing the cable breakage) it now works consistently 😀

I tried to pull off the original 40MHz Crystal but it's stuck. Then I started to get worried that I could break traces on motherboard or something… Now it's halfway pulled and left it there, still works.

One day I suddenly fell in love with a retro computer.
I bought my favorite T3200sx. While studying the T3200sx, I saw your wonderful work.
Send a compliment. And thanks to the T3200sx Bios work.
If I use this bios, would you be able to use the Gotek Drive on the exterior of the T3200sx just like your T5100 work?
Looking at the posts of other members, you seem busy.
I would appreciate it if you had the time to answer my questions.
I am happy to hear your reply.
Thank you for your pioneering and wonderful work.
I pray for your health and happiness.

The only disadvantage of a disposable cell is that they discharge and must be replaced.

Rechargeable lithium cells should be driven by a compatible charge controller to reduce the risk of the cell heating and rupturing, but most vintage motherboards used a dumb trickle charger into a NiCd or NiMH power pack.

I switched to the rechargeable because I thought it was discharging my regular 2032s (like... immediately). Thing is, when I fire it up, I get an error for the unrecognized drive... which I kept thinking was because the BIOS settings had been forgotten.

I wonder if you'd be willing to assist me making similar modifications to a BIOS for a Grid 1530 laptop?

It's limited to only a few Conner drive types. I've documented my "progress" in this thread at VCFED: http://www.vcfed.org/forum/showthread.php?739 … ld-GRiD-problem

In the first post of the thread Klyball documents what he had to do to the bios of other Grid laptops. I'm afraid making the same mods to my 1530 BIOS is over my head.

As noted in the post, I had some success using a basic program someone wrote to re-write the BIOS drive table.

If you're up for the challenge, I can provide the even/odd bios images and any other details with a little guidance.

As a kid I cut my teeth on a T3100/20 that I was given (my first PC - when everyone else had Pentiums!) , including DOS commands and some QBasic. Anyways after researching the T5200 recently I thought it was more practical and found one on ebay, and I've jumped head first into the rabbit hole of Toshibas again!

First up, shout out to IanB for his mods - I replaced the busted floppy drive with a gotek USB (sacrilege, but practical). It wasn't fun doing the cabling but totally worth it!

Second, I uploaded some high quality pics of the guts of my rig, including RAM, floppy mod, and the aftermarket CMOS battery it came with, hope these are useful to others:
https://photos.app.goo.gl/ahrCAmGZybXRYxjD6

Third, I've compiled a OneNote notebook on OneDrive with a lot of the info I've pinched from this site and the web (reading tens of pages of forums is not a great use of anyone's time in my opinion!). I don't want to step on toes here so let me know if you'd like me to link it. The beauty of the OneNote is that I can allow you guys to edit/add to it, like a wiki (IBM ThinkPads have a wiki for linux stuff which I think is awesome).

I plan to replace the 3x fans with something quieter which should be simple as they're standard 12v 4cm "dumb" fans. Cheers!

nice pictures 😀 what will you replace your fans with btw? Personally, i think the original ones sounds way too loud so i would gladly like to follow your advice for new ones

@my03 - I haven't decided yet on the fan replacements, lots of "silent" ones on ebay but the postage is gonna take forever. Will keep you guys updated.

As much as I love the authentic 100MB HDD, pretty sure the drone sound of it is giving me headaches so I might end up swapping it out. BIOS flashing is a little beyond my skillz and tools right now so maybe next financial year haha.

2 things that have stumped me - and they may not be specific to this machine (let me know as I don't wanna derail this thread!):

The real time clock only seems to work when the machine's powered on. It never loses time/date completely, but if I turn off the machine at 5pm, next time i turn it on it will still be 5pm (it will then resume till next power off).

Under most circumstances, the machine never seems to use the top-most/bottom-most parts of the screen. After some fiddling I found Qbasic SCREEN 12 and a DOSSHELL display setting that utilise the entire screen. DOS, qbasic/edit, games (wolf3d, keen, arkanoid) are stuck in a letterboxed mode:

OK so I fixed my CMOS clock (RTC) with a new CR2032 battery and diode based on advice from others on the forum. I imagine this "mod" would apply to almost any system with a 3V RTC. Here's some pics to help others: 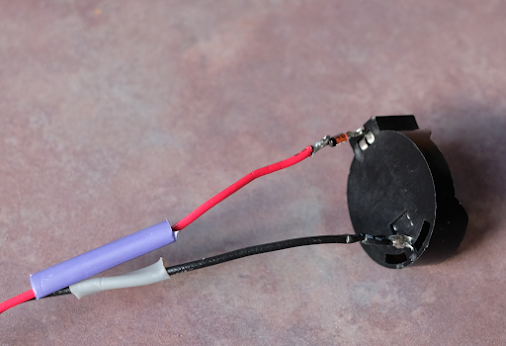 Placement of battery holder (bottom left, near the speaker - underneath keyboard): 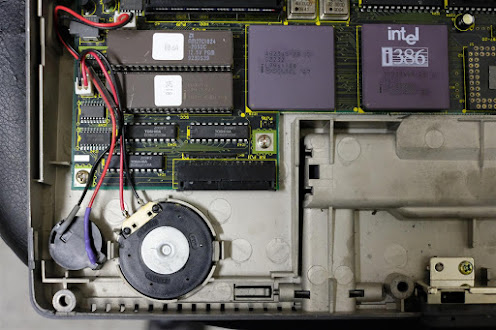 I also painted the Gotek floppy emulator, and found a red LED inside that shows activity so I mounted it (no idea why it isn't mounted by default?) 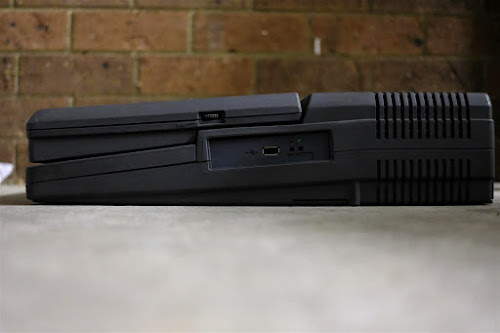