Got this case the other day.
Don't know what year it is.

On the right the black display it has the MHZ display but i have no idea on how to turn it on.

No point integrating the full size photo with the "img" tags - anyone can just click the attachment thumbnail.

Lucky that it indeed has the MHz display build in and not just the window for it.
Pentium and later systems had little use for it but it should be easy enough to reactivate.
There are only a few basic layouts around:
http://www.minuszerodegrees.net/led_speed_dis … eed_display.htm
And there are countless of threads on the topic here, just search for keywords like MHz turbo LED display.

About the image, i wanted to make it so that it's easier to see it without clicking and i posted it using spoiler so to not clutter the thread.
You're right on the CPU, it's a 486DX4 100 MHz and it has a circuit board with many jumpers on its back, although it's not easy to access with all the components installed, i should be removing some components then i can get a better view.

About the image, i wanted to make it so that it's easier to see it without clicking and i posted it using spoiler so to not clutter the thread.

I got that and it's much to your credit that you're aware of the clutter issue.
I don't know about the user experience on mobile devices or certain browser, but on this desktop firefox, it's perfectly fine to click the thumbnail to open the full size in a new tab or the same and then go back.
Generally, this forum seems very quick, convenient, ergonomic and low BS - so, basically, the anti-facebook 😉

You're right on the CPU, it's a 486DX4 100 MHz and it has a circuit board with many jumpers on its back, although it's not easy to access with all the components installed, i should be removing some components then i can get a better view.

If it is indeed the original system: That is all very much a stab in the dark and more of a fuzzy statistical statement, but if it's an intel or AMD with 100 MHz then, IIRC, pretty sure around 1994 or 5. The 100 MHz was a short intermediate step. After that came 486's peak with the Cyrix and AMD 133 MHz chips which went on to be sold as budget system for years, while Intel focused on the Pentium.
While no one could tell the time it was actually assembled or sold, it's rather easy to determine the maximum age of major components. E.g. Intel CPUs have the manufacturing date in the 2nd line:
https://upload.wikimedia.org/wikipedia/common … _MHz_SK051.jpeg
"L543" means it was made in 1995, week 43.

The MHz thingy, my advice:

- Make detailed photos of anything you can see now, what wires go where, etc. before unplugging everything vaguely connected to the front
(engineering standpoint would be to have comprehensive documentation and insight, but with those old machines, one has to make do)
- carefully remove the whole front plate of the tower. Usually it's a couple of philips screws.

This beauty is the closest thing I own (not rare at all, it's bound to be in this thread earlier on. It says 486 and 66 all around since I got it, without content. The 66 was very long lived):

So, two screws on each side. Then take care the speaker's or other wires aren't entangled and none of the drives gets stuck when pulling it off.

Now, you'll have access and a view to solve the issue with a clear head:

If you module is the same gk-568, this is your lucky day.
It's the type that does not have any direct connection to the mobo.
- first two cables on the left, white and yellow, power the single "Turbo" led besides it.
- second three, orange, black, white, are connected to the switch. And the switch has a parallel set of wires to inform the motherboard.
- last two headers are for a 5 V power, usually provided via a molex adapter to the PSU. They're marked, ground and +5V on the pin to the right.
I was able to confirm all that abusing a simple CD audio cable and an external HDD PSU.
All the other jumpers below are merely to define the display for each segment. So, this being two digits, there are 14 jumpers for each segment lighting up with turbo on, off, alway or not at all - in my case resulting in 66 and 8, respectively.

If your LED module is of a different type, make a clean photo, open up a thread, someone here will have the very same.

I have the mid-tower version of this case, but it does not have the MHz displayer or turbo switch. It's pretty sturdy, and plenty of room for cable management.

This is the closest picture I could find that matches my first *real* PC back in 1998. It originally started it's life as a custom Point-Of-Sales computer in my dad's store, around 1992-93. I'll put this one around the early 90s.

I had seen in another VOGONS thread that someone had posted having (or seeing) a computer with this sort of case: 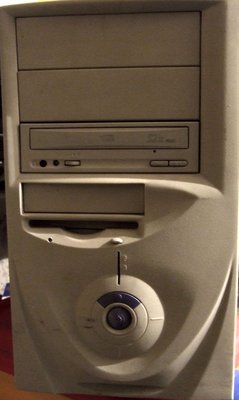 Last year when Fry's Electronics liquidated I was able to pick up one of their corporate machines on the cheap. The one I picked out had this case.

I was wondering if anyone might know the original make and model of it; I had tried finding that out myself when I found out that the Wayback Machine had not only archived some of Newegg's earliest pages for computer cases, but that Newegg used to link to case manufacturer websites and that the Wayback Machine had archived some of them as well. Frustratingly, I'd been able to identify the cases for all the other beige box machines that were on sale during the liquidation except for the ones which use this style of case.

Has anyone had any luck identifying this one?

Thanks, this was very helpful. The earliest online mentions of the T5/T10 I could find were from 1999 so it was kind of important for me to validate their existence in 1998 for a 98 themed build I have 😀 Second half of 1997, at case with pentium mmx The first PC I had was about 1995 and it was a Pentium 60 from ESCOM in a case similar to this one: 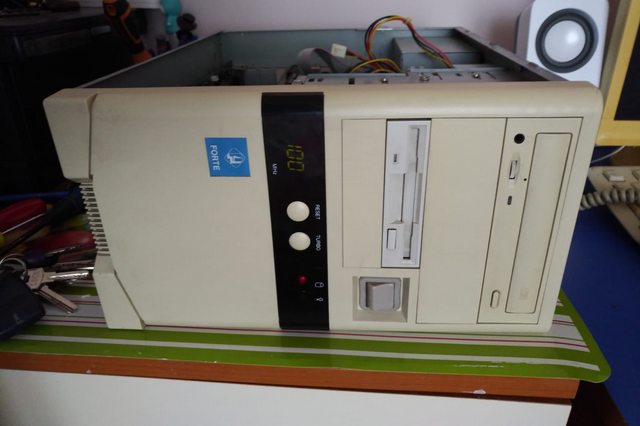 No, the LED figures didn't change according to your CPU speed and if they did only could have gone up to 199 anyhow. They were hardwired somehow. I know this because it kept showing 60 even when we upgraded to a 200MMX and a TOPGUN TX PRO motherboard.

The on/off switch made a very satisfying clunk noise when you used it.

They use jumpers for the leds. This type of psu switch was typical on older towers.