Any one with compaq prolinea net1/25 or 33 aio built in nic?

Im looking for users that has a compaq prolinea net1/25 or 33 with the "built" in network card.

I have been trying to get it work but i cant get it working, so my question is has anyone have experians with the built in network card for the compaq prolinea net1/25 or 33 ? and is it even a standard "tcp" card?

only information i find on all ads are "Network-ready and ideal for peer-to-peer comunications".

Would be nice to get it working in the local network 😉 i have tried two different cards and with no result.

How are you connecting to the network? You would first off need a transceiver to convert to RJ45, Something like this
https://www.ebay.com/itm/NEW-AUI-Ethernet-10B … 8YAAOSwawpXteYh
The above is just a quick ebay search, may be cheaper options.
or some old hubs came with a single AUI port and however many RJ45 connectors.

Which OS are you trying to use?
I would think TCP would work as we are working on the hardware level and the OS's TCP stack is all that matters (AUI it complies IEEE 802.3 just like Coax or Cat5)
You may have better luck with IPX though as that was the dominant protocol during this time, IPX is just about as easy to setup as TCP from dos to WinXP and can co exist with TCP happily.

Honestly though, I'd cheat and find an old Compaq branded NIC with a RJ45 connector 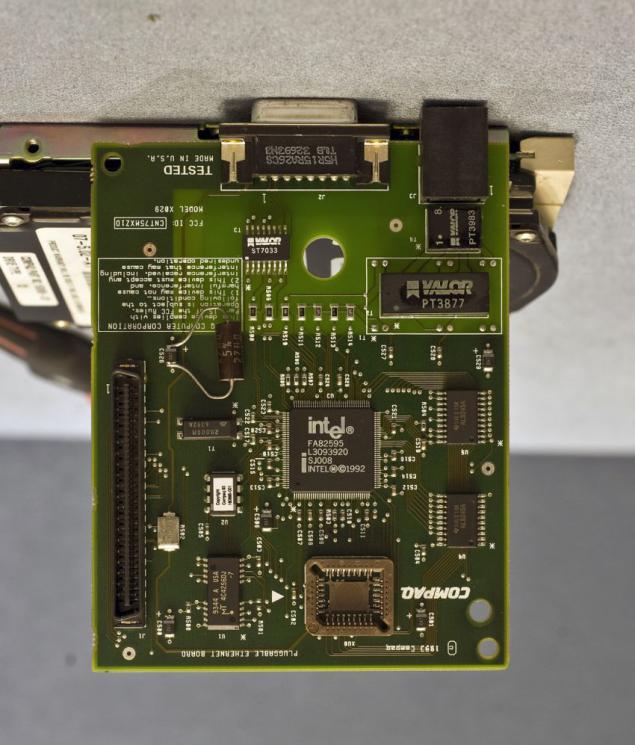 I would cheat and use a standard isa network card but since the computer has two isa slot i would like to use them with a scsi card for external cd and the other one for soundcard,

Opps! in my head I translated AIO into AUI and of course this card had a AUI port just to confuse everyone more!

This site seems legit even though it looks dodgy as hell
https://driverscollection.com/?H=ProLinea%20N … 1/25s&By=Compaq

Going off that looks like the card is a NetFlex-2

Already tried all drivers 😉 thats why i am looking to see if anyone has it working, im unsure if am missing anything in my setup since card is detected.
Only thing i have seen is that it has a connection to the switch / hub at 10mbit but nothing is passing through the connection, wireshark is just silent so im woundring if the rj45 really does work for tcp/ip or maybe a AUI is needed anyway..

Which OS are you running?
Is it using DHCP or static IP? I'd recommend DHCP at least for testing that way if you don't get an IP address you know something is wrong right away, static tends to hide issues.
Can you ping 127.0.0.1? if not its the TCP stack at fault, If you can try pinging the router or something else on the network (but would have thought wireshark would have picked up something if you can get this far)
If RJ45 doesn't work I seriously doubt the AUI will, it was pretty much dead by the time TCP was used in LAN's. Even BNC was already getting phased out by this time

I been trying dos to win9x. I am starting to wounder if it really is a real rj45.

Pinging works locally but nothing goes out from the card, it can only "show" it is connected but not receive or send packages.

Thats why iam looking for some one that has a compaq prolinea net1/25 to see what their experience is with network with the rj45 port.

Doesn't look like many of these PC's have survived so you may be waiting a while, but think your close anyway.
We just need to do a bit of networking 101 as your mixing the hardware and software levels.

We know the RJ45 is "TCP compatible" as you have a link light.
on a 10mb connection its usually just a check that the rx wires (1 & 2) successfully make a connection to the tx connectors (4 & 5) on the switch. It's just checking for a electric signal but its enough to confirm its confirms to Ethernet standard.

Next we need to talk about the Network layers or OSI model, If you check out the below link, or jump to the TCP section.
https://www.electronicdesign.com/what-s-diffe … model-and-tcpip

Ethernet sits on layer 1 and crosses into layer 2 of the OSI model. as you can see in the TCP table TCP/IP doesn't come in till layer 3.
So its fair to say TCP/IP sits above Ethernet, which you know to be working (the link light)

OSI Layer 3 is getting into drivers, protocol's,etc
So the question is
What are you using for networking drivers? mtcip, MS network client, etc?
Does the machine get a IP address from DHCP? if not we are failing here.

Bit of a long answer I know, but teach a man to fish and all, plus its a quiet day at work 😉

Fast story.
First i just tried to use win 3.11 driver and noticed that the computer hanged because not receiving ip address from dhcp, my switch at that moment which was a "Ubiquiti Networks UniFi Managed PoE+ Gigabit 8 Port Switch" and indicated a 10mbit connection and brand "compaq".

I did even try windows 98 and it was the same result as the other once.

I even went so far to just buy a hub to see if that would help 😉 and still connection lite just lights up and the other light i still not even blinking once.

So finally i tried wireshark connecting the compaq directly to the computer running wireshark,
Also here i had connection but no package coming through at all, just a silent connection.

Just for fun i will try what the ad says "Network-ready and ideal for peer-to-peer communication" since i have two identical computer and see if they can communicate if they are direct connected to each-other.

This might be stupid but only thing i can consider is maybe the have some kind a switch of the "pins" for rx and tx which of course wouldnt make sense.

Thats a good sign 😀 each network card has a mac address, a unique id, part of this address is the manufacture.
So the managed switch is able to read the mac address correctly. (This isn't using TCP/IP we are in OSI layer 2) but it's confirmation packets are been received correctly.

Where does the DHCP server live on your lan? Usually its the router on home networks.
If you connect the PC direct to this does it now get an IP address?

When you connected the 2 PC's you would need a crossover cable. otherwise both PC's will be transmitting on the same wires and waiting to receive on the same wires.
This is all a hub/switch really is, a device to swap the tx and rx lines around and send the signal back out onto the network.
Around the time of gigabit ports are smart enough to do this themselves, So if the other PC has a gigabit network card you can ignore that paragraph 😀

I wouldn't expect wireshark to pick anything up, we aren't high up enough in the OSI level yet.
I'd recommend sticking with Win95 for now TCP/IP is built in and much easier to troubleshoot. Once we have the network up and running then we can get adventurous with Dos or 3.11

Hey, I picked up a Prolinea Net1/33 from Computer Reset late last year and it's missing the network card. Is there a Compaq Spares number anywhere on that card that I can search for to find a replacement? I would have sent you a private message, but I just registered and apparently don't have enough forum activity to do so.

Hey, I picked up a Prolinea Net1/33 from Computer Reset late last year and it's missing the network card. Is there a Compaq Spares number anywhere on that card that I can search for to find a replacement? I would have sent you a private message, but I just registered and apparently don't have enough forum activity to do so.

That's a very helpful page to have on hand. Thanks!

Good news, I found at least one place that has these for sale! Perhaps I'll be of some use to the OP of this thread after I actually get my hands on one!

Good news, I found at least one place that has these for sale! Perhaps I'll be of some use to the OP of this thread after I actually get my hands on one!

...And they waited 'til I placed the order to physically check the warehouse, then cancelled my order because they were thrown out in the last move. 😒