Anything worth keeping from this lot?

So, I finally finished going through a lot of old systems got last year. These are late '90s early '00s ATX systems - I sold one case but decided to recycle the others as they're not in the best shape and there doesn't seem to be any interest in them anyway. I salvaged what I could. Apart from a Voodoo 3000 I found in the Compaq, there doesn't seem to be any other interesting card in there. Nevertheless, I removed them all and gave them a wash. 4 sticks of RDRAM coming from the HP Vectra, unable to test them.

To my eyes it's mostly junk but I'm wondering if I'm missing anything there?

Motherboard-wise there was an ASUS P3B-F that I'll keep, and these two horrors: They both have bulging caps, one has a Duron 1000 and the other an Athlon XP1700+. One posts and the other doesn't - at present these are likely candidates for recycling.
I've been unable to figure out how to remove the motherboard from the HP Vecra (doesn't post anyway) and I left the mobo of the compaq in its case out of sheer laziness.

Waiting to hear about your opinions before I do anything with these!

That's an Epox motherboard on the right. Definitely worth saving!

Well.. I wish we had the availability of old cases over here that you apparently have over there.

In any case, that Slot-A Athlon 500 most likely has a 650 core in it. Easy enough to take the casing off and resolder the jumper resisters... even easier if you have a goldfinger device.

As for those motherboards, both of them were quite popular back in the day. The ECS board was more for the budget-y type builds but was still a quite solid board. The Epox board was one of the better boards.

I would save them and recap them.

The cooler on that green Epox Board would definately be of interest to me. Perfect for a Tualatin system.

Epox boards had a great reputation for features, overclocking and stability - until they shot themselves in the foot with crap capacitors like these. If you re-cap. that 8KHA+ is probably the best Via KT266A board you could find.

As for the K7S5A, that was a legend that came out of nowhere. When it first arrived it was both the cheapest and best performing (in most metrics) SoA board out there. Build quality was what you'd expect for the low, low price, but if you were gentle and didn't brick the thing with the infamous floppy vs memory corruption thing on early BIOSs that reared its head when flashing to a newer one, you got a very elegant, trouble-free board. Until the caps went, that is. Later the KT266A (on boards such as the 8KHA+ you've got there) offered better performance, but the K7S5A remained a viable budget board almost to the end of the SoA era.

As for the lot, it's all worth selling... 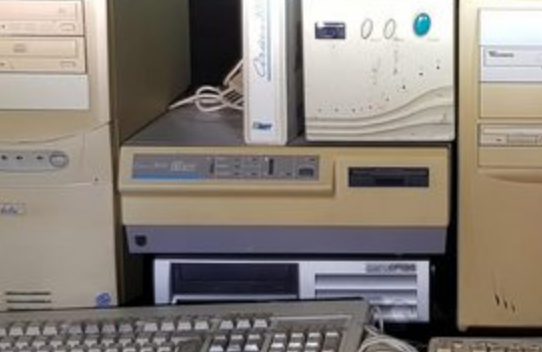 What on earth is that thing?

the compaq second from right to left,
I think if it's the K6 model it's very common (I currently have one of these), the Pentium 3 model using that case is rarer and more interesting (I had one), at least I failed to track down the P3 model recently while I find the k6 all the time.

That's a PC case? I thought that was some kind of dot matrix printer.

I thought that too at first, but at second glance it sure looks like a PC case, a very neat one at that ^^

I'm glad I posted this! Thanks for the heads up - I didn't know these two mobos were actually nice ones. Not having the time or skills to repair them, I'll probably sell them to someone who will have a better use for them.

The case with the green button is the only one I've sold from the lot, it was an AT one and I thought it was worth saving, even though the build quality wasn't the best.

The Athlon 500 CPU came from the Compaq Presario, however since I don't have any other slot A board I won't hang on to it either.

The weird case on top of the desktop Compaq is actually a very odd system - some sort of 1990 terminal designed to send and receive Fax and Telex stuff. Everything is super proprietary, and I have no idea what kind of CPU is even in there. It actually still works - I've advertised it locally but I'm afraid this might end up being recycled as well. I wonder, what would be inside that tower AT case? (Light blue power button and MHz display)

build a modern PC in the compaq presario case

build a modern PC in the compaq presario case

OTOH both boards with bulging caps actually seem to work! Is that a NUBUS slot? This gets even weirder.

I was going to say it looks like a piece of lab gear. I've seen things like gas analyzers and dataloggers that save results to a floppy disk & look like that. But yeah, this is definitely telecom-related... I wonder if it served some job on the Minitel network? Does it boot from ROM or is there a hard drive in there?

OTOH both boards with bulging caps actually seem to work!

Take a look at those voltages. Yes, they're all still within working spec, but all of them are out vs what you'd actually want to have and what the board should be able to deliver reliably. That's your bad caps there.

I'd strongly advise against using these boards for any period of time with these known-bad caps. Worst-case you could get a cascade of failure taking down a MOSFET to the point it could actually melt the PCB. That's not very likely - although I've seen it happen - but less spectacular failures could result in dead boards regardless. For now these boards still work so they deserve new high-quality low-ESR caps ASAP.

Is that a NUBUS slot? This gets even weirder.

I was going to say it looks like a piece of lab gear. I've seen things like gas analyzers and dataloggers that save results to a floppy disk & look like that. But yeah, this is definitely telecom-related... I wonder if it served some job on the Minitel network? Does it boot from ROM or is there a hard drive in there?

It's a 96 pin 3-row connector all right, but in Nubus the connector is much closer to the backplate. If anything this looks like VME. Possibly the rightmost card could be Nubus though...

I can see a few references to Sagem, a well-known French telecoms company up to 2005- but it was already clear this thing was older than that. I wonder whether it might be a Minitel server or similar/