I've been considering trying to find a PCMCIA serial port, and soft mpu supports serial ports. Theres some seral port to midi device on serdashop, so that may be one way to get midi in dos. Not sure I want to go down that rabbit hole or not.

As for the sound you still need a dos driver with the XG theres no way around that.

This laptop is the only laptop I've ever found that attempts to be able to do everything you would want, unfortunatly it doesn't do everything perfectly, however it does better than everything else.

401 and 603 connection slot difference. Interesting that 401 uses a generic mini PCI card and can be replaced with wifi one, while 603 used smth different.

On my laptop I pulled the modem card out becasue who needs that, and left the lan part.

It' could be that on that laptop they managed to wire the sblink in the PCB and on the geforce models they didn't bother to wire the SB-LINK so we require the TSR. Fortunatly the 815 still does pc/pci and we have a modefieid setupds tsr to work with the ICH2 on the 815 which will do ddma in software I guess.

Everything about those specs are great if you can live with the Maestro 3. You probably cant slow it down as much with CPUSPD, since the CPU is so much faster.

I'm still on the hunt for the unicorn laptop, so far this one seems to be the closest thing I can find. If all somone wants is to play 2d dos games then there are much older laptops with native 640x480 screens and 2d only chips with some kinda sbpro compatible isa sound cards in them. They will just be totally constrained to that only and wont be able to play early 3d stuff at a playable framerate or even worst.

Okay, so it sounds like a hardware integration thing.

I'm on the hunt for good laptops too, please post here if you found anything good.
What I want most is a fx5200 go laptops with SB compatible sound.

Never seen ome. Might want to try lookimg for generic stuff l Iike clevos or compals there were others like jetbooks and the like that might have done low cost stuff with VIA chipsets that could have some working VIA AC97 with working sbpro emulation in dos with some not so terroble video controler like a cyberblade. Im sure theres some laptop out there like that. I think ALI and VIA made budget laptop chipset together cyberblade Aladdin IL and it used a VIA southbridge I think.

I known of one light weight laptop with Cyber Aladdin-T chipset, Toshiba Portege 2000(dynabook SS 2000m in Japan), it's very thin and only 1.18kg, with a SB compatible AC97 chip.
There are two problem I am not sure about
1.the cyber blade XP IGP performance. There's a video on Google that compares it with Riva TNT2, both non integrated cards, and the Cyber blade acts like shit. I don't think it will perform any better on a laptop.
2.the laptop itself is XP pre-installed, although Toshiba provided win98 drivers for it, it's hard to install win98 since it's so lightweighted that it has no CD Floppy drive, nor can it boot from USB. Probably a PCMCIA CD-ROM is needed.

Btw Toshiba Portege 3490CT is very much like my satellite pro 4300, Yamaha sound, S3 savage video, and its light weight, about 1.5kg if I remember.
IBM a20p is on my list too, it has a high res LCD and an ATI card equivalent to GeForce 2 go.

When I originally posted about this laptop, I wasn't aware there were more skus. The other skus are basically faster CPU versions that came out after the original version was released. So If anyone is looking for one, becasue I bought another one last night a 603 version

As far as I know all versions are the same except for differen't speed CPUs.

I found a source for new hinges and the proper part numbers for them. Updated the 1st post a lot to reflect changes. While the hinges were broken in the newest laptop I bought last week. I took the time to tear it down completely and take some pictures. 1st thing I notice is the last version which is what this one is does in fact have a socketed PIII on it. Unlike the original version I also have, that one has the CPU soldered to the board as noted in reviews. Thats good news. The bad news is its already 1000Mhz so it's irrelevant as you cant go higher.

Hey I got another laptop the other day, Toshiba 2410 as I said earlier and it have a Geforce4 420Go graphics card and Yamaha YMF753 sound chip. Unfortunately the YMF753 is AC97 and don't have any DOS SB support. Good thing is YMF753 has SB EMU in Win98 DOS window(WDM), and crappy MIDI (general MPU-401). When switch MIDI playback from Microsft GS wavetable to Yamaha AC-XG , the MIDI sound is good (tried WinGroove, not good). BTW The Geforce4 420Go is more powerful than Geforce 2Go and probably capable of more games.
I ordered a Toshiba M200 with FX Go5200 but shit happened, the screen is broken during shipping, dammit. I'm not sure I can find a working FX Go5200 driver for Win98 but I don't have a chance to try and test, for now.

EDIT: tested with some DOS games in 98SE, some old games have no sound setup with driver selection, and in game they only have sound but no music, i.e. Skyroads.
So 2805 series is still the best choice for me. I'll try IBM A20p later, which has a SB compatible sound chip working in DOS.

😀 ya, I have been experimenting a bit lately with the WDM driver for the 2805. And found that after I unistalled the driver. I used uniextract on the cab file, and I can force the device manager to install it as "Yamaha DS-XG Leacy Sound System (WDM)" which is missing from the defualt install. No issues at all and it allows you to change some varables like the input outpot ranges of SB, FM, and GM in software for dosbox not that it matters. It also unlocks Sondius XG tab to enable or disable Synthesizer effects.

I might mod the drivers if I get around to it to do this by defualt. Sinces its way better.

Other experiment I did was use some tricks to install 2 Primary Fat32 Partiotions on the same HDD and 2 copys of 98se. Now I have 1 install with WDM drivers, and One with VXD drivers. So I get better compatibility with games. The VXD drivers, work with PowerYMF so you can use a 4mb wavetable, and work with YMFutilities. While the WDMs don't so there are tradeoffs. WDMS are a lot more forgiving, in dos games that can use dosbox that hate the VXD drivers like duke3d. VXDs work alot better with games that dont flake out like DOOM. Games that use MIDI extensivly if they work with VXDs than VXDs are better.

Anyways theres not another laptop like these. All of the other ones the comprimises are too great. You eiter have bad video, bad audio, or a combination.

Emmm, that's interesting. For 2805 I just installed the WDM driver from Toshiba and then installed VXD from your post without uninstall the WDM one.
For Satellite 2410, I used the driver from Yamaha. The Toshiba driver don't have AC-XG MIDI playback interface, leaving Microsoft GS wavetable only, which is almost useless. The situation is the same on XP too.
I use multiple primary partition on satellite 2410 too, one for 98SE and one for XP. I don't really like dual boot but XP has some good utilities that not available on 98, i.e. USB/PCMCIA boot disk. Also Geforce4 420Go is powerful enough to run XP, it is almost the same as MX440 except a lower GPU frequency.

It's maybe irrelevant to this topic but I wanna ask a simple question about MIDI and synthesizer, what exactly does the software synthesizer do for games? i.e. the Microsoft GS Wavetable Synth for WDM sounds. My understanding is that it transform the notes from musical instrument into audio signal. So different synthesizer may have different quality, tone, ect.
I have compared Microsoft GS Wavetable with Yamaha S-YXG100+, on a AC97 chip in a win98 DOS game and there's not different at all; both sound crippled, and different from YMF744 chip. I thought the Yamaha S-YXG100+ should be close to YMF744, but it turns out not.
the AC-XG synthesizer for YMF753 (AC97), on the other hand, is good and very close the YMF744.
I don't quite understand. and if you happens to know, plz explain a bit, thanks.

ms gs wavetable has roland samples but the quality of the samples is really low, its probably like 1mb quality if that. I don't have any experience with the s-yxg100+ so I cannot comment on it. THe 2mb rom on the XG sounds as good as other 2mb tables i've heard...its not quite as good as like a 4mb Dream/roland though. Powerymf really helps if you have VXDs and use the extended bank. The samples do sound a little differnt from roland samples though. I modded the INFs on both the sounds driver versions WDM and VXD so they didn't add the game port. Becasue it doesn't have a game port and it does nothing. probs upload them later. Theres probs a way to make a rom with roland samples and use it with powerymf, I just don't care enough to do it.

I don't figure any wavetable in the package (maybe its there but I've knowledge about that sorry). Interesting things is that the S-YXG50 drivers for XP works on XP and 98 drivers acts the same as all other soft synthesizer. Maybe its related to the WDM driver / chips itself, as AC-XG soft synthesizer is a part of the Yamaha YMF 753 AC97 WDM, while all the no working soft synthesizer are tested on a ALI M1535B WDM driver with Portege 2000.

Another update: I picked a dead Toshiba Portege M200 with a working display (about 30 bucks) and replaced with the broken one, and it works.
I found the working driver, which I posted to a more relevant thread here: Re: Geforce FX Go 5200 and Windows 98SE - drivers that work?

5200 is a alright chip for retro gaming provided that it's working with 4x.xx modded drivers. 81.xx drivers are kinda yikes, theyll work just fine probably with newer games but anything that is directx 3a or 5 might not work or have glitches. Even though the 5200 should support the features the drivers wont. 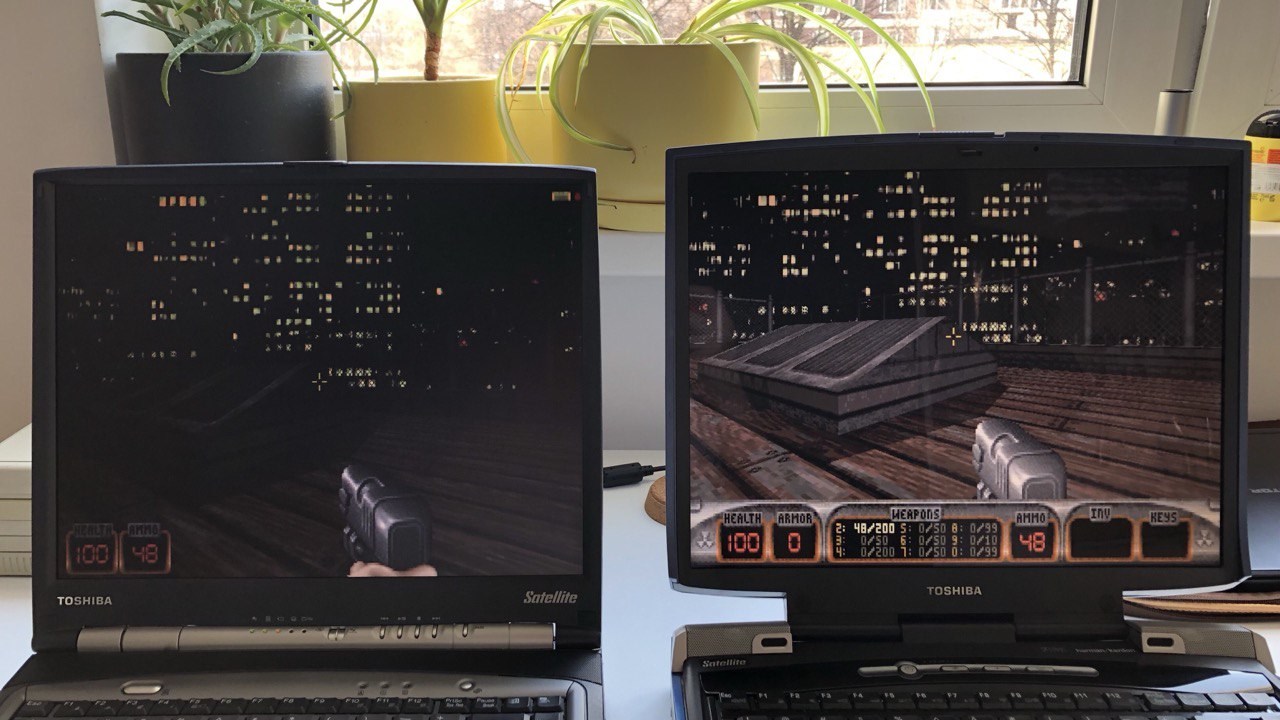 Looks very nice.
BTW one update of 2805: I ran Prince of Persia in 98, music and sound effect plays good but it crashes right on the first sound effect when entering level1, win98 report errors on some address and IRQ 7 (sound blaster irq). I tried play in DOS and the game works fine.
Found a similar thread here: Prince of Persia Sound issues...
Don't know if it is incompatible with 98 system or the sound card/driver.
Another problem I found is the SB music volume is lower than in DOS for some games, and lower than the 98 system, except that the MPU-401 General MIDI is selected.